Trump told "Fox & Friends" he thought Rev. Faith Timmons was "out to sabotage" him: "She was a nervous mess" 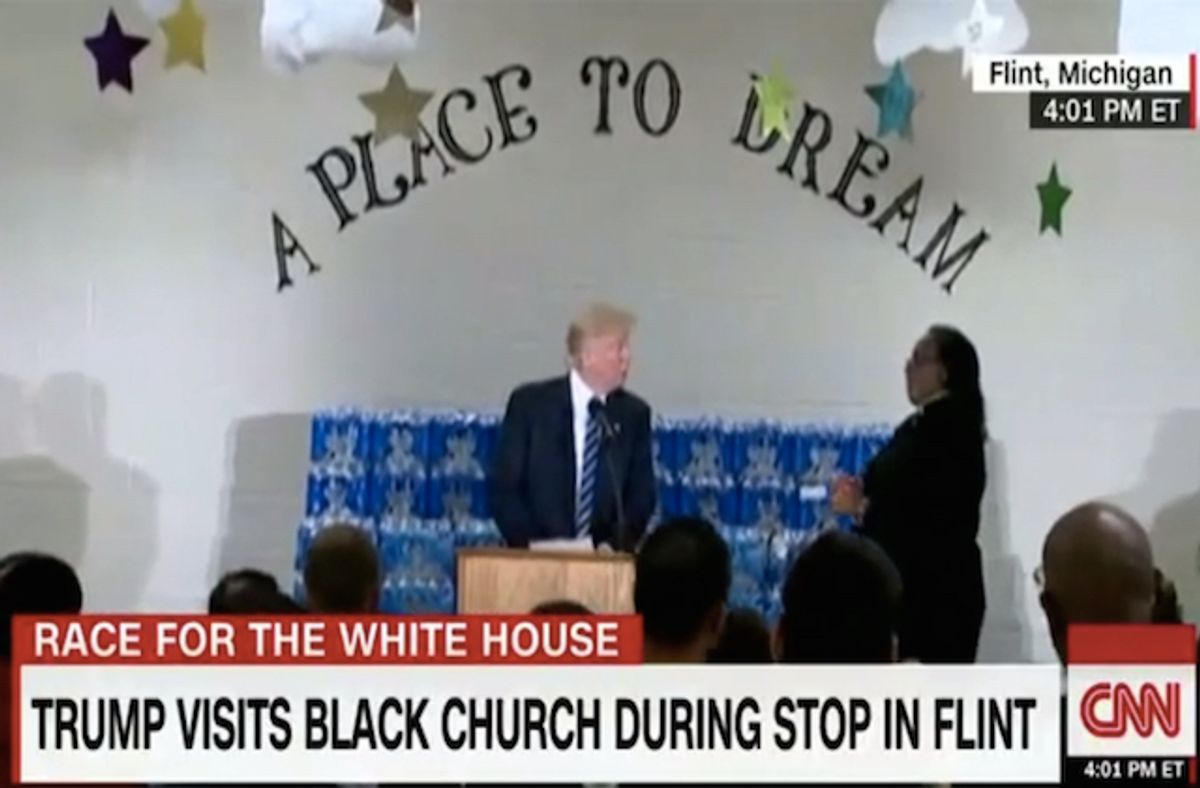 After suffering a public humiliation at the hands of a black woman, Donald Trump decided to start his Thursday by attacking a Christian pastor on Fox News.

The GOP nominee was chastised by Flint, Michigan, pastor during his brief visit to the beleaguered town yesterday after his comments to a small congregation at Bethel United Methodist Church turned into a political attack on Hillary Clinton.

“Hillary failed on the economy. Just like she failed on foreign policy,” he told the gathered crowd, a few of whom had heckled him. “Everything she touched didn’t work out,” he continued. “Nothing.”

At that point, Rev. Faith Green Timmons interjected: “Mr. Trump, I invited you here to thank us for what we’ve done in Flint, not give a political speech.”

Flint pastor interrupts Trump: I didn't invite you to "give a political speech." https://t.co/VB1eN28c0U

Asked about the embarrassing rebuke that went viral on Fox News Thursday morning, Trump showed considerably less tact than he had displayed in front of the reverend.

"Well, I was in Flint yesterday and it was a very interesting experience and got unbelievably good treatment from people, I must say, and even in that audience, the treatment was great," Trump told the "Fox & Friends" hosts, dismissing reports of hecklers prodding him about his history of racial discrimination.

Citing the pastor's Facebook post, co-host Steve Doocy asked Trump if he believed he was set-up by the historically black church.

“Something was up,” Trump agreed. “She had that in mind, there’s no question about it.” “She was shaking!' Trump continued. "And I said, ‘Wow, this is sort of strange,’ and then she came up.”

"Does it bother you?" co-host Brian Kilmeade asked Trump.

"I'll tell you what really made me feel good," he continued, "the audience was saying, ‘Let him speak, let him speak.’ The audience was so great and these are mostly African-American people, phenomenal people and they want to see change.”

According to MLive.com, Rev. Green had actually quieted down congregants who shouted questions at Trump as he spoke. She explained her decision to invite Trump to her church to reporters after the event:

Later on Fox News,  Trump even took aim at the city residents he had ostensibly come to woo.

"You have to see the crime rate over there is ridiculous," Trump told Fox News. "The whole place is – not only the water, the water is what – what they did with the water is horrible, but the crime rate and all the other problems they have and people want to see – you know when I use the expression, I say what do you have to lose? I'm going to fix it. I'm going to fix it. What do you have to lose? And I'll tell you the audience was fantastic":

After failing to address the Flint Water crisis for months (when asked in January, he would only offer that it was a "shame"), Trump is now making the poisoning of an American town an applause line in his stump speech: