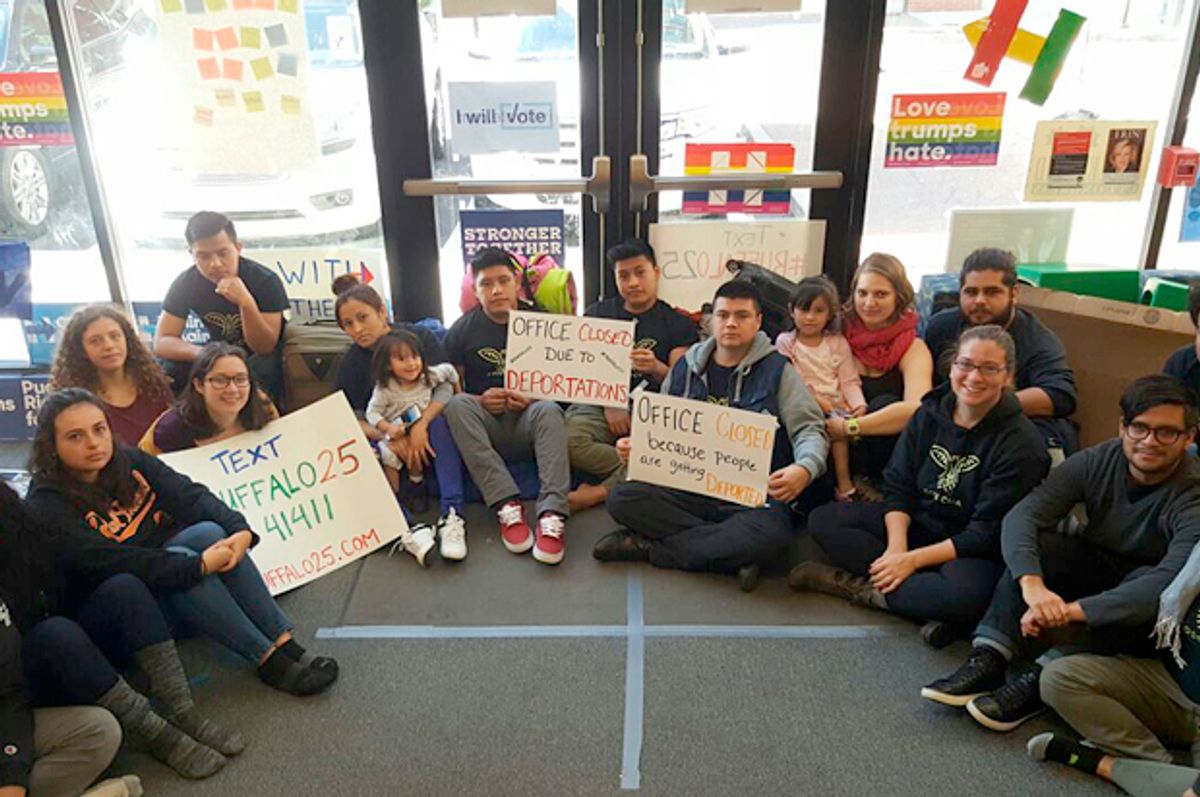 A group of 20 migrant justice activists occupied Hillary Clinton's campaign office in Pittsburgh on Thursday night, demanding that the Democratic presidential nominee call for an end to record-breaking deportations and raids.

The activists, who call themselves #Buffalo25, brought sleeping bags and spent the night in the office. A spokesperson told Salon on Friday morning that they are still occupying the office.

#Buffalo25 is currently occupying .@HillaryClinton campaign office in Pittburgh, PA. We demand an immediate halt to their deportation pic.twitter.com/W3KKL9GnVH

#Buffalo25 is a campaign created by the immigrant rights group Movimiento Cosecha in order to bring national attention to recent ICE raids in Buffalo, New York.

Thais Marques, a volunteer organizer for Movimiento Cosecha, said that several activists came into the Clinton campaign office around 5 p.m. on Thursday, posing as volunteers. An hour later, more activists from the Cosecha Movement came in with five of the workers who were affected by the Buffalo raids, including four who are forced to wear ankle bracelet monitors.

“We sat in front of the doors and started singing,” Marques said. “Then some of the Buffalo 25 began sharing their stories — what happened during the raid, how it is affecting their families and what we are asking of the Clinton campaign.”

The activists posted a live-stream video of their occupation.

The regional staff of the Clinton campaign remained in the office, Marques told Salon. They shut down the office on Thursday night and all day on Friday.

“They would rather close down their office than have people listen to the pain of the Buffalo25,” Marques said.

Likewise, activist Maria Cabello argued that Hillary Clinton “would rather close her campaign office than protect the undocumented workers of New York.”

@HillaryClinton would rather close her campaign office than protect the undocumented workers of NewYork #Buffalo25 @CosechaMovement @maddow pic.twitter.com/HscHVv08QI

Salon reached out to the Clinton campaign for comment, but did not receive a response.

In late October, federal agents raided four popular Mexican restaurants in Buffalo, New York, arresting 25 employees. At least seven now face deportation. This was one of the largest workplace raids that has taken place under the Obama administration. The Obama administration has deported nearly 3 million migrants and refugees, more than any other president.

In April 2009, however, the Obama administration halted the use of mass workplace raids, which had been conducted by ICE under George W. Bush's administration. The Buffalo raids appeared to signal a return to the practices of the Bush era.

Migrants targeted in the Buffalo raids are facing detention and deportation. The Cosecha Movement says they are being punished “for the crime of working, when the truth is the entire restaurant industry depends on the labor of undocumented workers.”

“When ICE came they took my children away from me and gave them to a foster family. I thought I would never be able to see them again,” Aida Ramirez Arellano, one of the affected workers, said in a statement. “Now they are back with me but everyday they ask to see their dad. I do not know what will happen to them if I am deported.”

"Waiting= Another day without my father" #Buffalo25 shutting down Hillary's campaign office in Pittsburgh, @NBCLatino pic.twitter.com/foeBY1LTk8

The sit-in protest in the Clinton campaign office is part of a six-day caravan activists have organized from New York to Ohio. The Cosecha Movement said that its goal is “to bring to light the daily reality of our immigration system, in an election that has not done justice to the real challenges our communities are facing.”

Four of the workers joining the caravan are currently wearing ankle monitors. They are calling for the Clinton campaign to release a public statement condemning the raids.

“Some of us from Cosecha came up to do rapid response when we heard about the raid — to help fund-raise, do legal support and help publicly flight the deportations,” Marques said.

She noted that Cosecha has been organizing with the whole community affected by the raid, but five workers who were impacted decided to join them in the protest.

“We refuse to allow this election to end without bringing the pain of the immigrant community back into the election spotlight and amplify their demands for permanent protection, dignity, and respect,” Marques further explained in a statement.

“We have been told to wait until after the election — the children of the Buffalo 25 can’t wait,” she added. “Each day that passes by is another day that 2-year-old Meriline and 4-year-old Angelique can’t see their father.”