“I’m mad as hell and I’m not going to take it anymore!”: Understanding anger in the Donald Trump era 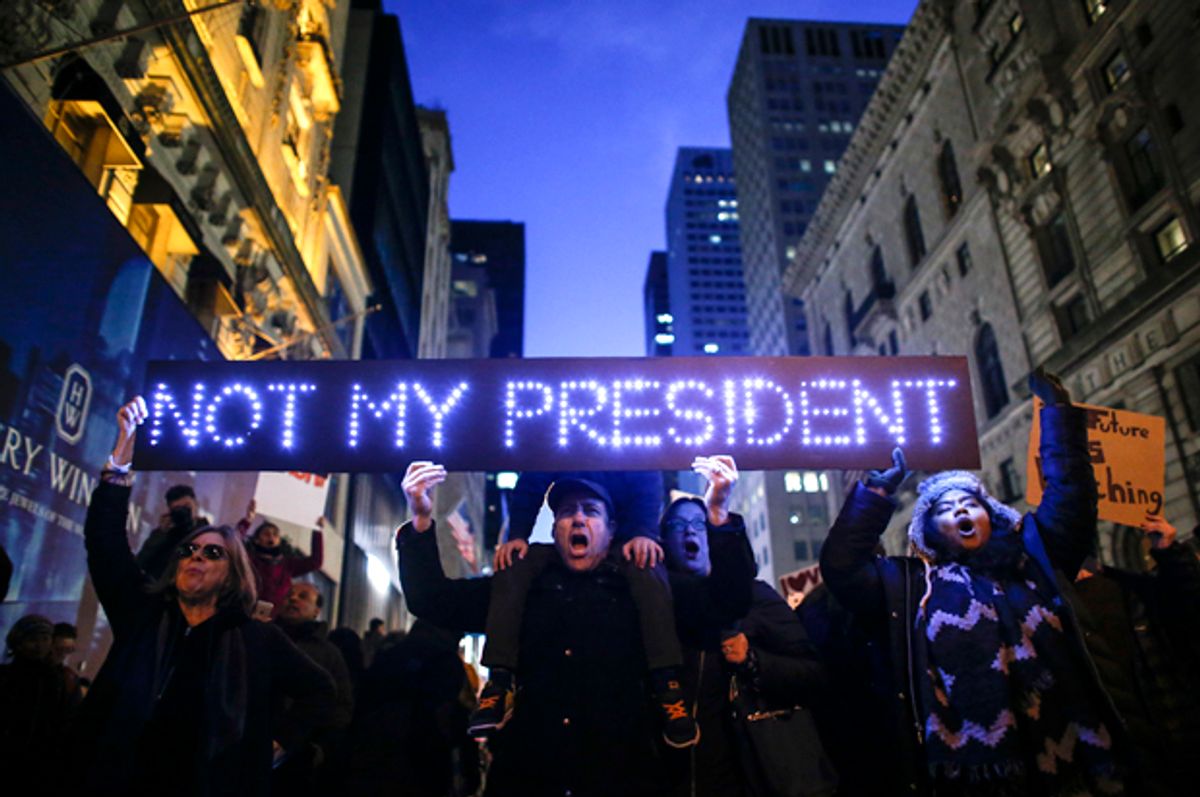 The Thanksgiving turkey has been served, and with any luck, you made it through the family meal without getting into a vicious fight with your Trump-loving uncle. Or maybe you ignored all of the advice columns and let him have it. As we headed into the holiday weekend we heard an endless series of advice about how to avoid a post-election family meltdown. We were told to “learn to listen” and to gently “redirect” conversation away from hot topics. It’s all good advice when thinking about how to avoid a total family meltdown. But those columns focus on helping us navigate four difficult days. They are of virtually no use for those of us trying to figure out how to make it through four difficult years.

We have heard that the word of the year is “post-truth,” but perhaps most importantly, the mood of the year is anger. The post-truth world takes on frightening proportions because it is wrapped in anger. That means it’s time to do some anger management.

We are all pretty pissed. Reports of upsurges in anger come at us from all corners. Literally everyone seems angrier — even those whose candidate won. Heather Digby Parton describes what she calls “sore winner syndrome.” She recounts a story of a male Trump supporter punching a woman in the face in Brooklyn because he was angry that she was complaining about Trump’s victory.

Meanwhile there has been plenty of anger on the side of those whose candidates lost. As protests developed across the country, we heard that we needed to respect the democratic process and give Trump a chance.

All that did was piss everyone off more. Leonard Pitts Jr. channeled those frustrations when he explained that, under these conditions, “I have no interest in seeing this country heal. And I refuse to come together.” His point was that the post-election anger was not about policy; it was about refusing to forget that Trump has no business being president:

My anger is not about any given policy of the new president. No, it is about him, about the election of a fundamentally unsound, unserious and unfit man, a misogynist who brags about sexual assault, a bigot cheered to victory by the Ku Klux Klan. I have no idea how to “heal” woman hating and no desire to “come together” with the Klan.

Here’s the thing. It would be easy to say one type of anger is good and the other is bad. It would be super convenient if we could just say that Trump supporters need to stop being angry, so we can be. But that plan isn’t going to work, and here’s why.

We need to remember that Trump may have been one of the angriest candidates we have seen in recent years, but Bernie Sanders was plenty pissed too. The key difference is that Trump marshaled the anger flowing at his rallies into hatred of specific groups of people, whereas Sanders hoped to organize his supporters towards revolution. Trump famously tapped into voters’ anger and resentment. But Sanders supporters (some of whom got behind Stein) had their own anger too.

Validating the legitimate anger of Trump supporters was at the heart of Michael Moore’s film “Michael Moore in Trumpland.” Before and after the film’s release, Moore cautioned those of us on the left who refused to acknowledge the righteous anger coming from Trump supporters. Salon's Amanda Marcotte is right that much of the white male anger that boosted Trump to victory was real but not valid. And she is right that we have absolutely no reason to offer empathy to racist, misogynist bigots. But it is a mistake to lump all of the Trump anger into a backlash on political correctness.

Part of our problem has been that we have mapped the anger brewing over this election too closely to the race itself. But anger has been a constant part of our daily diet in this nation for decades. Hate crimes may have spiked since the election, but the overall hate crime rates have been fairly steady for the last decade.

And don’t forget our own homegrown neologism, “road rage” — a term that was coined in Los Angeles in 1987 in response to freeway shootings. Anger management therapies may date back to the 1970s, but they really started to gain traction in the 1980s, when the nation started to embrace neoliberal economic policies. There is a real link between the rise in anger and the establishment of neoliberal policies that privileged profit over people.

While we now know that many Trump supporters themselves had not suffered economic hardship, it would be a mistake to ignore the very real role that neoliberalism has played in creating the anger we have today. Neoliberalism does more than create an economic system of deregulation and privatization, it offers up a whole way of being. Neoliberalism has also worked to privatize anger, to turn the political into the personal. Private anger replaces political struggle. Personal anguish replaces productive political fights.

Even more important, neoliberalism affects us all, regardless of whether or not we are economically suffering. The core of neoliberalism is the destruction of a common good, of shared community, and of collective values. It produces privatized resentment and tries to foreclose politically productive fury.

In response to the disintegration of the social fabric caused by neoliberalism, we saw increased calls for civility. Civility in the face of bigotry and hate seems like a good idea — and a much needed one for a democracy. But civility is about as slippery a concept as anger. As David Palumbo Liu points out, civility is used all the time to repress dissent. Calls for civility are often a cover for censorship. While we don’t want to give up on the idea of civil society, we should recognize that it is often those in power who use the idea of civility to threaten the very idea of civil society itself.

It gets even messier. We also live in an era of mass-mediated manufactured anger. Trump couldn’t have come to power without tapping into the legacy of the Fox News hate machine. What used to pass for news is now just a bunch of angry vitriol that alternates between scaring viewers and getting them riled up.

And that leads me to one of the best complex treatments of anger in US movie history. "Network" was directed by Sidney Lumet and released in 1976. The film focuses on Howard Beale, an anchor for a network channel that is suffering a ratings drop. When he's told that he has to leave the air, he has an outburst that perfectly sums up the weird mix of good and bad anger we are all feeling:

The Beale rant reminds us that our anger issues have a long history, but it also reminds us that productive political anger is often inextricably mixed with personal frustration and resentment. All Beale wants is to stay on air, so he encourages his audience to begin with anger at the system but end by doing nothing more than shout in the streets. Similarly to Trump, he offers no meaningful outlet, just an unleashed rage that he can use for personal gain.

The Beale rant also reminds us that one way to disentangle productive anger from its destructive cousin is to consider where the anger comes from and what its goals are. There is a real difference between righteous anger and toxic resentment. Anger is the feeling produced when one feels offended or wronged. Righteous anger of the sort Sanders stoked is an essential feature of any real political movement. Anger is what is keeping the protesters at Standing Rock out there in the cold and under duress. Anger is what helps people stand up and fight against a president who threatens to destroy our core values.

But anger can morph quickly into rage. Rage is anger with the intent to destroy or retaliate or cause harm. “Unlike anger, rage is an intricate mix of fear, desperation, anger and panic.” Rage happens when political anger has no hope.

This is all to say that we can’t really neatly divide the good angry people from the bad ones. Sure, we have stories of the rabid Trump supporter who attacks someone. Those stories stoke our desire to feel justified in our anger. We can also choose to dismiss stories of Trump supporters being attacked as random acts of violence.

But if we do that, we miss the larger reality. Sometimes righteous anger morphs into destructive rage. And sometimes bigoted hate is also mixed with legitimate frustration.

As we gear up for a Trump administration, anger isn't going away any faster than post-truth. Our job will be to fight to maintain a distinction between justifiable anger and personal temper tantrums. There simply isn’t going to be a political litmus test for anger that will help us decide who gets to be mad and who needs a time out.