Don't look now: It's President Pence! Donald Trump can be deposed, even without impeachment

Given Trump's erratic behavior in his first few days, Washington is starting to murmur about the 25th Amendment 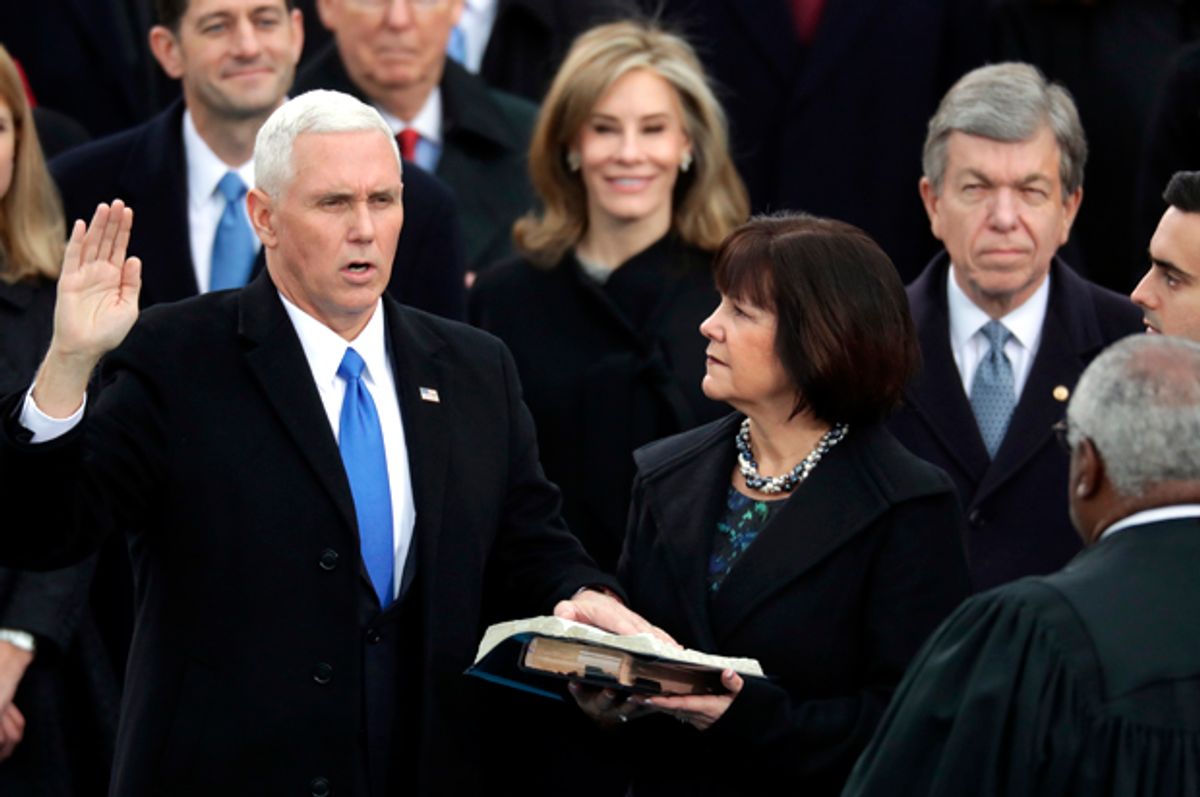 Salon video produced by Kevin Carlin. This story has been corrected since it was originally published.

Donald Trump is in over his head. This comes as no surprise to the millions of people who could see that he was unprepared and unfit for the job of president of the United States and voted against him. He's basically a celebrity heir to a fortune who was so entitled that he believed his privileged existence proved he was competent to run the most powerful nation on Earth. That's the attitude of an aristocrat who ascended to the throne without having any idea what it actually takes to rule. History's full of such men. It doesn't often work out well.

Trump managed to convince enough voters in just the right places that his "business success," born mostly of hype and relentless public relations over many years, qualified him for the Oval Office. Since the Protestant work ethic and the philosophy of virtuous capitalism still permeate American culture, it's not uncommon for people to equate financial success with superior intelligence and character. Many individuals among the public undoubtedly assumed that Trump's persona at the rallies was somewhat of a salesman's act, that he was playing the role of demagogue to rile up the crowd. They assumed that behind closed doors he was a smart and able businessman, making tough decisions on the fly, handling many issues at once.

Those voters did not see what millions of others felt instinctively and that explains the shocked reaction and immediate resistance to his election: Trump's incessant bragging, his lack of empathy or remorse, his pathological lying and even his bizarre appearance have been signs of an unstable personality. It was obvious to many of us that something was not right.

The presidential transition was a dumpster fire with endless resignations, rumors and public humiliations. Trump's refusal to deal responsibly with the intelligence community's investigations of Russian interference in the campaign was worrisome. Picking a fight with the intelligence community over this was downright alarming. Still, one couldn't help but think that the weight of the job might inspire Trump's staff and the people close to him to instill some discipline into the system and keep the new president focused once he took the wheel. That hasn't happened. The first days of the new administration have been a disaster.

From last Saturday through Tuesday night, it's been one surreal event after another, starting with Trump's visit to the CIA headquarters where he stood in front of the Memorial Wall — marked with 117 stars honoring agents who have died in the line of duty — and acted like he was at a rally in a high school gym in Indiana.

He didn't seem to have a clue that he was being inappropriate. He compounded the bad impression by sending out his press secretary Sean Spicer to insist that the crowd for his inauguration was bigger than any in history. When Kellyanne Conway defended Spicer by saying he had simply offered "alternative facts," members of the media were stunned. It's not that they assume officials always tell the truth. But they were clearly shocked that the White House would chastise them for reporting something that was obviously and provably correct.

When the president was reported to have told congressional leaders on Monday that he still believed 3 million to 5 million illegal votes had been cast in the election, causing him to lose the popular vote to Hillary Clinton, it became clear that Trump's erratic behavior was not stopping. Leaks have been pouring out from inside the nascent administration, giving a picture of an insecure, irrational man who is obsessed with his image and little else.

According to an article in The Washington Post, Trump's inner circle is overwhelmed by power struggles and internecine battles while the president fulminates over every criticism. The New York Times has reported that his staff is concerned about his "simmering resentment" at what he thinks is unfair press coverage. Politico has reported that aides are trying to minimize his incessant TV viewing, and according to a report by Axios, Trump is running his administration almost entirely in reaction to what he sees in the media. He sounds as if he is unable to handle the stress and is using avoidance mechanisms.

So what happens if President Trump cannot pull himself together and continues to psychologically unravel? There is a remedy other than impeachment. Even conservatives like David Frum have been talking about it for a while:

The 25th Amendment was added to the Constitution after the assassination of John F. Kennedy and provides for the replacement of the vice president if the office becomes vacant. (So it led indirectly to the presidency of Gerald Ford, the only American president who was never elected to any executive office.) But Section 4 is about something else entirely:

A temporary transfer of power has happened a handful of times since the Kennedy assassination, once when Ronald Reagan had cancer surgery and twice when George W. Bush underwent colonoscopies. Most people have thought of the 25th Amendment as a way to deal with a president who has had a heart attack or a stroke and has become incapacitated, as Woodrow Wilson did, with his wife effectively assuming the duties of the presidency for the remainder of his term.

But the language of the amendment clearly encompasses other scenarios besides physical incapacitation. This topic was a subject of discussion toward the end of the Reagan administration, when it became obvious that the president was suffering a loss of cognitive ability. It wasn't invoked then but as we now know, Reagan was indeed suffering from the early stages of Alzheimer's disease. Had it become more acute or obvious while he was in office, Congress might well have had to take action as laid out in the amendment.

It's obvious that Trump has a narcissistic personality, which in itself is not disqualifying. He's not the first president to have one; nor will he be the last. But his issues seem to run deeper than that. Some observers have suggested that he shows the characteristics of classic psychopathy. And there are plenty of people who see his behavior as blatantly self-destructive.

Of course it's an extreme long shot that members of Trump's Cabinet or the Republican leadership in Congress would ever take such a drastic step. (Although it's not at all hard to imagine that in their hearts many of them would prefer President Mike Pence.) This would only happen if  Trump really started to behave in a unhinged fashion. After all the bizarre behavior he has exhibited over the past 18 months, one cannot help but wonder: What could possibly count as going too far? It's almost too terrifying to imagine.