The Super Bowl’s big queer milestone: Lady Gaga was the first singer to reference LGBT people during a halftime show 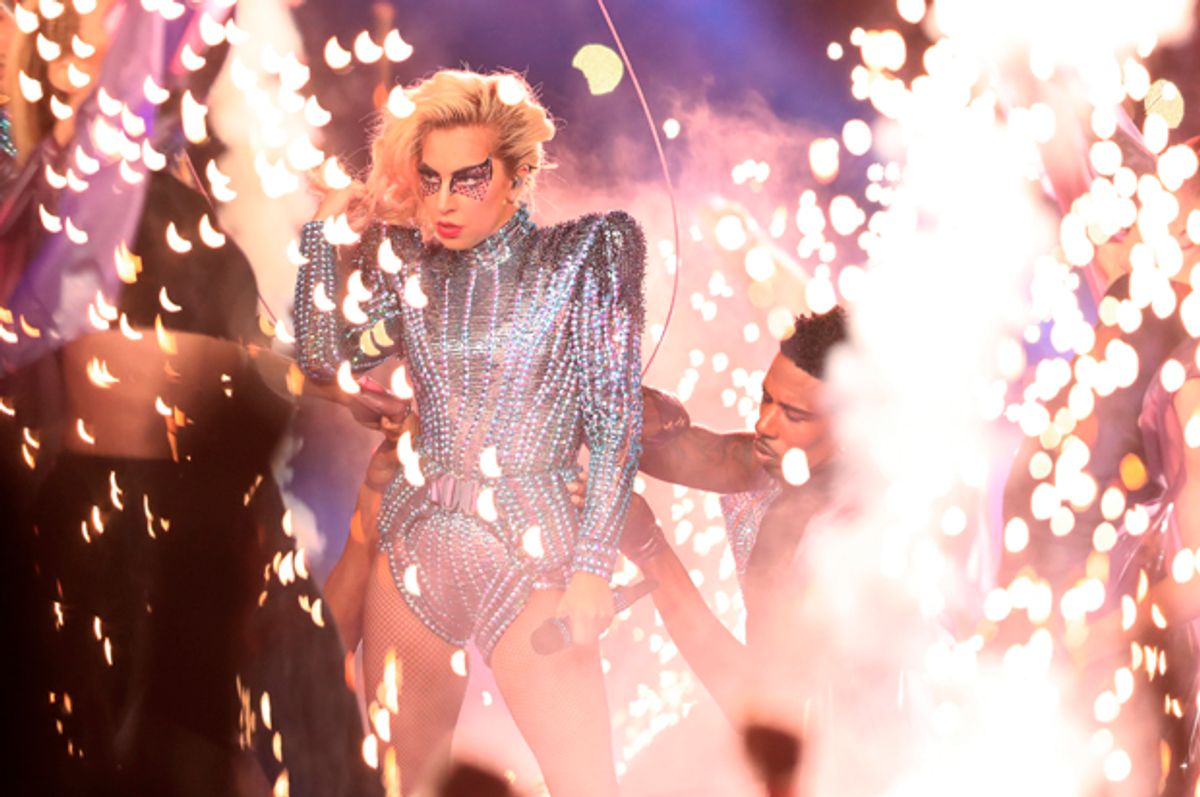 It’s a sign of how far we’ve come that an openly bisexual singer name-dropped the LGBT community during the biggest television event of the year although everyone’s asking why she didn’t get political.

A year after Beyoncé brought out 30 women in Black Panther hats to protest police brutality, some speculated that Lady Gaga, a Hilary Clinton supporter, would use the Super Bowl platform to critique Donald Trump. After Trump's surprise win in the election, Lady Gaga tweeted that the current president “empowered racist intolerant Americans” and led a one-woman protest of his xenophobic, anti-immigrant platform in front of the Trump Tower. Hanging from the side of a sanitation truck, the singer (née Stefani Germanotta) held a sign that testified to the message of inclusion she preaches in her music: “Love trumps hate.”

At the gentle but firm insistance of the National Football League, Gaga did not mention Trump by name in her performance last night. Although Mark Quenzel, the senior vice president of programming and production for the NFL, claimed he didn’t tell the pop icon not to discuss politics, the writing was pretty much on the wall. Here’s what Quenzel told Billboard magazine about the halftime show, which he said is intended to be a “celebration.”

“We have no discussions about her or with her that have to do with the election, or the president,” Quenzel said. “What we say to every artist, very clearly, and they all buy in: The Super Bowl halftime is the biggest musical event of the year, and it’s also a communal event for fans, the Super Bowl itself. People get together as families, as friends. It’s a unifying day for people built around the biggest sporting event in the world. . . . Anything that detracts from that is not something that we should be focusing on.”

Many fans were disappointed that the 30-year-old, who famously wore a meat dress to protest “Don’t Ask, Don’t Tell,” didn’t take on the POTUS. But they must not have been watching the same halftime show that I was.

When Lady Gaga first appeared on the roof of Houston’s NRG Stadium dressed in a sparkly sequin onesie, she quickly segued from singing “God Bless America” into Woody Guthrie’s “This Land Is Your Land.” The classic protest anthem was written in response to the labor camps, widespread famine and indifference to the plight of the poor and marginalized that Guthrie had witnessed during the Depression, and it became a staple of the Women’s Marches across the country following Trump's inauguration. Its sixth verse, which is often omitted, contains a direct reference to immigration: “There was a big high wall there that tried to stop me/ The sign was painted, said ‘Private Property’/ But on the backside, it didn’t say nothing/ This land was made for you and me.”

Vanity Fair called Gaga’s song choice a “dog whistle” to Trump’s stated plans to build a wall between the United States and Mexico and his signing of a Jan. 15 executive order to move forward with its construction. Budweiser and Lumber 84 both referenced the POTUS’ immigration policies in their commercials. The latter one, which was not allowed to air in its entirety, showed a mother and her young daughter traveling to America in pursuit of a better life only to encounter a giant barrier as they attempted to cross the border.

But you didn’t need to look for coded clues to grasp the message of Gaga’s halftime performance. The singer, who performed a medley of her hits, spent the most time on “Born This Way,” the 2011 ode to LGBT acceptance that went No. 1 in 25 countries. Her singing its lyrics made Gaga the first person to ever say the words “lesbian,” “gay,” “bi,” or “transgender” at the Super Bowl:

Whether you're broke or evergreen

You're Lebanese, you're Orient

Left you outcast, bullied, or teased

Rejoice and love yourself today

'Cause, baby, you were born this way

No matter gay, straight, or bi

That’s a small but crucial milestone: About 100 million people watch the Super Bowl each year, including the president of the United States. Trump, who is a New England Patriots fan, tuned into the game and saw his close personal friend, Tom Brady, win a fifth ring. The POTUS was not present, but he did tweet about the game. The person who did attend the championship match, in which the New England Patriots overcame a 25-point deficit to win in overtime, was Mike Pence. The crowd cam briefly caught the vice president scowling in disapproval prior to the Patriots’ comeback.

I wish the camera, however, had captured a glimpse of his reaction during Gaga’s performance. During his time as the governor of Indiana, Pence was the architect of a law targeting the LGBT community for discrimination. His Religious Freedom Restoration Act made it legal for businesses to deny services to people based on their sexual orientation or gender identity, as long as the refusal is motivated by faith. He has further supported redirecting funds from the Ryan White Care Act, a national HIV program, to conversion therapy.

Meanwhile, Trump nearly signed an executive order last week that would have made discrimination against the LGBT community the law of the land. That order, which would have granted sweeping religious exemptions to federal agencies, businesses,and health care providers, was reportedly scuttled by Ivanka Trump, the president’s daughter, and her husband, Jared Kushner. The POTUS has not stated whether he will pursue the executive order in the future.

Putting LGBT issues on the main stage at the Super Bowl served as a powerful message of queer solidarity in the face on an unprecedented wave of challenges from our government. As the White House threatens to roll back protections for trans students and pass a nationwide “religious liberty” bill targeting LGBT people, many of the commercials served as a testament to the community’s resilience. The ad for Google Home, one of the first to air during the game, prominently featured a gay pride flag in its first few seconds. #WeAccept, a commercial from Airbnb taking aim at Trump’s travel ban, referenced gay rights in its words "no matter who . . . you love"

Anyone who wanted to hear that celebration of love and inclusion, though, needed to only pay attention to Lady Gaga’s performance. “I was born to survive,” she sang on Sunday night. The LGBT community has made such extraordinary progress in the last six years that many viewers overlooked why those words are more important than ever. Under the new administration, we are still fighting not only for our rights but our survival.