The Moth's artistic director on the storyteller inside us all: "Most people do have something beautiful to say"

Salon talks to Catherine Burns about the new book from the iconic storytelling project, "All These Wonders" 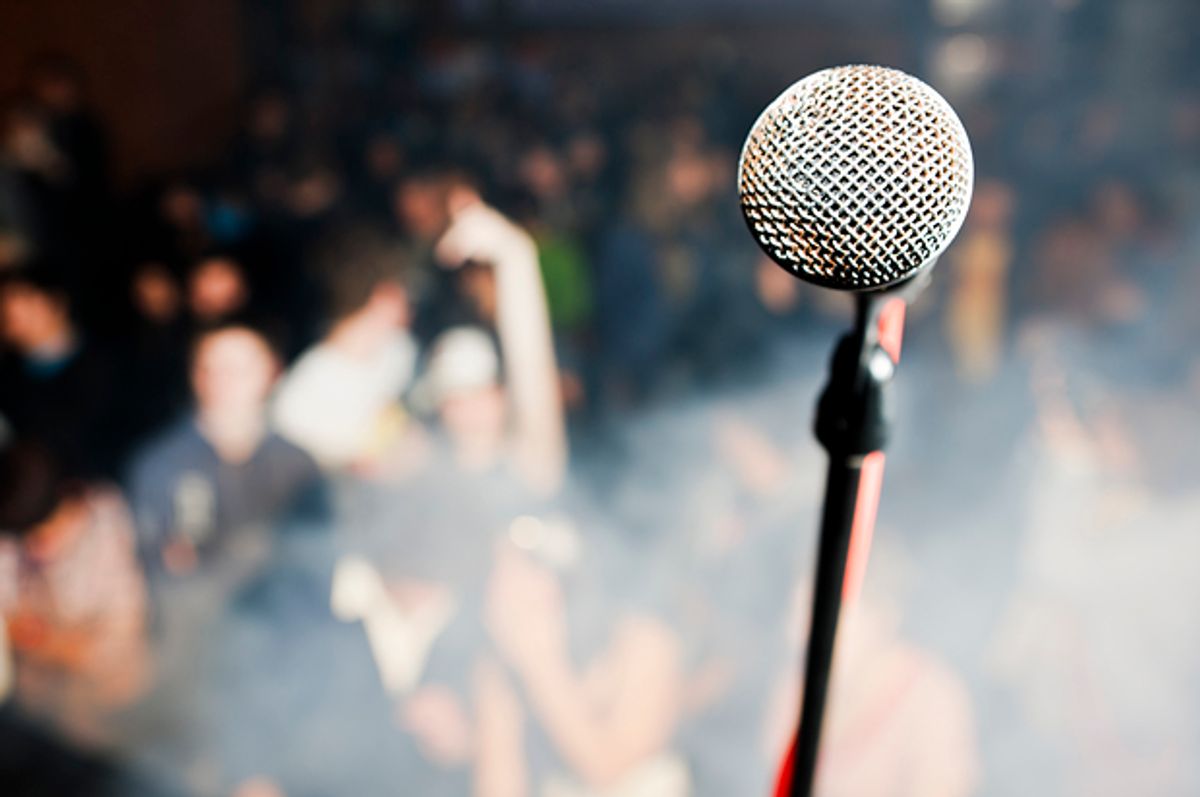 In its remarkable 20 years of existence, The Moth has grown from a small New York City storytelling show to a worldwide organization, beloved podcast and now, inspiration for a new book. As with The Moth's first collection, "All These Wonders" is edited by its artistic director Catherine Burns, but this time all the tales are tied together around the theme of facing the unknown.

Taking its title from a story by planetary scientist Cathy Olkin, "All These Wonders" is a journey through the mysteries of the unexpected — whether they're on the other side of the solar system or just on the other side of our own front door. And though it includes pieces from more well-known Moth alums like Tig Notaro, John Turturro and Louis C.K., every tale is its own surprising glimpse into the human story. I talked to Burns recently about the power of storytelling, the intimacy of a single voice and why we're hardwired to hear them. Portions of the interview have been condensed for clarity.

Why take The Moth, this thing that is so much about the storytelling, and even do a book?

This is actually what we said for years, and that’s why we didn’t do a book until just a few years ago. There was interest in it on and off over the years, but what made me want to do it was actually our literary agent. He wasn’t even our agent at the time, he was just a literary agent who came to The Moth a lot and was really sweet to us. He was like, “What if you actually transcribed the stories, instead of rewriting the stories for the page, and edited them in a way that preserves the aliveness?” You want to have it be a book that’s capturing something that started out alive. And that appealed to me because one of the things we had learned from doing the radio shows was that we'd get the stories transcribed. What we discovered in reading them is that some really, really worked on the page in this way that we would have never anticipated. That made me feel like, yeah, we’ve had so many stories told, I think we can come up with 50 that really work on the page, and it would be another way for people to experience the stories.

I think that’s exactly right, and that’s part of why we picked it. We were trying to figure out what the stories that we love the most had in common, and facing the unknown became one the of the through lines that we kept noticing: that idea of going off the map, either by choice or sometimes because you got shoved there — and then finding the strength to be in this new space. We just also love the word "wonder."

We put this book to bed long, long before the election and some of the things that have happened in the country. We feel like the timing is good, that we all need a little wonder right now. I think that a lot of people feel like they’re facing the unknown, no matter what side of the political line you’re on. I’m from a small town in Alabama and so I know a lot of people from different sides of the political divide, and there’s been a feeling that we’re in unknown territory in this country.

This is a book that’s very much about what happens when things change and how you accept them and how you change them. What did you do to take the reader on this thematic journey?

We actually sort of obsessed with order at The Moth. If you’re going to one of our live shows, we agonize over the order because we know that the order of the stories can sometimes make or break how you perceive the show. You also always want those stories to complement each other. You want to make sure that the serious ones and the funny ones are spread out so you don’t have seven heartbreaking stories in a row.

We also spend a lot of time thinking, “Where do we want to start people?” Tara Clancy is someone who’s just so quintessentially Moth. There’s something about her, just this girl growing up in Queens like an ordinary girl who was actually quite extraordinary, finding the magic in the world through this guy her mom starts dating. Then we end with [the late comic, writer and actor] Taylor Negron. We just loved the idea of the very last line being about how your whole life can change by opening a door. We loved the idea of ending with Taylor’s joy, sending people off into the night with that.

We have categories of stories. Some of the headliners in the book tell some of the best stories that have been told in the last few years, but people don’t come to The Moth just for headliners. I think people come to The Moth to discover new voices, so we wanted to make sure that that was very balanced. We also looked at men and women, trying to have a balance there. Racial diversity and age diversity are two things that are very important to us, making sure that we have Hector Black, who’s in his nineties, and Hasan Minhaj, who’s younger. That felt really important. We love Hector. That whole idea of, "Can't we all use a little bit of forgiveness and find forgiveness for each other?" feels so relevant right now in the world.

We also were trying to represent some of The Moth programs that we’re proud of. There’s several people in the book who actually called our pitchline out of the blue and ended up telling these beautiful stories. We were so proud that Christian Garland ended up in the book. He’s from our high school story slam program and he won the very first New York City high school story slam. So it meant a lot to us that we were able to get one of the stories from the kids to work.

But we really did want to take people in a journey in that we try after the heavy stories to then take you out to something maybe a little bit lighter just so we don’t kill you.

My friend Larry Smith's Six Words project says that "Everyone has a story." But is that true? Does everyone have a story?

I don't know. That used to be one of our mottos too in the early days. We think that most people have some core story, something's just extremely true about them, that they could tell, that would be beautiful. Would they be a raconteur like George Plimpton? Probably not. One of these things we say at The Moth is that we're really trying to find the story about how you became you. We know it's a tall order but that there's truth in that, and everyone has that, has stories like that from their life. Will everyone find them and tell them in front of a crowd? Maybe not. But I think that most people, if you talk to them and listen very carefully, there are beautiful things. Everyone has something beautiful to say. We find that again and again.

We do these workshops for our community program where we work with people. The goal of that program isn’t necessarily to get them up on stage to tell their perfect story; the goal of that program is for them to just have the experience of finding a story and working it out and then telling it in the room. The actual experience of what they go through is the point, not the final, final effort. It's a little bit different from the main stage where in the end it's about the final moment in front of the crowd. After so many people going to that program, we found that most people do have something beautiful to say if you give them a chance.

What is it about this need that we have not to just tell our stories but to listen to them? I spent the weekend binging "S-Town" and I was mesmerized. I'm thinking about what is it that we are so drawn to storytelling, especially now with the rise of podcasts. It's really one of the best things that's happened in culture in maybe the last decade. So many of us are just hooked on hearing people telling their stories in their own voices.

I totally agree. One thing is the whole storytelling movement — and it's not just The Moth — but I think one of the things that we love is how The Moth has inspired thousands and thousands of storytelling organizations and shows around the world. It's so exciting to see, and some of them have slightly different formats and are just really fun and it's thrilling. And I don't think there's any surprise the modern storytelling movement rose up hand in hand with the internet and technology, and everyone having a computer.

You don't go to the movies anymore with other people. You sit at home and watch when it comes out on demand on your TV. I think that we are creatures who want to be around each other, for better or for worse, and so it's not surprising that something has risen up that involves people going out, sitting in a room and listening to, in many cases, their neighbors tell stories. Even if you're listening to it on a headset, there is an intimacy to that. We always like to joke that when you're at a live story and it works, everyone feels like the storyteller is talking just to them. When you have headphones in, that's literally true. It's just you with that person who is talking through your headphones.

I think we needed it. When I think back about my childhood, teens and in the '80s, we had gotten into the bigger and bigger and bigger blockbuster movies, where it was like movies would take thousands and thousands of people to tell a story. We'd really gotten into this thing where a lot of our stories were highly processed. I think this movement has come up because people love to just connect individually with one person, to hear one person's point of view. I think we desire that, and I certainly think the world would be better off if people could sometimes try to process it one story at a time when things get overwhelming. When I can't take the headlines anymore, I try to step back and just focus on one person and their story, because it's a way for you to take one step forward when you get overwhelmed. I think that as people, we're hardwired for story.