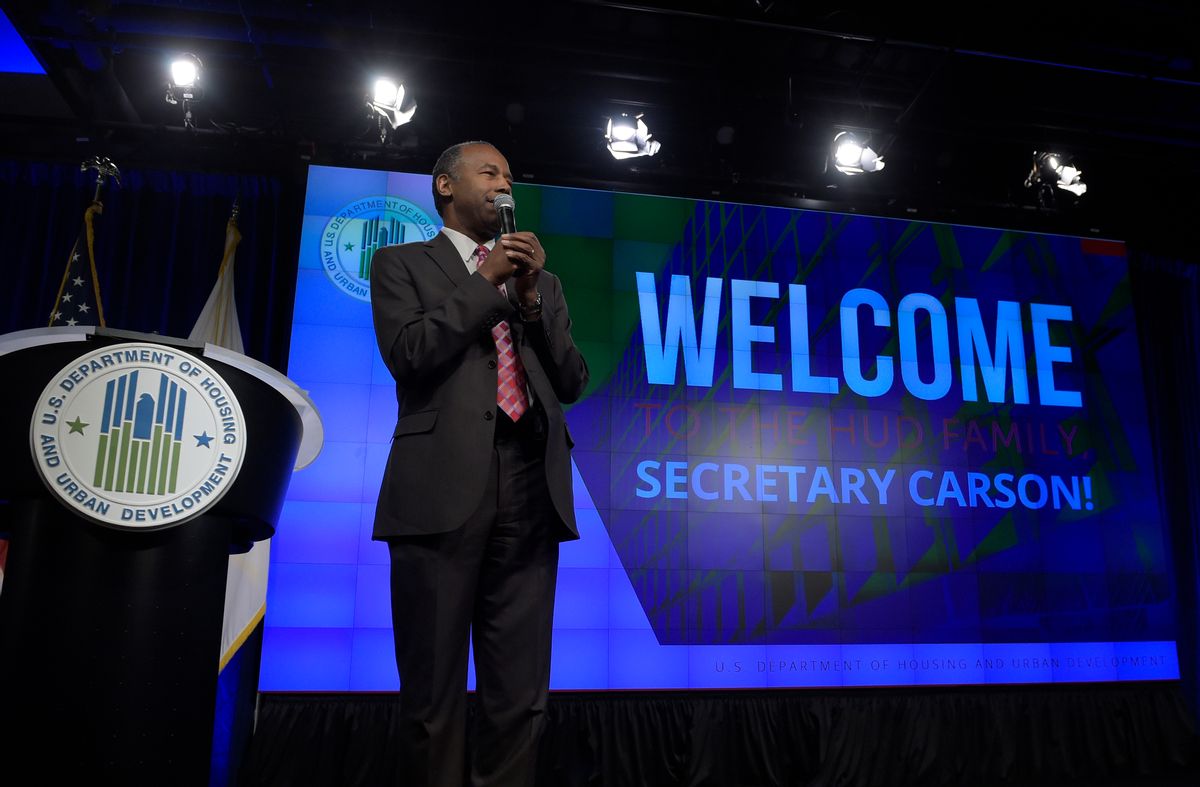 In this March 6, 2017, photo, Housing a Urban Development Secretary Ben Carson speaks to HUD employees in Washington. Carson said in the speech that "There were other immigrants who came here on the bottom of slave ships, worked even longer, even harder for less.” In history’s eyes, that statement was at least a faux pas, because slaves are not considered immigrants. (AP Photo/Susan Walsh) (AP/Susan Walsh)
--

As secretary of the Department of Housing and Urban Development, Ben Carson has been traveling throughout the U.S. for a number of weeks on a listening tour, meeting with low-income citizens relying on the government for assistance. Only, to some, the tour seemed more like a photo op than a chance to have a substantial conversation with a powerful government official.

“It was staged. It was so fast," said 87-year-old Alzene Munnerlyn, according to The New York Times. Carson paid a visit to her apartment complex in Columbus, Ohio, on the second day of his tour. After she was priced out of her apartment, Munneryln now lives in senior housing, paid for in part with a voucher.

“There needs to be a forum where you can just sit and talk with him, and he could ask you how you feel and then you could express yourself,” she said, frowning, according to the Times. Munnerlyn was upset and she felt as if she had been used, as Carson and many other local housing officials took pictures in her living room.

"She had wanted to tell Mr. Carson that President Trump’s plans to cut funding for housing vouchers might make it harder for other seniors to keep their homes," the Times reported.

Carson, a former neurosurgeon with no prior experience in running a federal agency, has acknowledged that government-funded housing is a necessity for some Americans, but he doesn't want them to get too comfortable. He told the Times that compassion means not making people dependent or providing them with “a comfortable setting that would make somebody want to say: ‘I’ll just stay here. They will take care of me.’”

Carson has a worldview that is typical of many conservatives — that people need to work for a living and those who work harder will achieve greater success. In January, the Times noted that Carson "embraced standard conservative views that too much government help — both in desegregating neighborhoods and in lifting people from poverty — can discourage people from working hard."

While touring various facilities in Ohio last week, Carson said in jest that one apartment complex that houses veterans lacked "only pool tables," according to the Times. As he continued his tour, he had nothing to say, except nod his head, to officials who described to him an overcrowded homeless shelter stacked with dozens of bunk beds where the people were purposely deprived of televisions.

“We have some people who are mentally ill. We have some elderly and disabled people," Carson told the Times. We can’t expect in many cases those people to do a great deal to take care of themselves,” he continued. “There is another group of people who are able-bodied individuals, and I think we do those people a great disservice when we simply maintain them.”