Yeah, there's still a Russia probe — and it looks worse for Trump all the time 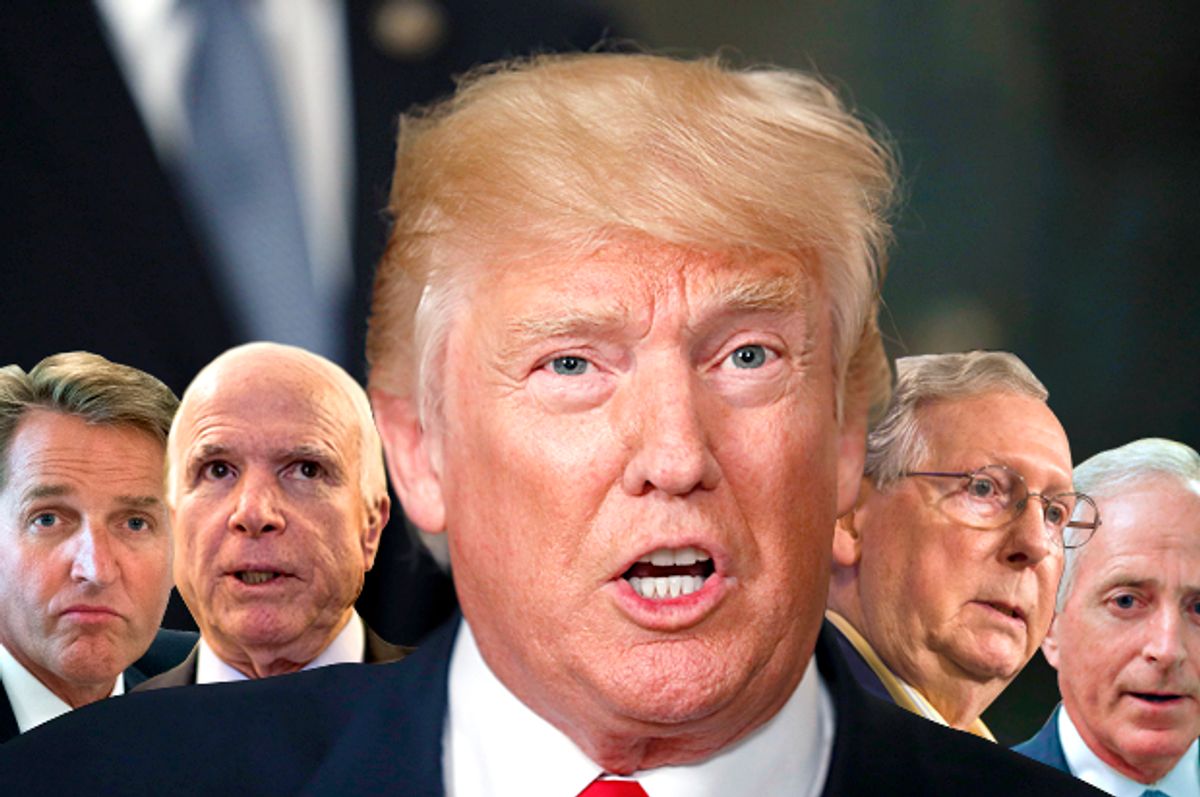 It's been another wild ride this week with President Trump holding one of his serious teleprompter speeches announcing that he has a secret plan to win in Afghanistan that he can't tell us anything about and then turning around to hold a raucous campaign rally in Phoenix reminding the world that he's really an undisciplined narcissist. More than one pundit observed that Trump is more clever than he seems with his crazed behavior, because as long as he's giving succor to Nazis and neo-Confederate racists, nobody's talking about the Russia investigation.

That's giving Trump way too much credit. He is an impulsive person who has shown no sign that he's that strategic about anything. And even if his frantic efforts this week were attempts at misdirection, it was to no avail. There have been quite a few developments in the Russia story, none of which are good news for the president.

The first big revelation was in the blockbuster New York Times story on Tuesday about Trump's deteriorating relationship with Senate Majority Leader Mitch McConnell. Trump has been tweeting his disappointment with McConnell for some time, so it was no big secret that he is unhappy with him over the health care vote. But apparently the two men had an angry confrontation over the phone on Aug. 9, in which Trump cursed at the majority leader over his inability or unwillingness to "protect" Trump from being investigated over Russia.

Trump doesn't seem to understand that Congress is an equal branch of government, endowed with oversight responsibilities. But if there was ever any chance that congressional Republicans could provide cover, it went out the window when Trump fired the FBI director and then reassured the Russian ambassador the next day in an unpublicized meeting in the Oval Office that he'd relieved the "pressure" by doing it. Everything in his behavior since then, including his incessant whining about Jeff Sessions' recusal from the probe as a personal betrayal, has made it more impossible.

Perhaps we might excuse Trump's argument with McConnell as a general temper tantrum; maybe he threw in the complaint about Russia as an afterthought. But Politico followed up the Times story with more reports of phone calls with Republican senators in which the president requested that they abandon their plans for Russia-related legislation. He reportedly tried to convince Sen. Bob Corker of Tennessee that the bipartisan bill sanctioning Russia was unconstitutional and damaging to his presidency. Corker didn't listen and the bill passed with overwhelming bipartisan support, which is not something you see every day.

Trump also called up Sen. Thom Tillis of North Carolina to complain about the latter's bill designed to protect special counsel Robert Mueller from a presidential firing. Unsurprisingly, Trump is not a fan of the legislation or of the legislative branch exercising its oversight responsibilities over his administration when it comes to Russia.

As one GOP aide told Politico, "It seems he is just always focused on Russia."

Meanwhile, there was some intriguing news about the investigation this week. ABC News reported that Christopher Steele, the former MI6 operative who compiled the notorious "dossier" about Trump's Russian ties, has spoken to Mueller and turned over all his sources. Perhaps that shouldn't be surprising, but Steele had reportedly gone underground for his own protection and was unreachable by investigators.

Another key figure behind that research report on Donald Trump's ties to Russia reportedly testified for 10 hours before Senate Judiciary Committee investigators. Glenn Simpson is a former reporter who is now a principal in Fusion GPS, the company hired to compile the information. He has supposedly turned over 40,000 documents to the committee. We don't know what was said, obviously, but on Wednesday the committee chair was quizzed by an astute constituent at a town-hall meeting and told him that if the committee voted to release the testimony and Simpson agreed, it might be made public. Simpson's attorney released a statement saying they have no objection to making the transcript of the testimony public.

CNN reported on an explosive new tie between the Trump campaign and the Russian government, right around the same time as the infamous Donald Trump Jr meeting meant to gather dirt on Hillary Clinton.

Congressional investigators have unearthed an email from a top Trump aide that referenced a previously unreported effort to arrange a meeting last year between Trump campaign officials and Russian President Vladimir Putin, according to sources with direct knowledge of the matter.

The aide, Rick Dearborn, who is now President Donald Trump's deputy chief of staff, sent a brief email to campaign officials last year relaying information about an individual who was seeking to connect top Trump officials with Putin, the sources said.

It is unclear where this request went, and CNN reports that Dearborn was "skeptical" of it. But Dearborn was formerly chief of staff to then-Sen. Jeff Sessions, and investigators are said to be interested in whether or not he had anything to do with arranging meetings between his boss and former Russian ambassador Sergey Kislyak -- the meetings Sessions failed to disclose during his Senate confirmation hearings.

This new email is in addition to reports from earlier this month that yet another Trump campaign official, George Papadopoulos, had tried to arrange meetings between Trump and Russian officials.

One might ask whether meeting with Russian emissaries and leaders is a normal function of presidential campaigns. It's not. Nobody in that business can think of another instance. In fact, Republican strategist Steve Schmidt -- who worked on George W. Bush and John McCain's presidential bids -- had this to say back on Aug. 4 to MSNBC's Nicolle Wallace, also a former GOP strategist who worked on the same campaigns:

This campaign had Russians all over the place!

All of this is circumstantial. But between Trump's increasingly manic insistence on discrediting the press, resisting any sanctions or pushback for Russian meddling and demanding the Congress cease exercising its oversight duties, it's hard to escape the suspicion that he's getting ever more nervous about something. He must be going against his lawyers' advice, since he is clearly feeding suspicions of obstruction of justice, which is one of the charges the special counsel is investigating.

Common sense says that normal people who have nothing to hide don't act this way. Of course, nobody ever said Donald Trump was normal.