While the media focuses on Trump, Netanyahu imposes a "solution": There will never be a Palestinian state 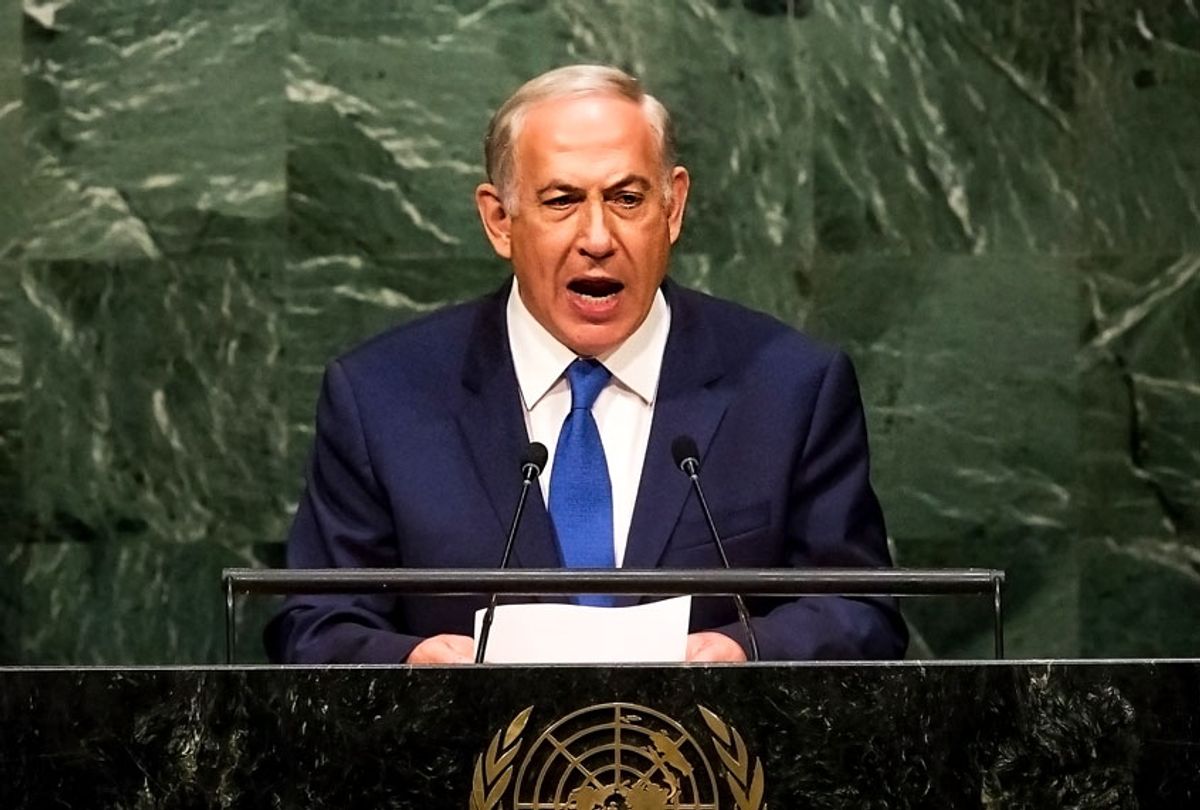 In between anti-government protests in Iran and President Donald Trump’s tweets about the size of his nuclear button, Huma Abedin and civil aviation safety, an important vote took place in Israel. Few people seemed to notice. The Washington Post relegated the story to its “Digest” of world news and Reuters produced a short article, but the Wall Street Journal did not even bother to cover it.

There may have been a mention along the crawl of the three cable news networks, but who gets their news from television? Only the New York Times ran an article commensurate with the fact that on New Year’s Eve, the Likud Party’s Central Committee voted to extend Israel’s legal jurisdiction to settlements in the West Bank. It is a legal nuance that seems insignificant against the backdrop of 50 years of occupation, but it has significant consequences. The move is a prelude to annexation.

At the same time that the Likud committee voted, Israel’s Justice Minister, Ayelet Shaked, and Attorney General Avitai Mandelblit instructed Israeli ministries to justify why, in their view, new legislation should not apply to settlements in the West Bank. This will make it easier to extend Israeli law to the Occupied Territories, making it easier to build in these areas. More importantly, the move essentially establishes Israeli sovereignty over the land. According to Shaked, “What we did is an attempt to decrease the gap between Judea and Samaria and Israel.” In other words, there is no difference between Tel Aviv and Elon Moreh.

According to the few analysts who offered commentary for sparse reporting on the vote, the Likud committee’s decision is not as big a deal as it seems: It is non-binding, the Likud has long rejected the two-state solution on principle, and Prime Minister Benjamin Netanyahu skipped the vote. It is true that there is nothing to compel Netanyahu to carry out his party’s decision, but that should not lull anyone into believing that what happened on New Year’s Eve was just political theater.

Netanyahu is an extremely shrewd politician. He stayed away from the meeting either because he was too weak to stop something he opposed or, more likely, as a way of signaling his assent without taking responsibility for the decision while he gauges international reaction. The idea that Netanyahu holds back the annexationist right has been politically useful for him, his supporters and American officials charged with managing a (nonexistent) peace process, but it does not have much to do with reality.  The Israeli prime minister is no two-stater.

Even if one takes Netanyahu’s absence as a meaningful indication that the Likud leadership was just blowing off ideological steam, there was a lineup of other Likud ministers in attendance who no doubt see themselves as potential successors to the prime minister should he be brought down in a brewing corruption scandal. At the very least, the Likud gathering underscored the annexationist worldview of senior Israeli politicians.

Minister for Public Security Gilad Erdan declared to the party leadership, “We will now promote the recognition of our sovereignty of the Jewish settlements in Judea and Samaria. We must begin to enact this sovereignty, we have the moral right and obligation towards our settler brothers.”

The combination of the Central Committee’s decision, the enthusiasm with which ministers participated and the instructions that Shaked (a member of the Jewish Home party, which is to the right of Likud) and Mandelblit sent to bureaucrats clearly indicates that the present government intends to begin formally incorporating into Israel those West Bank territories the Israelis conquered in the June 1967 war. Without much of an effective opposition in the Knesset, there is nothing to prevent Likud and its coalition partners from implementing the nationalist vision that was the basis for the Central Committee’s decision.

No one should be terribly surprised that Israel is embarking on annexation. It is entirely consistent with the “Greater Israel” worldview of right-of-center Israeli governments, which, with brief interludes in the early 1990s and early 2000s, have dominated the political arena since 1977. As a result, the idea that the West Bank is a natural component of Israel, like the Dan Region (essentially the central part of the country including greater Tel Aviv), has been part of right-wing political discourse for a long time.

Of course, elements of the center and center-left contest this idea, even though both have had a strong hand in the settlement enterprise. Whatever their culpability once was, opponents of annexation have now lost the argument. In the current permissive international environment where the president of the United States has recognized Jerusalem as the capital of Israel -- in a tweet declaring it “off the table” for Palestinians -- Europe is weak and crises from the Korean, Arabian and Crimean peninsulas dominate the attention of policymakers, Israel’s annexationists no longer feel the need to deny what should be obvious to anyone who cared to notice.

This is especially so when the current U.S. ambassador to Israel, David Friedman, is a financial supporter of settlements and objects to the term “occupied” when referring to the West Bank. Beyond the rhetoric of Israeli and American supporters of annexation is the physical reality of the Occupied Territories. The roads, cities and other infrastructure that the Israelis have built since they began settling the West Bank have closed off the possibility of two states and vastly increased the likelihood that an Israeli government would annex this territory.

This creeping annexation was not unknown to places besides Israel where it counted most, especially Washington. While outside the government there was a willful suspension of reality about what was actually happening in the West Bank, previous administrations — with varying degrees of enthusiasm — reasoned that a peace process, even one that did not result in peace, would make annexation impossible by holding Israeli settlement construction and Palestinian violence in check. One can understand the logic, but of course, the number of Israeli settlers doubled between the famous Yitzhak Rabin-Yasser Arafat handshake on the White House lawn in September 1993 and the turn of the millennium. During the same seven years (before the second intifada), Palestinian terrorists including Hamas, Islamic Jihad and Fatah competed to spill Israeli blood.

Middle East analysts, government officials and journalists have often said the problem with the peace process was not the solution — two states, living side by side in peace. The challenge was getting there. This should have been a clear indication that the idea of two states was a notion that existed only in the minds of people charged with shepherding, reporting and analyzing the peace process. The fact is — and has always been — that both sides reject the two-state solution.

Supporters of the Palestinians argue that Mahmoud Abbas, the president of the Palestinian Authority, which is little more than a dysfunctional ward of the EU and the United States, cannot make concessions in a peace process because Palestinians have nothing left to give and Israel holds all the power in any negotiation, especially with Washington’s unconditional backing. This is true, but it is equally true that Palestinians have never come to terms with a vision of justice that accommodates legitimate Israeli claims to the land. That is their right, but also their collective national tragedy.

Israel, for its part, is unwilling to meet any Palestinian demands for peace not because they are necessarily unreasonable — though some surely are — but because to do so would mean the disruption of its long-held aim to annex the West Bank. The combined weight of about 575,000 settlers (when we include East Jerusalem), Palestinian weakness, and international distraction and indifference means that subterfuge is no longer necessary.

The only aspect of this sad state of affairs that is truly shocking is the continued American embrace of the two-state solution. Even President Trump, who regards himself as some sort of maverick disruptor of long held shibboleths, has signaled his support for this outcome, although his way of going about it is unconventional. When one inquires in Washington why two states remain U.S. policy, the annoyed response is invariably, “Do you have a better solution?” No, but that does not mean American officials should remain committed to an idea that the parties to the conflict consistently discredit through their own actions and rhetoric.

About two decades ago, a bunch of Palestinian teenagers stood by bemused as a group of graying Israeli lefties demonstrated in front of the Damascus Gate in the Old City of Jerusalem, in favor of establishing two capitals — one Israeli, the other Palestinian — in the city. When asked if they thought that there would one day be two capitals, the teenagers laughed and said there would only be one capital in Jerusalem, Israel’s capital. They were hard-bitten and cynical too early for their tender years, but they were correct. There was never a chance that Israelis would agree to share Jerusalem as the capital for two states, because there was never going to be another state.