In America's racial drama, only white people are allowed to be "innocent." The Covington boys are a classic case 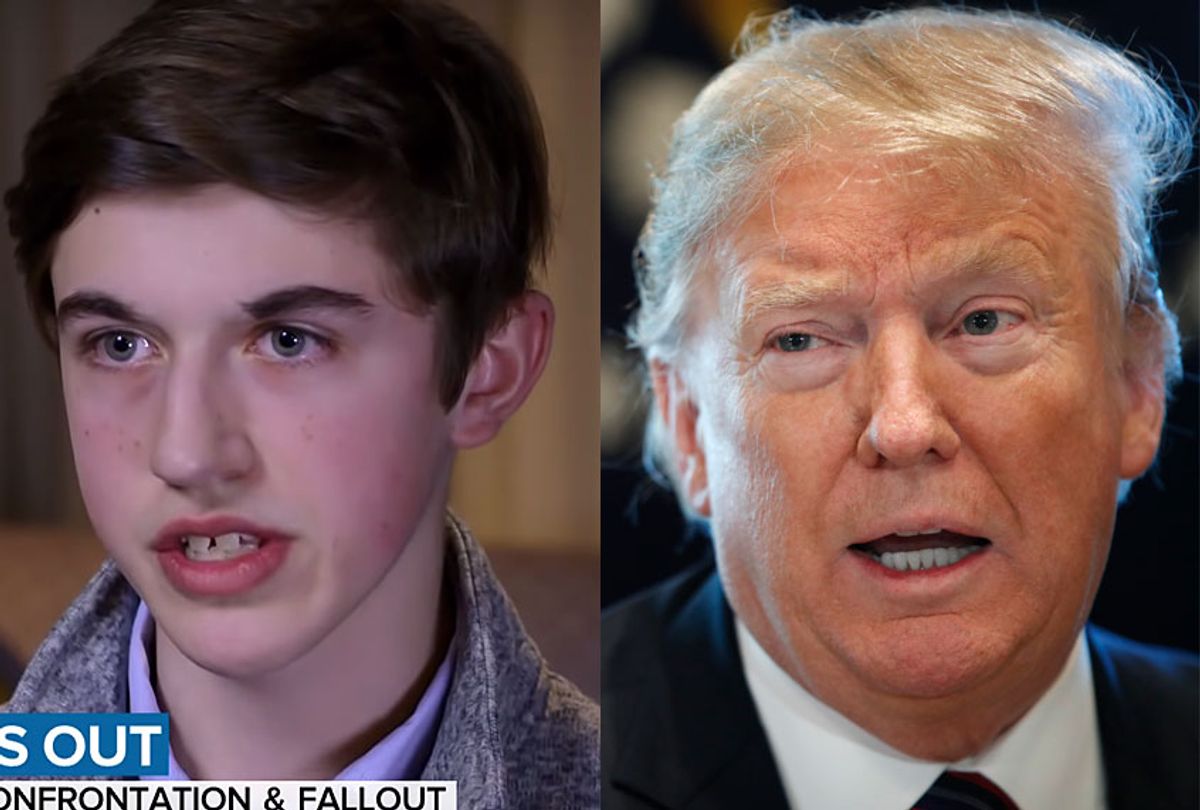 There are rules of race and the color line in post-civil rights American and the age of Donald Trump. Learn them. These rules were almost instantly deployed in defense of the dozens of white MAGA hat-wearing teenagers from Covington Catholic High School who, in a widely viewed video, harassed and mocked a Native American elder last Friday at the Lincoln Memorial in Washington.

These rules include the following.

The mere accusation of racism against a white person is worse than the impact of racism on the safety, security, lives and literal existence of nonwhites.

White people are the "real" "victims" of "racism" in America. Donald Trump, with the help of Vladimir Putin and Russia, rode this lie to the White House.

Whiteness is benign. White people, regardless of the evidence of their bad behavior or ill intent, are always entitled to the benefit of the doubt.

White racial innocence and white racial fragility must always be honored. As such, no amount of evidence is sufficient to prove conclusively that racism exists and that a given individual or group of white people have acted in the service of racial animus and racial inequality.

When white people are accused of racist behavior, they are allowed to decide what evidence is acceptable, credible and true.

Intentions, feelings, and the unanswerable question "What is in their heart?" trumps all empirical evidence and facts about the consequences of racist behavior and the context in which it occurred.

Stand your ground. In his interview with NBC's "Today" on Tuesday, Nick Sandmann -- the Covington teen seen face to face with Nathan Phillips in that widely-viewed video -- used that language: "As far as standing there, I had every right to do so." His words were in all likelihood very carefully chosen by the public relations firm hired by his parents -- a PR firm with right-wing connections.

"Personal responsibility" does not apply to white conservatives. Contra Martin Luther King Jr., the long arc of history does not necessarily bend towards justice. In the age of Trump it is stuck on white victimology. For example: the white teen MAGA mob is somehow held to be not responsible for their foul behavior toward Native American elder Nathan Phillips because a small group of "Black Israelites" (essentially racial chauvinist black Power Ranger cosplay clowns) said mean things to them.

This is the very definition of racism and white supremacy: the white teenage mob decided that black and Native American people are somehow interchangeable; anger at the Black Israelites can then be reasonably transferred to Nathan Phillips; racist taunts and harassment against Nathan Phillips are therefore justified.

In an essay published Tuesday in the National Review, David French signals to another very old and important rule of race that still operates in today's America: Empathy and sympathy are demarcated by White America (especially white conservatives) along and against the color line:

In the [Brett] Kavanaugh case, conservative men and women looked at decades-old, uncorroborated allegations, the unquestioning acceptance of those claims, and the furious effort to destroy a man’s reputation and career – even by passing along the wildest and most implausible claims – and thought, “That could be me' or 'that could be my husband.'

Now, these same people look at the reaction to the Covington Catholic kids and think, “That could be my son.”

That’s the message that sent a shudder up the spine of husbands and wives during the Kavanaugh hearings. That’s the message that sends a shudder up the spine of moms and dads as we watch men and women try to ruin the Covington Catholic kids. This isn’t just a media scandal. When we see the hate, some of us see our sons, and we know that in America today, their futures, their reputations, and – given the prevalence of death threats – perhaps even their very lives are in the hands of an angry mob.

The idea anybody could take joy in the destruction of young kids is absolutely outrageous to me. That’s exactly what we saw members of the media and other leaders do. These are kids ― let’s not forget ― these are 15- and 16-year-old kids who were put in a very tough position and actually handled it very well.

Sanders sought to link the Lincoln Memorial episode to BuzzFeed's publication of an uncorroborated story that Trump had told Michael Cohen to lie to Congress:

I think what happened with BuzzFeed is a great lesson for the media. Quit trying to be first and start trying to be right. We have seen time and time again where they run out here with outrageous, ridiculous stories. One person reports it to begin with and they all jump on it. We saw it again with the Covington students. I’ve never seen people so happy to destroy a kid’s life.

On Twitter and elsewhere, Donald Trump, his son Donald Jr. and other spokespeople have said that the Covington Catholic MAGA mob are somehow the "real victims." It is worth noting that Pat Cipollone, Trump's White House counsel, is an alumnus of Covington Catholic.

Unlike Nick Sandmann and his compatriots from Covington Catholic, the families and survivors of hate crimes inspired by Donald Trump and his movement have not been invited to the White House.

Those who defend and protect the white teens from Covington feel no compassion for the thousands of brown and black migrant and refugee children who have been put in concentration camps by the Trump administration and "disappeared" into a system that has no intention of reuniting them with their families.

Families and other members of communities where innocent black people have been brutalized and killed by America's police have not been invited to the White House by Donald Trump. Trump did not host Tamir Rice's family. Or Trayvon Martin's family. Or Rekia Boyd's family. Or Philando Castile's family.

By contrast, black and brown Americans are not allowed to make such public demonstrations of sympathy and empathy with one another.

When President Barack Obama made the basic observation that "You know, if I had a son, he'd look like Trayvon [Martin]," Republicans and other members of the white right nearly combusted in an apoplectic fit. For Obama to say such a thing was "racist" and "beneath the presidency." His real crime, of course, lay in daring to remind White America that he was actually a black person who happened to be president of the United States. To the white gaze, Obama's blackness was by definition in poor taste, something to be ignored or overlooked. Black humanity is a revolutionary act and a threat to many white folks. It is offensive.

Some have described the video of the Trump teen MAGA mob as being like "Rashomon" or a new Zapruder film -- everyone sees it differently. Alternatively, the video has been called a Rorschach test for America: a reflection of our inner thoughts, biases, preconceptions and ideas. But matters are really not that complicated.

A group of white teenage boys donned their MAGA hats -- which are overt and intentional symbols of bigotry, racism and ignorance -- attended a right-wing Christian rally aimed at denying women their reproductive rights, then happened upon a group of "Black Israelite" cartoon bigots, and in retaliation decided to harass and insult a Native American by yelling “war whoops” and making "tomahawk chop" gestures. They did so because white privilege had trained them from birth that they would likely be able to act in such a way without consequences.

Claims that the boys from Covington Catholic are innocent victims are undercut by evidence that this behavior is part of a larger pattern. Other video footage from that same day appears to show the Covington boys harassing teenage girls and one of their group making comments such as, "It's not rape if you enjoy it."

The New York Post has also shared an image of white boys from Covington Catholic apparently wearing blackface (their faces and bodies painted black with white around their eyes and mouths)  as they appeared to mock an African-American player at a 2012 basketball game.

What W.E.B. Du Bois described as the "psychological wages of whiteness" can take many forms. One of them is the ability of those deemed to be "white" to bend reality and distort plain and obvious facts in the service of white supremacy. Defending the behavior of the white teens of Covington Catholic is a prime example of an old and dangerous American problem.