"Cats" is a mesmerizing laser pointer for your brain

Before answering if a movie musical of “Cats” is any good, I ask another question: Is “Cats” supposed to be good? 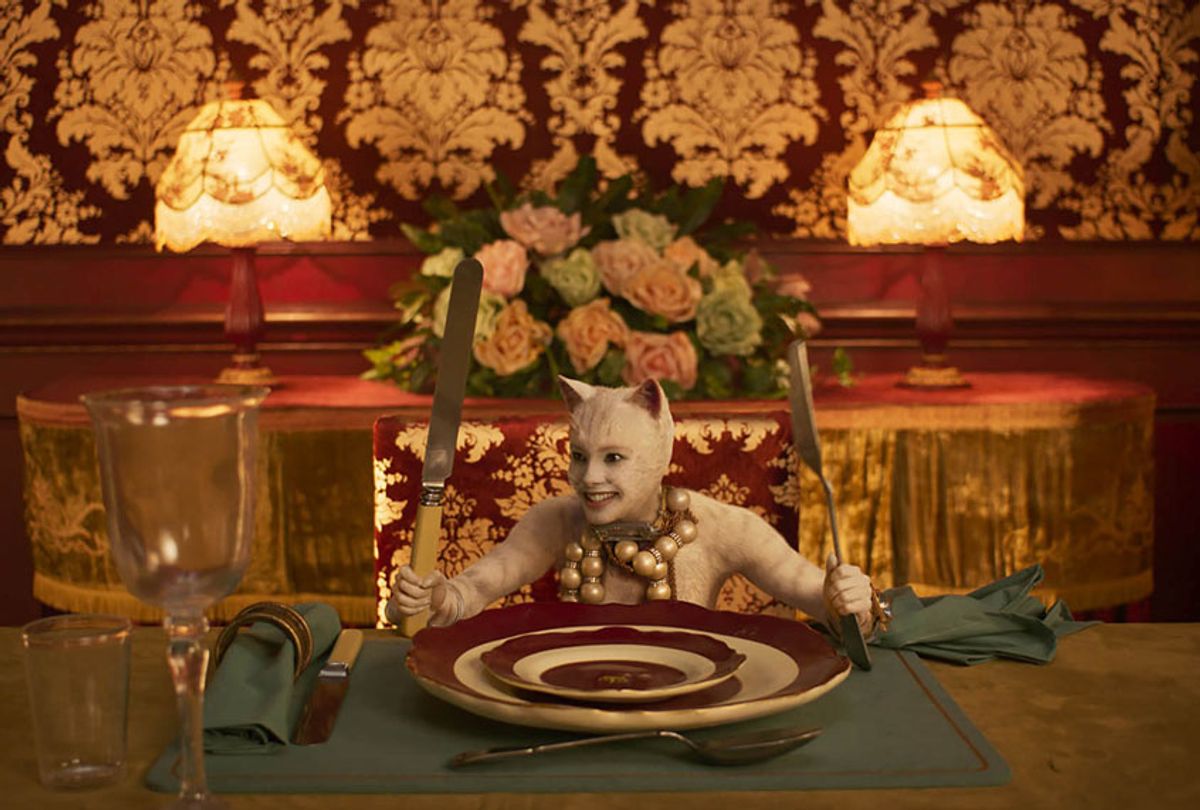 Was there ever a moment when “Cats,” Andrew Lloyd Webber’s theatrical smash musical, was not considered high camp? Was it ever not an offhand shorthand for tourists and karaoke? I ask because the only answer I can come up with to the question of whether the movie musical of “Cats” is any good is another question. Is “Cats” supposed to be good?

From the moment the first trailer for director Tom Hooper’s cinematic adaptation of the record-breaking musical dropped last summer, critics and fans alike have been living in an unprecedented state of awed horror. The film stars an array of music and acting heavyweights, including Taylor Swift, Jennifer Hudson, Judi Dench, Ian McKellen, Jason Derulo, and Idris Elba. It boasts lavish sets and extravagant musical numbers and has introduced the phrase “digital fur technology” into the vernacular. And if you were one of those people who saw the trailer and thought, “Well, that looks totally insane,” I’m here to tell you the other 118 minutes are just as bonkers — which is why I assume you’re going to see it. You don’t go to “Cats” for a stirring adaptation of a Victor Hugo novel that is literally about miserable people. You don’t go for East Village squatters with AIDS. You go for a story about cats. A story based on a book of poetry about cats. Damn straight it’s going to get weird.

As a musical theater nerd and person who grew up within mewling distance of New York City, I've had “Cats” as part of the fabric of my life for so long, it’s difficult to remember that there was a time when the show was completely new. Revelatory, even. When “Cats” debuted in London in 1981, composer Andrew Lloyd Webber was already a blockbuster machine, thanks to hits (with lyricist Tim Rice) like “Evita” and “Jesus Christ Superstar.” A fan of T. S. Eliot, Lloyd Webber began tinkering with “Old Possum’s Book of Practical Cats” as a simple songwriting exercise before deciding to build a show around it. What emerged was a worldwide phenomenon, a tale of a single night in the (nine) lives of a tribe of scrappy London “Jellicle” cats, competing to be the one chosen to ascend to the “Heaviside” and be reborn.

You can’t say Lloyd Webber doesn’t have a genius instinct for what audiences want — Grizabella, the “glamour cat” who belts out the iconic “Memory,” doesn’t even appear in Eliot’s original collection. “It was a poem he wrote he thought was too sad for children,” Lloyd Webber explains in a 2015 video. But when Eliot’s widow Valerie gave him her husband’s unpublished poem “Rhapsody on a Windy Night,” Lloyd Webber knew he’d found his showstopper. When "Cats" opened in the West End, the show was an instant critical and audience darling, and “Memory” was its standout 11 o'clock number.

Writing in The Guardian at the time, Michael Billington called “Cats" "an exhilarating piece of total theater" and "a triumph." The show ran for the next 21 years. “Cats” then enjoyed similar success on Broadway, where The New York Times called it “a musical that transports the audience into a complete fantasy world that could only exist in the theater and yet, these days, only rarely does.” The production remained embedded on the Great White Way for 18 years, earning itself the menacing catchphrase, “Now and forever.” Over nearly four decades, the show has raked in billions of dollars, been celebrated in a US postage stamp and reinvented the modern image of musical theater — and musical theater audiences. “Cats” is family friendly. It is simple in its premise and lavish in its execution. It is, like Thanos, inevitable.

“Cats” is also such a familiar cultural touchstone, such a deeply strange thing, that it has been the subject of nonstop friendly mockery and outright contempt from its inception. An audience watching this new cinematic version of “Cats” cannot help bringing that history into the experience. You can’t watch this “Cats” and not think of the musical’s appearances in “Unbreakable Kimmy Schmidt” or “Crazy Ex Girlfriend.” You can’t not hear Paul Newman asking David Letterman, “Where the hell are the singing cats?” or forget its devastating appraisal from “Six Degrees of Separation” — “Aeschylus did not invent the theatre to have it end up a bunch of chorus kids in cat suits prancing around wondering which of them will go to kitty-cat heaven.” And I challenge you to hear the Jellicles song in this movie and not feel like you’re on hold for “Bojack Horseman’s” Princess Caroline.

Recent human-CGI hybrid musicals like “The Lion King” and “Aladdin” did insanely well at the box office, but left many viewers chilled by their flat, formulaic energy. But here, director Tom Hooper, who has helmed the highfalutin Oscar winners “The King’s Speech,” “The Danish Girl” and “Les Miserables,” fully leans into the profound English eccentricity of the source material — and then expands on it. These are just a few of the things you will experience, should you choose to invest your time in this movie:

And all of this while everyone is dressed like CATS!

Curious? I thought so.

This is a film that has already inspired headlines like “Judi Dench Says She’s Playing ‘Trans Deuteronomy’ in ‘Cats’” and “Jason Derulo Says He's '125%' Certain His Genitalia Was Airbrushed Out of Cats.’” I mean, I love “Parasite” and “Marriage Story,” but you’re not going to get those kinds of stories out of those movies.

A moviegoer whose tastes run toward sad Sondheim and dialogue like “I saw ‘Hamilton’ at The Public” may find plenty to eyeroll at from the relentless surrealism of “Cats.” But there’s something uniquely fun about seeing the likes of Ian McKellen and Jennifer Hudson fully committing to their down-on-their-paws characters, a spirited sense of shared strangeness. I was often confused and frankly frightened watching “Cats,” but I was never bored. And it’s not often one leaves a movie questioning the very fabric of reality, but I fully staggered out of “Cats” like I’d just spent two hours chasing one big, expensive laser pointer. And me, I was just a baffled little feline, following its light wherever it led.