Representation heals: How watching K-dramas lifted the weight of white supremacy and freed my tongue 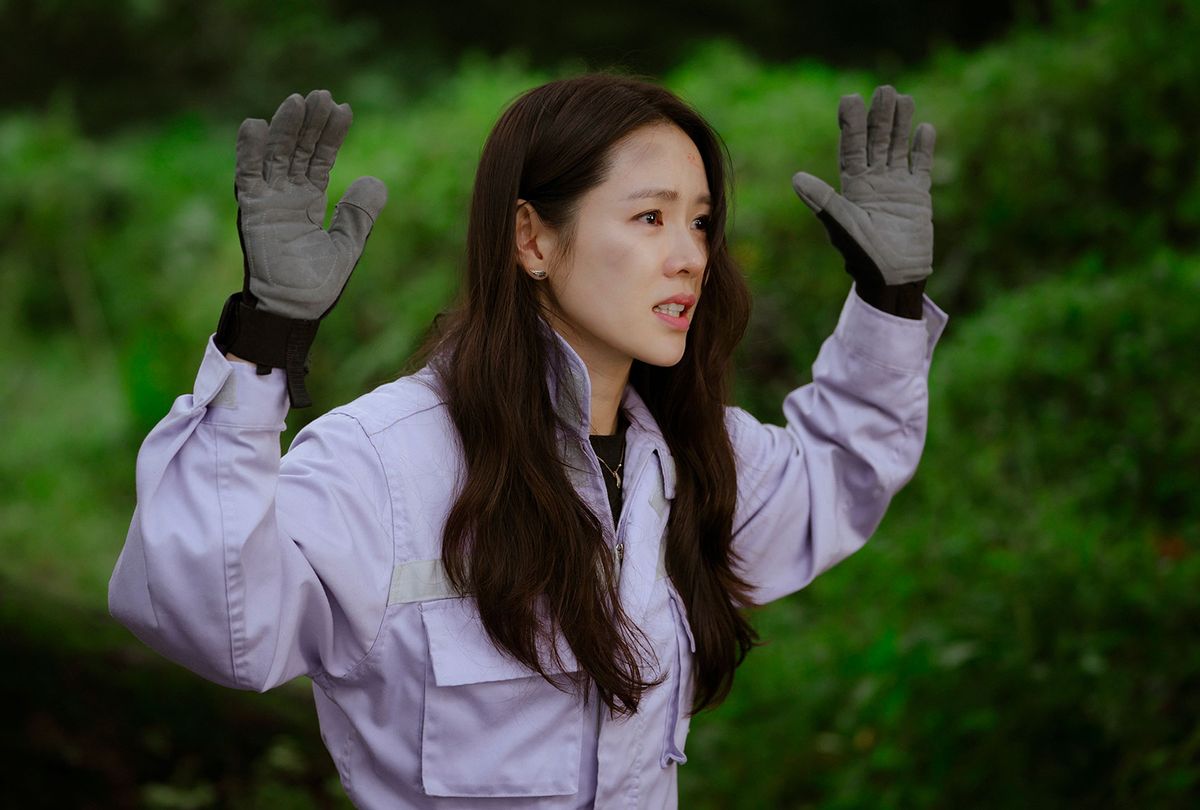 Like everyone else on this planet, the pandemic changed me. My world shrunk to the inside of my house as I baked inordinate amounts of sourdough and obsessively washed my hands. And, in a twist I couldn't have seen coming, I began speaking Korean properly for the first time in my life.

Learning a new language during the pandemic is not uncommon, but for me, learning my parents' language was something I had largely ignored and rationalized as something I didn't need. I was born in Australia and moved to America. English was the only language I needed to work and live.

My parents migrated to Sydney in the late '70s, had me and my brother in the '80s, and raised us in a one-sided multilingual household. My parents are both fluent in English and Korean, and whilst my brother and I understood Korean, we both always spoke English. Language was key to how deftly my parents assimilated into Australian society. Their fluency informed how easily we moved between our home life and our lives out in the world.

My father graduated from university, thanks to then Prime Minister Gough Whitlam's free tertiary education (seriously America, make college free), and both my parents would go on to work for Australian companies, personifying the immigrant success story. We lived in a predominantly white suburb. We didn't go to Korean church. Apart from a handful of Korean families with whom we socialized, my life was dominated by Australian culture – white Australian culture. Racism, I felt, was something that didn't touch my life.

Sure, a boy in kindergarten had pulled the inevitable slant-eyes gesture with his grubby fingers while singing the Ching Chong China Man rhyme to me, but my six-year-old self haughtily dismissed his vitriol as pitiful ignorance because I wasn't Chinese, I was Korean and that was completely different. Years later when a therapist told me my tendency was to intellectualize my emotions, this specific incident popped up. Adult me recognized I was actually scared at being singled out and had immediately self-soothed by rationalizing that I had somehow escaped being his intended target.

When I was in 4th or 5th grade, I remember being shoved in a staircase at school by my friend's mum, Mrs Schmidt. This adult white woman stuck her finger into my chest and told me to stay away from her daughter. She didn't want her kid to play with an Asian. We were alone in that stairwell and I was shaking. I nodded obediently, stopped talking to my friend, and finished out primary school like nothing ever happened. Racism is a loud gunshot, but it can also be a secret shame.

It also wasn't my daily experience. We used to sing the 1987 hit song "I Am Australian" during school assembly and the utopian lyrics comforted me enormously about my identity as an Australian kid. I sang it with gusto every week: "We are one, but we are many/And from all the lands on earth we come/We'll share a dream and sing with one voice/ I am, you are, we are Australian." Man, did it speak to me.

It was only once I became an actor that my identity really became problematic for casting. I was employed in Australia more than once to play the victim who spoke broken English and barely contributed to a scene beyond nodding or crying. English is my first language, but my Korean face did not match my Australian voice in the stories written and the parts I could play. I felt muzzled.

In America, Asian actors are often strangled by ethnic restrictions placed on us. So many casting notices indicate that one must match the role, ethnically speaking, in order to audition. As an attempt at correcting such wrongs of the past as Blackface and yellowface casting, I'm sure it's a well-meaning gesture. But I can't help but notice my white American friends who get to play Russian, German, Irish, American, British etc. roles with impunity. The same decision makers also had no problem with casting me in roles like Shin the Gangster with the ubiquitous-for-Asian women "edgy" colored hair extensions. In drama school I was Lady Macbeth but in the industry I was Lotus the Massage Therapist.

Mostly though, I felt lucky to have work in an industry where work is unbelievably difficult to get. I didn't have the time or power to question the work I was booking or the poor writing that relegated me to formulaic roles. After all, who would have the imagination to write a nuanced Korean Australian character for which I could read? I participated mindlessly in the cycle of stereotypical supporting roles that I saw available to me as an Asian actress. Internalized racism leads you to believe the structure cannot change. It knows how to corral you and keep you in place.

Representation matters. You hear it all the time from all the underrepresented groups pushing our culture toward inclusivity. I didn't realize how starved I was for representation until I started watching Korean dramas in the summer of 2020. To watch show after show filled with faces like mine, telling stories where their Asianness was not a key character attribute or plot point transformed me. I had always been a minority in the story, and in the K-drama world anti-Asian racism doesn't exist by virtue of my ethnicity being the majority. Therefore storytelling is unburdened and simply, free.

I started watching Korean series, aka K-dramas, because my friend Tom's father declared one to be his favorite show. I was intrigued. A 70-something-year-old white man was out there bingeing a Korean series? I just had to watch. The next few days were a blur as I consumed 16 90-minute episodes of "Crash Landing On You" – in which Yoon Seri (Son Ye-jin), a South Korean CEO, accidentally paraglides over the 38th parallel into North Korea and must learn to survive in a totalitarian state whilst inconveniently falling in love with a captain of the Korean People's Army.

This popular series on Netflix was my introduction to the severely addictive and wildly imaginative world of Korean television. It is a massive industry with a worldwide audience that has tripled in size since the early 2000s with Netflix recently announcing a half billion dollar investment in creating new Korean series and films. K-pop, K-beauty, K-drama, Oscar-winning Korean films, the Hallyu (South Korean pop culture) wave is never-ending.

After "Crash Landing on You," it was "Memories of the Alhambra," "Goblin," "The King: Eternal Monarch," "Cheese in the Trap," "It's Okay Not To Be Okay," "Itaewon Class," "Something in the Rain," "When the Camellia Blooms," "My Mister," "Misaeng," "Live," "Stranger" – the list goes on. Each show curiously just one season of 16 episodes but chock-full of extraordinary storytelling and performances. No reboots or remakes, all original content and an admirable ability to resolve story arcs in a single season, K-dramas are a fascinating alternative to your average eight-season procedural.

I slowly lured friends into K-drama world, and to my surprise, each became as obsessed as I was. We subscribed to Rakuten Viki and scoured everything Netflix had to offer. We Facetimed with friends on the east coast about our favorite series and received texts about newly discovered shows we had to watch. My husband even fan-tweeted with Paulo Coelho over the critically acclaimed "My Mister." It became a source of joy and conversation in a time of uncertainty and darkness. I was obsessed and completely shut out the noise of the final months of Trump bleating nonsense on the news or any English-speaking show really. I solely watched Korean shows, missing my parents back home in Australia and the sound of them speaking in Korean.

In August, I found a tutor online and began taking Korean classes. After my first lesson I was in despair at the state of my Korean skills. Like any beginner, I wondered if I would ever improve. Seven months later we chat in Korean, and I'm able to switch in and out quite comfortably. There's a way to go with vocabulary and spelling, but I'm elated by my progress. It was all always there, and I can't believe how much had lived in me unspoken.

I've started speaking to my parents in Korean, and it is a new, almost awkward, experience. We know each other best in English. I wonder how it feels for them to hear me finally speak their language. I feel sorry that it took me this long. "Han," loosely translated as the Korean concept of sorrow or regret, is ever present. I remember my Mum telling me how strange it was for her, as a young mother, to hear her children call her Mum and not Omma. Now I facetime with her in Korean and we dream of going to Seoul together when the pandemic is over.

It's a wild time to be a Korean Australian American. Last week kicked off joyous celebrations for Youn Yuh Jung, Steven Yeun and Lee Isaac Chung's historic Oscar nominations for "Minari," but just two days later, the Korean American community is in mourning following targeted mass shootings in Atlanta. The Asian American community has been rattled since Trump's scapegoating "China virus" and "kung flu" slurs began. Spiteful but effective, Asian hate crimes have risen by 150% across America. It is a unique pain when the victims look like you, your parents, or your grandparents. The crucial need for BIPOC communities to ally, resist, advocate and protect has never been more apparent. Those who were silent or *Oprah hand gesture* silenced – are standing up with an urgency that may seem like we passed yield point merely last week, but we know has been fermenting for generations.

I have never felt more connected to our Asian community and proud of my Korean identity. We are nearing the end of the pandemic, and I find myself emerging whole with a ripe tongue and a new voice.