Why is walking so good for the brain? Blame it on the "spontaneous fluctuations" 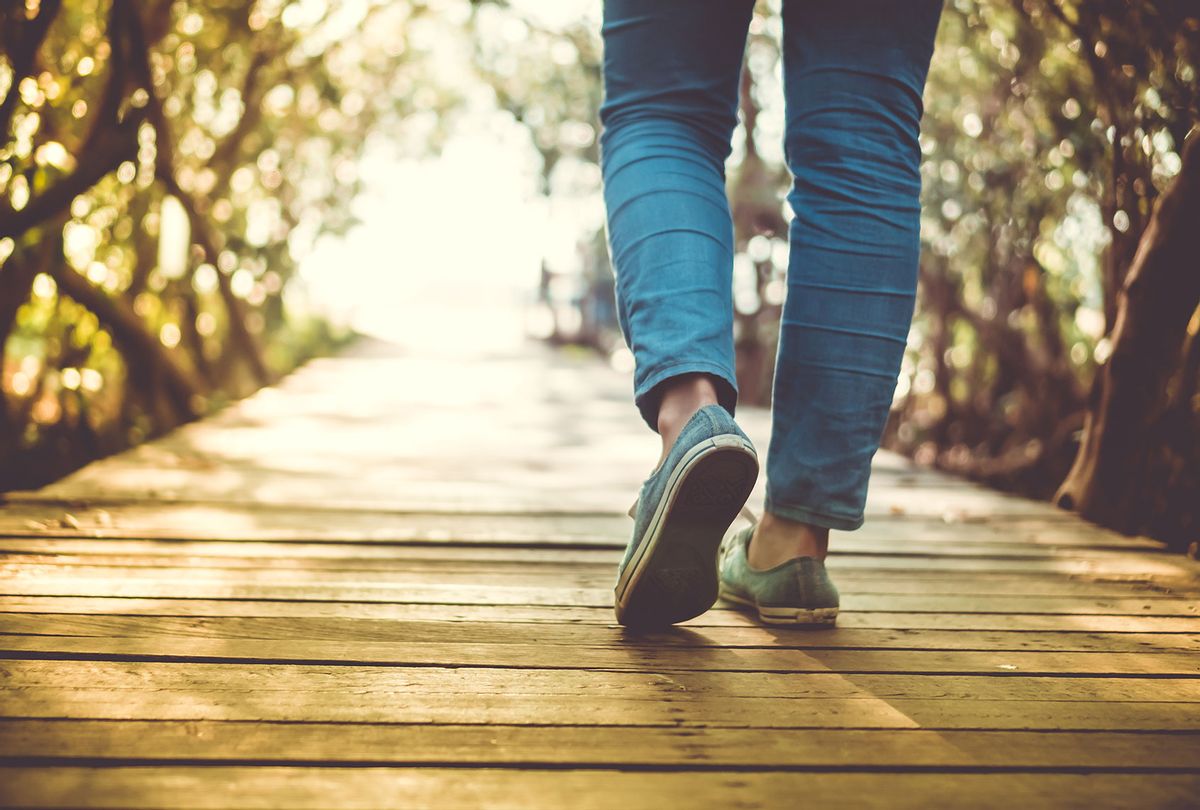 Like most people, I have been walking more than usual during the pandemic and enjoying it. My meetings with students and colleagues have turned into walking meetings around campus for over a year. Now, I have a problem: School is starting soon, and I don't want to go back to the classroom. We all saw this coming. Give employees a taste of the outdoors, and they might not want to go back to their offices and desks. So I am thinking of teaching my fall courses outside.

Yet while I was researching this possibility, I discovered a problem. I had always read that walking increased cognitive functioning and problem solving, but it turns out that it's not that simple. In 2014, a new study showed that walking decreased rational and linear thinking and increased divergent thinking and imaginative mind-wandering. Uh oh. Will my students learn less if I teach them while walking?

I teach philosophy, a discipline that prides itself on rational and analytic thinking. So is walking going to clash with the values of my profession?

But wait, aren't philosophers famous for walking and being rational? Socrates loved to stroll and philosophize, and Aristotle taught his classes while he walked up and down the walkways of the Lyceum. The Stoics walked and talked on outdoor porches with art on display. Seneca, a Roman Stoic, told other Stoics, "We should take wandering outdoor walks so that the mind might be nourished and refreshed by the open air and deep breathing." Plato's school was even outside, in a grove of trees called Akadēmía. So either the Greeks weren't as obsessed with rationality as we like to think — or maybe we are missing something.

What is the connection between walking and thinking, and is it still good for us if it makes us more irrational? We may have heard by now how walking makes us feel good by releasing endorphins, lowers risk our of depression; increases cognitive functioning; strengthens memory; enhances creativity; and produces a protein essential for neuronal development and survival, synaptic plasticity, and cognitive function. It sounds great, but how are all these related, and why do we have to sacrifice our hard-earned rationality to get them? This is what I wanted to know before sending my students to the realms of unreason.

A lot is happening to our bodies and brains on a walk, but one fascinating thing stands out. They are all related to an increase in what neuroscientists call "spontaneous cognitive fluctuations." Scientists have been telling us that the background noises our brains make are random and unimportant for almost a century; hence, they have filtered and averaged them out of their studies. Yet increasing evidence shows that this "noise" is neither random nor unimportant.

The brain is always active. Even when we lay motionless in bed thinking of nothing, billions of neurons in our brain are firing. Yet, in almost a hundred years of research, scientists still can't find the cause or consequences of this activity. Spontaneous fluctuations are like the dark matter or "junk" DNA of the brain. They make up the vast majority of brain activity but are shrouded in mystery.

Yet, what little we have recently discovered about them is already profoundly shifting our models of consciousness. Moreover, we now know that this flux is not just present when we are inactive but is involved in all brain functioning. It even eats up two-thirds of the brain's total energy supply. That's a big deal. We also know for sure it's not coming from bodily activities like breathing or heart movements, or from the electrical instruments used to measure it.

The most interesting positive finding we have so far is that these spontaneous fluctuations are neither random nor deterministic, but have an unpredictable "fractal" structure. A fractal is a pattern that roughly repeats across scales — like a tree whose few big branches have many smaller branches with even more leaves that look like tiny branches. Scientists have found that spontaneous neural activity follows a similar branching pattern throughout the brain, and has a related proportion of a few slow and strong frequencies to more faster and higher frequencies scientists call "pink noise." With this discovery, researchers are now starting to observe changes in these fluctuations related to aging, consciousness, mental health, experiences of art and nature, and memory.

One of the most compelling explanations for why healthy cognitive fluctuations have this fractal structure is that they were an evolutionary adaptation to aid humans in identifying, navigating, and remembering the fractal patterns ubiquitous in nature. For example, early humans spent a lot of their time walking around looking for things bathed in a world of fractal sights and sounds. This is why our eye moments and searching patterns employ fractal patterns of a few long and many short motions. Even the way we walk is fractal and becomes less so as we age. Fractal patterns are easy on the eyes, endlessly fascinating to see and hear and even inspire feelings of beauty.

When we take a walk outside, the fractal rhythms of our heart synchronize with the fractal rhythms of our lungs and our fractal gait. Researchers have also shown that our wandering bodies make our minds wander too. On a walk, our brain waves slow down. The underlying spontaneous fluctuations bubble up more easily, creating experiences of spontaneous thoughts and associations that seem to come from nowhere. We often call them "moments of inspiration."

Seeing and hearing natural fractals helps slow our brainwaves down, and slowing down our brain waves allows our spontaneous fluctuations to help identify and memorize patterns and rhythms more easily or work through problems unconsciously as dreaming does.

The exciting conclusion of this research is that while it's wonderful that walking increases blood circulation, the primary source of walking's cognitive benefits seems to come from its effects on the mysterious spontaneous fluctuations of our brains. This has certainly changed the way I think about the nature of intelligence, consciousness, memory, and education. Reason is not the source of intelligence; it's the product of it.

So while my students are out on their walks, they might be mind-wandering more than in the classroom, but this is a good thing. Perhaps this is what those Greek philosophers understood and what we have forgotten.

Recent studies on walking also show that walking with other people synchronizes their brain and bodily rhythms resulting in increased empathy, cooperation, and sharing. So walking may also be beneficial for everyone's social and emotional education.

Knowing all of this, part of me still wants my students to sit down in a classroom and listen to every word I say, even if the studies show they are less likely to remember it than if we were walking through the trees like Plato's students did. But I am going to take them outside anyway against my rationalist bias and see what our spontaneous fluctuations are capable of this quarter.