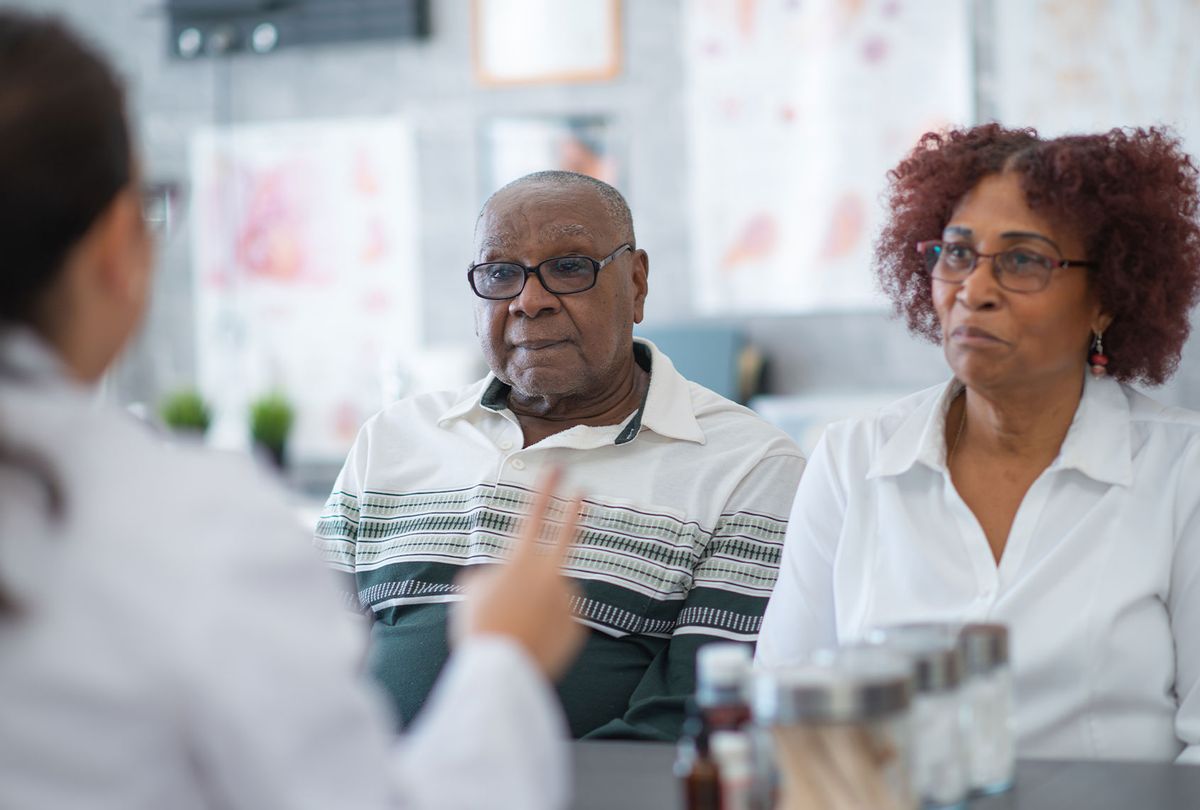 A couple sit next to each other in a doctor's office and listen carefully to their doctor. (Getty Images/FatCamera)
--

When couples get together and stay together, their bodies synchronize on a deep biological level, according to a new large-scale study conducted by Japanese researchers. This bodes well for couples in happy, physically active relationships, and can lead to bolstered health deep into old age. For others, it can produce uncanny and exacerbated health problems.

The study analyzed health data from tens of thousands of couples — 5,391 from Japan and 28,262 from the Netherlands. Across both populations, the researchers found that, in general, long-term partners experienced similar levels of blood pressure, triglyceride, and cholesterol, and were also more likely to simultaneously suffer from chronic ailments such as diabetes and hypertension.

The study's conclusions echoed those of a related study conducted in 2016, when researchers at the University of Michigan at Ann Arbor discovered a similar phenomenon on a smaller scale. By looking at health data from 1,568 older couples in the United States, those researchers found that partners who had been together for more than 50 years had roughly equivalent kidney function and grip strength. That research piggybacked on another set of findings from the University of British Columbia, which found that couples in long-term relationships often experienced concurrent symptoms of psychological illnesses such as depression.

In all of these studies, this linked-health phenomenon was frequently found in couples who were genetically dissimilar. This largely ruled out a possible biological explanation tied to "assertive mating" — a scientific term that describes the tendency for organisms with similar underlying physical characteristics to couple up. Instead, researchers believe that lifestyle factors — the daily routines and rhythms of a relationship — wind up playing a long-term role in the health of a couple.

While this deep synchronicity may be harmful in certain cases, in others it can prove beneficial.

The researchers behind the Japanese study also suggested that their findings could have implications for the way doctors diagnose illnesses and evaluate the health of their elderly patients. By looking at the health of a spouse, physicians might be able to glean important clues regarding the health of their patients — and in doing so, suggest preventative actions to assuage future health problems.

Another study, conducted by researchers at Michigan State University, found even more tangible benefits to corollary health between couples. Their 2014 paper described a four-year project, in which 2,754 older couples in the United States were asked to self-report health information while also evaluating their general level of optimism. The researchers discovered that relatively fewer cases of both arthritis and diabetes were present when at least one partner had a naturally optimistic disposition. In other words, positivity was not only good for an individual's health — a somewhat mystifying but widely established fact — but it benefited their spouse, too.