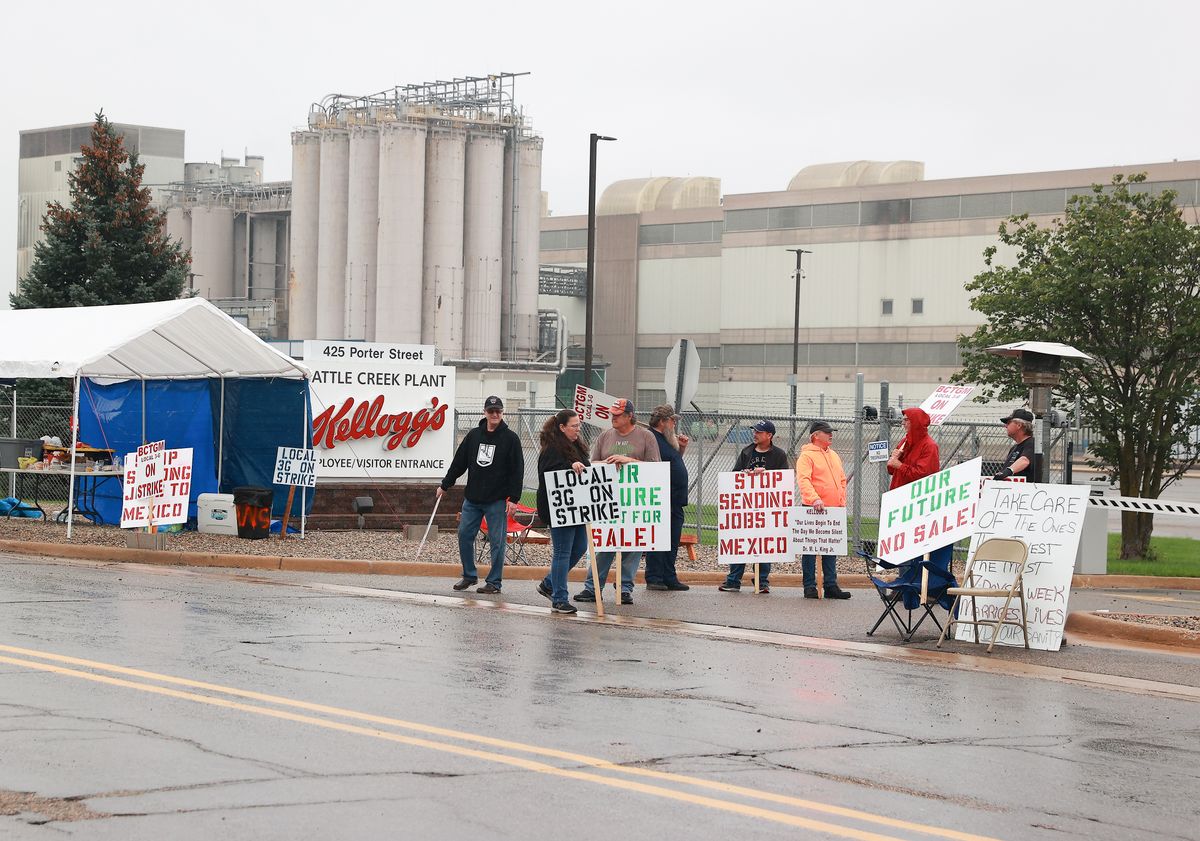 Former Labor Secretary Robert Reich observed Wednesday that with employees in industries across the spectrum set to strike in the coming days following corporate leaders' failure to meet their demands for fair pay and working conditions, the U.S. is closer than it has been in decades to experiencing a general strike.

"You might say workers have declared a national general strike until they get better pay and improved working conditions," wrote Reich in The Guardian. "No one calls it a general strike. But in its own disorganized way it's related to the organized strikes breaking out across the land — Hollywood TV and film crews, John Deere workers, Alabama coal miners, Nabisco workers, Kellogg workers, nurses in California, healthcare workers in Buffalo."

Labor advocates are calling the nationwide show of union power and worker solidarity "Striketober," as work stoppages across numerous industries are expected in the coming hours and days if unions' demands aren't met.

About 10,000 workers at farm equipment manufacturer John Deere are set to walk out Thursday if the company fails to negotiate a contract that satisfies the demands of the United Auto Workers (UAW) members by 11:59pm on Wednesday.

With 90% of members voting on Sunday, 90% voted down a tentative agreement over pension plan changes and what they viewed as inadequate pay raises — boosting compensation by 5 to 6% — considering the company's skyrocketing profits this year, with a net income between $5.7 and 5.9 billion.

"We aren't asking to be millionaires, we are asking for fair wages, a pension, and post-retirement healthcare," one employee told WQAD, an ABC affiliate in Moline, Illinois. "After 30 years or more of giving your body to a company moving 1,000 pound castings around or assembling tractors, it rips your body apart. It's not unreasonable to not want to have that worry in life of 'what if?'"

More than 24,000 nurses and other healthcare workers in California and Oregon also voted on Monday to authorize a strike after contract negotiations with their employer, Kaiser Permanente, stalled. The workers are demanding relief from pandemic-related burnout, 4% annual raises, and increased hiring.

After voting to authorize a strike earlier this month, 60,000 film and TV crew workers could go on strike on Monday if the Alliance of Motion Picture and Television Producers (AMPTP), which represents hundreds of production companies, fails to offer a contract that allows employees sufficient time off.

Workers frequently work 12-hour days — often without meal breaks — and get only 10 hours off in between workdays, while the lowest-paid crew members earn less than a living wage, according to the International Alliance of Theatrical Stage Employees (IATSE).

"Striketober is a function of greedy bosses trying to recoup the un-recoupable," tweeted Jonas Loeb, communications director for IATSE.

The recent strike authorizations and impending possible work stoppages come as thousands of people are already striking for fair working conditions and pay, including 1,400 Kellogg plant workers in several states; 1,100 miners at Warrior Met Coal, who have been fighting for a fair contract since April; and 2,000 hospital workers in New York.

Reich wrote that with frontline workers across the country putting their health at risk over the last 18 months by going to work at companies that have raked in historic profits, "workers are reluctant to return to or remain in their old jobs mostly because they're burned out":

Years ago, when I was secretary of labor, I kept meeting working people all over the country who had full-time work but complained that their jobs paid too little and had few benefits, or were unsafe, or required lengthy or unpredictable hours. Many said their employers treated them badly, harassed them, and did not respect them.

Since then, these complaints have only grown louder, according to polls. For many, the pandemic was the last straw. Workers are fed up, wiped out, done-in, and run down. In the wake of so much hardship, illness and death during the past year, they're not going to take it anymore.

"Corporate America wants to frame this as a 'labor shortage,'" wrote Reich. "Wrong. What's really going on is more accurately described as a living-wage shortage, a hazard pay shortage, a childcare shortage, a paid sick leave shortage, and a healthcare shortage. Unless these shortages are rectified, many Americans won't return to work anytime soon."

As IATSE members' potential strike drew near, the union pointed out that some of its members — stagehands and theater tech workers at North Shore Music Theater (NSMT) in Beverly, Massachusetts — secured livable wages after striking for just one day this month.

"NSMT crew were previously paid 60% less than the industry area average but will now be receiving wages starting at $18 per hour," said the union last week.

AFL-CIO president Liz Shuler told The Hill that the Striketober movement shows that with economic inequality "getting worse and worse... unions are the solution."

"This is the capitalist system that has driven us to the brink," Shuler said.

Unite Here, which represents 300,000 hospitality employees, expressed solidarity with the workers taking part in Striketober and urged them to see themselves as in a position of power.

"It is clear that we are in a significant moment for union organizing," said the union. "What we cannot do is lose this moment. The so-called 'labor shortage' — which we know is really just a shortage of jobs that pay us enough to live on — is a powerful bit of leverage workers have over employers right now."

"You know what scares bosses?" added Sara Nelson, president of the Association of Flight Attendants. "Worker solidarity. Striketober is terrifying the bosses."