"Archetypes": Meghan Markle would like to have a word, but the media circus won't hear it

Meghan Markle, Duchess of Sussex during the State Funeral of Queen Elizabeth II at Westminster Abbey on September 19, 2022 in London, England (Samir Hussein/WireImage)
--

Meghan Markle, through no overt effort on her part, exists in the bizarre state of being too much for large swaths of the public and not enough. Britain's monarchists never made life easy for Markle, but since she and her husband Prince Harry permanently stepped down from their duties as working royals, the royalist press and its true believers have been positively brutal.

This was on fresh display during the funeral proceedings for Queen Elizabeth II, where Markle made headlines for momentarily setting her lips in a way that offended some people, and, can you believe it, crying.

The problem is, horror of horrors, they're famous and capitalizing on that fame to make a living. Markle was a known factor before she met Harry due to her co-starring role in the popular USA Network drama "Suits," But her marrying into Britain's royal family catapulted her to a stratospheric level of celebrity few enjoy.

Markle can easily chat with tennis GOAT Serena Williams about the difficulties of being a woman, not to mention a woman of color, dominating arenas previously ruled by people who don't look like them, and the inhuman standards to which they're held compared to social and professional peers who are white and, in Williams' case, male.

Markle and Williams break this down on the royal's recently debuted Spotify podcast "Archetypes" in an episode about ambition and the ways that women are equally encouraged and discouraged from having it. The idea behind that episode and the other three in the podcast's debut season thus far is simple and far from original. We're presented with two household names discussing tribulations every woman faces.

Only the understanding behind this "Stars . . . they're just like us" energy is that we know they're not. Markle isn't only a member of the British royal family — she and her husband, Prince Harry, retain their titles as the Duke and Duchess of Sussex — but she's the first Black American woman to occupy that station.

That has placed Markle in rooms and amid conversations that most of the public were never meant to be a part of, which is the reason monarchists resented her while she was part of the system and enjoy fomenting rage towards her now that she's beyond its grasp.

Listening to "Archetypes" is akin to sitting on the bespoke couch belonging to a friend of a friend that invited you to a brunch at her mansion.

Markle also took a few hits for marrying into this exemplar of white supremacy, with some criticizing her identification with Blackness and even asserting that her children should not be thought of as non-white.

"Archetypes" is designed to obliquely speak to these perverse obsessions, establishing its mission as diving "into the labels that try to hold women back." In the way of many celebrity podcasts, the topics reflect her life experiences, be they the ones we know or others we may not consider. Helpfully, she doesn't make herself the main focus of these episodes, calling instead on high-wattage talent such as Williams and Mariah Carey, the subject of the second episode, to tell their own stories to which Markle — and, as the theory goes, many women — can relate.

Listening to "Archetypes" is akin to sitting on the bespoke couch belonging to a friend of a friend who invited you to a brunch at her mansion, where the host is friendly and down to Earth and invested in making you comfortable with the fact that she too came from humble beginnings.

Each episode opens with Markle sharing a personal story from her youth when she was not a duchess but merely a girl growing up in Los Angeles. The anecdotes relate to the week's topic; for example, she leads into her conversation with Williams by recalling the time she reacted to a casually sexist dish soap commercial by sending a letter to the company urging them to change it. Months later, they did. 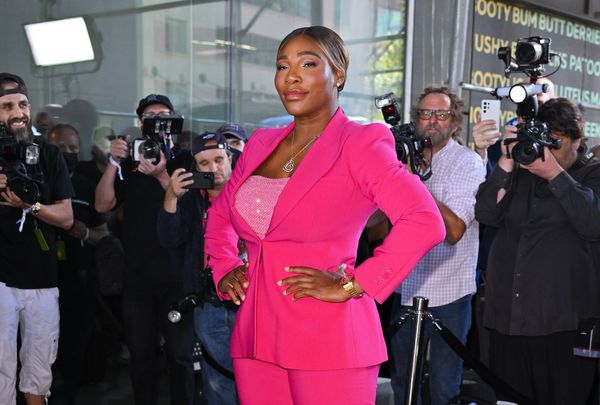 This told her that anything was possible, she said, then wondered why women are encouraged to curb the scope of their drive as they get older.

The opening episode of "Archetypes" was extensively covered in the international media, but if you were to read about it, you wouldn't have known that episode was about ambition. Instead, the clip most seized upon was a revelation that during an official royal tour in Africa, the couple was told about a fire in her son Archie's nursery. They were forced to continue to their next scheduled destination instead of canceling to stay with their baby — which, to any empathetic human being, is an understandable impulse.

Context, as always, is important. Markle's comment came after Williams spoke about the ways society punishes a woman's aspirational focus and the pressure placed on women to perform, especially after they become mothers. Williams shared what was happening behind the scenes of the French Open in the year she wore her famous catsuit.

The night before a decisive match, her daughter fell out of her high chair and broke her wrist. She and her husband didn't get home from the emergency room until 4 a.m. But she had to play and not only that, she knew she had to live up to expectations and win. Which she did.

That doesn't generate clicks. To achieve that, it's better to frame Markle's candid offering in the way of The Daily Beast's Royalist column: "After a summer of relative peace, Meghan Markle formally re-opened her war with the British royal family this week —and indicated that a fresh bombardment will take place, each and every Wednesday, for the next 11 weeks."

But the weird part about it is how this supposed "battle" is playing out through products and branding instead of direct words. Markle's conversation with Carey is nominally a discussion about the double-edged meaning of the "diva" label and the singer's reclaiming of it while doubling as a conversation about biracial identity.

And in that conversation, this became the main topic of interpretation. "It's very different because we're light-skinned," Markle says to Carey. "You're not treated as a Black woman. You're not treated as a white woman. You sort of fit in between. I mean, if there's any time in my life that it's been more focused on my race, it's only once I started dating my husband. Then I started to understand what it was like to be treated like a Black woman. Because up until then, I had been treated like a mixed woman. And things really shifted."

Nobody knows whether Markle is enacting a vendetta against the royal family. Normal humans would assume she'd simply rather be done with them and live her life with Harry, who Williams casually refers to as "H."

The weird part about it is how this supposed "battle" is playing out through products and branding instead of direct words.

That said, one can also glean satisfaction from watching royal "experts," many of them white men, contort themselves to speculate that Markle's average podcasting skills might somehow get in the way of maintaining the caliber of guests she's drawn in these opening episodes.

This, of course, discounts the fact that as long there are celebrities of color invested in seeing a Black royal succeed — and, as she's demonstrated, she has enough in her contacts to fill out a 12-episode season — she'll be fine. Case in point: Mindy Kaling sat down with her for the third installment before the season took a break out of respect for the death of Queen Elizabeth. The podcast resumed this week with interviews with Margaret Cho and journalist Lisa Ling. Upcoming installments feature the duchess in conversation with Robin Thede, Issa Rae and Ziwe Fumudoh, among others.

Living well is the best revenge, and even if that isn't the point, it's worth noting that "Archetypes" became the No. 1 on Spotify's global charts the week that it premiered, unseating Joe Rogan. That's enough to renew a person's impulse to cheer on the Sussexes.

Contractually speaking, they're well on their way to achieving that financial independence they announced they wanted in exchange for being freed from their royal duties. Shortly after decamping from Buckingham Palace, the pair landed a multi-year contract to produce content for Netflix. This was followed by scoring that Spotify contract, conservatively estimated to have netted them around $25 million. 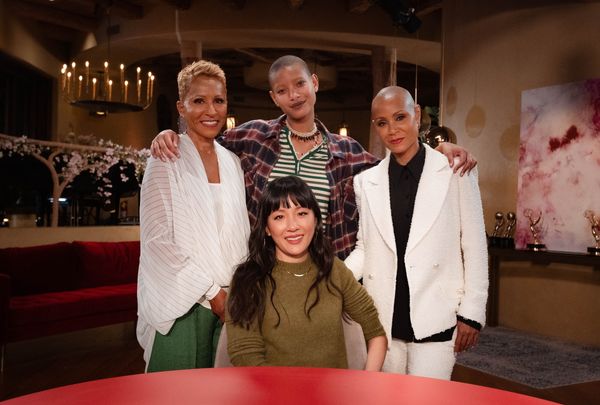 A larger question "Archetypes" raises is what it will morph into in the long term. Markle has an affable podcasting presence, but her approach isn't unique in this space.

Jada Pinkett Smith, her daughter Willow, and mother Adrienne Banfield Norris already staked their claim in the "celebrities contemplating real-world concerns" field via Facebook's "Red Table Talk." This week it made headlines as the place Constance Wu chose to go public with claims that a producer on "Fresh Off the Boat" sexually harassed her while she worked there, in addition to the revelation that she is a rape survivor. (Wu is also listed among the upcoming guests on "Archetypes.")

Pinkett Smith and her family have evolved "Red Table Talk" into a hybrid of celebrity healing circle and "Oprah"-style image rehabilitation destination, albeit one that replaces the studio audience with video calls from fans who can relate. It's very much still a vehicle for the hosts to address the issues they live with by showing they're simply the famous faces of a specific aspect of the human condition. Pinkett Smith demonstrated that by using the show to discuss living with alopecia after her husband's Oscar night debacle.

Ironically, in its current guise "Archetypes" shies away from that level of ambition, as Markle seems to prefer allowing her extraordinary friends and peers to provide evidence that the slanders she's endured aren't unique to her. It's a highly strategic way to make the case that her humanity is as worthy of being honored as anyone else's without specifically making it about her.

Why bother? The press is happy to do that for her, as it did with this week's episode in which Cho and Ling break down the "dragon lady" stereotype that pervades American popular culture and is seen as contributing to violence against Asian women. Among the examples illustrated with audio clips are outtakes from an "Austin Powers" movie and "Kill Bill: Vol. 1," before Markle and her guests launch into a discussion about the weight of being one of few representatives of one's culture in any pop culture forum.

Cho, for example, became the first Asian American to headline a broadcast sitcom. There wouldn't be another woman in her position until Wu co-starred in "Fresh Off the Boat." Markle, for obvious reasons, can relate.

For equally obvious reasons, The Daily Mail refuses to. "Now Meghan takes on Hollywood over 'Asian stereotypes'" its headline blares. Much of the coverage is making her point by refusing to get it, which also benefits "Archetypes." There may be no better free promotion than media coverage capitalizing on the fact that the Duke and Duchess of Sussex live rent free in the heads of millions of their haters, and are getting equally famous people to share that space.