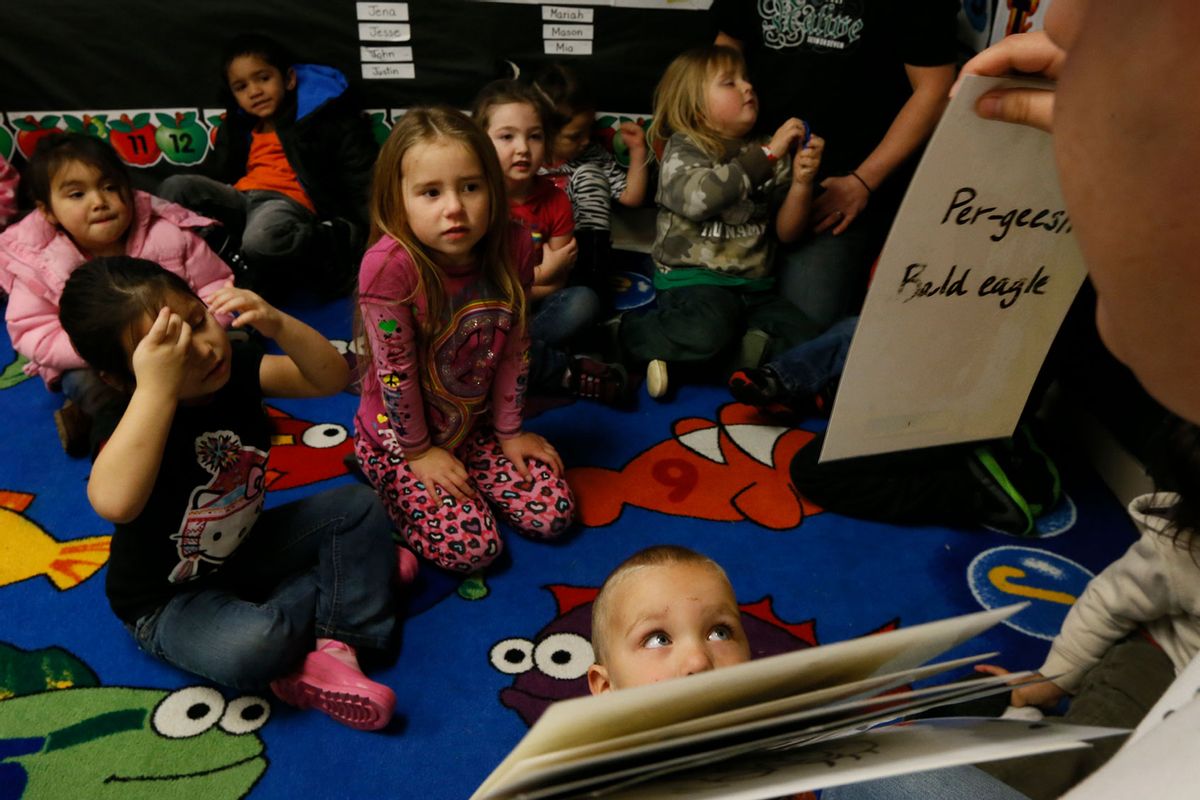 Whenever November would roll around, James Gensaw, a Yurok language high school teacher in far northern California, would get a request from a school administrator. They would always ask him to bring students from the Native American Club, which he advises, to demonstrate Yurok dancing on the high school quad at lunch time.

"On the one hand, it was nice that the school wanted to have us share our culture," Gensaw told me during an interview. "On the other, it wasn't always respectful. Some kids would make fun of the Native American dancers, mimicking war cries and calling out 'chief.'"

"The media would be invited to come cover the dancing as part of their Thanksgiving coverage, and it felt like we were a spectacle," he continued. "Other cultural groups and issues would sometimes be presented in school assemblies, in the gym, where teachers monitored student behavior. I thought, why didn't we get to have that? We needed more respect for sharing our culture." James Gensaw's work in California's public high schools as a Yurok language teacher and mentor to Native American students is part of a reckoning with equity and justice in schools.

Tribal officials say Gensaw is one of 16 advanced-level Yurok language-keepers alive today. An enrolled Yurok tribal member, Gensaw is also part of the tribe's Yurok Language Program, which is at the forefront of efforts to keep the Yurok language alive.

Today, the Yurok language is offered as an elective at four high schools in far northern California. The classes meet language instruction requirements for admission to University of California and California State University systems.

Yurok language classes are also offered in local Head Start preschool programs as well as in some K-8 schools when there is teacher availability, and at the College of the Redwoods, the regional community college. To date, eight high school seniors have been awarded California's State Seal of Biliteracy in Yurok, a prestigious accomplishment that signifies commitment to and competency in the language.

When I started researching the effects of Yurok language access on young people in 2016, there were approximately 12 advanced-level speakers, according to the Yurok Language Program. The 16 advanced-level speakers in 2022 represent a growing speaker base and they are something to celebrate. Despite colonization and attempts to eradicate the Yurok language by interrupting the transfer of language from parents to their children, Yurok speakers are still here.

Throughout the 19th and 20th centuries, boarding schools in the United States operated as spaces for what I refer to as "culturecide" — the killing of culture — in my latest book, "Indigenous Language Politics in the Schoolroom: Cultural Survival in Mexico and the United States." Students in both the United States and Mexico were often made to attend schools where they were beaten for speaking Indigenous languages. Now, new generations are being encouraged to sign up to study the same language many of their grandparents and great-grandparents were forced to forget.

The Yurok Tribe made the decision years ago to prioritize growing the number of Yurok speakers and as part of that, to teach Yurok to anyone who wanted to learn. They have many online resources that are open for all. Victoria Carlson is the Yurok Language Program Manager and a language-keeper herself. She is teaching Yurok to her children as a first language, and she drives long distances to teach the language at schools throughout Humboldt and Del Norte counties.

"When we speak Yurok, we are saying that we are still here," Carson said in an interview with me, echoing a sentiment that many Yurok students relayed to me as well. "Speaking our language is a form of resisting all things that have been done to our people."

The students in Mr. Gensaw's classes are majority, but not exclusively, Native American. Through my research I learned that there are white students who sign up out of interest or because nothing else fit in their schedule. There are Asian American students who wish that Hmong or Mandarin was a language option, but they take Yurok since it is the most unique language choice available. And there are Latinx students who already are bilingual in English and Spanish and who want to challenge themselves linguistically.

In my book and related publications, I document how access to Indigenous languages in school benefits different groups of students in a range of ways. Heritage-speakers — those who have family members who speak the language — get to shine in the classroom as people with authority over the content, something that many Native American students struggle with in other classes. White students have their eyes opened to Native presence that is sorely missing when they study the Gold Rush, Spanish missionaries in California, or other standard topics of K-12 education that are taught from a colonizing perspective. And students from non-heritage minority backgrounds report an increased interest in their own identities. They often go to elders to learn some of their own family languages after being inspired that such knowledge is worth being proud of.

Bringing languages like Yurok into schools that are still, as historian Donald Yacovone points out, dominated by white supremacist content, does not in and of itself undo the effects of colonization. Getting rid of curricula that teach the Doctrine of Discovery — the notion that colonizers "discovered" the Americas and had a legal right to it — is a long-term process. But placing Native American languages into public schools both affirms the validity of Indigenous cultural knowledge and also asserts the contemporary existence of Native people at the same time. It is a place to start.

One step at a time

In my experience, as a researcher on education policy and democracy, I have found that putting more culturally diverse courses in school is something that better prepares young people to learn how to interact in healthy ways with people who are different from themselves.

Gensaw, the Yurok language teacher, is at the forefront of this. One year when he was again asked if he could bring the students to dance around Thanksgiving time, he said yes, but not on the quad. He requested a school assembly space where student behavior could be monitored. The school said yes, and the students danced without being demeaned by their peers. These steps are just the beginning of what it takes to undo the effects of colonization.