Biden has nominated Garcetti as next U.S. ambassador to India. His record in L.A. suggests he's unfit to serve 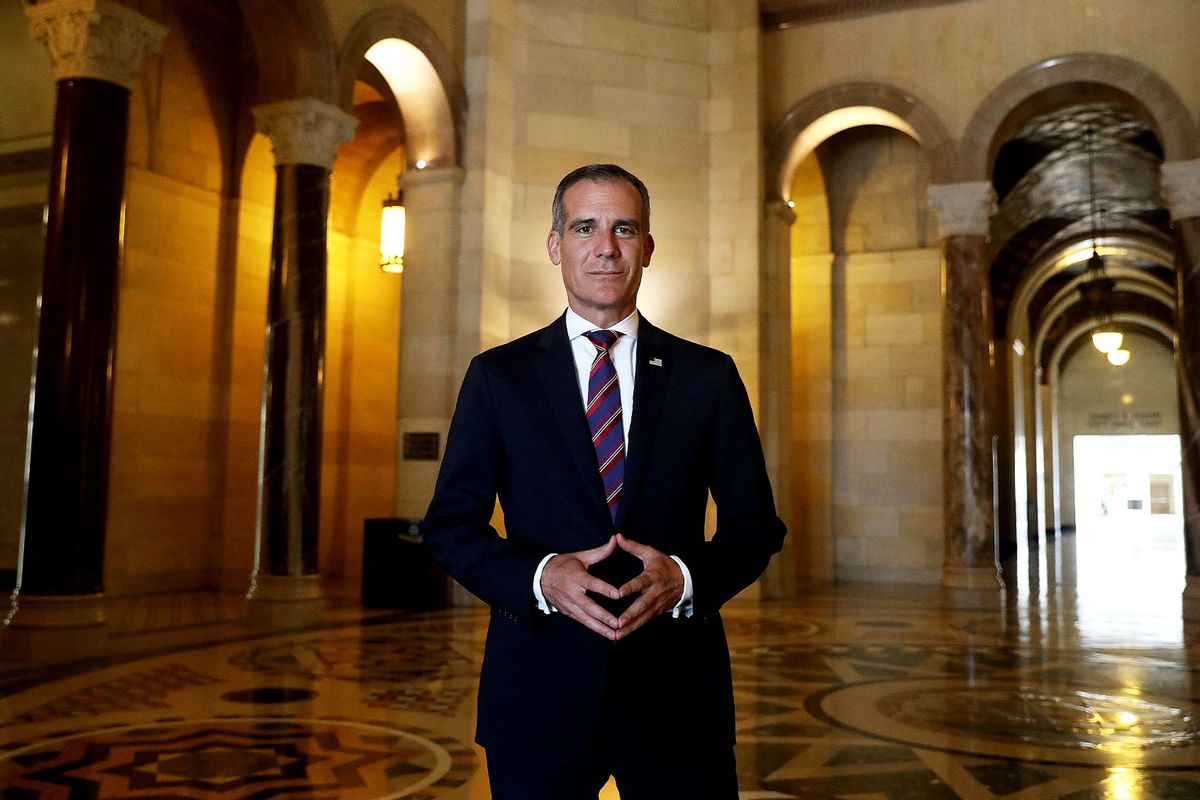 Eric Garcetti, the outgoing mayor of Los Angeles, has been waiting almost 500 days for a Senate vote on his nomination as U.S. ambassador to India, and a narrative has taken hold in Washington that partisan politics are to blame for the extraordinary delay.

Garcetti, after all, is a high-profile political ally of President Biden's, one of the earliest champions of his White House run in 2020, and a regular punching bag for Republicans who like to portray L.A. and other heavily Democratic large cities as cesspools of homelessness, crime and liberal values run amok.

The narrative, though, is wrong and needs to be corrected, especially since Democratic leaders may now be considering bringing Garcetti's nomination to the Senate floor in the waning weeks before the turnover to a new Congress.

The fact is that Garcetti enjoyed strong support from both Republicans and Democrats for several months after he was nominated, sailing through his Senate Foreign Relations Committee hearing without a single dissenting vote on either side of the aisle. What changed was that my organization, Whistleblower Aid, came forward with compelling evidence that Mayor Garcetti had allowed sexual harassment and abuse to run rampant in his administration for years and then lied about it under oath in his Senate confirmation hearing.

After filing our initial complaint in February, we spoke to dozens of Senate offices, both Republican and Democrat, and many of them expressed concern about Garcetti's fitness to serve based in part on the evidence we presented. Sen. Chuck Grassley, an Iowa Republican, commissioned a report of his own, produced by his investigative staff on the Senate Judiciary Committee after an in-depth investigation of documents and numerous victims, which confirmed and in some cases amplified our findings, concluding that Garcetti either knew about the abuse or should have known.

Senators placed at least two holds on the nomination, meaning that it could no longer go through with an up-and-down vote but required floor time for debate. Despite continuing pressure from the White House to push the nomination through regardless of mounting disturbing concerns, several Democrats — including Mark Kelly of Arizona, Mazie Hirono of Hawaii and Kirsten Gillibrand of New York — indicated publicly that they either needed to look into the matter further or were reluctant to support Garcetti. The cross-party consensus over the summer was that the nomination was "dangling by a thread."

Garcetti has been unable to redeem himself since the summer — despite the efforts of expensive lobbyists hired by his parents. If anything, the case against him has become more compelling as new witnesses have come forward to corroborate allegations that Garcetti knew his longtime top aide, Rick Jacobs, routinely cowed City Hall staffers by kissing them on the mouth, massaging them, locking them in long and unwanted bear hugs, grabbing their buttocks, and using crude sexual and racist language in the office.

Sworn testimony from a lawsuit filed against the city of Los Angeles, along with texts, emails and other documentary evidence, indicate that this abusive behavior was common knowledge in the Garcetti administration and that the mayor not only knew about it but often witnessed it himself and did nothing to stop it.

Despite heavy pressure from Garcetti's senior staff to keep quiet about what they know, about a dozen people, most of them City Hall insiders with long track records in Democratic Party politics, have described their experiences of Jacobs' behavior and of the mayor's private acknowledgments that his most trusted confidant was a lawsuit waiting to happen.

During his Senate confirmation hearing, Garcetti insisted he never saw Jacobs behaving inappropriately and was never told about any problems with him. "I also want to assure you," he went on, "that if it had been [brought to my attention], I would have immediately taken action to stop that."

The evidentiary record, however, suggests otherwise. Garcetti, his wife, his chief of staff and Jacobs himself all acknowledged, when interviewed for a city-commissioned investigation, that Jacobs would often kiss people on the mouth at city-related social events. Garcetti's former chief legal counsel testified in a lawsuit deposition that Jacobs once pushed himself against her in a Senate building elevator and was so insistent that the mayor had to tell him to "cut it out" — a story Garcetti has never denied.

Our client, former mayoral communications director Naomi Seligman, testified under oath that the mayor was present on multiple occasions when she saw Jacobs touching members of the mayor's security detail. One of those security officers, Matt Garza, is the plaintiff in the lawsuit against the city and alleges that Mayor Garcetti would sometimes laugh when Jacobs made crude remarks about him.

Garcetti's shameful record as an enabler of sexual abuse is not a partisan matter. Senators of both parties are rightly concerned that an ambassador in a politically vital country needs to be able to speak with a clear moral voice, particularly given India's record of rampant sexual violence against women. Such a record does not just make Garcetti unfit to be confirmed. It should be disqualifying for anyone seeking any public office, anywhere.