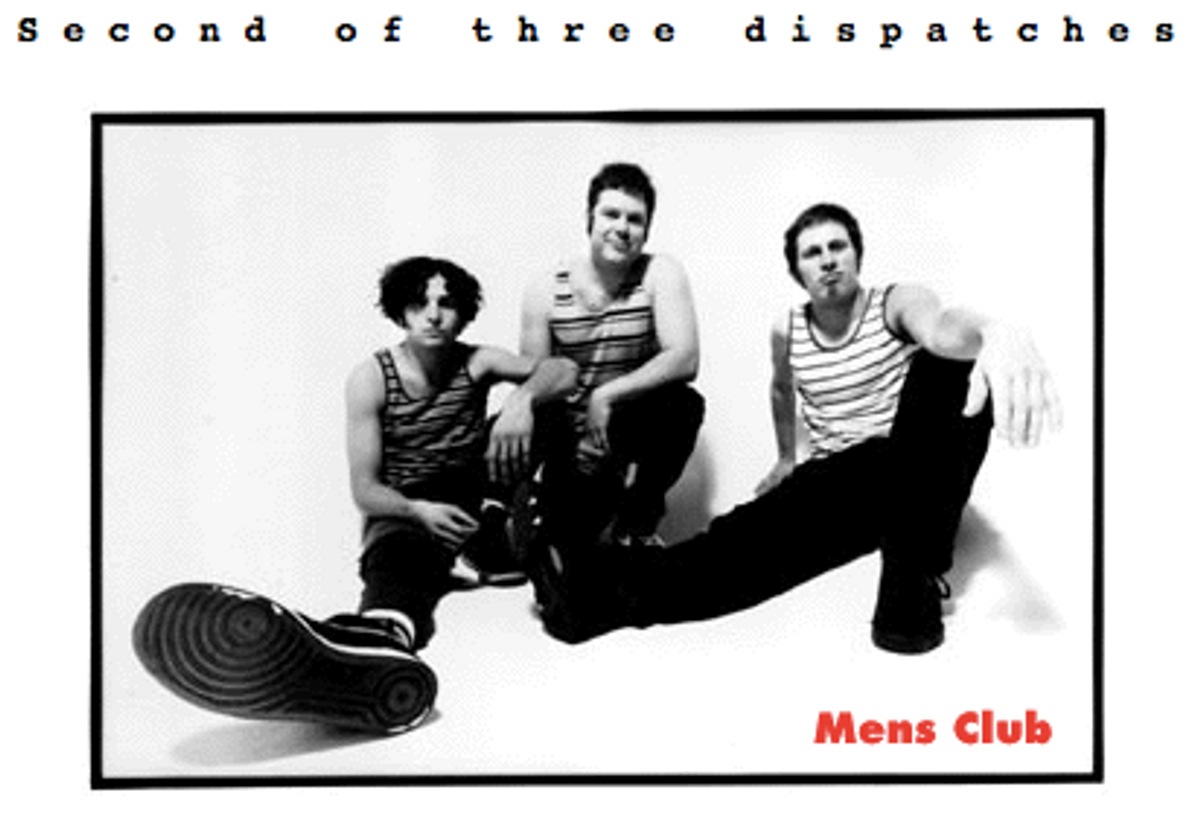 It's 2:14 a.m. and I am ready to drop. Not good, considering this is only the first night of Austin's South by Southwest, the most mambo music festival in the States, maybe the world, and there are three full nights left to go.

I started the night at the Paramount Theatre, checking out the world premiere sneak preview of John Sayles' film "Lone Star." Reporters were absolutely forbidden to write about it, but I think I can say you really must see it when it comes out.

Then it was off to the Driskill Hotel, where I watched Mens Club, a rocking San Francisco trio, speed their way oh-so-tightly through an amazing set. No time for post-show schmoozing either, despite the familiar faces around me. SXSW is not unlike high school in that, when the "bell" rings in the form of the last song (and they hustle those bands on and off in forty minutes), you have precisely 20 minutes to get to the next gig, no matter how far away that gig might be.

I run-don't-walk to Liberty Lunch, damn near a mile away, to catch Fred Schneider. It's a far cry from Schneider's days as a B-52, but no one cares. We're all there for THAT voice, and old Freddy does not disappoint. He stands, decked in a yellow-poly socceresque-shirt, flanked by suit-wearing young boys who jam out. Three songs into it, despite feeling a crush I never knew I had, I must scoot before the bell rings, because Schneider's gig overlaps with the Throwing Muses, playing four blocks away.

The Muses are a tight lot. Kristen Hersh's eyes shoot blue beams across the crowd. She is clearly in control—not oblivious, not rude, not indifferent, just lost in her own rock world, a fact she readily admits in between-song banter. As with all shows, I easily belly to the front for a good look, then slip to the back. In this case, an excellent move. I spot Vic Chestnutt, singer-songwriter extraordinaire, a man who happens to be a paraplegic, but let's not give that too much press—I mean, I don't think it's a gimmick.

Sometimes, and this is one of them, I can't help myself. I drop to the floor at Vic's feet and ask if he minds if I say I love him. He does not. He asks me to "block him" with my decent-sized chest and I do—allowing him a discreet drag off his one-hit pipe. I drool a minute more and slip away. Hammell on Trial awaits me.

I jog another half-mile, my cowgirl boots now bringing callouses. Ed Hammell, the sole member of H on T, is just taking the stage at the Electric Lounge, a stage he once took every Friday night until he left Austin for New York and Mercury Records. Ed is so obviously pumped to be back, and the audience so clearly enthusiastic to have him, that the happiness hurts me to the core. In a two-second break betwixt songs, I turn to a friend and ask, "What's the name of his record?" I am too loud. Ed asks the crowd to join him in chiding me. I am miffed, but since Ed can bang out something on his acoustic six-string that even a young Pete Townshend might hush for, I shut up.

Finally, it's off to Coffee Plantation, this time in a cab, because my callouses are threatening to bleed. Back on Sixth Street, the heart of it all, I watch the parade of fashions wrapped around human flesh, feeding itself with pizza, stumbling tired like me. San Franciscan Jeff Krebs takes the stage with his bass player and drummer. I already know how good he is. I have his CD, "Songs of Love and Death" (self-released), and I am at least as happy as he is that he's made the SXSW cut. Despite the late hour and the thin crowd, he rocks out, a true artist oblivious to a near hollow room.

One more cab home, to sleep a few hours before tomorrow. As the cabbie drives a leisurely two miles-per-hour, I realize the difference between Austin and New York. Here, the cab drivers drive like your grandfather. And no one gives air kisses. We run into each other and kiss, on the lips, so happy to be a part of this all.