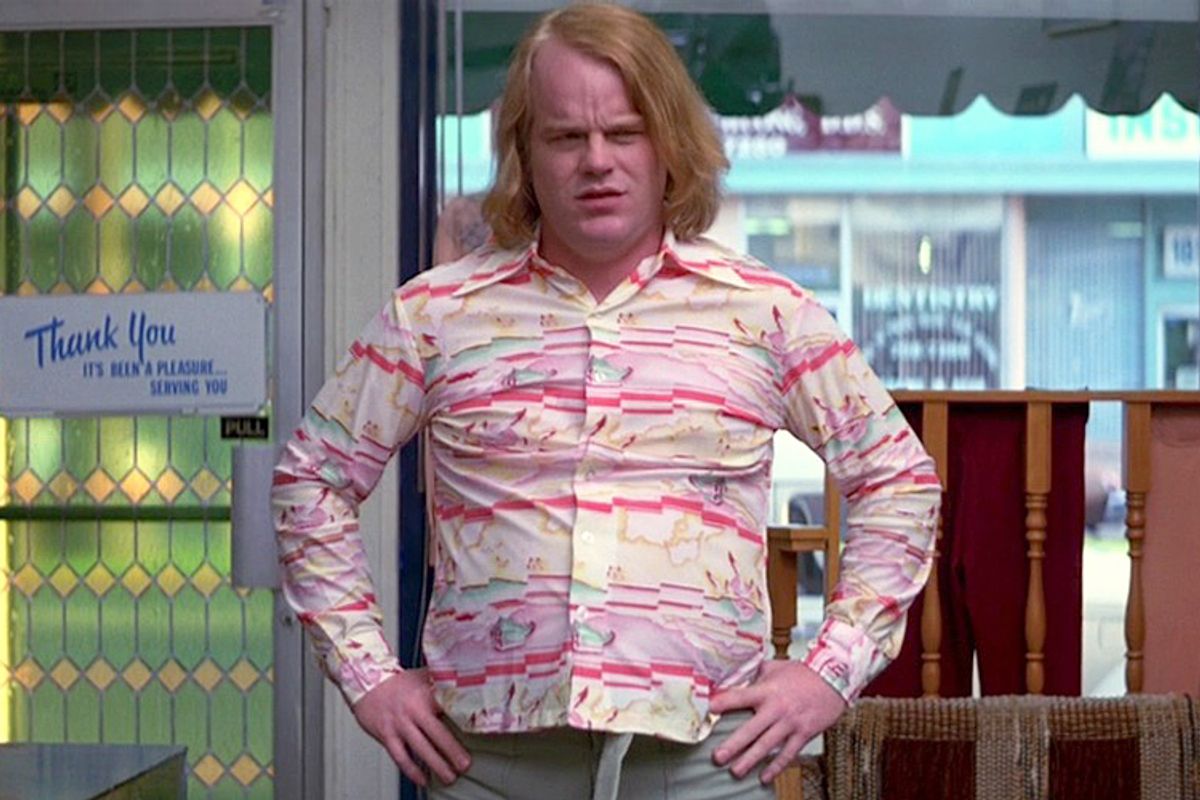 SO, WHADDYA WANNA BE?" asks adult filmmaker Jack Horner (Burt Reynolds) of disco-club dishwasher Eddie Adams (Mark Wahlberg) in the opening scene of "Boogie Nights." That's the question that hovers over all the characters in this epic-scaled (two-and-a-half hours) comic elegy for the California porn industry of the '70s and '80s. But it hovers over none of them as much as it does the film's young writer-director, Paul Thomas Anderson. "What do I want to be?" he might be asking, and his answer is on the screen, as naked as his sex superstars and wannabes. Anderson wants to be Robert Altman and Martin Scorsese, Quentin Tarantino and the young Jonathan Demme. He wants to be the new movie-mad Wunderkind, packing them in at the art houses and the multiplexes. He wants to be the hot fucking dog of American movies in the '90s.

It's been a while since a young filmmaker was as bald about his ambitions as Anderson is here. His first picture, the earnest, noirish drama "Hard Eight," had a disciplined control unusual for a first-time director. In "Boogie Nights," only his second movie, he's attempting the tricky panoramic structure of "Nashville." Characters cross one another's paths, veer off into their own private orbits and rendezvous in all sorts of ways. So far, Anderson's dazzle is much more accomplished than his depth. When he's on, "Boogie Nights" can give you tingles of anticipation. When he's off, the disappointment can be worse than the lows of an ordinary bad movie, because he fails to make good on the promise of the picture's best parts.

What's not in doubt is that Anderson is a real filmmaker. By that I don't mean that he's got a run of slick camera moves up his sleeve (so does every two-bit music-video director), but that he has a command of narrative, affection for his characters and an understanding of their inner workings, an instinct for where to place the camera and a knowledge of how to direct actors, whom he clearly loves. If Anderson is sometimes a showoff (you have to be when you're working on this scale), he knows what he can't fake. "Boogie Nights" is truly audacious because Anderson doesn't beat you over the head with his daring. In the first half, he goes about turning conventional morality on its head nonchalantly, almost sweetly.

Certainly, there's sweetness in Jack Horner's relationship with Eddie. When Jack meets 17-year-old Eddie, it's 1977 and Eddie is busing tables in a Reseda disco. At home in his room, practicing Bruce Lee moves in front of his mirror, or in bed with his adoring girlfriend (the impishly sexual Laurel Holloman), Eddie fantasizes that he's destined for stardom. "Everyone's blessed with one special thing," he says. In the, uh, cockeyed tradition of American success stories, the talent that points Eddie toward the pathway to the stars is between his legs. By the time Jack convinces Eddie that he can make that one special thing pay off, Eddie's ready to make his move.

Not since Jonathan Demme's "Citizen's Band" and "Melvin and Howard" -- equally loving looks at the cracked schemes of American fantasists -- has an American comedy found a tone that's as simultaneously satirical and sympathetic as the one Anderson gets here. Almost everyone in "Boogie Nights" dreams of being something else. There's Dirk's on- and off-screen sidekick, curly-haired Reed Rothchild (John C. Reilly, with his mashed face and overhanging brow), who's convinced he looks like Han Solo and has what it takes to be a great magician; the pot-bellied club owner T.T. Rodriguez (Luis Guzman), who wants to be porno's great Latin lover; Buck Swope (sad-faced Don Cheadle), who sees his earnings in adult movies as the ticket to his dream of opening his own stereo store; crew member Scotty J. (Philip Seymour Hoffman), who does his pudgy, baby-faced best to imitate the studs around him, including Dirk, whom he's in love with.

There's no bigger dreamer than Jack, who sees his career in terms of the question, "How do you keep them in the theater after they've come?" Jack believes in himself as a filmmaker who'll one day make the first adult film that's also a work of art, and his belief is infectious. His actors share his conviction that they've embarked on something great, none more than Dirk. That must be something like the opportunity Anderson extends to Reynolds and Wahlberg, who seize their roles as the chance to prove themselves to be something other than jokes. As Wahlberg plays him, Dirk is all earnest, open-faced enthusiasm; it's a terrifically appealing performance. He regards everything around him with the grateful disbelief of someone who's landed in a lifelong dream. Dirk Diggler may be porno's ace stud, but Eddie's such a polite kid he makes sure that the women he's performing with are enjoying themselves. It's both funny and touchingly naive when he asks, "Did it look sexy?" after he finishes a scene.

In "Boogie Nights," video spells the end of Jack Horner's dreams. Anderson is sharp enough to see the cultural irony in this: porn becoming more widespread and retrograde than ever when the country, electing Reagan, took its most conservative turn. Dramatically, he's got himself in a pickle. "Boogie Nights" is both a show biz and a drug movie, genres that typically follow a downward trajectory. Anderson doesn't gloss over the porn world. We see that Jack's bankroller, The Colonel James (Robert Ridgely), has a taste for underage girls, and that the Colonel's boss, the wonderfully named Floyd Gondolli (Philip Baker Hall), is probably mob-connected. The problem is that, after the exhilarating, nonjudgmental freedom of the first half, it's hard not to get the idea that the characters who are becoming cokeheads or who are reduced to making stuff that recalls the most primitive stag reels are being punished. That's clearly not what Anderson intends. He adores his characters, and when we see them being unfairly judged by outsiders, he doesn't shortchange their hurt. But Anderson expresses himself best and most emotionally in comedy, and when the movie loses its comic sense, we're stuck with his dramatic scenes, which tend to be schematic and thin.

There's also a bigger problem: the influence of Scorsese and Tarantino. Anderson isn't the only young filmmaker to be influenced by those directors, and there's more joy in Anderson's aping of the virtuoso camera moves of "Goodfellas" than there is in Scorsese's own film. But it's depressing that, as with so many other young filmmakers, the Scorsese Anderson reveres isn't the impassioned expressionist of "Mean Streets" and "Taxi Driver" but the mannered technician Scorsese has become. Scorsese's recent distance from his material is what Tarantino picked up on and what Anderson -- disastrously -- cops from Tarantino.

The gut-wrenching anticipation of violence in a Peckinpah or a De Palma film comes from how deeply involved you've become with the characters. The anticipation of violence in a Tarantino movie is simply the expectation of a gross-out. Anderson is a much better filmmaker than Tarantino (for one thing, he directs actors; Tarantino collects them), but he shares a similar amusement over dope and guns and beatings that's both puerile and arch. And when Anderson puts the characters we've come to feel for at the service of that impulse he reduces them to mere attractions in a gutter-life theme park.

Anderson is so eager, and he's working on such a big canvas in "Boogie Nights," that he hasn't bothered to distinguish his good instincts from his bad ones. (They're both visible in the picture's wish-fulfillment finale, which manages to both restore the film's comic tone and turn it unexpectedly sour.) And neither have the critics who've greeted the film rapturously. It would be a shame if such great things were expected of him that he wasn't given a chance to mature. This kid's got a real rocket in his pocket. He just needs to remember, it's not the meat, it's the emotion.