An American reporter faces 10 years in a brutal Indonesian jail. His crime: Refusing to turn away from acts of inhumanity. The United States must act -- now. 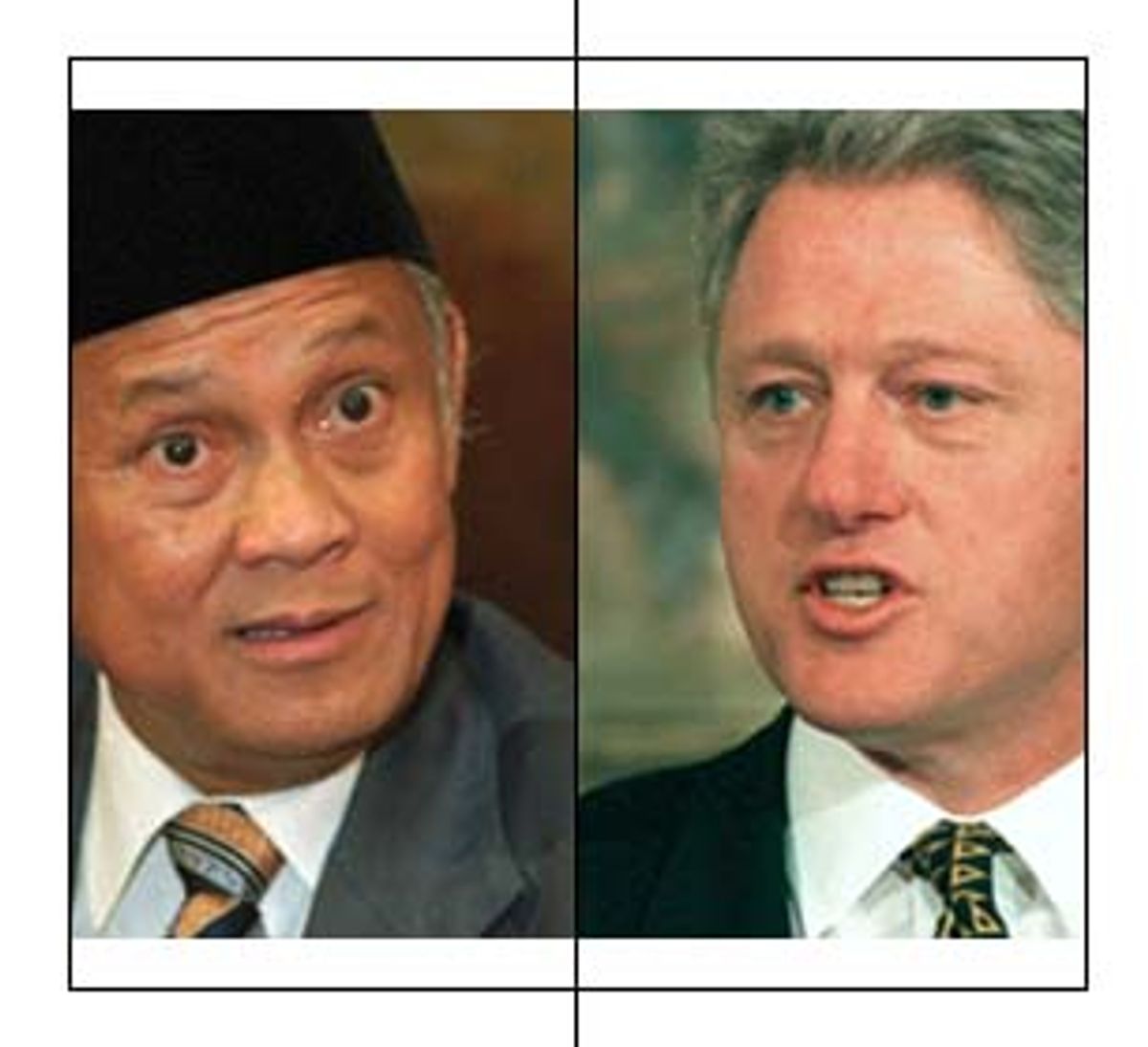 The voice on the other end of the phone was as clear and ordinary as if calling from the corner coffee shop. "How are you?" I asked. "I'm all right," Allan Nairn said. But Nairn was not "all right." He was locked up in a military camp in East Timor, detained in a room with a phalanx of armed Indonesian soldiers. He did not know what would happen next. But he did have a message for my colleagues at the Nation: "Tell them I'll still file a story if I can get my stuff back."

Nairn, this country's preeminent human-rights investigative reporter, did not get his stuff back. He is still locked up under armed Indonesian guard. And Thursday night, I learned from U.S. State Department officials in Jakarta that Indonesia's regime -- whose brutality the world has gotten a glimpse of in East Timor over the last few weeks -- plans a criminal show trial of Nairn that could place him in prison there for 10 years.

In the early morning hours last Sunday, Nairn was walking the streets of Dili taking notes. Most reporters had evacuated East Timor days earlier, fleeing the reign of terror by government-backed militias opposed to East Timor's independence vote. But Nairn, who once had his skull cracked by Indonesian soldiers in these same streets, and who had entered the country in
defiance of an official order barring him as a security threat,
decided to remain, sleeping in the U.N. compound and dodging from burned-out house to burned-out house. He saw hacked bodies piled in the streets, a city reduced to ruins. Suddenly he was surrounded by an armed militia gang, which took him into custody. They took him to Dili's military barracks, where, he told me, the militias mingled freely and jovially with the soldiers supposed to police them.

Citizens slip across national boundaries all the time. When they are caught, they are deported. When Nairn was picked up in Dili last week, most of his friends thought that would happen. He was treated relatively well, allowed to retain his cellular phone. He even gave a long interview to public television's "Newshour," describing what he saw on Dili's streets.

But the detention dragged on. He was transferred under military guard to a holding center in West Timor, home base of those same furious militias who torched Dili and hacked the East Timorese with machetes. Friday, the other shoe dropped: He was informed that the police would commence a criminal prosecution. He should get a lawyer and an interpreter. He will soon be transferred to the custody of police and a restrictive criminal jail, and probably lose his telephone lifeline.

The investigation (not that there is anything to investigate, since Nairn freely admits he entered the country in defiance of his ban) will go on for two months or more. Then he will go on trial, for "crimes" -- most likely violation of immigration laws, though exactly what he will be charged with remains unclear -- that could earn him 10 years in one of the most brutal prison systems in Asia. When I asked a State Department official what rights Allan would have if he is charged, he replied with silence, then added: "Well, this is Indonesia."

While the prosecution seems driven by regional authorities responsible for Timor, informed U.S. officials believe it would not be moving forward without approval from the highest levels of government, including Justice Minister Muladi. President B.J. Habibie and Gen. Wiranto of the military seem to see prosecution of Nairn as a way to appease nationalists angry over losing East Timor.

State Department and National Security Council staffers I have spoken with hoped that gentle diplomacy would free him and for several days kept a low profile -- a little like the State Department officials portrayed in the film "Missing," about Americans caught up in the violent Chilean coup of 1973. But as one of them put it to me, none of the buttons they pushed worked, and "this has become a political matter." National Security Council spokesman Mike Hammer says that "we are in close contact" with Nairn, that Ambassador Roy Stapleton is meeting with Indonesian cabinet officials and that "we hope Indonesia will continue to uphold its obligations under international human rights conventions."

But the most influential voices -- those of Secretary of State Madeleine Albright and President Clinton, for instance -- have yet to be heard while an American journalist languishes under Indonesian guard. If American officials hoped "quiet diplomacy" would work, so far they have been mistaken.

As yet, no American newspaper has assigned its own reporter to cover Nairn's detention (though the Washington Post ran a brief Reuters dispatch). A few voices are beginning to speak up, however. Today more than 60 influential writers, academics and politicians -- including Sens. Russ Feingold and Paul Wellstone, Reps. Jim McGovern and Cynthia McKinney, playwright Harold Pinter, author Mary Gordon and scholar Noam Chomsky -- signed a letter to Albright urging the State Department to make Nairn's case a higher priority. It's a letter I was honored to participate in.

It was not surprising that Nairn was in East Timor -- or that he was picked up. You may have never heard of Nairn before, but if you ever heard of East Timor prior to last week there is a good chance it was because of his relentless reporting for nearly a decade. On his first trip to the province in 1991, he, along with Pacifica Radio's Amy Goodman, were covering a forbidden demonstration by pro-independence activists. As the march passed a churchyard, Indonesian soldiers opened fire, killing dozens. Nairn, holding forward his American passport, had his head bashed in by an Indonesian soldier's American-made rifle-butt. He was deported, and he wrote about the massacre in the New Yorker and USA Today.

After that, Nairn was declared persona non grata in Indonesia: forbidden to enter Indonesian territory as a threat to national security -- which, in a sense, he was. But Nairn, who has reported on human-rights abuses in some of the poorest countries on earth, including Guatemala, El Salvador and Haiti, slipped back into East Timor time and again over the last seven years, filing stories that among other things convinced Congress to cut off military aid to Jakarta in 1993. By covering the election and subsequent massacres, he was doing the job of any good journalist: bearing witness in defiance of abusive authority.

Nairn's arrest is part of a broad campaign of intimidation aimed at reporters in East Timor documented over the last month by the Committee to Protect Journalists: correspondents shot at, threatened with stabbing, harassed. The militias and their military patrons, which United Nations Human Rights Commissioner Mary Robinson has found to be working hand in glove, clearly sought to remove all witnesses to the territorial cleansing they carried out after East Timor voted overwhelmingly for independence.

But there is also a special enmity toward Allan Nairn in Indonesia's corridors of power. He has reported meticulously on the workings of Indonesia's feared secret police, the military's links to the Pentagon and American intelligence agencies. He is a passionate reporter, but one careful enough to win the Robert F. Kennedy Journalism Award, the prestigious George Polk Award for Foreign Reporting and a host of others. He helped found the East Timor Action Network, a transnational group that gets much credit for keeping world attention on a province of 800,000 that saw one-third of its population killed following Indonesia's invasion in 1975 (an invasion given explicit backing by the Ford administration).

A few years ago, I invited Nairn to talk with my journalism students at Yale University. He talked about the craft of human-rights reporting under dangerous conditions -- finding a stash for your notes, how to talk coolly with perpetrators of the most horrific crimes. (An ability to make sources out of perpetrators as well as victims is one of the hallmarks of Nairn's reporting; he has won the confidence of CIA "assets" in Haiti and written chilling profiles of torturers in Central America.) He talked about combining on-the-scene reports with precise documentation from government sources: going over shipping manifests to trace arms flow, for instance. My students sat with eyes wide open as a master investigative reporter opened his toolbox.

But the students also asked him about his deeper motivations -- which today have landed him in such profound jeopardy in the Pacific. Why, for instance, do so many of his stories (including those on East Timor) focus on U.S. complicity with these brutal regimes? Is he anti-American? No, he replied, the United States has no monopoly on the abuse of power. But since I am an American, he told them, this is where I have some influence and responsibility. And where does his insistent focus on human rights come from? It is really not all that unusual, Nairn insisted, just a normal impulse of solidarity too often suppressed. "If someone were attacking your mother, you would defend her. If someone is being tortured, you defend them. It comes from the same place."

Over pizza with those students, Nairn talked about one other thing: East Timor, which none of them had ever heard of. He recounted some of Indonesia's more repressive day-to-day measures: Counting heads around the table, he pointed out that in East Timor, "this would be an illegal meeting." Then he looked at the next table over and added, "and he would be a secret police agent."

Nairn himself would prefer that his incarceration be yet another reason to focus attention on the beleaguered Timorese. His treatment remains respectful compared to what his friends and contacts in Timor -- those who have survived -- have suffered. Indonesia's scorched-earth compliance with the independence vote has left Dili a ghost town, and starving Timorese taking refuge in the mountains. Indeed, his incarceration casts a bleak light on the prospects that Indonesia will comply with the United Nations over the future of East Timor.

Allan Nairn has brought honor to his profession, redeeming it from the meretricious camp followers who pass for reporters and pundits. Now that he is in trouble, it is essential that his colleagues, his country's leaders and anyone concerned with
the most basic human rights raise their voices loudly and clearly in his defense.