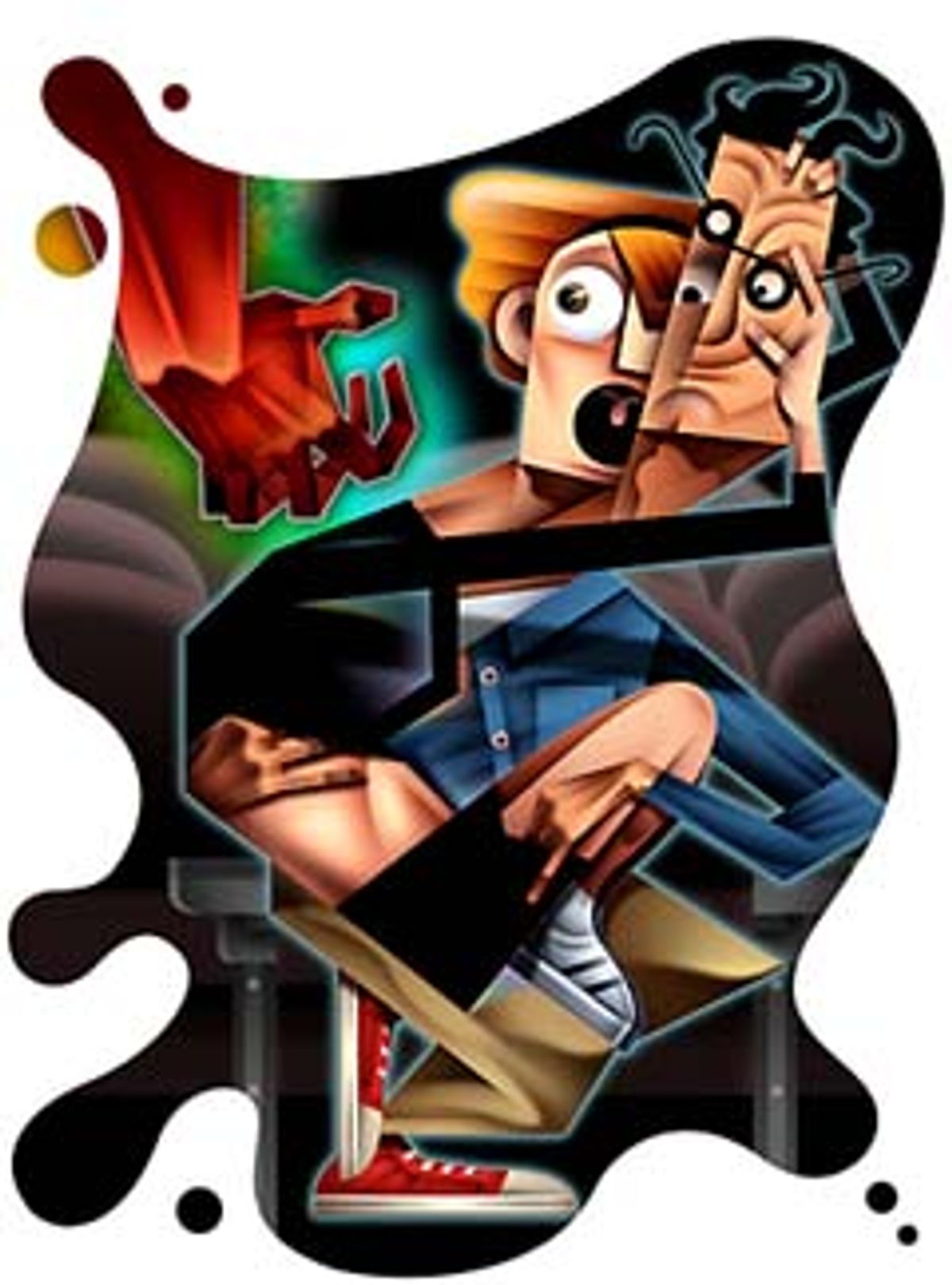 Seeing "The Blair Witch Project" had been my idea. I had a Sunday night date scheduled, and I'd savored the prospect of nestling into the crook of my suitor's arm as I absorbed the pop-cultural event that had the whole country buzzing. I could relieve some sexual tension and some peer pressure simultaneously: beautiful.

For most of the film, I was fine. Bored, even. I began wondering whether my companion and I would discuss the movie afterwards, and (more pleasantly) how we might pass the remainder of the evening if we didn't. Unfortunately, three segments -- which I trust "Blair Witch" viewers will recognize as the disappearance scene, the bloody bundle scene and the final cabin scene -- so unnerved me that, upon exiting the theater, my date said I was visibly shaken.

Walking back to my building, my date -- a sophisticated and somewhat older man -- seemed pretty calm to me, which compounded my discomfort at letting him witness my wordless freak-out. I was sufficiently spooked that I would have appreciated an overnight guest -- but on the other hand, this was a second date, and I wasn't ready for that. I couldn't ask him to spend a chaste night with me just so he could alleviate the fallout of my fright, could I? A little nervousness on my part might've been kittenish, sexy, an excuse to shiver under his arm. Dazed horror, on the other hand, seemed just plain burdensome. We decided to reserve the tjte-`-tjte at my pad for a future time, when I might actually be in the mood for a little tjte.

But preserving my virtue had its consequences. That night, my empty home seemed a crime scene waiting to happen. Whatever evil had destroyed the kids in "Blair Witch" (a force not only fictional but milieu-specific) had somehow mutated into something that might invade my urban domicile. So I reverted to my childhood habit of peeking inside my closet doors and behind my shower curtain, and as I finally passed out on my living-room couch, with the lights on and the TV blaring, I cursed my lack of a live-in lover. Weren't such indignities as dateless weddings and involuntary periods of celibacy enough of a trial? Must my single status increase the likelihood of a grisly demise as well?

That's why, the next day, I wasn't surprised to learn that an acquaintance of mine had invited her otherwise unappealing "Blair Witch" date to spend the night. Where are the sex researchers when you need them? I would love to know what this summer's celluloid divertissements such as "The Blair Witch Project," "The Sixth Sense" and "The Haunting" have done for American bedrooms. As the wave of creepy flicks continues (with "Stir of Echoes," "Stigmata" and "The Minus Man") are lechers everywhere getting unreasonably and unseasonably lucky? Will fear replace lust on the list of top 10 reasons to go to bed accompanied? After all, it's not so surprising that terror would serve as an aphrodisiac. My friend Tom (whose girlfriend ridicules him for refusing to take her to her beloved horror films) believes that when couples see scary movies together, their physiological arousal -- thumping heart, quicker breathing, adrenaline rush -- can easily be mistaken for a heightened appreciation of the other's alluring traits. The subsequent biological imperative? Fight, flight or spend the night.

Moreover, the trauma of seeing something horrific might well function as a bonding experience for people who survive it together, suggests Joanne Cantor, Ph.D. She's a psychologist, professor of communication arts at University of Wisconsin-Madison and author of "Mommy, I'm Scared: How TV and Movies Frighten Children and What We Can Do to Protect Them" (Harcourt Brace, 1998). Unfortunately, the benefits of thrill-seeking don't always outweigh the drawbacks. Cantor has spoken to many adults who have suffered, either as children or grownups, serious freak-outs from scary movies and TV shows. So if my irrational post-"Blair" reaction -- which included an impromptu overnight visit to my parents' house followed by a second night of lights-and-TV back home -- seemed puerile or pathetic, at least it wasn't uncommon.

"I see 50-year-old women who say, 'I have this thing ever since "Psycho" about showering [alone in the house],'" Cantor says. "They know Norman Bates isn't there, but the emotion of fear is so basic that it continues on through life." She adds, "There's a lot of continuity between children and adults in viewing scary movies." I guess the difference is that traumatized kiddies typically bring teddy bears to bed instead of guys on the make. "Adults don't want to admit [their fear] because people think they're nuts," says Cantor.

Tony, a friend of a friend, is a case in point: A single 35-year-old who doesn't want anyone to know that he has trouble sleeping after seeing "really cheesy" vampire and zombie movies, he says, "I hate the lurid images in the cheesier ones. That really stupid movie "From Dusk Till Dawn" disturbed me. So did "The Evil Dead." I hate all the blood and gore. I'm a doctor, and I'm fine if I see blood in a controlled situation -- but not in a totally chaotic situation, when there's no good reason for it." (Interestingly, more sophisticated flicks about the undead, such as Abel Ferrara's "The Addiction," don't upset him as much. This suggests that perhaps his psyche is a snob.) Tony thinks his avoidance of these movies is less than masculine, but I think it's healthier than his erstwhile, "macho" response to his fright, i.e., sleeping with a knife under his pillow.

That would not, he concedes, go over well with the ladies.

But neither would a sniveling admission of fright. If it's as hard for men to own up to being scared by a horror film as it is to let themselves cry at a tearjerker, women are at least partially to blame. We do not respond well to men who exhibit such ostensible weakness, notes Stuart Fischoff, Ph.D., professor of media psychology at California State University-Los Angeles. Indeed, he asserts, when heterosexual couples attend scary movies, "They're there in part to role-play the gender stereotypes. It gives women the license to scream and seek comfort, and men to be strong." In studying fear responses to scary movies, Fischoff has found that gender discrepancies are far more pronounced when the subjects are on dates. When people attend these movies with same-sex friends, he says, women scream less and men allow themselves to manifest their fear a bit more (although usually not by shrieking, an instinct that cultural training has practically beaten out of guys).

So it's no wonder that some men would rather concentrate on their girlfriends' fear than admit their own. For instance, I first saw "Seven" with my friend Gwen, an actress who routinely incurs emotional scars from scary movies but continues to see them nonetheless. Needless to say, we were both petrified by the movie and not too proud to admit it. When I saw it the second time, however, my then-boyfriend pooh-poohed the ending as "dumb" and kept pointing out how scared I'd been, and how cute it was that I'd jumped and flinched at the grotesque parts (when, truth be told, I had been a fairly sedate viewer this time around). At dinner afterwards, he actually pretended to pass out face-down in his penne alla vodka like the movie's "gluttony" murder victim. I indulged my boyfriend's foolishness: If he wanted to work out his fright by thumbing his nose at it and using me as a vehicle to express it, fine.

At the other extreme, I also recall a guy from grad school -- a real player -- who loved to seduce women by launching into indignant soliloquies about the glass ceiling. He assumed that revealing some apprehension during "The Silence of the Lambs" would earn him brownie points with his date as a sensitive quiche-eater -- but she never went out with him again. He was convinced it was because she had a double-standard about emotional honesty. (He was also certain it wasn't because he'd failed to charm her, or to convince her that his fear was genuine.)

But while male simpering might be repellent to many women, there are times when even the most he-man-loving gal would like her guy to express a modicum of disquietude. Cantor, the Wisconsin professor, recalls with horror and disbelief a blind date she had before she was married. The hapless date -- obviously unsophisticated when it came to dating strategies -- took Cantor to see "The Collector," a 1965 tale about an insane creep (Terence Stamp) who graduates from collecting butterflies to abducting his love interest and stashing her in his basement before eventually killing her. The movie horrified Cantor: "I never wanted to see a man for the rest of my life!" Meanwhile, her date loved the film. "It was obvious," Cantor laughs, "that we weren't meant to be."

Cal State-L.A.'s Fischoff, who felt "physiologically ravaged" for three days after seeing the original "Diabolique," doesn't think there's anything "childish" in adults' fear reactions either. "When a film obliterates our defense mechanisms, the child reemerges. What's reemerging is in the DNA of the human species. So we keep the lights on because we don't know what might happen in the dark. We take our clothing off our chairs at night because we don't want them to come alive. And yes, it's good to have someone in bed with you, to help you remember reality."

Jennifer Kornreich is a freelance features reporter, a sex-and-relationships advice columnist for MSNBC Interactive News and a dating columnist for Cosmopolitan.