The legendary defense attorney Alan Dershowitz talks about the justice of revenge, the success of genocide and his new ethical thriller. 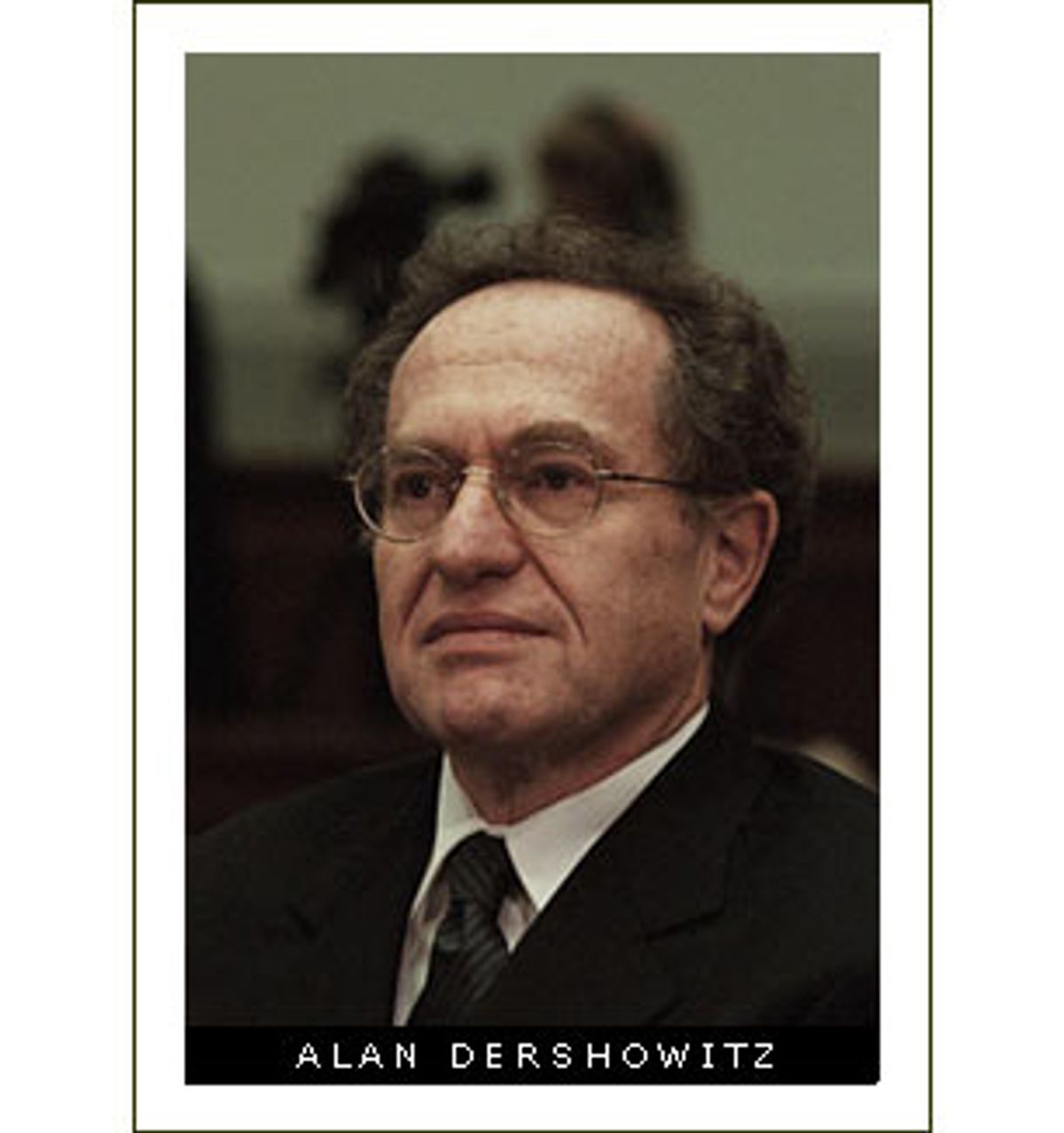 But Alan Dershowitz works in, and writes about, a realm with which Franz Kafka was all too familiar.

Not that Kafka would have been comfortable in Dershowitz's milieu -- the American legal system, where the 60-year-old Brooklyn native is a celebrated defense attorney, Harvard Law professor and author of 13 books including two novels, "The Advocate's Devil" and the newly released "Just Revenge." But then, Dershowitz isn't comfortable either. And that's the point: Both writers struggle with a bewildering and dehumanizing reality in which justice may be achieved only by a "deliberate leap in the opposite direction," in Kafka's words, or in Dershowitz's, by accepting "the cognitive dissonance" of defending the guilty for the sake of a higher principle.

For example, there's the double murderer on death row whose case Dershowitz is handling right now. "Do I think the world will be a better place if he's free from prison? Well, the world would be a better place if we didn't have the death penalty. So I have to move the level of abstraction from a particular case up to a more general principle.

"People wonder about [why I defended] O.J. Simpson," he adds. "They forget that the day I was called and asked to join the case, he was facing the death penalty."

You might say that Dershowitz, defender of such notorious clients as Simpson, Claus von Bulow, Mike Tyson and Michael Milken, is almost obsessed with such "cognitive dissonance," a rarely discussed or understood requisite for practicing law -- at least defense law. And in his novels, he structures his plot and characters in such a way that the reader cannot fail to see the dilemma.

The case in "Just Revenge" involves an old man, Max Menuchen, a Lithuanian Holocaust survivor who discovers that the man who murdered his entire family, along with the rest of the Jewish population of Vilna, is living outside of Boston only a few miles from Max. The mass murderer, Marcellus Prandus, had never been charged with a crime; he had emigrated to America, married and fathered two sons, and is now a grandfather, a model citizen and a family man.

Prandus, an old man himself, has cancer, and would be dead long before the U.S. government could gather enough evidence to deport him. So Max, who survived the massacre by clawing his way out of a mass grave where he was buried under the corpses of his relatives and neighbors, takes the law into his own hands. He exacts a terrible retribution, for which he is arrested and tried for murder.

At trial, he is defended by an old friend, Abe Ringel -- also the protagonist of "The Advocate's Devil" -- a man who bears a strong biographical and philosophical resemblance to Alan Dershowitz.

"Clearly, Max did it," Dershowitz says. "He caused the death of this man, and did it willingly and knowingly.

"At the beginning of 'Just Revenge' I have a dialogue in which Emma [Abe's daughter] persuades Abe to stop representing guilty people -- only innocent people. And along comes Max! And Max is guilty!" Dershowitz is smiling, clearly delighted by the intractable problem. "And Emma pleads with him, 'You gotta represent Max.' And Abe says, 'Aha! See?'

"My job," he continues, underscoring the point, "is to represent anybody. Sometimes they're innocent, sometimes it's a thug who's guilty. Right now I'm working to save the lives of 13 Iranian Jews who were falsely accused of spying, and I've been spending a lot of time on that. When I define my life that way, there's no conflict between the case and what my philosophy is.

"But a few years ago, I represented a woman who killed her husband. Six shots, and then she reloaded the gun and shot him again -- 12 shots -- and she was claiming it was self-defense. And I took that case, and I lost. But while I was trying that case, women all over the country wrote to me. They loved me. Even though, legally, how do you explain reloading that gun?

"So I have to remove myself from the day-to-day of one particular case. That's hard to do psychologically, and I tried to show in 'Advocate's Devil' [about an attorney who successfully defends a guilty rapist] how hard it is. It's a little easier in this book, because Max is such a nice man, and even though what he did might be terrible, he's a friend of the family ..." Dershowitz pauses, reflects for a moment. "The theme of this book is really revenge or retribution, when the legal system doesn't work.

"The idea that we allowed Nazi war criminals to come to this country and help us build our space program is abominable. I mean Werner Von Braun belonged in jail, not [venerated] as a hero. The victors -- England, France, others -- who didn't seek any kind of justice were just looking at tomorrow, not worrying about yesterday. The problem is that by doing that they created Pol Pot, they created Milosevic, and they created others who have promiscuously engaged in continued genocide, because they realize genocidal killers get away with it. That's the message of the 20th century: Genocide works. Genocidal killers get away with it."

"I remember reading in college, in Dostoevski's 'The Brothers Karamazov,' that one of the characters asks, 'If by torturing and killing a child we could produce total happiness for the world, would it be just?' He just throws the question out; he doesn't give an answer. And it stuck with me for a long, long time, and in [the novel] I try to give an answer, but there's no perfect answer."

In 1962, when he was a law student, Dershowitz was asked to go to Israel with Telford Taylor, the chief U.S. prosecutor at Nuremberg, and help broadcast the trial of Adolf Eichmann. He didn't do it. "I had a clerkship coming up, I was worried about my own career, and I didn't go.

"Sometimes I think I should have done [it]. There was a chance in the '60s to really get those sons of bitches, but they got away with it, and they died happily in the arms of their families. And since I don't believe in the hereafter, that's it. They'll never have to pay a price for it. That's one reason I had to write this book. I had this feeling of wanting a just revenge. I had to get it in fiction at least."

Still, Dershowitz finds fiction hard to write, and "Just Revenge" was especially so. "I first thought about writing it about 20 years ago, when I discovered how many of my family were killed during the Holocaust. But I didn't think I had the talent to put together a novel on the Holocaust. It's daunting.

Kafka would probably have approved. He once wrote, "I think we ought to read only the kind of books that wound and stab us ... We need the books that affect us like a disaster, that grieve us deeply, like the death of someone we loved more than ourselves ... A book must be the axe for the frozen sea within us."

Dershowitz uses different words, but he's saying almost the same thing. "When I teach ethics [at Harvard], I teach 15 problems, what I call the intractable problems." He outlines one, which happens to be one of the subplots in "The Advocate's Devil": What if a man is convicted of murder and sentenced to death, and another man comes into a lawyer's office and confesses to the crime. Should the lawyer break his oath of attorney-client privilege and turn in the guilty client?

"I once taught this in a class and there was actually a shoving match, the students were so angry with each other over their views. Then I knew I had a good one. Because there's no right answer to that."

Nan Goldberg's fiction, book reviews, and author profiles regularly appear in the New York Post, the Newark Star-Ledger and other newspapers and magazines.