Welcome to the Mile-High Club

Our flying correspondent relates some true tales of sex in the skies. 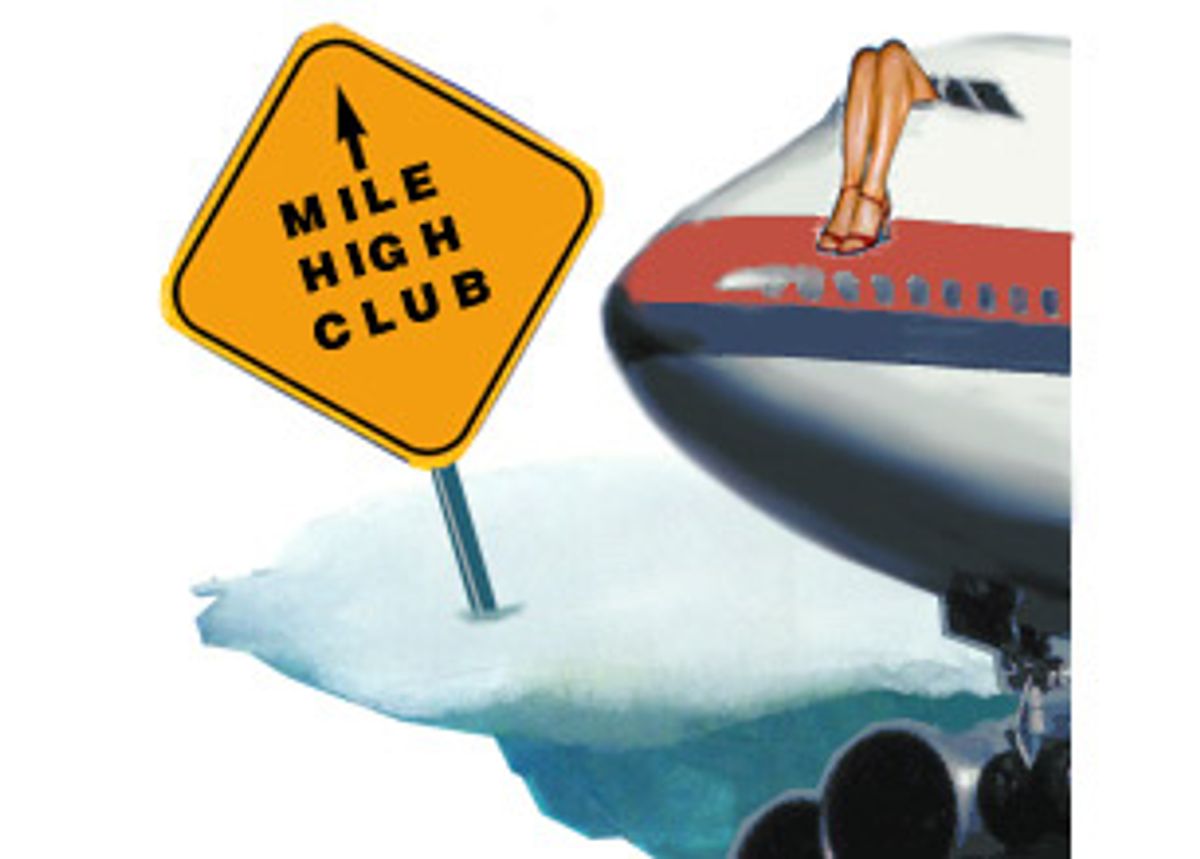 Ensconced in a row by themselves, they thrashed together unrelentingly, oblivious to the sidelong glances of my colleagues, who kept cruising the aisle to get a closer look. The cabin was dark save for a few passenger reading lamps that back-lit the performance like tiny, misguided spotlights. With so few passengers, most people were stretched across several seats and sleeping soundly, unaware of the escalating passion that seemed destined to redefine the concept of a "satisfying" flight.

In a daunting display of dexterity, the woman suddenly threw one leg across her boyfriend's lap, straddling him with such enthusiasm that her skirt canopied like a quick-open parachute. As the couple continued, they made a mystifying attempt at camouflage by draping a blanket over their heads. The blanket could not, however, disguise the woman's sudden, mischievous movements -- she began a slow grind in her boyfriend's crotch, accelerated to an equestrian gallop and in less than two minutes was jouncing up and down at warp speed.

Peering at the action from behind the aft bulkhead, just a few feet away, I could hear muffled moaning and the barely audible thwack-thwack-thwack of colliding flesh. When our female flyer arrived at her final destination, she let loose a shriek that echoed through the cabin. She then collapsed into her boyfriend's arms just as startled passengers sprang upright in their seats.

Welcome to the Mile-High Club.

Mile-High Club liaisons are most common late at night, when lights are low, crowds are minimal and the threat of discovery is less likely. The overtly courageous -- or woefully tacky -- seek membership in the comfort of their seat, cloaked by blankets and pillows and prodigious amounts of nerve. (Rumors of two-minute galley "quickies" are rife throughout the airline industry, but I've never walked in on such an episode.)

Nevertheless, in keeping with a tradition that began soon after Wilbur and Orville wobbled across the skies near Kitty Hawk, most MHC wannabes are anointed in an aromatic airplane lavatory that only a contortionist could love.

On a recent flight from Osaka to Los Angeles, a flight attendant opened an unlocked lavatory door and got an eyeful. "One of my crew members saw a woman straddling a man on the toilet seat," recalls flight attendant Stephanie Mueller. "She quickly closed the door and locked it from the outside." A group of flight attendants poked their heads out of the galley to watch as the couple emerged. The man returned to his seat on the right side of the plane, and the woman took her seat on the left. "Later," says Mueller, "we noticed the woman was holding the hand of the male passenger seated next to her."

A similar tryst occurred on a flight from New York to San Juan, Puerto Rico. Flight attendant Santiago Guerra was tending to first-class passengers when a well-known sportscaster seduced a woman right in front of her boyfriend.

"After he finished his meal, the boyfriend went into the first-class lavatory," says Guerra. The woman -- who was visibly inebriated and undeniably star-struck -- "exchanged a look with the sportscaster. They walked to the back of the plane and entered an aft lavatory together." Some 15 minutes later, the disheveled woman returned to her seat, followed, seconds later, by the smug-faced sportscaster. The boyfriend flew into a rage. "You screwed him, didn't you ... you bitch!" he said. And to the sportscaster: "I know what you did to my girlfriend, motherfucker!"

Upon arrival in San Juan, the boyfriend bolted and so did the sportscaster, leaving the woman alone and in tears.

Lately, the airline industry has been besieged by more sinister manifestations of passenger rebellion: physical assaults against pilots and flight attendants, the destruction of aircraft interiors, urinating and defecating in the aisles. (Yes, this actually happens.) While these hostile acts seem to be growing in frequency and intensity, victimless infractions like in-flight sex often go unnoticed.

But at a 1997 airline cabin-safety symposium, a Singapore Airlines official expressed great concern. "The increasing number of sexual offenses," he said, is a "particularly worrying trend."

Newspaper reports suggest that at one point, a whopping one-third of Singapore Airlines' passenger misconduct cases involved sexual transgressions. Two years ago, a South African Airways captain threatened to divert his jumbo jet due to an onboard orgy that was gathering momentum. In a two-year period at London's Heathrow Airport, 15 passengers were reportedly detained by police because of in-flight sexual misconduct. In the United States, where industry disclosure about sexual activity is as likely as a lobster meal in coach, only one major airline has offered public comments about the problem. "Although no one is getting hurt," says United Airlines spokeswoman Kristina Dickson, "this type of activity is not to be tolerated." United recognizes that onboard sex is a growing problem throughout the airline industry. "We treat it like any other form of passenger misconduct."

Though the FBI responds to reports of terrorism, in-flight assault and "interference with a flight crew," local authorities are responsible for handling complaints about lewd and lascivious behavior -- a misdemeanor, punishable by up to one year in prison in many states. (If a child under 16 witnesses the act, the crime could be upgraded to a felony.) Unwilling to subject themselves to embarrassing publicity, most airlines are reluctant to pursue even the most outrageous cases.

Last year, aboard a South African Airways flight bound to London from Johannesburg, a business-class couple reportedly disrobed from the waist down and began having sex in full view of other passengers. Mortified onlookers summoned flight attendants who, despite their best efforts, could not get the couple to disengage. The high-flying exhibitionists finally geared down, but only after the captain yelled, "This is not a shag house!"

But why are people so eager to have sex on an airplane these days? Christina Lawrence, a practicing psychologist who spent 30 years as a flight attendant for United Airlines, cites disinhibitors (drugs and alcohol), airplane density (people think they can get away with bad behavior on a plane full of strangers) and a relaxed dress code as possible reasons for mile-high mania.

"Years ago, airline passengers were more inhibited because of formal dress standards," she says. "There's a certain behavior that goes along with conservative attire." Nowadays, it's not unusual for passengers to walk around the cabin in miniskirts, shorts, see-through blouses, sweat suits, tank tops, flip-flops or no shoes at all.

I once saw a passenger traipsing around the aircraft dressed only in a slip. When the light hit just right, you could see -- well, let's just say she left nothing to the imagination.

Mix audacious clothing with unlimited alcohol, darkness, a long flight and smatterings of bored, sexually depraved or overstimulated human beings -- and there's bound to be lechery in the aisles.

During a flight from Auckland, New Zealand, to Los Angeles, flight attendant Carolyn Peters noticed "a man leaning back in his seat, eyes closed, with such a look of ecstasy on his face." The blanket across his lap was "moving up and down," she said. "Soon, the blanket fell off, revealing a woman actually giving the guy a blow job."

At this point, one of the flight attendants tapped the man on the shoulder and said, "This type of behavior is not appropriate in business class." To the crew's amazement, "The lady giving the blow job was so into what she was doing, she didn't even notice." She continued her stellar performance until the recipient forced her to stop. They both stared at the flight attendant, who repeated her warning. Then the woman asked, "Can we take a seat in coach?"

Crew members are no less immune to high-altitude sins of the flesh. The problem is, when we get busted, our flying career may suddenly crash and burn. That's exactly what happened to a pilot at one airline.

While taking a scheduled break from his duties in the cockpit, the pilot retreated to his designated first-class rest seat and, according to sources, started "smooching" with his flight attendant girlfriend. The couple then disappeared into a lavatory for "quite some time." Reports were filed, management reacted and the pilot lost his job.

Despite the threat of dismissal -- or in the case of brazen passengers, the threat of embarrassment or worse, a one-year layover in the slammer -- sexual impropriety aboard airplanes may soon reach new and more astonishing lows.

In 1996, British Airways introduced a first-class seat that reclines 180 degrees -- effectively becoming a 6-foot-6-inch bed. Singapore Airlines, Qantas, Lufthansa, American, U.S. Airways, Japan Airlines and others have followed suit by implementing sky-beds of their own. While British Airways calls them "flying cradles," United refers to the cushy thrones as "first suites" and Singapore Airlines has adopted the magnanimous appellation "skysuites." The industry moniker is "sleeper-seat," but no matter what you call these airborne mattresses, they're a frisky flyer's dream come true.

The most coveted sleeper-seats are single units that slant toward the window on each side of the plane. This module's high back wraps almost completely around the passenger, creating an atmosphere of unprecedented privacy. Airline companies, in their single-minded quest to pamper first-class customers, have no idea what kind of plebeian possibilities they've unleashed.

But Richard Branson knows. He's even upped the sky-bed ante. By late 2000, passengers on Virgin Atlantic flights will be able to book a seat that converts into a double bed. That's right. For around $5,500 round trip, New York-London passengers can stretch out, roll around, even join the Mile-High Club -- all this behind the ramparts of a retractable "privacy screen."

As a courtesy to passengers and crew, I hope the privacy screens are soundproof.