Who needs the NEA, anyway? 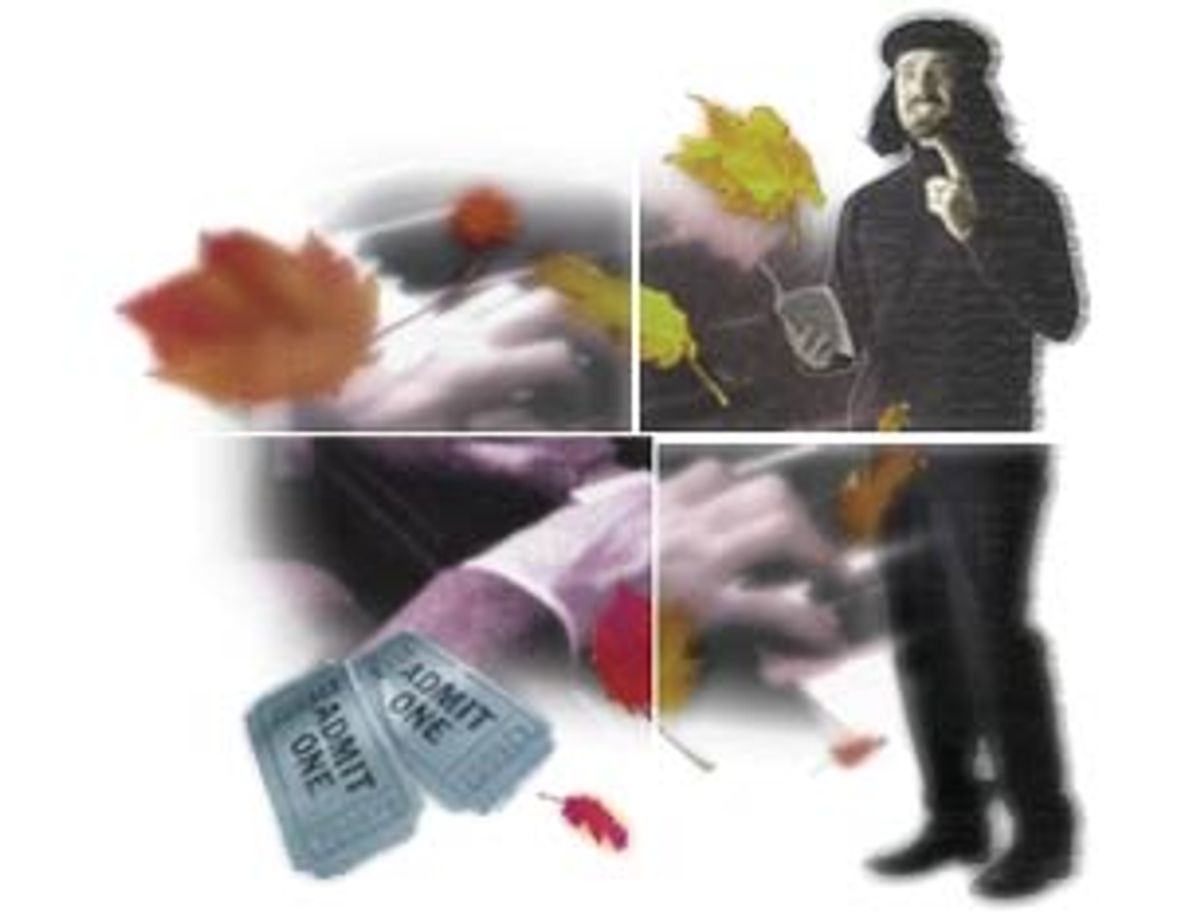 Art, as you know, is about the search for truth. And in that spirit, we at Your Town Here Arts and Lectures send you this brochure about our upcoming season.

Usually, at this point in the brochure, we'd say something like, "Consider us your ticket to fun!" But not this year. This year, we're feeling honest. Honest and low-key. I mean, if you consider us your ticket to fun, great, but we don't want to be pushy. We've been up really late typing this brochure and to be perfectly frank, we're questioning the whole enterprise -- but, hey, don't let that stop you. It goes without saying that some of the following performances were scheduled simply because we're halfway between the ocean and Minneapolis. We're just gas money to the artists and they're just calendar filler to us.

Parking's kind of a problem, too, not that we'd ever say that out loud. We advise you to get to know your way around this neighborhood, because it gets really dark around here, and all the buildings look pretty much alike and none of them have signs so you're going to waste like 19 and a half minutes just trying to locate the building. So you'll be late. Once you get inside the theater, the snotty college kid ushers who are only getting work-study pay are going to try to prevent you from entering the auditorium right away. And who could blame them, really, since they only work for maybe 45 minutes and when you work for 45 minutes and make $4 an hour, well, it's hardly even worth it unless they entertain themselves by keeping you latecomers in the lobby till intermission out of -- and they're going to mostly crack up when they say this -- out of "respect for the artist."

So, anyway, dear subscriber, you are a welcome and important part of our present and a vital participant in our future. I mean, our funding situation's pretty grim really, though don't tell that to those adorable Cuban performance artists who are planning to defect when they present their multimedia event in May titled "Cuando va a morir seqor Castro?" ("When Is Castro Going to Die Already"), because they really have their hopes up and we just feel for them, you know? So remember, when you subscribe to our program, you're not just getting a bunch of hastily assembled, weird Flamenco dance-type questionable programming choices, you're bringing oppressed people to the free world! We hope!

Let's face it. All of us in the arts biz know you've heard world music. You've gone to monologues. Interpretive dance. You've done homespun, dissonant, rhythmic and funny-because-it's-true. You are a jaded, indifferent public and frankly, we don't blame you. Inspired by performers Penn and Teller, who call themselves "magicians for people who hate magic," we have thus scheduled an entire season of arts programming nobody likes. Join us Sept. 4 for Paraguayan folkloric ballet for people who hate Paraguayan folkloric ballet; Feb. 8 for medieval chant and polyphony for people who would rather be sitting at home listening to their old Bon Jovi records; and, on May 18, if the very mention of Anglo-Saxon-American jazz puppet theater makes you want to slit your wrists -- are you in for a treat!

The jewel in the crown of this program of witty, prickly dead guys channeled from beyond the grave by gentlemen actors is of course Hal Holbrook's tried-and-true "Mark Twain Tonight!" on Oct. 10. Join us later in the year as TV's Mr. Belvedere offers "Tea Time! With Oscar Wilde." Also not to be missed: Jean Paul Belmondo's international smash hit one-man, one-bed show, "Marcel Proust Ce Soir!" and, finally, "Hangin' with Homer," in which the ancient Greek poet is made flesh by the one, the only, the odyssey himself: Wilford Brimley, whom the Detroit Free Press has called "so Homeric it's scary."

The Babes of Classical Music

We at Your Town Here are nothing if not observant. And is it just us, or have the ladies of classical music gotten lovelier? I mean, it couldn't have happened at a better time. Here the art form's dying this slow dirge of a death and its audience right along with it, going, going, gone and this new crop of cellists and sopranos and what-not just gets foxier and foxier! What a lifesaver, right? Thus we are pleased to present a series called "The Babes of Classical Music." Subtitled "Hubba Hubba Haydn," this series proves that virtuosic technique and killer legs are not mutually exclusive. Join us for week after week of this marriage made in heaven: The sonata-allegro form and spaghetti straps! High heels and Holst! And, if you subscribe to the Bach Bombshells' concert, please join us afterwards for the group's aprhs concert lecture and discussion called "Bared Midriffs and Exposing the Process: A Pedagogical Peep Show."

Philip Glass Does Not Age: A Slide Show

We thought about booking composer Philip Glass this year; or the Philip Glass Ensemble; or a Philip Glass opera; or some Philip Glass/Robert Wilson collaboration. But then we thought, everybody books Philip Glass. The reason we know that everybody books Philip Glass is that we have seen Philip Glass' publicity photograph in promotional materials since before we were born and we have noticed that Philip. Glass. Does not. Age. See for yourself. At 22, he looked 35. At 74, he'll still look 35. On the evening of Philip Glass' birthday, which we haven't bothered yet to look up, our representative, who has access not only to our files but to the messy stacks of brochures and stuff on top of our files, will present an exposi in the form of a slide show. Watch 30 years of eerily similar photos flip by. Perhaps you will enjoy our representative's favorite pic: that one where he's touching his forehead with his fingers so it looks like that little Dutch boy holding back the dike, you know, the idea being that his head is just flooding with all these ideas and he has to stop up his head with his fingers just to keep the ideas from seeping out and drowning us all with his brilliance! You will be shocked! You will be amazed! And by the end of the evening you will be convinced that Philip. Glass. Does not. Age.

Become a member of Your Town Here Arts and Lectures and support our sagging endowment. Between you and me, that one woman, the one who was really good at the fund-raising, left to have twins and never came back and even though the main donor's nephew is a real sweetheart of a guy he just can't squeeze a dime out of anyone. We can barely afford light bulbs anymore, much less fancy cheese trays for that whiny clarinet prodigy who shall remain Ronald Saltzman. Sometimes I wish he'd just strangle himself on his festive, multicolored Guatemalan necktie, which I bet he thinks makes him look all "fun" and "laid back" but just really makes him look like what he is, which is a goon who can't dress himself. (Boy, can he suck down the cheese trays backstage!) And I just stand there knowing that with every bite of gouda he shovels down, that's just one less box of staples we'll be able to afford. (Sorry this brochure is a bunch of loose papers. Blame Ronald, not me.) So to make a long story short, the generosity of individual subscribers like you is the only thing keeping me from taking that job with the Moose Jaw Art Center, if you know what I mean. Because Saskatchewan is like the Kansas of Canada.