An author comes up with a new (and brilliant) twist for the detective novel: A narrator with Tourette's syndrome. 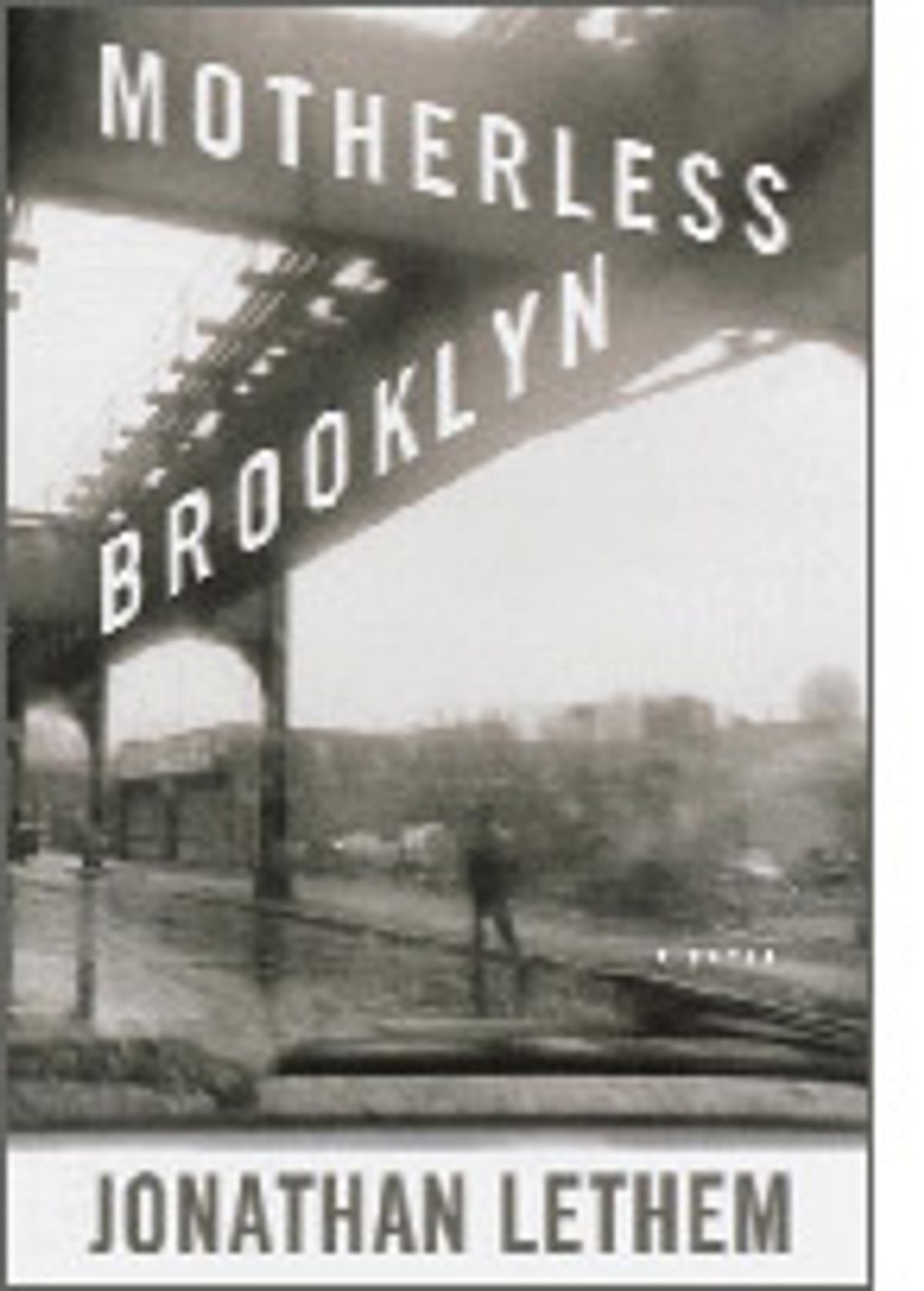 A detective with Tourette's syndrome narrates a hard-boiled crime novel. Sounds like a gimmick, right? Another in the endless line of diversity dicks -- sleuths in wheelchairs, lesbian lieutenants, investigators who also happen to be heroin addicts or restaurant critics or codgers as old as Angela Lansbury. But Lionel Essrog, the twitching, barking, gabbling narrator of Jonathan Lethem's new novel, "Motherless Brooklyn," is no movie-of-the-week novelty grafted onto a noir mystery. Maybe his Tourette's is a gimmick, but it's a gimmick with depth, with soul. Lethem, after all, walks the serious-fiction beat, and in his hands the compulsions of Tourette's become a kind of kaleidoscopic metaphor, ultimately (and somewhat paradoxically) reflecting the fundamental ethos of the mystery genre itself: the compulsion to restore order and rightness to a world thrown temporarily out of joint.

The world of "Motherless Brooklyn" is, of course, the borough of the title, and what disrupts its sense of order is the stabbing death of a small-time neighborhood operator named Frank Minna. Lionel is Frank's factotum, one of four misfits from a local orphanage Frank has commandeered to work in his seedy and makeshift detective agency. Calling themselves Minna Men, the four have become vassals in Frank's scruffy little fiefdom, and like the members of any feudal hierarchy, each has found his particular niche: Tony is the implicit second-in-command, the lesser noble to Frank's lord of the manor; Danny is the enigmatic knight-errant, distant and of uncertain loyalty; Gilbert is the earthy, none too intelligent serf; and Lionel, nicknamed Freakshow because of his constant verbal tics and physical twitches, is the fool, the court jester, whose antics the others tolerate with the indulgence that forced proximity dictates.

With Frank's murder, this miniature fiefdom loses its suzerain, and in the scramble to find the killer, long-submerged tensions begin to pull the Minna Men apart. (Think Yugoslavia after Tito, or the Bowery Boys without Leo Gorcey to keep them all in line.) As Frank's deputy, Tony tries to control the investigation, but Lionel has his own reasons -- some of them Tourette's-related -- for getting to the bottom of Frank's murder: "My words begin plucking at the threads nervously, seeking purchase, a weak point ..." In a sense, this is detective work as medical condition, stemming from a pathological need to poke at experience, to process its patterns, "putting hairs in place, putting ducks in rows, replacing divots."

What follows is a fairly standard noir quest: a long, convoluted road to discovery, littered with the usual detritus of fractured conspiracies, and complete with corpses, cutthroats and big, ugly men with big, ugly guns. But as in his earlier novels ("As She Climbed Across the Table," "Girl in Landscape"), Lethem harnesses the engine of a familiar genre to transport us to a territory uniquely his own. It comes as no surprise that he uses Tourette's as an excuse for some heady verbal pyrotechnics. (My favorite Essrog riff: "He's just a big mouse, Daddy, a vigorous louse, big as a house, a couch, a man, a plan, a canal, apocalypse.") More unexpected is the sympathetic warmth he brings to the characterization of Lionel. "Motherless Brooklyn" has a few problems -- including some cartoonlike stock characters and one scene near the end that flirts with maudlin sentimentality -- but it works far better than the average hip postmodern novel in terms of sheer emotional impact. Because Lethem never lets the metaphorical and linguistic possibilities of his narrator's illness overshadow his immensely appealing humanity, we really care about Lionel and his search for his mentor's killer.

In the end, the mystery at the heart of "Motherless Brooklyn" turns out to be surprisingly modest. Readers looking for one of Don DeLillo's or Thomas Pynchon's grand metaphysical conspiracies may be disappointed. But really, Lethem is too inventive a writer to produce just another literature-of-paranoia knockoff, with Tourette's as its central trope ("The Barking of Lot 49"?). Instead, he's given us something that is at once less derivative and more traditional: a detective story that transcends its pulp roots not by adopting high-art pretensions but by bringing to the genre an originality and an idiosyncratic sympathy that few other writers could muster.

Gary Krist is the author of the novels "Bad Chemistry" and "Chaos Theory."