A terrible thing to waste

You do not need brains to go to the Harvard Brain Bank, only a brain. 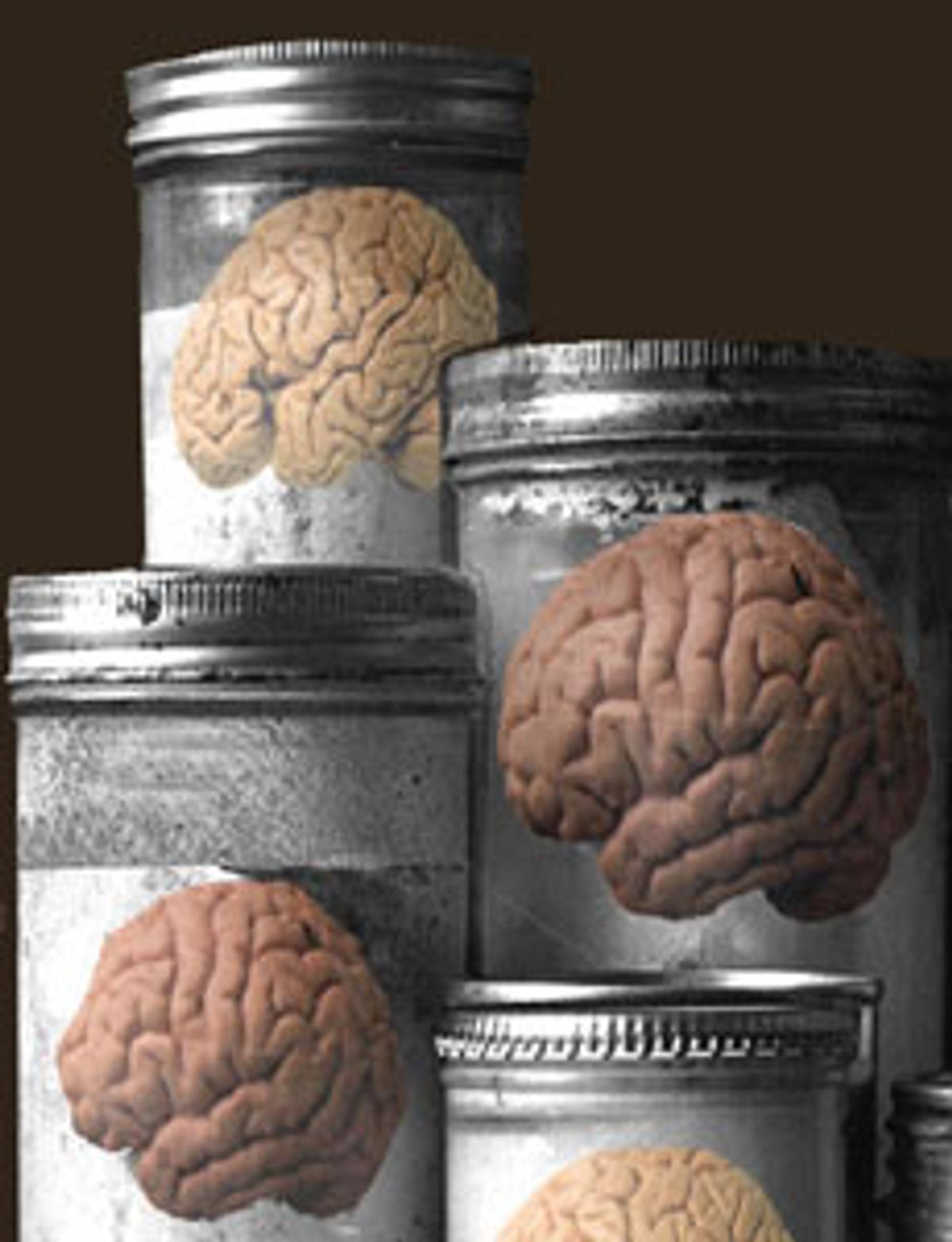 There are many good reasons to become a brain donor. One of the best is to advance the study of mental dysfunction.

You see, researchers cannot study animal brains to learn about mental illness, because animals don't get mentally ill. While some animals -- cats, for example, and dogs small enough to fit into bicycle baskets -- seem to incorporate mental illness as a natural personality feature, animals are not known to have diagnosable brain disorders like Alzheimer's and schizophrenia. So researchers need to study brains of mentally ill humans and, as controls, brains of normal humans like you and me (OK, you).

One fine fall day, I decided to visit my final resting place. The Brain Bank is part of Harvard's McLean Hospital, which sits on a rolling estate of handsome brick buildings just outside Boston. I was directed to the third floor of the Mailman Research Building. The woman pronounced it "Melmon," so as to avoid having to answer stupid questions about what kind of research is being done on mailmen.

If you are considering becoming a brain donor, the best thing for you to do is stay away from the Brain Bank. Within 10 minutes of arriving, I was watching a 24-year-old technician named Al slice up a piece of a 67-year-old named Fran. Fran's brain had been flash-frozen and did not slice cleanly. It sliced as does a Butterfinger, with little shards crumbling off. The shards quickly thawed and looked less Butterfinger-like. Al wiped them up with a paper towel: "There goes third grade."

Al has gotten into trouble for saying things like this. I read a newspaper story in which the reporter asked Al if he planned to donate his brain and he replied, "No way! I'm going out with whatever I came in with!" Now when you ask him, he says quietly, "I'm only 24. I really don't know."

The Brain Bank's associate director, Steven Vincent, was showing me around. Down the hall from the dissection room was the computer room. Vincent referred to it as "the brains of the operation," which in any other operation would have been fine, but in this case was a tad confusing. At the end of the hall were the real brains. It wasn't quite what I had imagined. I had pictured whole, intact brains floating in glass jars. But the brains are cut in half, one side being sliced and frozen, the other side sliced and stored in formaldehyde inside Rubbermaid and Frezette food savers. Somehow, I'd expected more of Harvard. If not glass, at least Tupperware. I wondered what the dorms look like these days.

Vincent told me there are currently 4,600 specimens in the formaldehyde room. I wrote the number down and then, seconds later, I said, "How many half-brains are in here altogether?" Vincent politely repeated 4,600, though you could tell that what he wanted to say was, "4,601." Earlier I'd asked
Fran's age after I'd just been told it. I began to worry that perhaps there wouldn't be a place for my brain at Harvard. "Of course there is," deadpanned Vincent. "See those tiny little freezers down there?"

The more I learned, the more I wasn't so sure about this. I made the mistake of reading the Nurses Procedure Sheet, which includes the line "If mortuary refrigeration is not immediately available, pack the decedent's head in wet ice ..." It was not clear from the wording whether the head was to be left attached to the remainder of the decedent, and I could imagine many a harried nurse reaching for the bone saw. On the other hand, brain donation does present the novel experience of getting to travel by Fed Ex. Plus, I was told, brains are spared the rigors of the cargo hold and often get to sit up in the cockpit with the pilot. It doesn't make up for an eternity spent in Rubbermaid, but still.

My problem now was that I was picturing myself brainless in a coffin, seeping spinal fluid onto my satin casket pillow. Vincent assured me that no one would even be able to tell that my brain was missing. He assured me in a way that assured me and at the same time didn't bring me any closer to being a committed brain donor. "First," he began, "they cut the skin like this." On his head he traced a line from one ear back around to the other. "Then they pull the skin up over the face." Here he made a motion as though taking off a (particularly effective) Halloween mask. "They use a saw to cut the top of the skull off, the brain is removed and the skull is put back and screwed in place. Put the skin flap back, and comb the hair back over." Vincent used the peppy how-to language of an infomercial host, making brain harvesting sound like something that takes just minutes and wipes clean with a damp cloth.

Vincent sensed I was slipping from his grasp. He went earnest on me, talking of how the bank got only 40 "normals" a year, and how less than 15 percent of the people he sends brochures to wind up being donors. "A lot of people think they're signed up but they're not," he said. "They ask for information but they never send the form back. They have the papers, so they think they're signed up." Clearly, I wouldn't want for company in the little-tiny-brain freezer.

Vincent inquired as to whether I was still game. I considered. "Can I have one of those Brain Bank refrigerator magnets on your file cabinet?" He handed me a stack. On his monitor sat a gray squishy Brain Bank miniature brain, one of those palm-size squeeze toys. Vincent followed my gaze. "Oh no," he said. "We have a very limited promotional budget, and those are being used to motivate the mental illness community."

"Which would of course include journalists."

Vincent tossed me a squeeze brain. I promised to keep the donor card in my wallet.

Before I left, Vincent advised me to talk to my husband, for next-of-kin have final say about brain donations. When you die, your body becomes the property of your spouse. Legally, spouses can do whatever they please with their dead mate's body.

So I talked to Ed. He had some lively and novel ideas, but brain removal wasn't on the list. Ed is a squeamish guy: "Ixnay on the ainbankbray." Unless, he added, there was a chance they could one day revive my brain and put it on someone else's body. "Provided I get to choose the body."