A couple discovers that love includes many trials -- including the unexpected task of merging, and purging, their libraries. 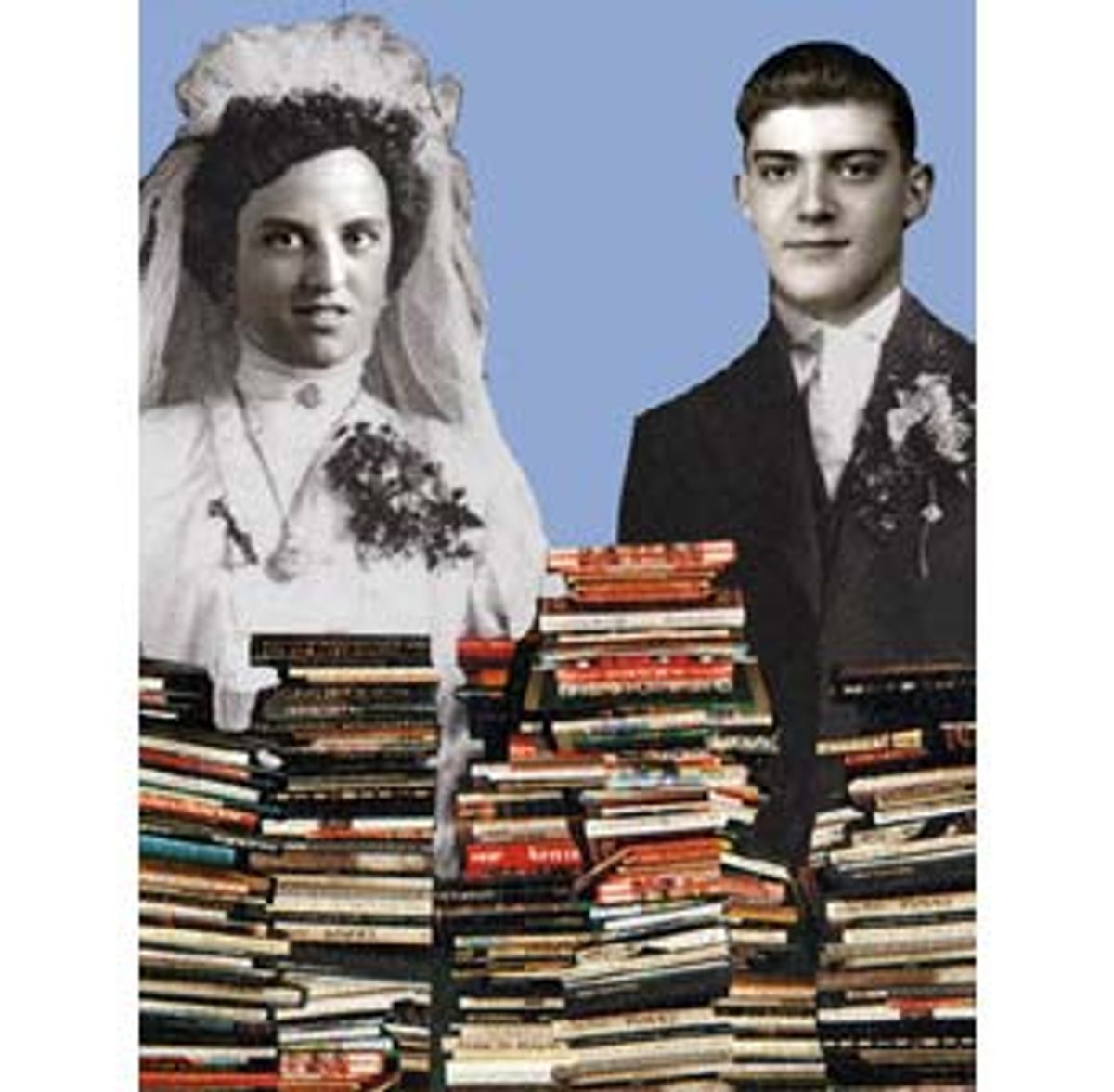 "Do we really need this?" my fianci asks, holding up a pint-size copy of Wallace Stevens' "Selected Poems."

"But we already have the 'Collected Poems' in hardback and paperback. Not to mention the New American Library edition."

"But this one's so  portable," I say, searching for a reason to keep this completely superfluous book. It's New York in July, 98 degrees, 100 percent humidity, and OK, I'm a little irrational. We have to move a ton of books to Los Angeles. Not a figurative ton, but an actual one: 1,934 pounds. Our movers have just given us an obscene cost estimate that we can neither believe nor afford. I'm starting to wish I had grown up cultivating a less bulky obsession -- the flute, maybe.

We're standing in a maze of towering and precariously arranged piles of books, removed from the built-in shelves that line all four walls of all three rooms of our Brooklyn Heights apartment. How did we end up with this gross overload? I flash back to our blind date two and a half years ago. Joan, the cupid who set it up, kindled our interest with book talk. "She loves to read," she told Matthew. "He may be the best-read person I've ever met," she told me. Eight months later we merged book collections and lives into a miraculously affordable apartment that could house us and our books. A small fourth-floor walk-up? Circa 1920? No problem. We continued to ply each other with favorite novels, thick poetry collections and glamorous never-to-be-opened gifts such as "The Architecture Pack."

Turning to the shelves, I steel myself. I come from a long line of pack rats -- "throwing away" and "sorting through" are not phrases in the Amon vocabulary. This isn't a matter of choice, I think, and I will have to be ruthless. Whole sections are going to have to go. For instance, the audiobooks: both of them. The tape of Dickens' "Martin Chuzzleworth" I bought Matthew for our first Christmas together is still shrink-wrapped (six-hour abridgement by Paul Scofield -- what was I thinking?). The other, Elizabeth Smart's "By Grand Central Station I Sat Down and Wept," is another easy call. We both loved the book's poetry and passion, and we gave the tape a go on a long drive through Napa last spring. We made it through about three minutes of the singsong lament before exploding in laughter and chucking the tape out the window. We stopped to pick it up (after backing up over it) only because we thought it would make a good joke present. Ha.

Emboldened, I turn to nonfiction. Am I really planning to read that 800-page biography of Lytton Strachey, or do I just enjoy being the kind of person who might? The problem is, I am the kind of person who might. I postpone this decision and move on to unemotional reference books. Four different dictionaries, three thesauruses, "Benet's Readers Encyclopedia": all keepers. You never know.

But what about this two-volume almanac of Polish history, weighing in at three and a half pounds? I bought it seven years ago when I was toying with the idea of writing a novel partially set in Krakow, but it's since become clear I will not be writing this particular novel anytime soon. Nor am I likely to develop a more casual interest in things Polish. It can go. I get ready to chuck it, only to be struck by its pristine, slipcovered beauty. "Definitive," raves one reviewer. Thumbing its thick, cream-colored pages, I can only suppose that it is. And am I really willing to forfeit my claims on the as-yet-unwritten Great Polish-American Novel?

Stealthily, I set it back in the pile of keepers and shift my sights to another teetering stack, topped by Matthew's old copy of "Iron John." This I surreptitiously slip in with the other rejects. Good work.

Next I tackle the dog-eared paperbacks I was assigned during college. "Sisterhood Is Powerful"? I adopted this righteous feminist tract during my radical days at Dartmouth, but isn't it at odds with the fact that I'm now in Freudian psychoanalysis? If it were hardback, maybe I'd keep it, but as it is I decide no. What about my copy of "Catch-22" with hilarious juvenile annotations like "Snowden = snow = white = pure"? Won't my future children get a kick out of these glimpses into my past? I consider my father's basement full of schoolbooks and realize, sadly, no. The only book of his I remember fondly is his grade-school copy of "Huckleberry Finn," on which he had crossed out the last N in Finn and written K.

I start to wonder if paperback books don't reproduce spontaneously in their own dark corners. Two copies of Graham Swift's "Waterland," two copies of John Berger's "G" -- explainable. But how did Matthew and I, two publishing types, end up with three copies of Tom Peters' "In Search of Excellence"? And why are there five copies of "Mrs. Dalloway"? A thin volume of Updike poetry turns up stuck between Philip Roth and E. Annie Proulx. Where did this come from? I vow to look into it.

Soon I have two canvas sacks full of miscellaneous paperbacks. I feel liberated. Powerful. I heft the unwanted and redundant down to the local secondhand bookstore. They're only giving a dollar a book, but like a reluctant dog owner at the pound, I just want to see these babies end up in good hands. When even the bookstore won't take some of our rejects, I pile the rest on our stoop, where in keeping with the miracle that is New York scavenging, they disappear quickly, carried noiselessly away along with my pile of old tennis shoes, stray pot lids and broken-zippered luggage.

Upstairs, Matthew is considering our ongoing Chekhov dilemma. I'm an enthusiast -- no, a fanatic -- and we own two shelves' worth of stories, plays, biographies, notebooks and miscellaneous arcana, including the gorgeous but poorly organized Ecco Press edition of the stories, in 14 different-colored volumes. Surely this is excessive, especially in light of the shorter collection we recently bought, expertly curated by Richard Ford, which contains most of my favorites in superior translations. "The Ecco set should go," Matthew says.

Mournfully, I start to reach for them -- but their radiant spines induce a nearly hypnotic pleasure. I grab mint-green Volume Three in one hand, creamy mango Five in the other. I remember the summer I spent tracking these down, volume by volume, in San Francisco. I had no money and no job, but the absence of the elusive Volume Eight ("ecru") triggered a paranoia (I hope they don't notice, I thought, studying the faces of my guests) that evolved quickly into a full-blown Hitchcockian dementia. I completed the set at last after chasing a bus down Mission Street and making it to City Lights Books just before midnight on a Friday. I'd been home alone, watching TV and obsessing, when I was struck by a premonition that it was there.

And there was the fabled addendum volume to the series, with its blood-red cover and a glowing testimonial from Raymond Carver on the back: "The Unknown Chekhov." To this day, it remains so, to me at least. I have no plans to read it, but part with it? Never.

As the sun begins to set we start panicking. Now I'm rifling through piles in a haphazard search for overlooked galleys, unused cookbooks, anything that brings pause. William Styron's "Sophie's Choice" stares up at me and I shamefully think -- I know! I know! How can I choose? I love the gentle burgundies of the Everyman Library collection, and I need to see the dusty copy of Anne Beattie's "Park City" sitting on my bedside table. I collapse on the couch, defeated.

Lindsay Amon is a freelance writer who has written for the New York Post and Gourmet.