In which the current presidential candidates are matched to ancient Roman emperors with eerie accuracy. But where are their clothes? 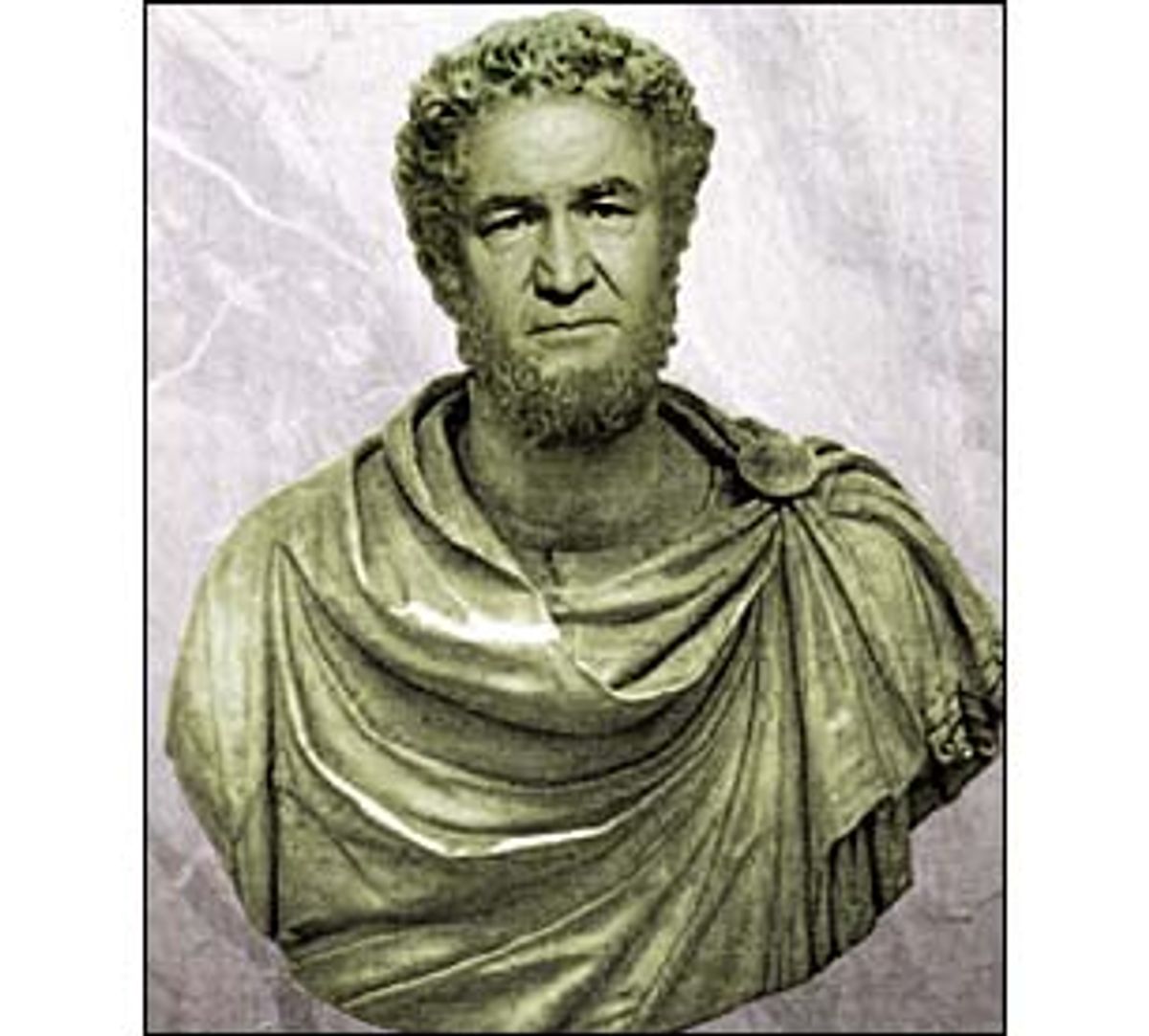 According to Pat Buchanan, "George W. Bush is no Marcus Aurelius." Then, which Roman emperor is the Republican heir? Five centuries of Caesars and their perpetual assassinations offer us some 80 emperors to use as presidential similes. Let's see who fits whom?

All of the candidates want to be Constantine, the first Christian emperor. The 4th century tyrant actually would be an appropriate choice. Constantine (c. 312-337) embraced Christianity and tried to impose it on everyone, but he never personally practiced it. Morality and mercy would have constrained his hold on power. Yes, most of his slaughtered rivals were pagans; they also were members of his family. He was ecumenical in killing Christian relatives as well. Proclaimed in his lifetime as "the 13th apostle" and "Christ's regent on earth," the ruthless hypocrite did not bother to be baptized until he was on his death bed. Constantine is not merely a role model for modern politicians; he is their patron saint.

George W. Bush is no Constantine; otherwise, Jeb would already be dead. Nor is Bush the new Marcus Aurelius, but he could be that emperor's son: the fatuous, petulant Commodus. The princeling (c. 180-192) was more of a contrast than a successor. Marcus Aurelius was a statesman, philosopher and soldier; Commodus was a jock. The young patrician possessed no distinctions other than his father's name and a talent for carousing. Commodus' reign was only as good as his advisors and his temper, and the former rarely survived the latter. He hated to be distracted from his chief interest: professional sports. The emperor preoccupied himself with managing a gladiator school. His tantrums finally compelled some endangered advisors to organize a fitting plot. The imperial jock got a fatal headlock from a professional wrestler. If George W. Bush does not have an unnatural fear of Jesse Ventura, perhaps he should.

Al Gore might aspire to be Marcus Aurelius, but he lives the plight of Claudius. Stolid, lumbering Claudius (c. 41-54) was the stooge and the successor of Caligula. Although kinsmen, the two were incongruous. Caligula was a charming sociopath; even most of his victims liked him. Claudius was an awkward introvert; people could not decide whether he was a buffoon or a bore. Among his less prurient caprices, Caligula made his horse a senator and Claudius a consul. The horse commanded more respect. When Caligula was assassinated, the Republicans in the Roman Senate overlooked the ludicrous possibility that Claudius would succeed to the throne. The Imperial party and the Praetorian Guard really did not want him either, but there were no other male adults in the dynasty. Claudius was unavoidable and inevitable. He also was underestimated. Dull, plodding Claudius turned out to be a good emperor. Perhaps Al Gore shouldn't mind the comparison.

Steve Forbes has proved his abilities by being born rich. That achievement apparently qualifies him to be president. Forbes has the presumption and precedence of Didius Julianus, the man who bought the Roman Empire. The Praetorian Guard could overlook any vice in an emperor but stinginess. Emperor Pertinax had every virtue but generosity, so he did not survive his bodyguards. The impulsive Praetorians seized the throne but had no one to occupy it. Then the extravagantly rich Julianus (c. 193) showed up at the Praetorians' camp and proceeded to bid for their loyalty. Another patrician competed in the auction for the Empire, but Julianus outbid him. His purchased Praetorians then cowed the Senate into acclaiming him the emperor. The Praetorians' loyalty lasted two months. When an ambitious general marched on Rome, the imperial guard switched sides again. Julianus did not live to regret it. He now is remembered as a joke, which may yet be Steve Forbes' real achievement.

Bill Bradley may hope to be Marcus Aurelius, but he threatens to be Julian the Apostate. Both emperors were brilliant, profound and virtuous; however, Marcus Aurelius was also competent. Julian (c. 361-363) tried managing the Empire like a graduate course in philosophy. By the 4th century, Rome verged on collapse. Corruption and strife had completely demoralized the Empire. Constantine imagined that Christianity would be a cohesive and subservient force for the government. Instead, the Christian sects were fighting each other when they weren't persecuting everyone else. Julian intended to revive the Empire by offering a new faith. As the alternative to libertine paganism and dogmatic Christianity, Julian endorsed Neoplatonism. His approach certainly had intellectual appeal. Pagans had fun, Christians had solace but Neoplatonists had metaphysics. There weren't many converts. The Christians resented Julian, while the pagans were just bewildered. Julian still has a loyal following among history professors, and Bill Bradley can count on that constituency, too.

Jesse Ventura might seem original, but he is the reincarnation of Maximinus Thrax. The peasant who became an emperor, Maximinus (c. 235-238) possessed theatrical strength and size. He could haul a loaded wagon or fell an ox with a single blow of his fist. That remarkable power also was useful for slaughtering barbarians, and Maximinus rose through the ranks of the Roman army. The general still retained his peasant manners and, seeing no reason why an ineffectual patrician should be emperor, Maximinus usurped the throne. The new Roman Emperor did not like Rome and, during his reign, never bothered to visit his capital. He preferred fighting the Germans to contending with patrician society. For their part, the patricians loathed the vulgar usurper and constantly conspired against him. Maximinus was not shy about executions, and he attempted to purge aristocrats from the officer corps; but he was one man against the Roman establishment. A plot finally succeeded, ending the reign of a brutal tyrant and the best emperor in a 50-year period. Jesse Ventura could do worse.

Pat Buchanan, unlike the other candidates, would hate to be Marcus Aurelius. The pugnacious pundit is no stoic. Furthermore, Buchanan would rather fight for the German barbarians than against them. We must find another emperor who matches Buchanan's physique, manner and philosophy. Think of a porcine sadist, a flamboyant bigot and a preposterous megalomaniac. Of course! If only Pat Buchanan were 30 years younger, he would be a perfect Nero.