Three new dramas look on the bright side of life in Splitsville. 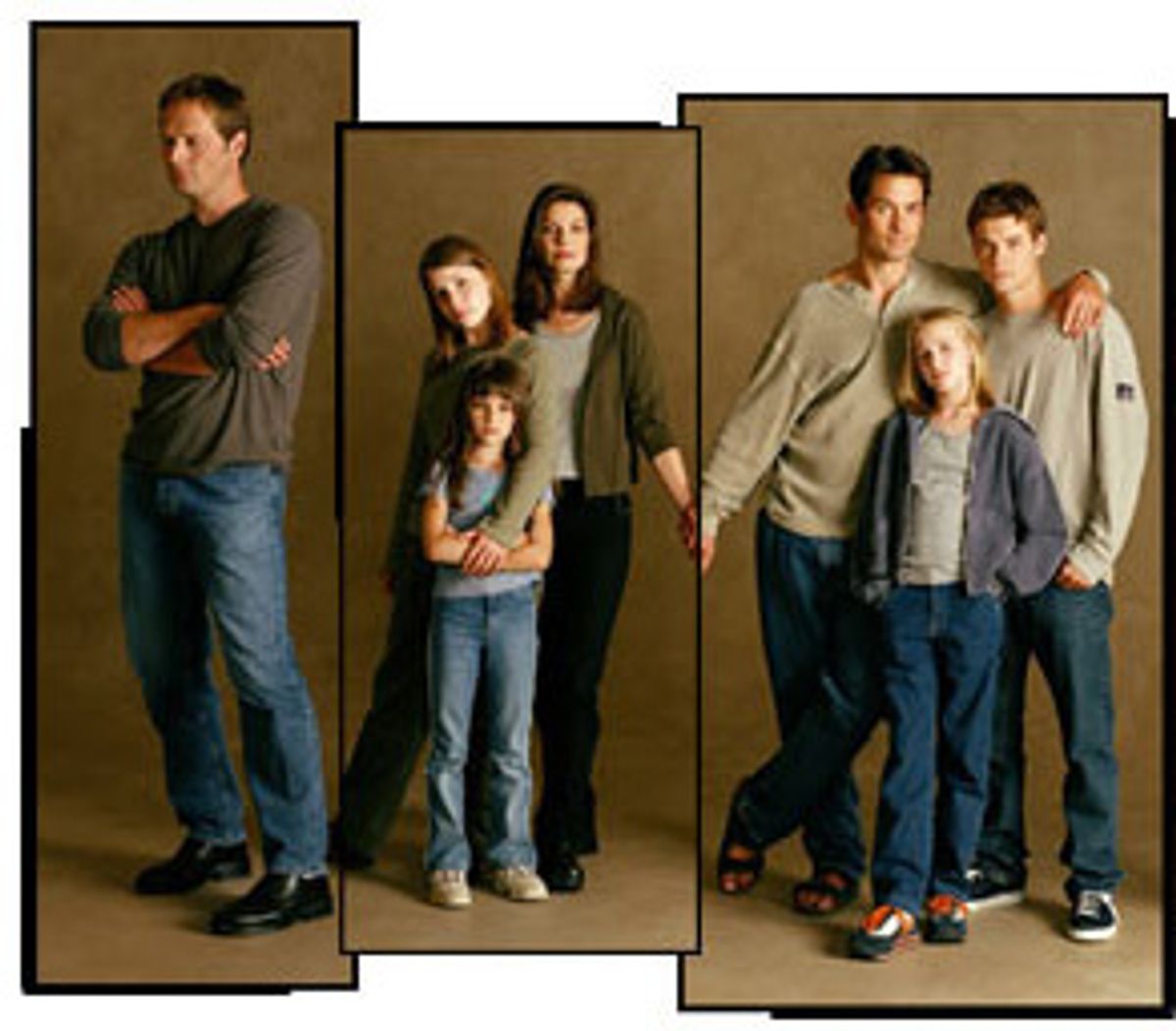 There are so many new shows about divorced people this
season, prime time is starting to mirror the actual divorce
rate. Yes, TV has come a long way since "The Brady Bunch"
coyly created a blended family by way of double-spousal
death. Nowadays, divorce dares speak its name -- loudly.
Failing at marriage is not (usually) portrayed as a scandal
or a moral flaw; on sitcoms from the old "Designing Women"
and "Cybill" to "Frasier," divorced people are, if not
thrilled with the single life, then at least happy to be rid
of their exes' baggage.

The fall's new drama series about divorce, though, are more
somber and reflective. Aimed mainly at divorced working
mothers, ABC's "Once and Again" and CBS's "Family Law" and
"Judging Amy" make a decent attempt to depict what divorce
does to a family (or at least to a white,
upper-middle-class family). These dramas are a banquet of
messy emotions -- anger, resentment, desire for revenge,
relief -- topped off with a big fat dollop of guilt, the
cherry on the sundae. "Every minute I'm here, I'm worried
about what's happening with my kids, and when I'm with my
kids I'm worried about what's happening here, and I can't do
all this!" exclaims the newly single mom-attorney of "Family
Law." Telling his kids that their parents were breaking up,
confesses the divorced suburban dad of "Once and Again," was
like taking a baseball bat and "having a good solid whack at
both their heads."

But while all of these new dramas have scenes in early
episodes where divorced parents are nearly undone by guilt,
they also have scenes where the heroines pull it together
and fiercely renew their vows to have it all -- "all"
meaning career, motherhood and freedom. Shows like "Judging
Amy," "Family Law" and "Once and Again" may be the perfect
fantasy shows for divorce-torn times; their heroines aren't
as glamorous as Alexis and Krystle and Amanda, but their
revenge tastes just as sweet.

The most elegantly crafted show in this trio is Marshall
Herskovitz and Ed Zwick's "Once and Again," which looks a
lot like what Herskovitz and Zwick's "thirtysomething" might
have become if it didn't get canceled before Hope and
Michael reached the breakup they were obviously heading
for. A decade ago, Herskovitz and Zwick based
"thirtysomething" on their own marriages, which were
undergoing the tests of parenthood, career success and
stay-at-home-mom restlessness. It's not surprising to learn,
having watched "Once and Again," that Herskovitz is now
divorced. Those guys are so plugged in to the boomer
zeitgeist, it's scary.

"Once and Again" has the duo's unmistakable imprints:
lyrically written dialogue that makes white middle-class
angst sing, emotionally voyeuristic shots of characters
being pensive, snuggly folksy background music, gold and gray autumn light.
Herskovitz and Zwick haven't lost the touch for eliciting a
deep, visceral identification with their characters; whether
that makes the characters, or us, stereotypical is open to
debate. The pilot did a fine job of portraying the
existential terror of an over-40, SUV-driving soccer mom
(Sela Ward) and football dad (Billy Campbell), whose dreams
have fallen apart; it did an even better job of depicting
their confusing, exhilarating rush of emotions at facing new
romantic possibilities.

Lily Manning (Ward) and Rick Sammler (Campbell) have teens
at the same high school. They eye each other while unloading
the kids one morning, then awkwardly chat during a chance
meeting in the school office. In the Sept. 21 pilot, after
much agonizing, he called her for a date, then another. They
had to speak furtively on the phone, because their kids were
always around listening; they necked in his SUV like
teenagers, because she was afraid to take him inside her
house, lest they get caught (they did, by her ex-husband and
two daughters). "Once and Again" has an enticing parallel
going; Lily and Rick are behaving like horny teens again
(they've shared some of the sexiest TV kisses in a long
time) at the same time his son and her daughter are
suffering their respective growing pains.

"Once and Again" (which occupies the "NYPD Blue" time slot
until that show returns Nov. 9) is not without its
drawbacks. Herskovitz and Zwick have come up with this
gimmick where Lily and Rick talk directly to the camera in
scenes shot in black-and-white; it's supposed to show them
revealing the innermost feelings they're unable to reveal to
each other. The limitations of this device became apparent
pretty quickly in the pilot; it's pretentious and annoying
and it breaks up the flow of the story (I use the term
"flow" loosely, because the show doesn't flow as much as
float). Also, Lily's daughter Grace (Julia Whelan) has been
compared by some critics to spunky Angela Chase from "My
So-Called Life," which is absurd. Grace is a whiny wet
noodle of a girl; she has anxiety attacks when her mother
leaves the house, she thinks she's fat and she can't bear that
she may actually have to interact with Rick's hunky jock
son, Eli, some day. Grace is an all-too-realistic source of
divorce guilt for Lily. In the pilot, when Lily finally went
tough-love and told her daughter, "I'm not going to let your
fear dominate this house anymore," you could almost hear
shouts of "You go, girl!" welling up from the suburbs of
America.

But for "You go, girl!" sentiments of the man-dissing kind,
it's hard to top the Sept. 20 pilot of "Family Law." In the
first scene, Los Angeles family law attorney Lynn Holt
(Kathleen Quinlan) was dumped by her husband/law partner;
not only did he run off with another woman, he took most of
the firm's lawyers and clients with him, leaving Lynn with
their two kids and no income. Lynn was floored, but soon the
survival instinct kicks in and she's stealing back clients,
hiring a flamboyant divorce lawyer played by Dixie Carter
("I hate men. And I play very dirty"), scraping "men" off
the door of the bigger bathroom and turning the urinals into
decorative planters. "Family Law" is the most
male-unfriendly show since "Designing Women"; it has a
symbolically perfect time slot opposite "Monday Night
Football."

Lynn's personal crises notwithstanding, "Family Law" is
mostly a workplace drama; the cases Lynn and her loyal
associate Danni (perky Julie Warner) took on in the pilot
represented the various ways marriages and families can go
wrong -- ex-spouses squabbling over the ashes of a pet, a
recovering junkie who wants to get her sons back from foster
parents. Written by co-creators Paul Haggis and Anne Kenney,
the pilot episode was unabashedly female-centric (the
central theme, echoing through Lynn's situation and the
junkie-mom story line, was "What makes a mother?"). But
Haggis, who worked on "thirtysomething" and was the guiding
hand for the very dark, twisted CBS crime drama "EZ
Streets," has juiced "Family Law" with surprising edginess,
stinging humor (used sparingly -- this is a traditional
drama, not a comedy-drama thing) and the brisk pacing of a
cop show. "Family Law" is still a women's show, don't get me
wrong, but there are no angels, no ghosts, no fantasy
sequences. It's one of the few shows in recent years where
women's emotions and lives are deemed dramatically
interesting and important enough to stand alone.

It's one of the mysteries of network programming why CBS
decided to launch two female-aimed dramas about divorced
mothers who work with issues of family law. Like "Family
Law," "Judging Amy" is set against the backdrop of broken
homes, custody battles and child abuse. And like "Family
Law," "Amy" looks at the bright side of its heroines'
marital break-ups -- divorce isn't swell, but a family can
go through a lot worse.

Many similarities have been pointed out in the press (mea
culpa) between "Judging Amy" and NBC's hit "Providence,"
about a single Los Angeles plastic surgeon who chucks her
practice, moves back home to Rhode Island, becomes a family
doctor and communes with the advice-dispensing spirit of her
dead mother. In "Judging Amy," Los Angeles corporate lawyer
Amy Gray (Amy Brenneman) gets divorced, accepts a judgeship
back in her hometown of Hartford, Conn., and moves
there with her 6-year-old daughter. They live with Amy's
widowed mother, Maxine (a gray-haired, crotchety Tyne Daly),
once a pioneering social worker and working mom, now a
dogmatic busybody puttering unhappily through retirement.
Maxine dispenses advice, but Amy has to hack through layers
of crusty mom-speak to glean it.

In tone, "Judging Amy" isn't much like the soft-focus,
sentimental "Providence" at all. Writer-producers John
Tinker, Barbara Hall, Bill D'Elia and their intelligence-radiating star
(who also gets a producer credit) have turned
out a crisply entertaining drama that's as crammed-full as
Amy's docket. The show's concerns include divorce and
combining career and single parenthood, of course, but also
aging, growing up, the search for personal fulfillment,
parents who can't let go and the volatile relationship
between mothers and daughters (Brenneman and Daly are
well-matched sparring partners).

Brenneman's Amy is believably overextended trying to smooth
daughter Lauren's transition to their new life while
simultaneously learning the ropes as a family court judge.
Amy is cranky, she's tired, she has doubts and guilt about
what leaving her marriage is doing to her kid. And she's got
to do it all under the long shadow of Maxine, a living
legend. But Amy is a true working-mom heroine. She takes too
much on, then miraculously finds a way to deliver; to fall
apart would be giving ammunition to those she feels are
sitting in judgment of her -- her mother, her daughter, her
ex, her boss, the stay-at-home mothers at Lauren's school.
The show's central irony is that Amy feels like she's in
over her head as a judge who has to decide cases based on
the best interest of the child when she's not even sure
what's best for her own child. Amy has yet to figure out
what Maxine has learned about decision-making: Look
authoritative and fake it.