Postcards from the Eddie

Who would ever suspect that the man who made so many awful records could create an autobiography that is such a kick in the pants? 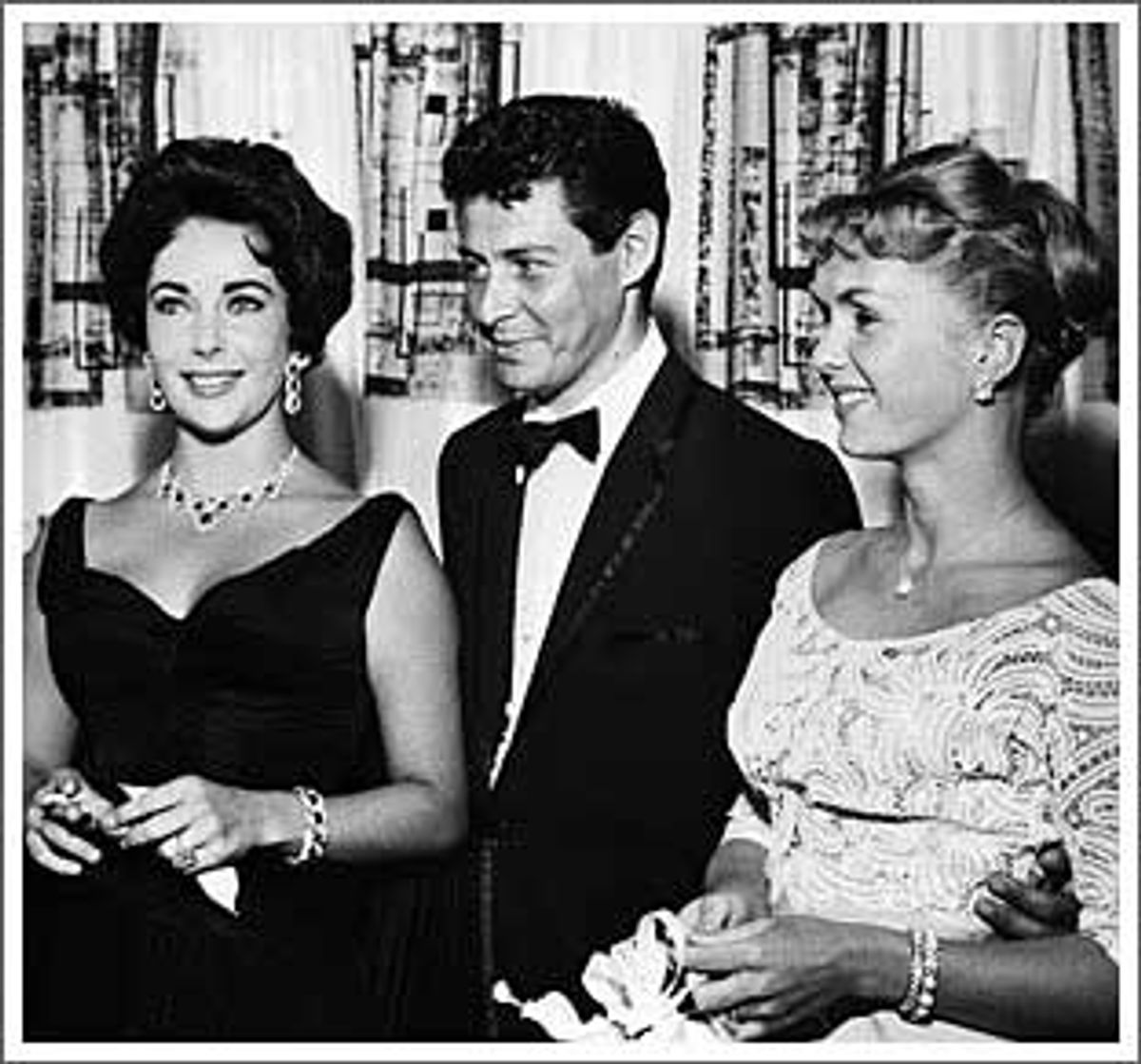 By the time he was 15, Eddie Fisher was on three different radio shows in Philadelphia. By the time he was 21, his records were selling in the millions. "I had more consecutive hit records than the Beatles or Elvis Presley," he says in "Been There, Done That." "I had 65,000 fan clubs and the most widely broadcast program on television and radio."

After returning from the Korean War, Fisher married Debbie Reynolds, the girl next door. Theirs was the ideal marriage, at least to the media. "I've often been asked what I learned from that marriage," he says. "That's simple: Don't marry Debbie Reynolds."

Soon enough, he left Reynolds for Elizabeth Taylor. And when that marriage collapsed, he got hitched to Connie Stevens. Throughout all these musical chairs, he was singing, pouring out records -- and the money was pouring in, along with the women. Queen Elizabeth asked him to dance; Bette Davis "made drool eyes at me." He knew, sometimes intimately, Ava Gardner, Audrey Hepburn, Marilyn Monroe, Gina Lollobrigida, Brigitte Bardot, Joan Collins, Sue Lyon, Lana Turner, Margaret Truman. So much fun, so many parties. One wonders how he was able to find time to record songs between his bouts of passion.

In anyone else's hands, this would be your typical ho-hum let-me-tell-you-about-being-a-star-and-getting-laid routine. But there is something else going on in "Been There, Done That." First, Eddie Fisher and his co-writer know how to put words together. The story is fascinating; the one-liners are funny; the vignettes are out of this world. Especially when he is telling us exactly what it was like to live with Elizabeth Taylor: "She was drinking and taking pills and passing out. She was constantly passing out. It was just awful; not awful enough to make me miss my life with Debbie, but awful."

Once when he threatened to leave, Taylor swallowed an entire bottle of Seconol. "I tried to stay calm," Fisher writes, "although it's hard to stay calm when foam is coming out of your wife's mouth." Another time, he dared to venture the opinion that she should do something about her addictions. "Elizabeth, what would you think about going to see a psychiatrist?" he asked.

"As it turned out, not very much," Fisher recalls. "She erupted. She started screaming at me ... She got out of bed, totally naked, and ran down the stairs. I ran right after her. She got into her Cadillac and turned on the engine. It was crazy, this hysterical naked woman trying to drive while I ran alongside the car, holding on to her door. I was begging her to stop, telling her, 'It's not you, it's me. I'll go to the psychiatrist. I'll go, I'll go, it's me ...'"

There's a genuine juvenile enthusiasm in "Been There, Done That." It's the sense of wonder that you or I would have if we woke up one morning as a star. And we get the feeling that Fisher's still stunned that a poor kid from the streets of Philadelphia could end up, all of a sudden, living "under the bank on the hill, where the money just rolls down." With Elizabeth Taylor.

The tale of Elizabeth and Eddie -- they called him "Mr. Taylor" -- is enough to make a grown man cry ... and, often, to laugh: "The one thing that it was impossible to ever forget when you were with Elizabeth Taylor," he tells us, "was that you were with Elizabeth Taylor ... She was smart and funny and beautiful. And sexy. Very, very sexy. Sexually she was every man's dream; she had the face of an angel and the morals of a truck driver."

Fisher did not marry Elizabeth Taylor. Rather, he entered into a contract with her to let her run his life, and to be subject to her every whim, to deal with her incessant pill-taking, her endless boozing, her tantrums, her sulks, and her impossible Jezebel nature. "I had successfully made the transition from one of the country's most popular singers to Elizabeth's companion and nurse," he writes. "I was caught in a magnificent trap, and even though I was madly in love with her, it was still a trap. I'd forgotten who I was ... The only singing I was doing was around the house."

And what did he do when he she ran off with Richard Burton? "I couldn't stop loving her, and needing her. I missed her more than I had ever missed anyone in my life. I couldn't sleep. I couldn't eat. I couldn't sit still, so I did the only thing that made sense at the time. I appeared on the television quiz show 'What's My Line' as the mystery guest."

Fisher's final meeting with Taylor gives him a chance to reflect on what he had been to her -- and what Burton was now to become: "We met at their suite at the Regency. I was surprised at how the balance of their relationship had changed. Elizabeth was in complete control, Burton had become almost docile and very domesticated ... As Elizabeth and I were talking, he was performing all my old duties: He was picking up, giving her a pillow, pouring drinks. He had become her nurse. Maybe he was doing 'Hamlet' onstage, but in real life he was playing my role."

Fisher's first experience with drugs came from one Dr. Max Jacobson. He remembers the date with exactitude: April 17, 1953. And he didn't stop for 37 years. Most of the famous people he knew -- in show biz, in music, in politics -- were doing it. Even John Fitzgerald Kennedy: "I had arrived at Max Jacobson's office for my shot and found the place in an uproar. 'Come wit me,' he ordered. 'I haf to see the President.' I knew Max had very powerful friends, but the President? ... With Max, anything was possible. Max could make night into day. Max with his filthy fingernails and his magic potions treating the President of the United States?"

According to Fisher, the president took Dr. Max with him when he went to Vienna for a summit meeting with Russian Premier Nikita Khrushchev. "Looking back on it, it's amazing how we all just accepted the fact that the President was taking Dr. Feelgood with him to a meeting that would affect the entire world. The fate of the free world rested on Max's injections. I can still see Max taking a little from this bottle, a little from that one, and 'pull down your pants, Mr. President.'"

What sets Fisher's tale apart from the thousand-and-one other I-Was-A-Star books is the fact that he is obviously no dummy. He's someone who can tell us his funny-sad tale with wit and a certain amount of astute introspection. And occasionally, he will stop and make a cogent summary of the foolish things he's done with his life: "By the time I was thirty-three years old I'd been married to America's sweetheart and America's femme fatale and both marriages had ended in scandal; I'd been one of the most popular singers in America and had given up my career for love; I had fathered two children and adopted two children and rarely saw any of them; I was addicted to methamphetamines and I couldn't sleep at night without a huge dose of Librium. And from all this I had learned one very important lesson: There were no rules for me. I could get away with anything so long as that sound came out of my throat."

Who would ever suspect that Eddie Fisher, the man who made so many awful records -- songs he himself calls "bubble-gum" -- the man who was shooting meth and cocaine for 37 straight years, the one who bungled several marriages with several of the most gorgeous women in Hollywood -- who could ever guess that he would create an autobiography that is such a kick in the pants?

This is a man who, literally, got a shirt off of JFK's back; one who loved the loveliest women of our time; one who hung out with all the stars and the mafioso kings; one who turned down part ownership in Caesar's Palace ("I wanted nothing more to do with Caesar and Cleopatra"); the man who abandoned all his children, the man whose third wife would write, "I wish you good luck, good health and wealth and happiness in your own time on your terms -- I do not wish you love as you wouldn't know what to do with it."

Fisher is a man who shot up with the stars, and who ended up, in his most desperate days, travelling with "Roy Radin's Vaudeville Review," also known as "The cavalcade of has-beens," along with Tiny Tim, Georgie Jessel and Donald O'Connor, "who was whacked out of his mind most of the time."

When he was on top, he says, "I walked into theatres and championship fights without a ticket. I could make a phone call and have airplanes wait for me. Now I had to learn how to lead a normal life."

Fisher is now 70. Surprisingly, he survived. He makes it quite clear that even now, his main regret is that he wasn't able to hang onto his No. 1 shiksa, Elizabeth Taylor. This juvenile passion and his endless roll-call of sexual conquests are not very impressive. But we are impressed that Fisher is able, at this late date, to come up with a brand new act, one associated neither with his music nor his weenie.

Here we have a faded pop star who has, out of the blue, developed a brand new trick that he doesn't even mention in his book: The ability to write winningly and well. "Been There, Done That" is self-deprecating, and droll -- and sometimes very sad. But all the while it's honest, and very, very good.