Thinking outside the cube

Philippe Kahn programmed one of the first personal computers, now he's developing wireless Net technology that could unchain people from their PCs. 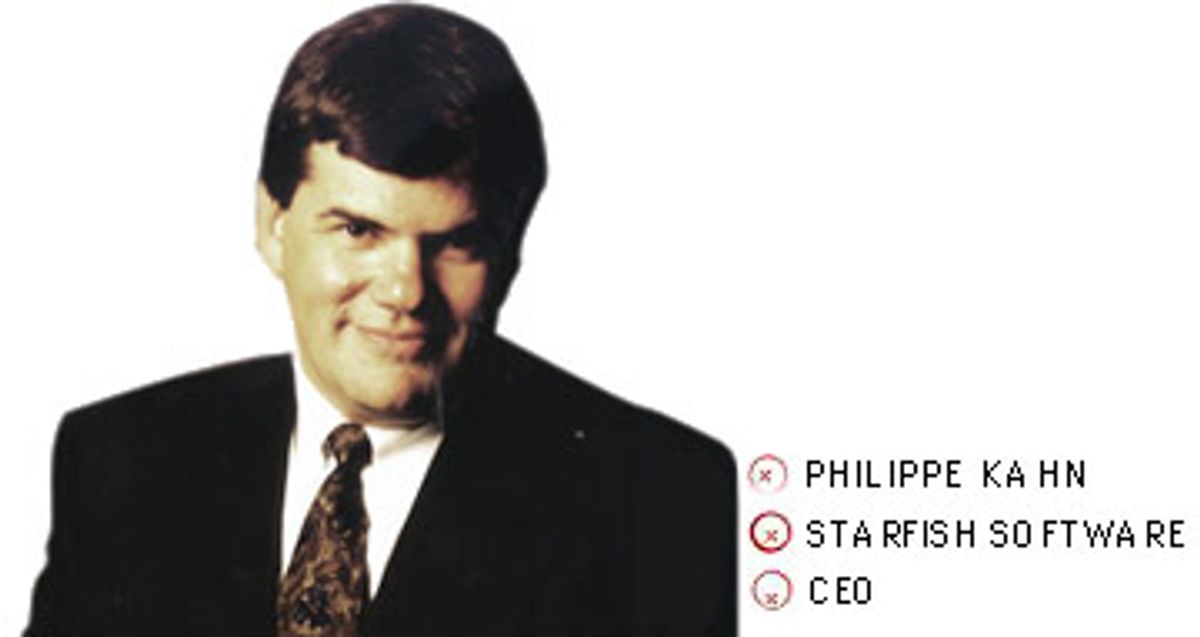 The words "Internet entrepreneur" make most people think of whiz-kids barely out of college. But Philippe Kahn, CEO of Starfish Software, is an Internet entrepreneur with a track record as old as the PC itself. The French-born mathematician began his career in Zurich, Switzerland, working on the Pascal computer language, and then became one of the first programmers on the Micral prototype computer in 1973. Although the project never made it into the U.S. market, it's considered the first true PC, predating even the Altair.

By 1982, Kahn had emigrated to the United States and used his programming experience to create Borland International (now Inprise), a pioneering software development tools company that was for a time one of the world's largest software companies. At Borland, Kahn waged a tough head-to-head battle with Microsoft that eventually led to Borland's near financial collapse and Kahn's resignation in 1994. But Kahn, 47, isn't bitter about the experience. Instead, he credits his Microsoft-dealt defeat with helping spur his move to the Internet.

Starfish Software, which Kahn founded with Sonia Lee in 1994, focuses exclusively on technology that links Web applications to wireless devices such as cell phones, hand-held organizers and pagers, as well as desktop PCs. His vision is of a future that is not PC-dependent, but one in which computer appliances like cell phones and organizers connect to the Net or with each other to provide us with all the information we need.

Wireless giant Motorola, impressed with the company's wireless Internet technology, snapped up Starfish in 1998. Kahn has retained the CEO slot in Starfish's Santa Cruz, Calif., offices, and this year launched a start-up called LightSurf, which he says is a top-secret venture that will expand wireless Net capabilities to include imaging and photographic applications. (Despite my asking many questions, he would say no more about LightSurf.)

Though his passion for technology remains keen, Philippe Kahn's priorities have changed a fair bit from his warring-with-Microsoft era. These days, whether he's playing jazz, snowboarding, sailing competitively or building new technology, having fun is what inspires him the most. Salon spoke with Kahn while he was in San Francisco preparing for a sailing race.

As a former Microsoft competitor, do you have any advice for Judge Jackson as he prepares a decision on the antitrust suit?

Although I have competed with Microsoft, I have always preferred to pursue innovation rather than litigation. I don't want to get into whether Microsoft is a monopoly and what's legal or not, because I'm a technologist and I'm personally not interested in that discussion.

It's no secret that Microsoft doesn't succeed through innovation. They succeed through leveraging their incredible position in operating systems and their financial power to move into new markets. Whether that's illegal or not, I don't know. Actually, to date the courts have said it's perfectly legal. Take the complaint that Microsoft gave away its browser for free just to try and put Netscape out of business. Isn't that exactly the same thing Sun Microsystems plans to do with Star Office? They're going to give away Star Office to compete against Microsoft Office, and that has nothing to do with thin-clients or innovation. It's simply Sun doing to Microsoft what Microsoft did to Netscape and Borland. Is that illegal? I'm not sure, but so far no court has said it's illegal.

As far as a broken-up Microsoft, people should be concerned that they may get what they ask for, and that two Microsofts may in fact increase Microsoft's total market dominance. Look at AT&T, Lucent and the Baby Bells: They're are all doing very well right now.

Do you carry any lessons from your years of competition with Microsoft into new business ventures such as Starfish Software?

Borland/Inprise competed very successfully with Microsoft for more than 10 years, until Microsoft's position in operating systems became so dominant that it became very hard to grow a profitable professional tools business. The main lesson here is to make sure that a new business model remains viable even if a larger competitor expands its share of a related market.

When building Starfish, and now LightSurf, we made sure that we focused on markets that are new, that are growing fast, and where there is an assurance of diversity. Wireless Internet is growing super fast because one of the most desired and popular devices in the world is the cell phone. Within the next three years, most digital cell phones will also be wireless Internet devices. That's hundreds of millions of new wireless Internet devices, and diversity is assured because the wireless world is already diverse with key players such as Motorola, Nokia and Ericsson. Nobody is at risk of establishing a monopoly at this point.

Do you think that the Internet, compared with other markets, is more welcoming to diversity and innovation?

Absolutely. By definition the Internet is an open environment, and I think the Internet will not accept a dominant player. You know, when AOL tries to play tricks with its instant messaging, people say, "Hey, that's horseshit, you can't do that. You make Microsoft look good when you do that." I think the Internet has a global conscience that a closed environment like the PC-world doesn't have. It's going to be very hard for anyone to eat up the Internet market.

What else attracts you to the Internet?

It's a technology-driven environment, which some people may forget. A lot of the so-called heroes of the Internet are basically glorified retailers and mail-order catalogs. They're extremely successful financially, but from a technology standpoint there's not much innovation there. But right now, wireless Internet is all about innovation because it's a new frontier. We're talking now about the Internet becoming a complete, empowering, universal way of networking, not just in your cubicle, but anywhere, anytime. I think we're going to see the Internet enable two-way communications in a much more powerful way, with medical applications, sound, images and other applications. We haven't seen anything yet compared to what's going to happen with wireless Internet.

Is your focus on mobile computing a break from your programming and tools background, or was it a logical evolution?

With Starfish and now LightSurf, Sonia Lee and myself looked at the "next step." I like to say that in the 1970s with the Micral, we built the first PC. In the 1980s we brought object computing to the PC with the best rapid application development tools. Now in the 1990s we've focused on the smaller devices and on wireless Internet. My career has always been focused on developing efficient technology that is innovative, fast and compact, which also are key elements to success in the wireless Internet market. It's a very challenging technical world that calls on my entire engineering background, because there are super-scalable server components, ultra-small programs embedded in the devices, and then there's desktop programming to make applications work with Outlook or other systems. So it takes a lot of know-how in many different areas, and that's what makes this world a lot of fun.

What are some of the main obstacles to making the true wireless Internet a reality?

For the industry, infrastructure is the biggest risk, no question. Fortunately, we see billions of dollars being invested in wireless infrastructure worldwide, so the question is not whether it's going to happen, but when. I say certainly less than three years.

We recently saw how expensive and risky the infrastructure market can be when satellite communications company Iridium declared bankruptcy. Was that a company-specific execution problem, or symptomatic of an industry-wide weakness?

I think Iridium never really understood its own business model. There's a tremendous market for the infrastructure they've built, but not the market they decided to go after. Iridium went after businesspeople with a world phone, but the phone didn't work inside any office building because it was line-of-sight -- you had to go outside to get a connection! I don't know what they were thinking there.

But they can still leverage that infrastructure in more specific markets. For example, forget the telephone and look at Iridium's two-way pager application. It's the only global pager you can get today, and that is a tremendous product that they really haven't marketed. I know because I use one myself. I was recently in New Zealand on a snowboarding trip, and I received a page in the middle of the Southern Alps, close to Antarctica. Nothing else could reach me there. I will pay a premium for that, and many other people will, too. Cellular phones are not everything. In fact, I think global wireless messaging is more interesting than cellular phones.

So even with all your interests outside of technology -- sailing, snowboarding, your jazz band -- it sounds like your career in technology isn't ending anytime soon.

I love what I do. My family have been engineers for five generations and I think that we may have had a mutation in our gene pool. But to keep things fresh I'm trying not to do the same thing twice. There comes a time when you don't do things for money, you do them for the fun. It's the same reason, probably, that Miles Davis was playing for so long. Miles didn't have to play trumpet all his life, he didn't have to make a living, but he wanted to play. And I feel very fortunate that that's the case for me.

Sean Donahue is a staff writer at Business 2.0.