Thelma and Louise it wasn't

When you can't vacation without them, the kids can come too. Just change your expectations and leave your husbands behind. 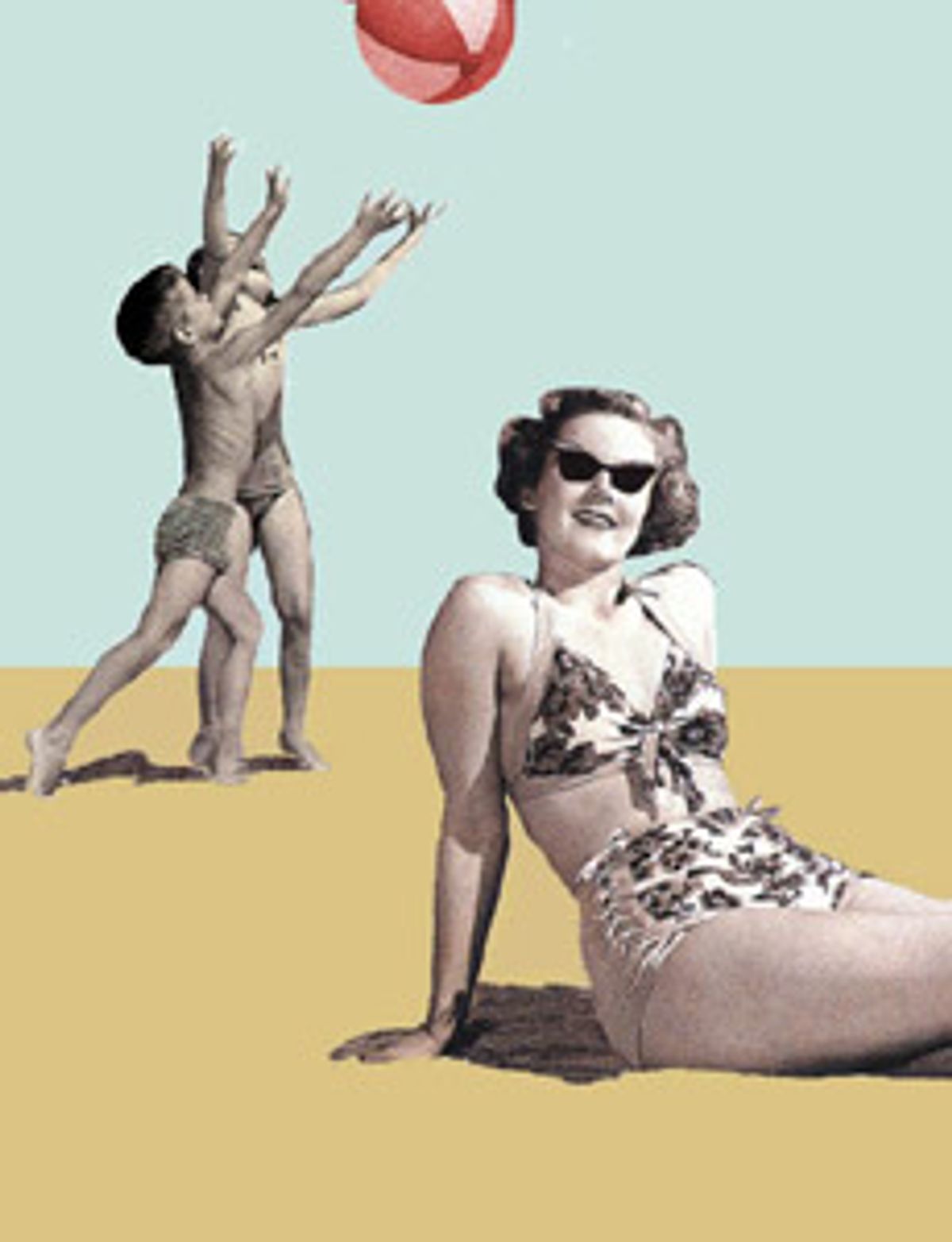 We'd been talking about doing it for two years, but a few weeks ago my friend Maura and I finally succeeded. We spent three blissful days vacationing together in the lovely resort town of Newport Beach. We were not on anyone's expense account. We also were not alone. We had four kids in tow, ranging in age from 6 to 11, and in prickliness from zero to off the charts.

This was not the original plan, to bring children. We were prepared to leave home without them. And we tried. For months we exchanged e-mails and phone calls, fantasized about camping in Point Reyes, a condo in Palm Springs, various California spas. But as the weeks ticked by it became clear that we were literally going nowhere.

"Why can't we do this?" Maura asked in frustration one day on the phone.

"I don't know," I said weakly. "Our lives are too complicated?"

Actually, I knew full well. Men do this all the time, have yearly reunions with their friends at ski resorts in Telluride or golf courses in Scotland or casinos in Vegas. I'd rather eat nails, frankly, than spend a minute playing golf, even in Scotland, but the point is that many of the fathers I know do it. They get away with their male friends, never fearing the onset of crippling guilt (a condition of motherhood they should warn you about the second you think of getting pregnant).

In the end, my friend and I were too exhausted by the thought of all the arrangements we'd have to make to go by ourselves. Her husband travels, mine has writing deadlines, plus we both have demanding jobs. Sure, the dads could take the reins, would probably even enjoy the novelty of providing total childcare for three or four days, but then we'd have to hear about it for six months -- the sacrifices they made, the fights they had to referee. Or -- and this is almost worse -- they would regale us with stories about how beautifully the children behaved in our absence. We finally conceded that if we waited to find a good weekend, it might be the millennium before we saw each other.

Our solution was to take the kids and leave the husbands, who would undoubtedly change the dynamic. (I can hear the battles over Nickelodeon vs. CNN and the ESPN vs. HBO now.) The men wouldn't want to do what we did. We'd have to worry about pleasing them, on top of the kids. The unvarnished truth was, we'd have more fun if they didn't come.

When I look back now, it was one of those golden trips when everything went smoothly. "Can you believe this?" my friend and I would say to each other. Parking spaces opened up upon our arrival; a pod of dolphins rose from the Pacific as we munched hamburgers on the pier. Even the first day at Disneyland, which I normally find about as appealing as dental surgery, I didn't completely loathe. The lines were reasonable, the heat bearable and the kids readily agreed which rides they wanted to go on and in what order.

We booked adjoining rooms and focused on forbidden leisure. Most of the time the kids were huddled in one room doing their thing, while my friend I occupied the other, the door firmly closed. We actually relaxed in a way that I would never permit myself to do at home. One morning we lounged around in our PJs until 11, the drapes still shut to the bright sun, watching a pay-for-view movie on television and idly reading the Sunday papers tossed carelessly on the bed. Every so often -- typically, when we were laughing about something -- a child would wander in and flop down on the bed, a touchstone gesture of sorts, to make sure we hadn't forgotten them. We had.

Critical to our success were our very low expectations. Once we had relinquished the Thelma and Louise vacation dreams, we established a new bottom line. If we got to have a margarita by the pool and the boys didn't squabble, it was a victory for our cause. When we actually had a good time, we were positively gleeful.

On our last day, one of those sweet unexpected moments happened, one I know we'll all remember for a long time.

About noon, we piled into the car and headed to Corona del Mar, a pretty beach south of Newport nestled beneath some gentle bluffs. The four kids soon disappeared into the surf on their boogie boards, while my friend and I kept an eye on them from the comfort of our beach chairs. After a while, my friend's daughter came in and said she wanted to learn how to body surf. But since she rarely swims in the ocean, she was intimidated by the waves.

"Oh, honey," my friend sighed. "I haven't been in the ocean in a long time. Why don't you go in with Mona? She's a great body surfer. She'll teach you."

My friend's daughter was quiet. As she stood there on the sand, her arms folded across her chest, I could see the uncertainty on her face. She liked me, but she also didn't know me that well. Would she feel safe? On the other hand, her mother and I were close, like sisters. Surely she could trust me. "Come on," I said, holding out my hand, smiling.

She took my hand without saying a word and we walked down to the shore.

The water was packed with boogie boarders and the waves were coming in quickly, breaking more forcefully than before. I scanned the ocean until I found a less crowded spot for us to wade in.

"Just hold on to me and don't let go," I told her, as we began pushing our way out through the waves. "You'll do great." She nodded and gripped my hand even tighter.

I grew up around beaches, and I can't recall ever being afraid of the ocean as a young girl. But I soon realized that for my friend's daughter, this was more than a casual swim. Coming out here, testing herself in an environment she didn't know, was a rite of passage for her -- one she was determined to master.

As the strong waves rushed toward us, she listened to my every word, followed my every instruction, her young sweet face focused and intense. She gripped my hand hard when we jumped over the waves and bobbed around on the foamy surface like sea gulls, until our feet securely touched bottom again. I explained to her how the waves form patterns, and how to recognize them. I taught her how to know when to dive under a wave, and when to leap over it. I could see that she was frightened at times. "Are we going over this one?" she'd say in a tight high voice. "Under? Under?"

Once, when she tried to push up over a wave too late, the sea crashed over her, sucking her down. When she burst back up to the surface, she was gasping and on the brink of tears.

I glanced back towards the shore and saw my friend. She was watching us. "Oh, god," I thought grimly, "she's going to think I'm drowning Mary Ellen."

When she was comfortable enough in the water, I had Mary Ellen watch me body surf, then I explained what to do. I told her how to watch the approaching wave and that when it was shaped like a crescent moon and straining to break, she should begin to swim furiously and take off. At first she couldn't get the timing, her muscular arms slicing the water too soon or too late. But she refused to give up. Finally, after many tries, she nailed one.

When the two of us finally staggered out of the water, you would have thought we'd swum the English Channel. There, amid the sea of beach umbrellas, blankets and coolers, were my friend and her son and my two kids. They were on their feet, clapping and cheering.

"You did it!" my friend beamed, wrapping a towel around her dripping, shivering daughter, who smiled shyly. "That was terrific!"

When I realize that one of my clearest memories of our last family vacation was of an ugly incident over dinner at a hula show, I am at peace with our wholesome, gal outing to the beach. We did it. It was terrific.

We may even do it again.

Mona Gable is a freelance writer whose essays have appeared in the Wall Street Journal, the Los Angeles Times and various magazines. She lives in Los Angeles.