The flood next time

Hurricanes may be the hand of God, but the disaster in North Carolina is entirely man-made 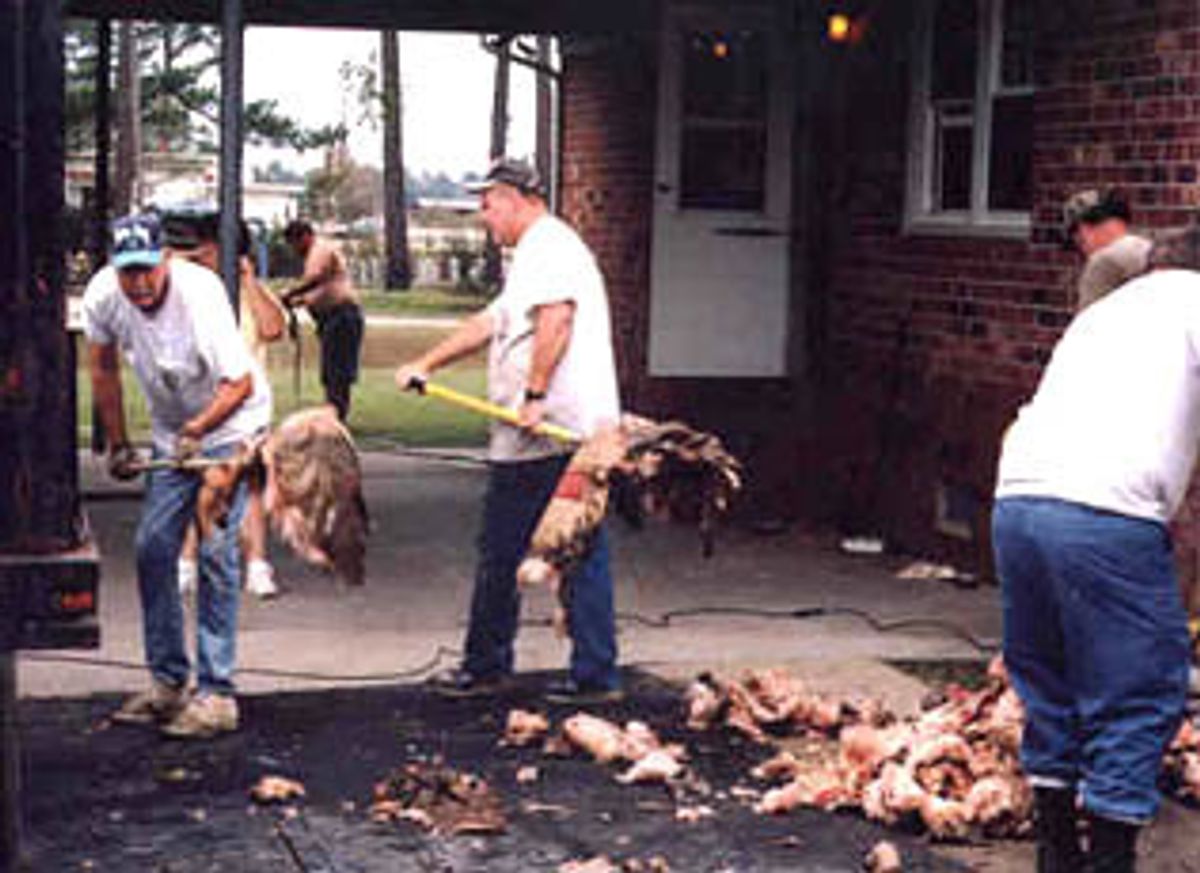 A hideous stench hangs in the air of Duplin County. It's a smell unlike anything else: rotting animal carcasses, raw sewage, animal waste and decaying vegetation. Pools of rank, fetid water topped with an oily rainbow slick stand everywhere. This was the scene revealed when Hurricane Floyd's record-breaking floodwaters receded.

Driving down Highway 41, the main artery in that quarter of Duplin County, things appear normal from a distance. The once-submerged houses along that route are now above water, and mostly appear undamaged. On closer inspection it's clear that almost every house is abandoned. All of the furnishings, carpeting, linoleum, drywall, clothing and household goods of the occupants are piled high in the yards waiting for trucks to haul them away to the dump.

At some houses a pall of black smoke hangs in the air, as the owners pile their contaminated belongings onto enormous, fiery pyres, sending contaminants into the air. The empty houses, without their window dressings or drywall, doors and windows open wide, appear skeletal, like gaping skulls.

The floodwaters in Duplin County were so contaminated by drowned hogs, spilled and overflowing hog lagoons, drowned poultry, human sewage and other contaminants as to render anything soaked by them unsalvageable. Most area residents are picking up bottled water, afraid that the groundwater and rivers from which the people of Chinquapin draw their water are so thoroughly contaminated that it will be years before it's safe to drink again.

They're probably right. Leon Chesnin, professor emeritus of waste management and utilization at the University of Nebraska at Lincoln, said that it takes 20 years for the waste from a hog lagoon overflow or spill to filter down through the groundwater and another 20 years to clean itself. That means the water will be contaminated for another 40 years, two generations.

In addition to animal wastes from an estimated 100 flooded or spilled hog lagoons and a large number of poultry operations, 24 human wastewater treatment plants flooded and hundreds, possibly thousands of tanks containing petroleum products, pesticides and other chemicals spilled into the waters. Thousands of flooded homes, businesses, automobiles and junkyards released toxic chemicals into the floodwaters.

A hurricane may be an act of God, but the magnitude of the environmental disaster in North Carolina was strictly man-made. Much of the flooding and the groundwater contamination can be attributed to the state's furious drainage and development of wetlands areas, and its resistance to vigilant environmental regulation of agribusiness.

Although Gov. James B. Hunt is calling Floyd a "500-year flood" and assuring residents that it will not happen again during their lifetimes, that's not strictly accurate. In fact, heavy rains began again Monday night and were expected to continue at least through Wednesday.

"It wouldn't take much rain to bring the floods back up to the same levels as a week ago, or higher," says Stanley Riggs, a marine geologist at East Carolina University who specializes in the study of North Carolina's estuaries and coastal systems. "This whole [river] system is just waiting to go again."

It's true that the extent of this month's flooding was unprecedented, but the heavy rainfall is not without comparison. Two hurricanes, Floyd and Dennis, hit North Carolina just weeks apart, both dropping heavy rains. Yet there have been other cases of multiple hurricanes battering the state.

In 1955, for instance, three major hurricanes, Connie, Diane and Ione, hit North Carolina, just weeks apart. All of them dropped extraordinarily heavy rains, in a year that had already featured massive storms. The result was major flooding, but the casualties and physical damage were not nearly as extensive as this year. Ione killed five people; the death toll from Floyd is 47 and expected to rise.

And Ione's flooding did not reach lands that are considered within the "500-year flood plain." Floyd's did. "The magnitude of this flood is an entirely human-created event," says Riggs. "Dennis and Floyd were relatively small hurricanes, not whomper storms."

Most scientists believe the reason for Floyd's massive damage the massive drainage of the state's wetlands. The loss of wetlands exponentially increases the amount of damage caused by flooding from storms like Hurricane Floyd.

Doug Rader, a biologist with the Environmental Defense Fund who's conferred with a number of other experts about the flood, said, "We, as scientists, believe that a significant part of the flooding and the severity of its impact is a result of poor management decisions [regarding wetlands] made over the last 30 years. It is our opinion that intensive land use in marginal areas has directly contributed to the seriousness of the flooding from expectedly and predictably large amounts of rainfall."

Wetlands provide a natural escape valve for flooding, by distributing and absorbing excess water. Swamps and marshes absorb and disperse floodwaters, and areas called "dry wetlands," found around the headwaters of streams and in the 100-year flood plain, complete the job. Wetlands serve another function as well: They're a natural filtration system, like human kidneys, removing from the waters all sorts of toxins and pollutants, especially nitrates from animal waste, which remove oxygen and can kill fish. All of North Carolina's shellfishing beds are closed now and experts expect major fish kills in the future.

While the dry wetlands are one of the most important natural resources for controlling and containing floods, they are also the most vulnerable to being lost, because they're not picturesque like marshes and swamps, with their cattails and swamp grasses. It's more difficult to make a case for the preservation of dry wetlands, and much easier to engineer their draining than wet ones. Consequently, housing developments, factories, junkyards, hog farms, hog lagoons, agricultural operations and other businesses have cropped up in the 100-year flood plain, legally.

But the consequences of building in the flood plain have been two-fold: Not only did it deprive the area of a natural barrier against flooding, but the structures located there, once submerged in water, released what one state official called "a witch's brew" of toxic substances -- household chemicals, chemicals and petroleum products from automobiles, both operational and in junkyards, pesticides and fuel oil into the water.

The 24 human wastewater facilities that flooded don't begin to tell the story of human-waste contamination of the waters. The EDF's Rader said that most municipal sewage lines in eastern North Carolina ran through the flood plain to take advantage of the natural drainage properties, and save money cities might have spent building pumping stations and elevated sewer lines.

There's no way to tell how much sewage leaked into the flooded waters through manholes and other outlets on sewer lines built where they shouldn't have been. Kinston, for example, a small city with a population of around 25,000 people, is built on the Neuse River. Rick Dove, the Neuse River keeper, said that Kinston's sewage treatment plant, built in the Neuse flood plain, was totally submerged by the floods.

"That means," he said, "every toilet that flushes in Kinston during the flood discharges directly into the Neuse." Dove, a pilot, said that the Neuse is now a maroon color from waste and chemical spills.

The legislature has repeatedly refused to approve legislation restricting or regulating building in flood plains, or to provide funding to enforce enacted regulations. Don Reuter, spokesman for the state's Department of Environment and Natural Resources, said that in the 1988 and 1989 sessions of the General Assembly, the legislature refused to provide funding for a wetlands protection bill the department supported that could have mitigated the extent of the flooding had it passed.

Likewise, the state has balked at regulating the agriculture industry, whose lax treatment of animal waste has contributed to the pollution problems. North Carolina has more hogs than people, around 7 million people to 9 million hogs, and a hog produces between two and five times as much waste on a daily basis as a human. Yet hog farmers haven't been required to treat the waste, or dispose of it in an environmentally sound manner. Most store the waste in open-air hog lagoons, essentially ponds filled with hog waste. When the lagoons filled, they were allowed to reduce the level by spraying the untreated waste on fields, where it ran off into the watersheds.

In 1991 the legislature passed a bill that enabled the state to levy strong fines against polluters for discharging animal wastes into streams, but an amendment tacked onto it by Sen. Wendell Murphy, then the state's largest hog farmer with a billion-dollar operation, exempted poultry and hog farms. That same year, a bill allowed the North Carolina Pork Producers Association to collect a 1 cent per hog levy, in order to lobby legislators and pay for defense against lawsuits brought against the hog industry.

But 1995 saw two big events: The Raleigh News and Observer ran a multi-part Pulitzer Prize-winning exposé of the hog industry, and an eight-acre hog waste lagoon at Ocean View Farms in Onslow County spilled more than 20 million gallons of waste into the New River. Both led to calls for stricter regulation of the industry.

After 1995 some momentum began to shift away from hog farmers. EDF lobbyist Dan Whittle says that most proposed environmental regulation of hog farms has passed since 1995 -- but almost always in a significantly weaker form.

The legislature, for instance, put a moratorium on establishing new hog farms or expanding existing ones, unless they implement new, environmentally safe measures to deal with hog wastes. But existing hog farms were not required to do away with hog lagoons or convert to new waste management technologies, and many farms have been able to expand dramatically, without imposing new systems, thanks to loopholes in the law. The legislature also has refused to mandate new waste-management methods for existing farms all three sessions since the moratorium went into effect.

The worst is not necessarily over for North Carolina. The Atlantic Ocean is in the beginning years of a 10- to 15-year cyclone cycle, and hurricane activity is picking up, says marine geologist Stanley Riggs. "If a severe storm hits North Carolina and drops a lot of rain in the next two weeks things will be worse than they've been. It doesn't have to be a hurricane, but if a Category 5 hurricane hits anytime, then look out, this flood will seem like nothing," Riggs said.

A Federal Emergency Management Agency official working at the State Emergency Response Team command center said that some parts of eastern North Carolina got up to nine inches of rain Tuesday, and another four inches were expected Wednesday. Most rivers won't crest for another three to five days.

"I'm afraid things are going to get worse before they get better," the FEMA official said.