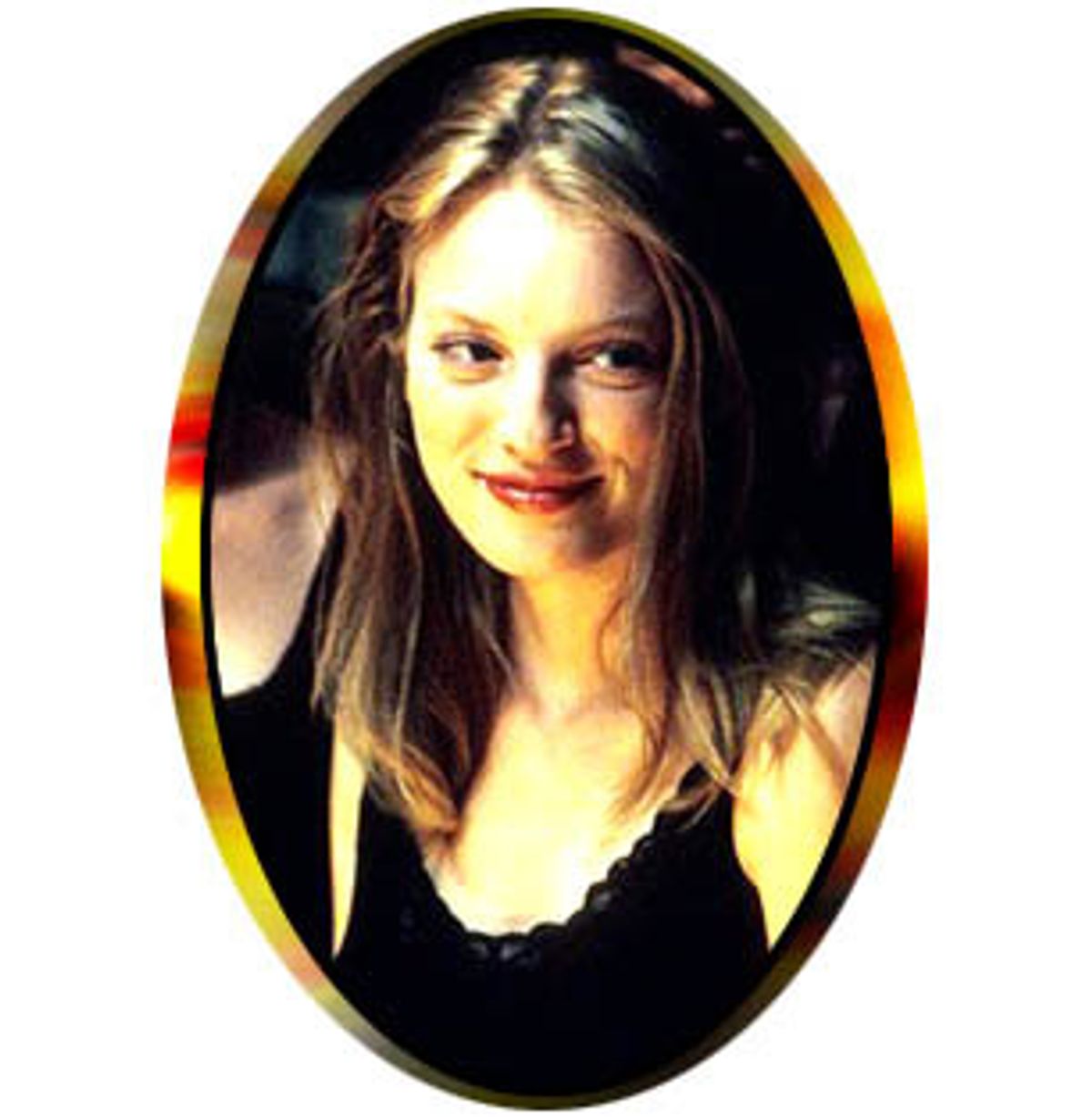 It's probably not possible to talk about "Guinevere," the story of the love affair between a 20-year-old girl (Sarah Polley) and a middle-aged photographer (Stephen Rea), without confronting a piece of baggage that has dogged the movies for a few years now. So indulge me. To be blunt: There are a lot of people who regard any movie in which a young woman is sexually attracted to an older man as proof of the sexism that rules movies. There's some justification for that view. Men continue to get cast as sex symbols well into their 60s while women over 40 get shunted into asexual mom roles (as is happening with Michelle Pfeiffer).

But the problem isn't that older men and younger women are cast as couples; the problem is that it doesn't work in reverse. (For instance, the scene where Sharon Stone goes to bed with Leonardo DiCaprio in "The Quick and the Dead" was chopped to a brief morning-after scene.)

What bothers me about the criticism is that, these days, the question of whether there's actually any chemistry between the actors is treated as if it were irrelevant. Sean Connery and Catherine Zeta-Jones in "Entrapment" (zilch chemistry) is lumped in with Connery and Pfeiffer in "The Russia House" (a dream pairing). Woody Allen's genuinely creepy pairings with Helena Bonham Carter and Mira Sorvino aren't distinguished from the loosey-goosey give-and-take between Anne Heche and Harrison Ford in "Six Days, Seven Nights." (Do we have Heche to thank for restoring Ford's old smartass charm?) People often seem to have been brought together in the movies because their talent and charisma make them dream matches. I don't want to see those pairings limited by age any more than I like that they continue to be limited by gender and race. If you object to casting simply because an older man gets cast against a younger woman, you're substituting ideology -- discriminatory ideology -- for judgment.

"Guinevere" may escape that criticism. First of all, it was written and directed by a woman, Audrey Wells, and the incongruity in her lovers' ages is her subject. Secondly, the relationship between Polley's Harper and Rea's Connie is so recognizable that nobody is likely to claim it a stretch. We've all known smart, beautiful, dreadfully insecure young women who gravitate toward relationships with older men that are both a dare and a security blanket. Feeling so lousy about themselves, they can't believe that someone with some experience would be attracted to them, and they put up with all manner of nonsense that a more experienced woman would see right through, largely because they're afraid that if they don't, they'll find that no one else does want them.

That's largely the view that Harper's mom (Jean Smart) expounds (in a remarkably ugly scene), and there's no denying that Wells has a potent subject here. But it's approached timidly. Wells seems to fear that if she really plunges into the tenderness of the relationship she'll seem to be condoning it. The relationship is reduced to musical montages, with Harper laughing and Connie gazing at her admiringly. Lovemaking scenes conveniently dissolve to afterglow. Wells doesn't seem to have the guts to explore the area where the erotic shades over into the creepy. When Connie masturbates Harper while calling her "my good girl" the camera discreetly pulls back and the scene fades to black.

A big part of why the relationship doesn't take hold is the casting of Rea. In his first scenes, Rea looks as if the role of aging boho bullshitter might bring out something in him. He's down-at-heel rakish in his first meeting with Harper (he's been hired to photograph her sister's wedding), offering her a sip from his flask or slyly honoring her request that he not take her picture. But it doesn't take Rea long to decide that he's more interested in extending his record for Longest Acting Career Sustained on One Expression, and he's back to his baggy-eyed, hangdog look. As written, Connie is a type, but an accurate one. He's one of those somewhat-talented, aging guys whose complaints about bourgeois society are cover for their inability to get off their duff and try to do something. They're freeloaders, boozers and womanizers with an eye for the young ones they can still impress.

But this type needs more flair -- and sharper cruelty -- than the lost-in-a-funk Rea can muster. He does so little layering that Connie's sudden explosions at Harper play more like jarring psychotic episodes than logical outbursts of his own resentment and failings. And the movie can't chart the blurring of that tricky line where Connie's attempt to spur Harper on to greater confidence in her own opinions becomes bullying.

One of the most cherished myths about movies is that things will get better for women when there are more female filmmakers. (Things get better for everybody when there are more good filmmakers.) You'd have a hard time proving that by Audrey Wells. In "Guinevere," as in her script for "The Truth About Cats and Dogs," Wells mines the comedy of female insecurity without being particularly sympathetic to women. "The Truth About Cats and Dogs" was some sort of landmark -- a "feminist" comedy that validated one of the worst sexist canards, namely that, in women, beauty and brains do not go hand in hand.

It's Smart as Harper's mom who gets the worst of the Audrey Wells treatment here. The character has been conceived as a sexually frustrated rich bitch, ridiculing her daughters, of whom she's plainly jealous, and verbally castrating any man unlucky enough to cross her path. Smart, who can be sharp, funny and sexy all at the same time, has been directed to play the character as the Pacific Heights version of blowzy. There always seems to be an appraising sneer waiting behind her perfect makeup, and her breasts always seem about to spill out of her shirt. But Wells' criticism of this character shows no sympathy for what's easy to sense behind it -- fear of aging and resentment that she may be losing her sexual attractiveness. She's simply the movie's shrew. (And one, incidentally, whose behavior seems to unwittingly validate Connie's rants against the ruling class, which, when he says it, are presented as evidence of his bull.)

Wells' moviemaking style pits the type of script where each nuance is carefully penciled in against an attempt at a loose, improvisational style. But she's too slick for the former and not disciplined enough to pull off the latter. The movie feels slack, unfocused (though to be fair, she does show some loose-limbed ability in the sequence of Harper's surprise 21st birthday party, and a later scene where all of Connie's "protegees" meet for dinner). And she overdoes everything having to do with Harper's insecurity. In the first scenes, as she makes her way among the guests at her sister's wedding, it took me a while to realize that the character was 20 instead of about 14.

Luckily, Wells has been smart enough to cast Polley, who assays Harper's awkwardness beautifully, although there are plenty of times when you really don't believe that anyone with Polley's swanlike neck and preternatural serenity could ever be awkward. But Polley glides gracefully through the moments Wells has directed her to overdo. She gives a thoroughly winning performance. There's a touching scene when she focuses on the gestures of a fellow bridesmaid at her sister's wedding, trying to mimic the girl's allure, completely blind to her own. Polley's best moments are the ones that are unself-consciously sensual, as when Connie tries to get to see what Harper's like when she's relaxed by telling her to lie down on his couch while doing long division in her head.

It's thanks to Polley's strong presence that the unequal power balance between Harper and Connie comes into view at all. Because, of course, unsure of herself though she is, subject to Connie's quicksilver berating, Harper holds the upper hand. The relationship she calls "my most spectacular and cherished fuck-up" is the one that alerts her to the perils of bathos and bull that artists are prone to; it's the formative experience you know she'll have no trouble moving beyond. This is Polley's first leading role (following her brilliant supporting performance in "The Sweet Hereafter" and wasted appearances in "Go" and "eXistenZ"). The pleasure of watching her is much like Connie's pleasure in watching Harper -- it's the joy of knowing she's got great things ahead of her.