For a Western woman, waiting on a rainy day at a matatu stand illuminates some inescapable truths. 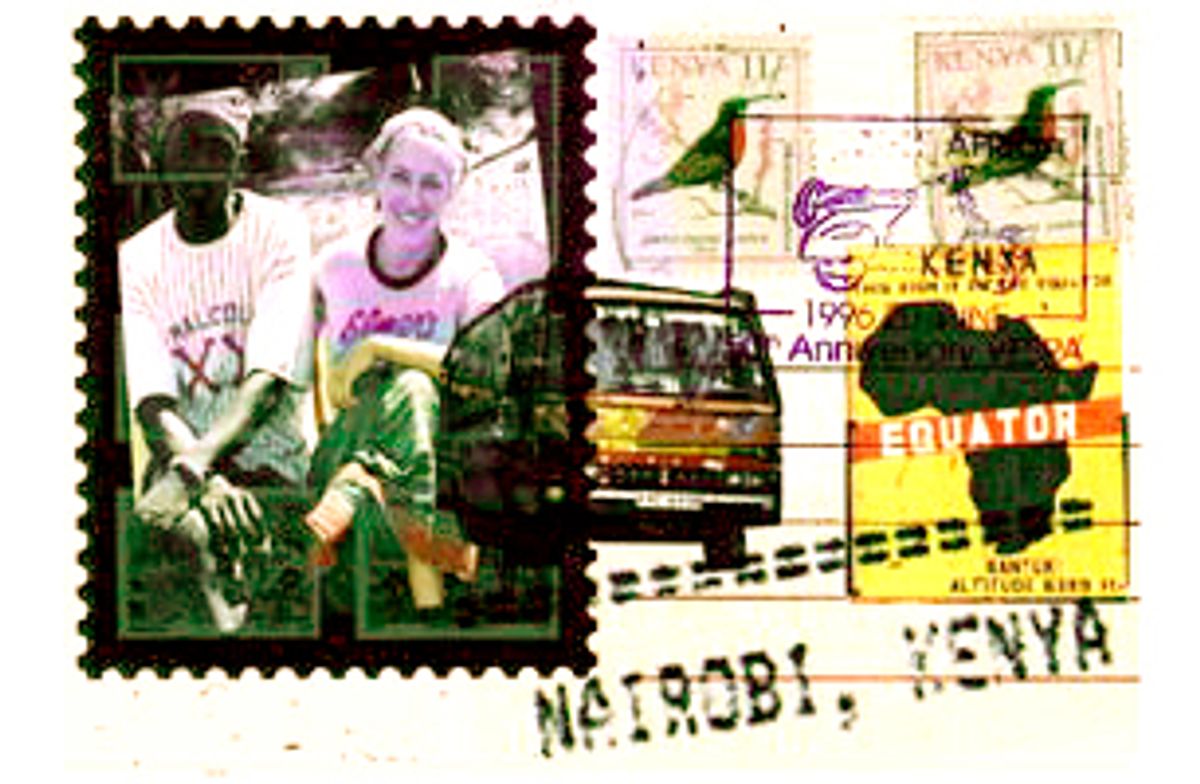 The puddle is formidable. I've already trekked a block to scout a crossing, and it's beginning to defeat the purpose. My shirt sticks to my back and the wet hems of my pants swat my bare ankles. Car horns, matatu music and vendors shout, a cacophony barely audible over the rain banging in my ears. I'm on the corner of Moi and Kenyatta avenues at 3:15 p.m. in the rainy season. Nairobi is at its crescendo.

I've been in Kenya long enough to know that the afternoon showers are one of only two things in Africa that are punctual. The other was not my lunch date. I had planned to be back at my hotel by the time the rain hit. It comes fast and hard, and smears the city gray. Dirt spreads from unfinished sidewalks and rivers run brown down the non-drained streets. As I try to navigate a way across the murky moats, I count unclogged drains as No. 23 of the things I take for granted back home.

Rain falls fat like the drips off awnings and I search for some temporary shelter.

The sidewalks are already crammed tight with those waiting the storm out under awnings. The women bright with their dark skin and deep colors. Lanky men in suits. Teenagers in jeans and American T-shirts. Either having adapted to Nairobi's overpopulation or never having a need for personal space in the first place, they press close. A woman's round hip hugs a businessman's thigh, a baggy-jeaned boy is squeezed tight to a grandmother's bags. I squish between an older man with a Chevron cap and an umbrella vendor. I pull my wet shirt loose, concerned it might betray the rectangular outline of my passport hidden in my bra. No. 24.

The older man smells like urine and body odor; his elbow is bony. The umbrella man courts me and other pedestrians with his song. "Umbrrrrelli! Umbrrrrelli! Shilingi kidogo, umbrrrelli." His rrr's are round and buttery, his lli's a click of the tongue; each of his words ends with a swing. I look at the striped umbrellas that look exactly like the umbrellas of the four other vendors on this block and the five on the block before this. He catches my glance and mistakes it for interest.

"Very good. Good price for pretty mazungu like you."

"Oh, you speak Swahili. Very good. Do you have a boyfriend?"

I flash him my brass fake engagement ring and push back farther into the group. I squeeze next to a young woman with straightened hair. My breast presses against her arm. I've grown accustomed to Kenyan men asking about my availability, but it still makes me feel shitty.

I stand there, wet and squished, listening to the rain pelt the city. Cars continue driving on the asphalt islands at freeway speeds, ignoring, as usual, any puddles or people. Horns wail over the rain, scolding those pedestrians bold enough to cross their route. The umbrelli hawkers croon and the muffled bass of music thumps not too far away. I still smell the older man and his scent mingles with the waft of curry from an Indian cafe around the corner.

On my left is a line of people waiting for a matatu. Privately run buses and minivans, matatus are Nairobi's most effective transportation system. In Swahili, matatu translates to "three people," and although that may be the number they were designed to carry, the drivers seem to interpret it as meaning three people per seat. Crammed tight, these matatus careen around Nairobi's roads, reading traffic signals as suggestions rather than orders and using their horns more than their brakes. If ever there were an antipode to Africans' great patience, it can surely be found behind the wheel of African cars. People who wait hours in lines and months for mail suddenly can't pause seconds for another car to pass.

The rumble of blaring speakers and vibrating metal alerts me to the arrival of a matatu. I can barely make out the familiar rap beat over the booming bass, the music hiked to a volume that neither the speakers nor the automobile were designed to withstand. Between the bass, potholes and lack of shocks, the matatu bounces down the road, catching as much air as it does asphalt. I stand back as the matatu swerves toward the curb. I am fortunate that I am shielded by a large woman who is less fortunate. Her generous hips catch the brunt of the puddle, her floral skirt made dark and muddy. The brightly painted matatu is similarly stained. Mud obscures the chartreuse paint job and splatters the steamed-up windows, plates of glass made pointless on each side. The driver leans on the horn and people scurry out of the small minivan. It is quickly reloaded and pushes its way back into traffic.

The rain lets up a little. Through the cars and crowds, I can just see across the street where two skittish tourists scurry to their destination. Costumed in their safari shorts and fanny packs, they act as if they are on the Serengeti, perked ears turning to every noise. A crippled man sitting on the corner with only one leg and a disfigured arm reaches out to them. His stump is visible through torn pants, the mangled arm curled in on itself. They stare and scoot away.

I look at the young woman beside me. Her lipstick is faded pink; her dark brown skin is flawless. I don't want her to think I am like the tourists. I push on them all of the assumptions I fight off myself. I am different. I have to convince her that I am the exception. The noise of the rain and horns and vendors is too loud; she cannot hear my silent pleas. What I am unable to say aloud, I try to say through body language. I make my shoulders loose and my arms limp. I let the crowd squeeze me like a rag doll, as if this will distinguish me from the tourists and make our common pigment less evident. As if my skin pressed against the black woman's arm will compel the colors to bleed, hers tinting mine just the least bit darker.

A small child wanders down the street. His dark skin is ashy and his gray ragged clothes look as if they were once bright colors. His eyes and stomach are large, his limbs small and snot gathers thick under his nose and runs down his chin. He spots me in the crowd. Evidently my body language is not quite the color camouflage I hoped it to be. One of his hands extends to me, palm up, while the other hand wraps tightly around a glue bottle. Sniffing glue is the drug of choice for Nairobi's street children. Cheap and quick, it numbs the hunger and deadens the minds of the children who use it. This boy looks about 4. I've seen younger.

He stands there for a while, head tilted up, demanding eye contact. I ignore him. After about a minute, he tugs on my wet shirt.

He remains where he is, hand still out, as I stare into the street. I may be accustomed to this, but I am not immune to it. I may look past the dirt, and weather, and noises, and crowds, and cripples, and smells, and stares, but I still see them. I may avoid those eyes pleading up at me, those eyes like a dog's at the dinner table, but I still feel them.

Beneath my slack shoulders and self-righteous denials, I know I am more like those crowding judgments and timid tourists than I am like the people I touch. I cling to trite distinctions for a sense of superiority and to validate my right to be here, but all it really does is make me another white who claims to be an exception, another arrogant American with a cool stance and slightly strutted walk.

The boy waits for me to change my mind. The crowd waits for the rain to stop. The pedestrians wait for the cars to stop. The vendors wait for anyone to buy. The cripple waits for one unhardened heart. Kenya waits for long-promised aid, health care, hope, justice. No, I will never be used to this. I do not have the patience. I am sick of waiting for the streets to drain and the lines to shorten and the phones to work and the water to be hot and the frustration to ease. I cannot wait anymore. I push my way past the boy and out of the crowd.

The matatu seems to have displaced some of the water in the curb and I renew my search for a crossing. I watch one man make a leap to the other side. His gray suit makes it across safely. I figure he has found a spot and follow his lead. The sensation of water splashing up my calves reminds me that his legs are longer than mine. Kenyans may be known for their running, but there is something to be said for their long-jumps too. My sandals squish with water as I run to safety on the other side of the street. Here, there are tin-roofed shacks where merchants peddle colorful kenga cloths and dubbed tapes. I dash past them, their stereos competing with the rain on their roofs, their bright reds and yellows struggling to be seen through the dust and mud.

Nairobi consumes my senses, each of its parts fighting for my attention. Its colors deafen and its streets bang in my head. I'm almost to my hotel, but for just a second, I stop. From here, the rain beating on the tin roofs sounds like a song. For just a second, all I can hear is steel drums celebrating the afternoon.