It must be time for another egomaniacal rat-patroller to pound his chest over yet another artist's filth-stained image of a religious icon. 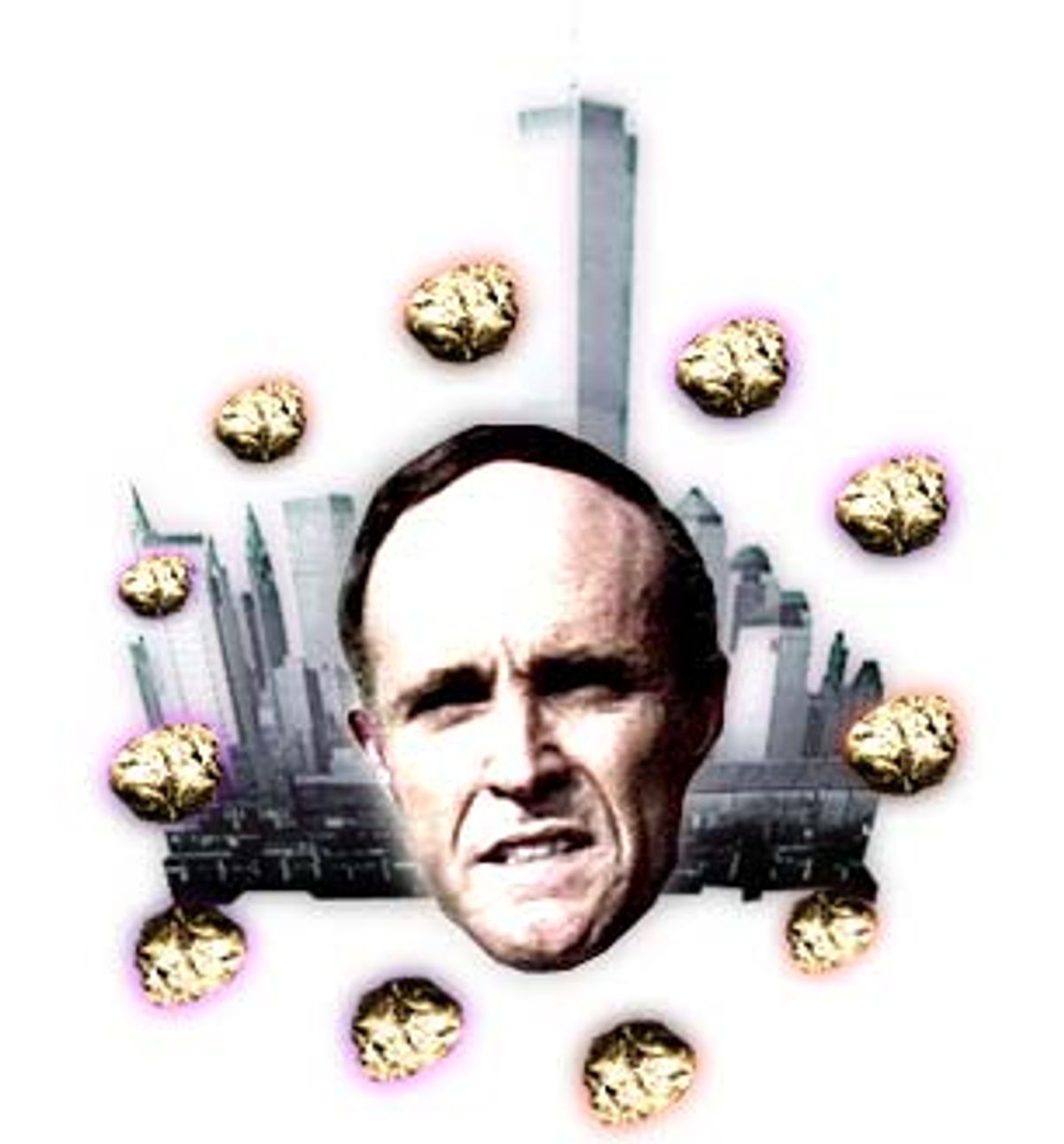 I was invited to the "Spin City" TV show party, ominously held in the 666 building at the Brooks Brothers store the other night in New York. When I got into the line I was flanked by TV women -- behind-the-scenes ones: wipers, fluffers, flossers. Anyway, they are very tall and expensive in their nipple-enhancing tube-dresses with pointy Manolo Blahnik shoes and good bone structure, and they are very fetching if you squint or don't get too close, but on closer inspection they all have the punchy, stress-fractured look of the Polish immigrant high-school girls in my neighborhood, who tend to have hard, permanent scowls and the type of deep, poisonous acne only caused by hours of rueful crying in secret and perhaps horrible sexual abuse.

To look at them, you'd think that TV women are as miserably oppressed by their professional status quo as any enclave of literate Afghan women living under the Taliban. As I was waiting at the velvet rope, I could see Michael J. Fox through the window in a rain of camera flash on some kind of podium, in a staggering dog-pile hug with many network Importantes.

The escalators were smotheringly packed into one big sweaty clog of suits, all, I learned later, craning for nearness to Heather Locklear. It became suddenly incredible to me that a huge conglomerate can decide that meaningless TV finger-puppets like Michael J. Fox and Heather Locklear are Important again, and suddenly, it's not just pop culture, it's actual CNN News. These recycled celebrities, the dregs clinging to the sides of the Fame Jar, can suddenly cause near riots with their deadly rays of commercially endorsed star-power again, after years of latency. Americans are easy corporate heathen, who, it is well-known, will practice wanton idolatry toward anyone Viacom tells them to, but it never fails to amaze me how indiscriminate they are.

It was during this reverie that the tiny pug-woman with the clipboard shrieked at me, "You didn't RSVP! It's not my problem that I don't have you on the list! You can't come in! I can't talk to you anymore!" her tiny row of razor teeth bared, raw hatred foaming on her upper lip. I ran away without protest to have a whiskey with Maxfield Parrish's Olde King Cole at the St. Regis. I didn't have the will to engage, she was way crazier than I was; in a tussle she would go straight for the eyes or carve nail-skids on my face and neck with no thought of jail or future ruin -- she was clearly deranged by high-viscosity, Hollywood death-lust.

Speaking of idolatry, it must be that time of the decade again; time for yet another squalling, Jesse-Helmsish, delusional, egomaniacal rat-patroller to pound his chest and thump his dick on the table over yet another artist's filth-stained religious icon in the art world.

The idiotically sensationalistic "Sensation" show scheduled to appear at the Brooklyn museum is at least now guaranteed to make one British artist an art star: Chris Ofili, the lucky guy who made the Virgin Mary collage with animal shit and pussy shots! He's having steak and champagne in jolly old England every night this week! Roit-Ho! His will be the blockbuster piece of the millennium, now that Mayor Rudy Giuliani has decided to pull all funding from the museum to appease his own hubris-rotted cop-brain and the hanky-snuffles of the archdiocese.

Remember the "Piss Christ" Serrano controversy? Well, that was years ago. Serrano is famous now, and part of the accepted canon. "Piss Christ" is ironically appearing in the second half of the "American Century" show at the Whitney, and nobody cares, but this new waste-covered icon is perhaps so moving and terrifyingly effective in its desecration of Roman Catholicism that the shrieking, bat shit-encrusted aboriginal tribe-elder Giuliani feels it is reason enough to fuck up an entire museum, forever. Ofili is probably going to send Giuliani long-stem roses and a big box of novelty chocolate penises and gleefully mention this retread controversy in every single piece of press material he has, forever. His Virgin Mary, formerly just a quasi-shocking in an '80s kind of way joke piece, will now sell for approximately 25 times what it was originally worth; he will now be the toast of the art world. He has "made it."

The real tragedy about the Giuliani "Sensation" controversy is that now this mostly stupid show will have to be taken seriously -- now we will have to decide that this hackneyed, adolescently shocking art-school mannequin wank is real "art" in order to preserve some semblance of the First Amendment. We'll have to defend it with the blood of our right young men in order to disallow Der Giuliani from arbitrarily and vaingloriously dictating what images New York is allowed to see. Now all culturites and good bohemian lefties will have to chain themselves to David Bowie's pet art show because Evil Stepdad wants to take it away; just like a tormented teenage daughter impulsively marries a loser boyfriend in a wet blur of mascara and harsh words.

The Clinton woman has got Giuliani politically afraid; now he's retreating into histrionic Idi Amin gestures of absolute cannibalistic control. Soon he'll pass a flag burning law; he'll have Wayne Newton performing in riot gear at fist-shaking rallies in clouds of tear-gas; he'll find and prosecute any tiny remaining cells of communism. There will be public Goth burnings in Washington Square park; police will break the thumbs of those who publicly spit or use the F-word. What Giuliani really seems to want is some kind of Emperor Tiberius-for-life status and is essentially catering to the very old, rich, God-and-nigger-fearing folk and putting New York under martial law until he gets it.

If I had a black son, I would chain him to the bathroom sink until this senate race blows over. Giuliani's combination of hubris and paranoia is a classic cocktail recipe for terror in the streets. A friend of mine is a black guy from the projects in the Bronx who works construction full time. This is a good guy -- an utterly reformed car thief who hasn't seen the inside of a cell for years. The only problem with him is he's very black and he wears gold jewelry and baggy clothes and he speaks with the accent and slang of a black person from the projects in the Bronx.

You wouldn't think these were good reasons for removing all of his civil liberties, but the other day he was drinking a beer in a paper bag on his stoop and a couple of New York's finest drove up and started yelling at him. He yelled back (it was, after all, his home), and they slammed him up against the car hood and took him to jail for three months on a wholly imaginary parole violation. It was a really shocking degree of harassment, but we were just happy the cops didn't shoot him. One friend commented that NATO really needs to come in and mediate between Giuliani and the African-American people.

Last week, a lovely, well-spoken, white girlfriend of mine with a good corporate job and an MFA was smoking a joint on the street with some friends. This, believe it or not, used to be perfectly OK in New York; the cops had better things to do, they would "not see" you. Everyone knew the pot laws were cryptic fiscal nonsense and the legal layover of assorted zealous right-wing anxieties, and the cops would mostly leave you alone, unless you were really obnoxious about it. Anyway, my friend was caught smoking pot. She was handcuffed, taken to the Tombs, strip-searched twice and left in a cell with no food but two apples, no water and no phone call for 18 hours. Since it is not actually legal for cops to take you to jail and detain you over less than half a joint, the charges were dropped, but this is apparently a new routine NYPD tactic -- you can't prosecute the police for misconduct unless you want to open your own case back up, which in today's ridiculously fundamentalist devil-purging atmosphere is tantamount to job suicide. It turns out that quite a few people in my extended social strata have had similar episodes.

It depresses me that the forces of Importance and Power in the world have utterly lost contact with any soul or resonance; the icon is worshipped above and instead of the Holy Idea, the tits are revered above and instead of the talent. I am so sick of America's weird, puritanical hypocrisy and the hysteria it generates. I am so sick of the corpse-sucking human voles that use this hysteria to get seats in the Senate.

Come see my Giuliani campaign poster -- it's like one of those billowing totalitarian Mao banners, but it's more like a Pietà, in that it is a bright, loving portrait of Rudy and his own mother, naked, and she is giving him what the shit-sex fetish underground refers to as a "Cleveland Steamer." It's art, baby. Real art.