In her fat new investigation of male malaise, Susan Faludi finds the culprit in the culture. 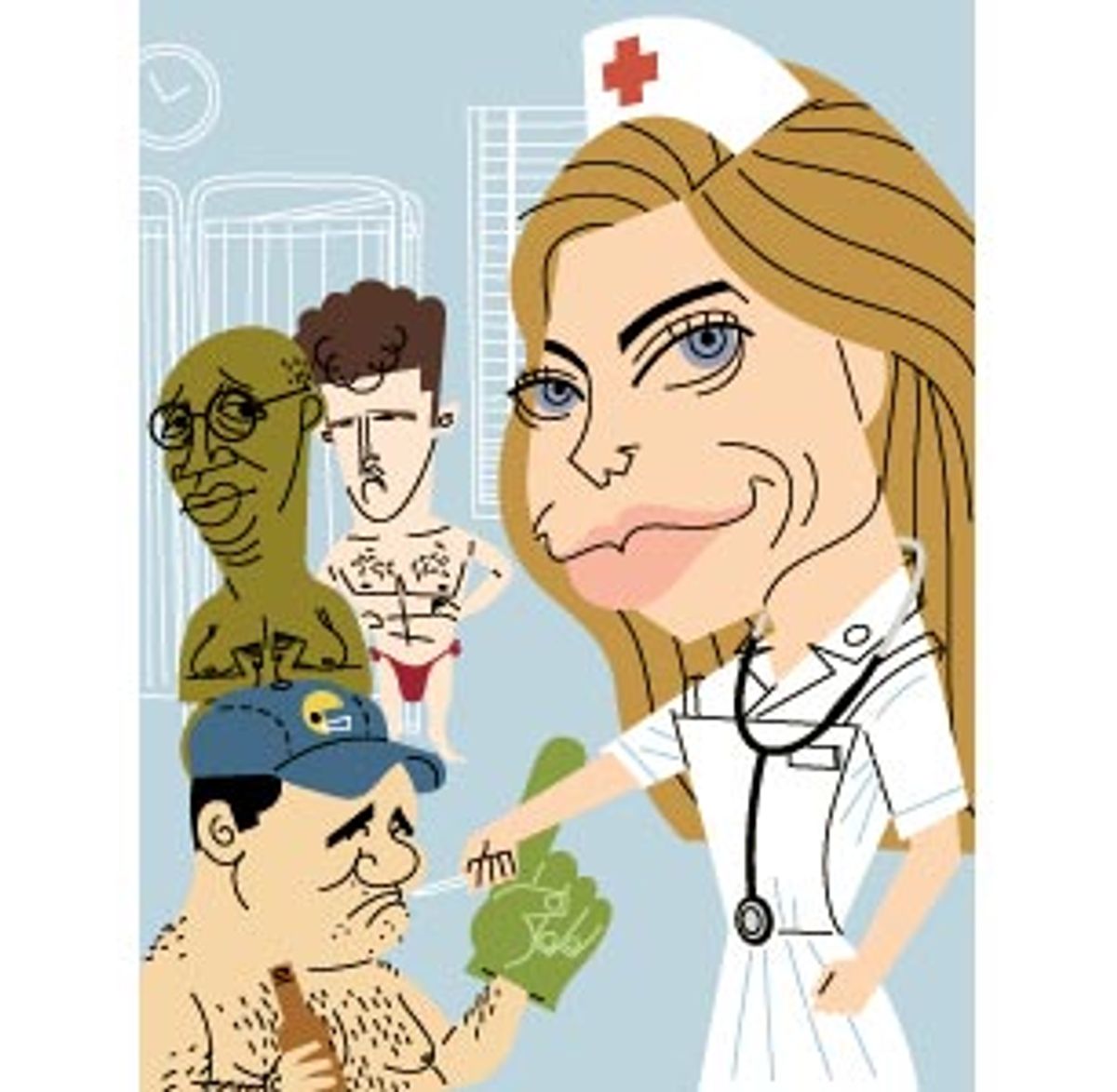 "I see Susan Faludi and I just want to punch her face in. Don't cut my dick off just because I'm a man," a young New Yorker named Gary Goldstein confessed to an Esquire writer several years ago, presumably bristling at the way the Pulitzer Prize-winning journalist had depicted the resisters of feminism in her megaselling "Backlash: The Undeclared War Against American Women." But take heart, Mr. Goldstein, wherever you are: Susan Faludi doesn't want to cut your dick off. In fact, she feels really bad about your dick (and we're speaking metaphorically here, you understand) because, apparently, while you stood braced through the '90s with your fists cocked, red-faced and ready to ward off any attack from Faludi and her banshee feminist ilk, somebody else cut your dick off.

But who? Ah, Mr. Goldstein, that's complicated. Still, you'll no doubt be happy to know that Susan Faludi (of all people) has provided you a far-ranging list of suspects in this, her second book, a walloping inquiry into the woes of modern manhood that looks poised to match the commercial and cultural success of her stellar debut. Among those Faludi hauls into her lineup: the faceless, grinding engines of corporate America; a not-so-Greatest Generation of tight-lipped fathers; a bungled, foggy-headed war in Southeast Asia; grabby NFL owners; corporate-style evangelism and Details magazine -- to name just a few. Confused, Mr. Goldstein? Of course you're confused. But then, that's nothing new, is it?

Faludi launches her coyly titled tome with a rock-hard premise: Something is wrong with men. To dispute that point, of course, would be to call down on your head a mammoth gush of evidentiary news clippings: rage-blinded shooting sprees, chest-beating retreats in the woods, Midwestern stadiums echoing with the twerpy sounds of weeping, vague-minded gatherings, et godawful cetera. Easy analysis of the situation has thus far yielded easy answers. One pinheaded theory dismisses men as atavistic brutes whose fluttering Y chromosome, whether obliged or resisted, leads them toward all manner of trouble. Another, just slightly more reasonable, blames feminism, which, in dethroning men (or attempting to), has left them a bunch of wobbly sad sacks, angry and uncertain about the new paradigm women are forcing upon them, and fearful, like Mr. Goldstein, that shiny knives are somewhere being sharpened.

Not so, Faludi maintains. Whatever's ailing men isn't a product of mere biology -- but neither does it stem from whatever ground feminists have gained. Instead, it's our very culture -- the giant, hazy, formless beast encompassing all those aforementioned suspects -- that's dealing men all the endless betrayals, losses and disillusionments that have incited them to shoot up day-care centers and file sniffling into stadiums. I suspect Faludi will glean all sorts of praise for this kinder, gentler and thus almost revolutionary theory of the gender divide -- for refusing to pin the blame for men's woes on men. And yet underlying this approach lies another, quieter evasion of blame. It's not your fault you feel like this, fellas, says Faludi -- but it's not our fault, either.

In addition, Faludi handpicked many of her interview subjects -- porn stars, over-the-top football fans, scraggly gun nuts -- from the farthest cultural shores. This tactic certainly has some merit, and Faludi defends herself admirably. (She quotes one interview subject as follows: "If you want to see what's happening in the stream called our society, go to the edges and look at what's happening there, and then you begin to have an understanding of what's going on in the middle.") But you can't help but finish several of her chapters wondering where the hell she ever found these colorful losers. (And permit me to add, in an effort to stave off the obvious rebuttal, that I'm writing this not from the gilded coasts of Los Angeles or New York but from the deep-flyover terrain of northern Mississippi.) Moreover, too many of her subjects seem thwarted by concerns not just masculine but human, such as marital crackups, job stress and obesity. Nonetheless: If these are missteps, they are noble missteps, evidence of Faludi's grand ambition to squeeze every last shred of modern male decay into her gentle but crumbly hypothesis.

And yet, for all my carping, there's a tremendous high point to Faludi's book, an analysis so perceptive -- and so fundamental to men's current squirming -- that it sings with a sort of sociological genius. "By century's end," Faludi writes, "the dictates of a consumer and media culture had trapped both men and women in a world in which top billing mattered more than building, in which representation trumped production, in which appearances were what counted." In other words, it's no longer enough just to be the kind of traditional Joe who works hard, raises a family and dies from eating too much butter. The stoical humility of the World War II generation drowned in a new ambition -- a hunger for stardom, for the role of the leading man.

It should come as no surprise that the first generation of men raised mostly by television sets is wracked with that hunger for stardom, or that it ushered a movie star into the White House. Life itself has become a sort of studio set. "Everything is a movie," Faludi quotes men's mag Details telling its readers in 1992. "Stage your own scene." The problem with this notion, of course, is that to live life as a movie is to live it in the third person. Every experience -- even that of war, as a number of Faludi's subjects attest -- has come to feel distant and secondhand. "This is real," a man remembers his stepfather looking up from the Burpee seed catalog and telling him. "The stuff you do is fake." It's no wonder so many men don't feel like men. They're only playing men.

This cinematic vanity is a corollary of the vacuous "ornamental culture" that, Faludi says, has nudged men atop a pedestal not so different from the one women found themselves perched upon in the '50s:

In a sense, the exploitation of what proto-feminist Betty Friedan called the "housewife market" has expanded, perhaps justly, into the male domain. Search the back pages of any men's magazine and you'll find a burst of glossy ads for hair-growth creams, penis enlargers, videotaped sex lessons: a host of bulletins alerting men to a sad litany of their flaws -- in the same way women are still badgered about, say, cellulite -- and offering quick, high-priced fixes. But then, truth to tell, one doesn't even need to turn the pages that far back; the features themselves reveal the shift in emphasis. In olden times, men's mags such as Esquire exhorted their audience to read more widely, to think more clearly, to be, above all, smarter. Nowadays, even New Man, the Promise Keepers' house organ, emblazons its covers with tag lines on the order of SPIRITUAL KEYS TO LOSING FAT. As Faludi writes,

The commercialized, ornamental "femininity" that the women's movement diagnosed now has men by the throat. Men and women both feel cheated of lives in which they might have contributed to a social world; men and women both feel pushed into roles that are about little more than displaying prettiness or prowess in the marketplace. Women were pushed first, but now their brothers have joined that same forced march.

What's ailing men, then, turns out to be not so different from what's ailing women: The culture has stripped too many of them of their depth and relegated them to the status of baubles. Ultimately, Faludi's dreamy prescription is for men and women to band together against the shadowy forces of culture, to create a new paradigm, to "act in the service of a brotherhood that includes us all." However valid and unimpeachable a solution this may be, it seems -- for the moment, anyway -- naively unrealistic, like a Hollywood ending. Gary Goldstein, after all, is out there somewhere, still waiting to throw a punch.