Why was she squeezing my nipples?

In Vietnam, a woman-to-woman massage can be a therapeutic experience -- and then sexual intrigue appears. 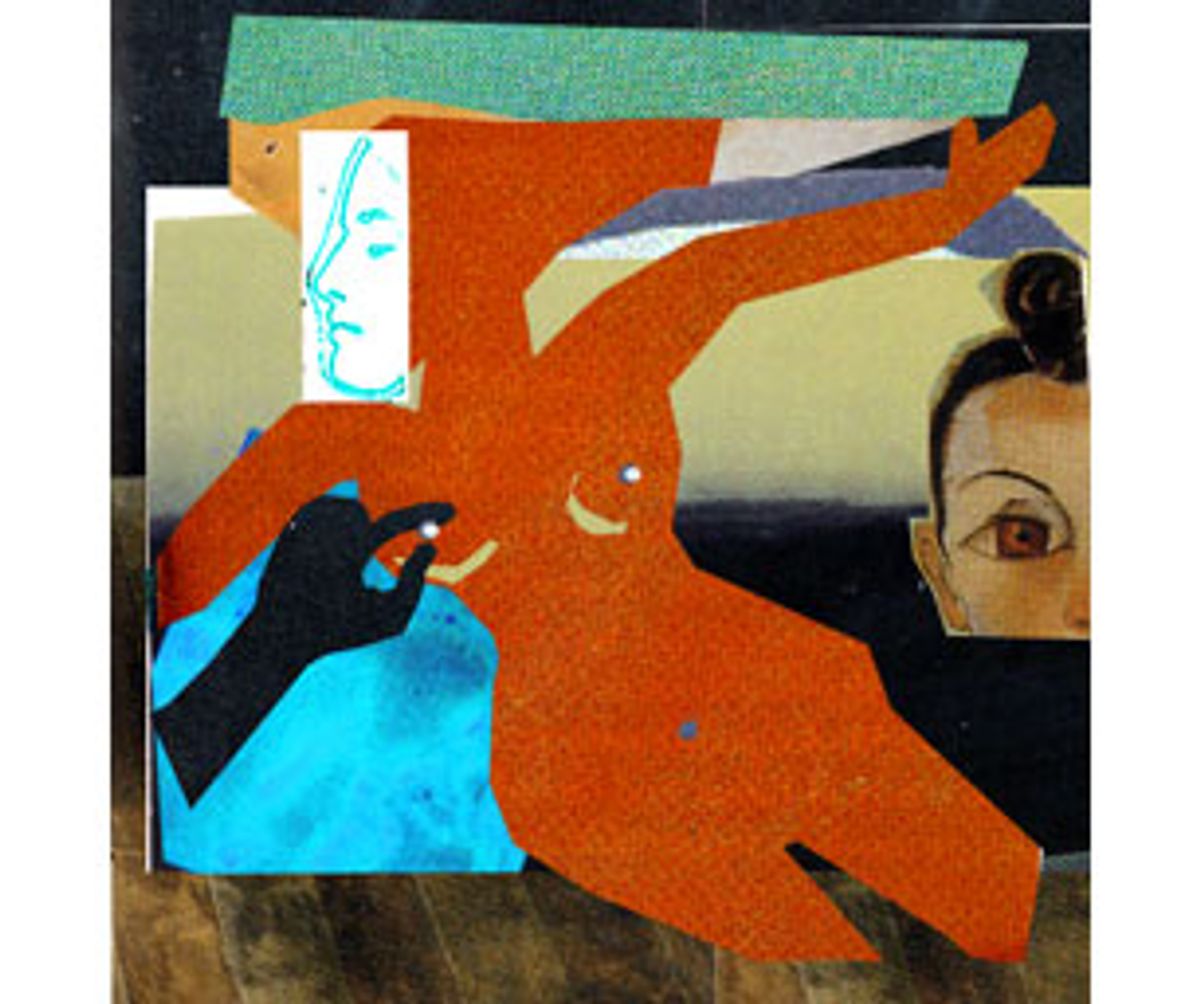 Haiphong is a port town close to Ha Long Bay, the panoramic setting of the movie "Indochine." Arriving early, I dropped my bags at the hotel and caught the hydrofoil out to Cat Bah Island at the far end of the harbor. The fragrance of bougainvillea trees wafted over the dock, mingling queasily with gasoline fumes from outboard motors. My guide Hu handed me an anti-nausea pill as we settled into the cracked vinyl seats aboard.

After an hour we reached Cat Bah, where we hopped a tiny craft that swooned off into the bay. Almost instantly I found myself in a mystical water-scape of emerald green, studded with limestone islets and otherworldly rock sculptures. Rocking lazily along, Hu and I were served a lunch of "freshly caught seafood," just like the tourist brochure promised. The brochure however made no mention of what transpired next: namely, myself perched over the side of the deck, disgorging both lunch and my previous night's dinner.

Nonetheless, it was mostly very pleasant, and after lilting serenely through the bay a while longer, we moored at a shell-strewn beach, and Hu and I went for a dip. After this we traipsed up a steep dirt path to a cave shrine on top of the hill, where there were some hidden buddhas Hu wanted to show me. "Leave guns and superstition outside," a sign admonished us at the cave mouth.

All in all, it had been an idyllic day, I reflected as we glided back towards Haiphong -- but not without its physical ardors. Back in the hotel, I decided that for the sake of my anthropological research and my screaming muscle fibers, it was time to sample the massage strokes of North Vietnam.

I'd always associated massages with socialites and wrestlers. A serious back injury several years ago, however, had prompted me to seek out this time-honored therapeutic art. Furthermore, my fairly frequent travels had provided me with opportunities to experience a variety of body-pummeling rituals in different cultures. From Budapest to Bangkok, skanky parlors to New Age temples, I've had my share of massages.

Since there were no spa facilities in the building, the massage was to take place in my room. This was a policy I'd often encountered. Minutes before the scheduled hour, I hastily puffed a cigarette in my pristine bathroom, undressed and swathed myself in the hotel bathrobe. I thought it best to spare myself the fuss of stripping in front of the practitioner when she arrived. Dimming the room light a couple of notches, I went over to the bedside TV and turned down the volume on the movie (alas, not "Indochine"). I wanted to approximate the tranquil conditions of a spa without playing up the intimacy of this as my sleeping quarters. It wasn't difficult to neutralize the space, carefully conformed to international standards of anonymity: beige walls, off-white carpeting and pallid watercolors. Cream curtains and air conditioning kept out the sound of rustling palm trees and whirring insects.

Soon there was a knock at the door and in walked the masseuse. She was about my age, wearing a pair of white shorts, a nervous grin and poorly permed shoulder-length hair. After a preliminary exchange (where I determined that her grasp of English was equal to my knowledge of Vietnamese) she disappeared into the bathroom. Walking over to the bed, I disrobed and lay face down on the ironed covers, completely naked. I mused momentarily about sheathing my behind with the robe, but thought better of it. No need for pretence, I concluded. No sooner had the thought passed than the masseuse approached with a starched white towel which she rolled up and placed under my throat. The ad hoc massage table and neck cradle having been arranged, she began operations.

Her technique was not particularly unusual or sensual, consisting of rather long rubbing strokes interspersed with deeper acupressure point probings. There were no oils, balms or aromatic scents, no whale tapes playing in the background. She spent quite a lot of time manipulating my gluteus (rather maximus), which I appreciated since it was extremely sore.

I was especially grateful since most Western massage therapists generally avoid this area, presumably for reasons of propriety. But we all know that there's nothing like some good bottom kneading to ease away one's existential pain. I was beginning to slip into a delicious alpha state, when suddenly a tap on the shoulder indicated to me that it was time to flip over. How different things were from the discreet New York ritual of therapist trailing towel over body like a toreador's cape, masking the turn and keeping the client's nudity intact.

While the massage had proceeded in somewhat of a regular fashion while I'd been lying face down, things began to get a bit odd when I turned over. I continued to keep my eyes shut, but sensing the woman's gaze on my face I looked up to find her smiling at me.

"Bootful," she mumbled, pointing at her eyes and then gesticulating towards mine.

I felt quite self-conscious all of a sudden, but thanked her for her compliment. Politely, I responded that she was beautiful, too, even though I found her mini-frame a bit too doll-like and her pinched features rather bland. She was nothing like the long-limbed, swan-necked Tongkinese graces that floated through the streets of Hanoi. At any rate, this little exchange seemed to have broken some discursive ground and she became quite chatty. Uncurling a tendril of my pubic hair, she remarked "no cut," which caused me a little embarrassment. I had been somewhat lackadaisical about my pruning and primping during my travels. What's more, I started to feel vaguely uncomfortable: It seemed like she was hovering over prohibited territories.

This perception of mine was intensified when she began gently prodding my stomach.

"No baby?" she inquired.

I confirmed her supposition. "You, baby?" I asked.

"How old?" I quizzed her, partly to distract myself from the pressure of her palms way down low on my abdomen. She lifted her hands and held up her 10 digits. Was it 10 years, 10 months or 10 days old? I wondered. I made several attempts to inquire whether she had a boy or a girl. I might have asked for cement-and-handkerchief soup: Each time, she shook her head uncomprehending. I left it there, unable to think of how to reformulate the question non-verbally without making a series of obscene gestures. I also didn't want to point to my exposed private parts in case of promoting any further misunderstanding.

Replacing her hands on my belly, she then arched forward and squeezed my left nipple.

Vietnamese is a tonal language, but I couldn't figure out her tone. After our brief but bizarre conversation, she resumed the massage. As she continued to stroke me, now luxuriously it seemed, I started to feel increasingly disturbed.

What had she meant by poking at my naughty bits, her flattery and unremitting stare? What was going on here? Was this some sort of not-so-subtle seduction routine? And if it was, should I, who had been unwillingly celibate for so long, leap on the opportunity as it were? No sooner had this idea flickered through my head than I became flushed with guilt. If I succumbed to what could very well be a come-on, wouldn't I be just one of the endless series of colonialist, foreign pigs who had ravaged this people?

At this point in my cogitations, she reached over and twisted my right nipple.

What the hell was she up to? Was she teasing me? Provoking me? Having fun with me? Making fun of me? Or was this second teat-tweak a cue? Should I reach out and clutch her wrist? Should I be complicitous? Should I stop her?

Fearing to meet her eyes, I closed mine even tighter and tried to sketch out a possible scenario. What if I clasped her hand and guided it purposefully down my body towards my well of loneliness. Would it be our little secret or would the whole hotel know the following day, and I be touted as a scummy empire builder? Or a lascivious dyke? What if I took her up on this possible pass and it wasn't one? Did I really need to go through the humiliating routine of causing offense and inviting rejection?

And what if she wanted it and I didn't? Candidly, I wasn't really aroused by her touch, nor did I find her that attractive. Could I reject her without her feeling that the West was once more disdaining her?

And what if she didn't really want me, but was under instructions from the hotel management to dole out special massages? Or was she simply trying to coerce a tip from me? These explanations may have made sense if I were a man -- but she was in a good position to see that I was not. And even if she had come across lesbian tourists before, how could she assume I was one? Unless she was herself?

Needless to say, by the time the session was over, I was more distracted and tense than when it had begun. Before concluding, she gave my nipples one more pinch, muttered something and then languorously stretched herself on the rumpled sheets. She twisted legs over body and, sleepily extending her arms way over her head, smiled. I hurriedly dressed and went over to my purse as she lounged away. I was very perplexed. The fact that she was now prone and wiggling on my sheets did nothing to diminish the ambiguity of the preceding events.

Finally and leisurely, and with apparent reluctance, she picked herself up off the bed. With a rapid murmur of thanks I offered her several colorful bills -- her fee and a tip. I walked her to the door, where we stood awkwardly for a couple of moments in mutual misunderstanding. As I turned the handle, we made our confused goodbyes. I closed the door trembling and slowly turned the lock.

Sitting down on the wrinkled bed, I grasped my cigarette pack and started going over and over things again in my head. Had I done the right thing or not -- whatever the "right thing" was or wasn't? What made my uncertainty even worse was the fact that as I sat there smoking anxiously, I could hear her shuffling around in the corridor outside! It seemed like she was talking to someone, though I couldn't be sure. All I knew for certain was that she hadn't really gone yet.

What in the name of Buddha was she still doing out there? It would have been too bold of her to knock, I thought. Was she dawdling in the hope that I would open the door and invite her in to stay the night? I didn't really want to sleep with her, but I also couldn't bear not knowing what her intentions were. In one desperate movement, I unlocked the door and jerked it open.

She was standing right outside.

I'm sure the French have a term for what occurred in the next tense moments, that exchange of quizzical looks, the not knowing, the weirdness. I tried to say something, but all that came out were garbled syllables. She in turn muttered an indecipherable sound. So excruciating was the tension, I thought I would faint. Someone right now was going to have to make a move ...

I looked away and shut the door.