Linux at the bat

Red Hat's Marc Ewing steps up to the plate against Microsoft in the billion-dollar free-software ballgame. 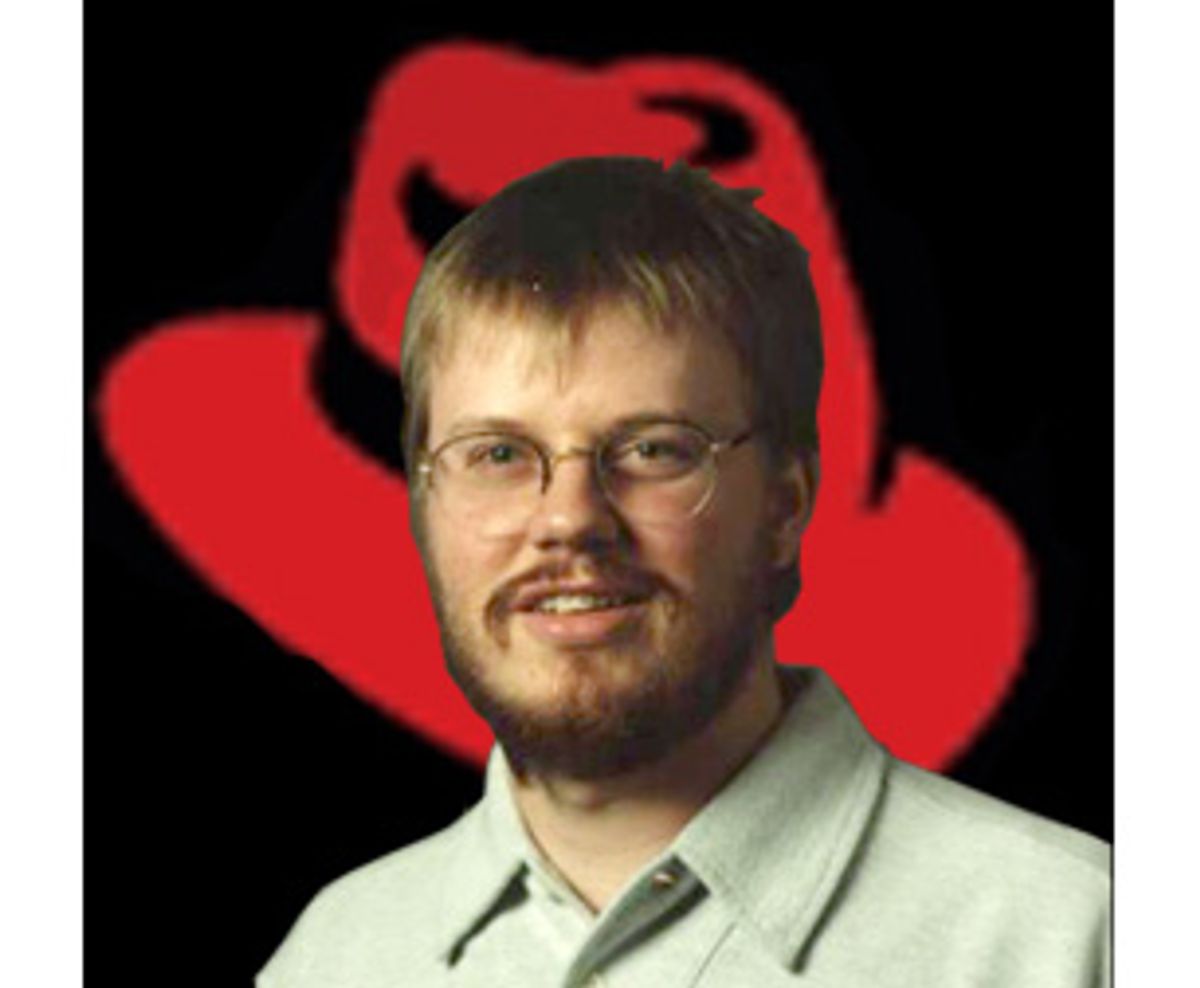 In December 1992, Marc Ewing graduated from Carnegie Mellon University and promptly founded a software company called Red Hat. In August 1999, Red Hat went public with spectacular success: As of late September, Red Hat's market capitalization was hovering around $6.5 billion. Not bad for a computer geek, even if such dormitory-halls-to-dumbfounding-riches stories seem commonplace in the late '90s.

But what makes Ewing's story all the more amazing is a little oddity about Red Hat that has turned the software industry upside down: Red Hat doesn't own its main product.

Red Hat sells distributions of the Linux-based operating system, a compendium of so-called free software that is protected by licenses requiring that the software's underlying source code be made freely available to all comers. Red Hat tweaks that software, burns it onto CD-ROMs, dresses it up nicely in slick packaging and offers various support services. But it doesn't own the software -- nobody does. If you want to get it yourself, you can download it free from the Red Hat Web site, or copy it from a friend. You can even copy it, change the name, and sell it yourself at whatever price you like.

No question, the Red Hat business model smells a little funny -- but so far Wall Street appears to be savoring the scent. In a summer marked by lackluster public offerings, Red Hat's blazed forth, setting a fine example for all the other fast-growing little companies that have homesteaded claims in the frenetic free-software gold rush. Everyone wants a piece of the Linux action -- but right now, Red Hat owns the No. 1 brand name in the business.

Shortly after Red Hat's emergence from its SEC-mandated "quiet period," Salon talked to Marc Ewing, now serving as Red Hat's chief technical officer, and asked him to let us know what it's like to be rocketing along the free-software roller coaster.

As of about five minutes ago, the Red Hat Wealth Monitor had your personal net worth pegged at $1,126,971,000. That's not too bad. [Note -- two weeks later, by the time this article was published, Ewing's worth had plummeted to a mere $800 million or so.]

How did all of this get started?

When I started Red Hat I wasn't really meaning to do anything with Linux. I was working on a rapid application development program that was going to run on Unix, but I didn't have any money to buy a Unix workstation at the time -- they cost something like $10,000. Then I happened to run across Linux, which was brand new at the time, and would run on my home PC, so I used that instead.

Over the next few months and early summer I discovered that I wasn't spending any time working on my project, I was spending all my time fixing Linux and getting it updated and making it easier for me to use. I eventually came to the realization that what I really ought to do was work on putting together a better Linux distribution. So that's what I did. I dropped my other project and started doing what I had been doing as a business.

How did you hook up with Bob Young, Red Hat's CEO?

I was working on Red Hat for about a year and a half before I released my first product, Red Hat Linux, in the fall of '94. At the time, Bob had a catalog company that was basically a distribution company from which you could order Unix- and Linux-related products. He bought something like 300 to 350 of the 500 copies that I was going to print. Quickly, over the next few months, we merged the two companies. Bob wanted to be more than just a distributor of products, he wanted to really have a company. His strength is in marketing and sales, and he wanted a product that he could help shape the vision for. He ended up doing all the business stuff that I didn't want to do and allowing me to just concentrate on the technology aspects, so it was a pretty good fit.

So if someone had come up to you at that point and said five years from now your personal net worth will be a billion dollars, what would you have said?

I never would have guessed it. When I first started Red Hat I didn't have very lofty goals. My aim was to keep enough money coming in so I could maintain my hacker lifestyle -- hacking on Linux in my spare bedroom. If I could just do that, and be able to eat, have a car, go to the movies, whatever, I'd be happy. I computed that I would only need to sell 1,500 copies every single year -- that's nothing! -- and I'd be able to support myself.

You and Bob Young ensured that everything that your own staff programmers have added to the free software code base is protected by the most stringent free software licenses -- something that not all of your competing distribution vendors do. Is that one of the ways you managed to promote your brand?

Absolutely. Absolutely. In the very early days, Bob and I would sit down for lunch and we'd have something that we'd developed, like a book, and we would wonder what should we do now, should we give it away, should we publish it, what kind of a license should it be under? But the classic entrepreneur is always a big risk-taker, and we were both classic entrepreneurs who like to take loony risks and hope they stick. So we always decided that we were doing something totally new here -- so let's just give it away. And every time we did this, we would just continue to do better, continue to strengthen the brand.

One of the underlying premises behind the open-source software development methodology is that it results in pragmatically better software -- that when a developer shares source code with the whole world, the software benefits from distributed bug testing and the ability to tap the resources of a worldwide community of programmers. When you were hacking Linux in your spare bedroom, how explicit in your own mind was this open-source ideology?

I think I knew it intuitively. But from a business point of view we were breaking new ground. Intuitively I knew, as a hacker coming from an academic background, and having worked in open-source software -- which at the time was called free software -- I knew it was just a vastly more efficient way and a more fulfilling way of doing software development.

I worked at IBM for two summers during school, and I had had the experience of coming across a problem while working on proprietary software, and of knowing that there would be 10 people out on the Net who would be happy to help me if only legally they could look at my code and they wouldn't get into trouble. It just seems so restrictive. It's very, very frustrating. With open-source software it's so great. If you need some advice, or you need somebody to look at some code and tell you why it isn't performing as well as it should, or what you are doing wrong, you'll get answers. It's a really efficient way of getting work done.

If you have 10 developers and you are a software company, there is just no way that you can cover with 10 developers the full breadth of software development knowledge that is out there, So by definition you are going to have pockets of things that those guys just don't know how to do, and they are either going to have to learn it, which takes a lot of time, or it may just never happen. Or they will try and learn it and end up doing it wrong and writing broken code. Whereas in an open-source environment, problems attract the people who are best suited to solve them.

There does, however, seem to be one big problem with basing your business model on free software -- your competitors can copy whatever you do, and undercut your price, completely legally. At LinuxWorld in August, an award for best Linux distribution was given to Linux Mandrake. I've been told that Mandrake is basically just a souped-up version of Red Hat. Is that true?

Right. It's Red Hat plus some stuff.

How did that make you feel? Your company spent a lot of money on the research and development that went into that distribution, and now somebody else is piggybacking on you and getting all the glory.

It doesn't necessarily bother us. Clearly if there were no other Linux distributors besides us and we had 100 percent of the market we'd be pretty happy. But in a sense the task is a lot larger than that, if you think about what the competition really is. The competition really is Windows NT. Every new Linux user that is out there, whether Red Hat sells to them or not, whether the distributor that sells to them has a product that is 99-percent Red Hat or not -- at least it's a Linux win, it's one less person going across the wall over to NT. Besides, everything that Mandrake adds is also freely distributable. If there are things in their product that we feel are of use that we would like to borrow, then we can.

You just mentioned that your competition is NT -- a year and a half ago, I interviewed Bob Young, and he was very careful to avoid setting up Red Hat as a competitor to Microsoft. But now you're getting quoted in the press saying that Microsoft is a major threat to Linux. What changed?

Early on we didn't want to talk about being a competitor for fear of raising the ire of Microsoft and having them come after us. So we didn't even bother comparing ourselves with NT because we didn't want them to come over and squash us. But all along we really were competing with them, and at this point, Microsoft has taken notice of Linux. We can't avoid it.

Sure. I would think so. Every sale that we make to somebody who decides to go for Linux over NT -- I imagine that would be something that Microsoft would be unhappy with.