Who wants to time-travel to 1357 France?

Michael Ovitz, onetime King of Hollywood, finds no takers for his new project -- a movie by Michael "Jurassic Park" Crichton. 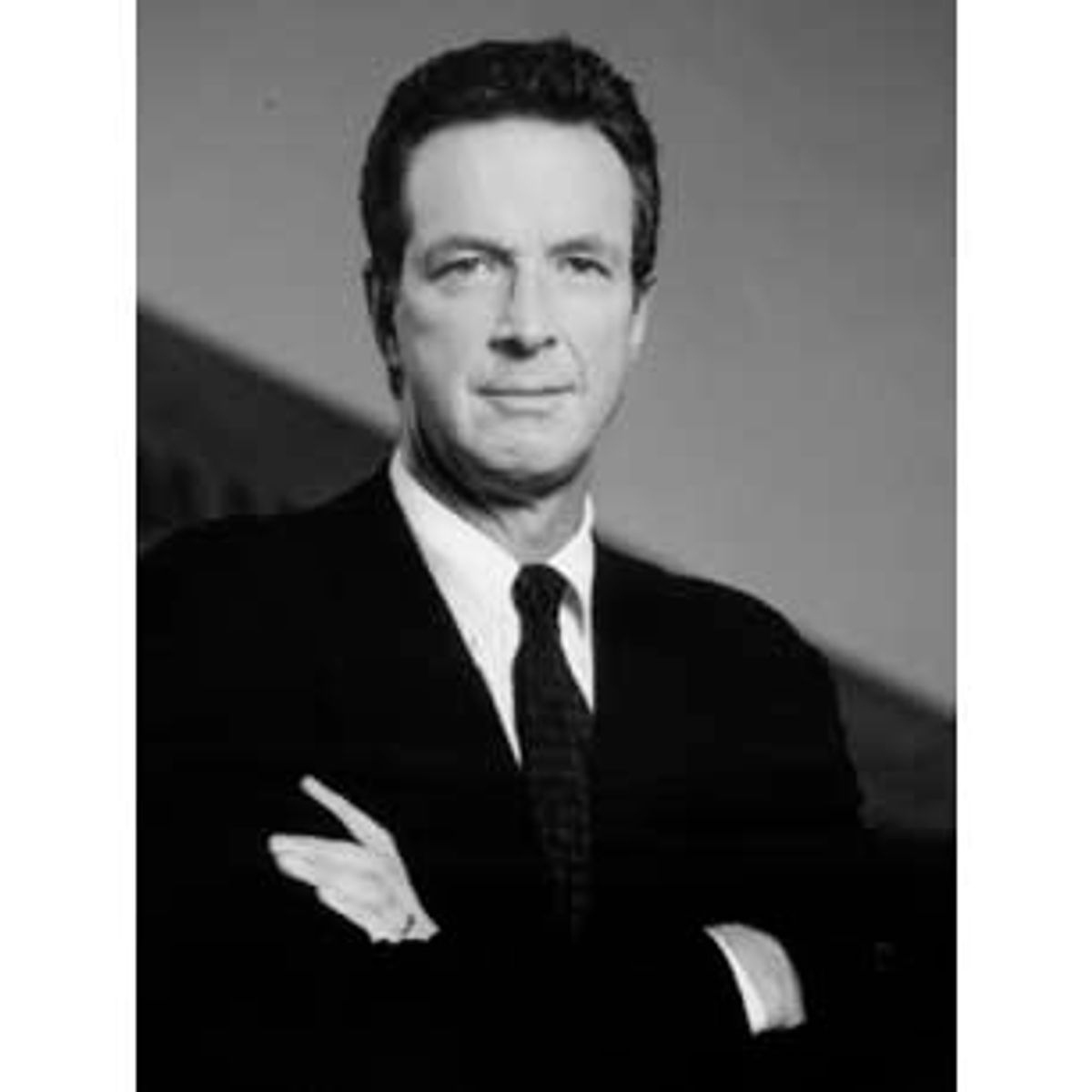 Take one bestselling novelist, his latest adventure-filled manuscript and his brand-new manager looking to regain lost status in Hollywood, and it should be a by-the-book formula for a successful movie. Instead, it has turned out to be a recipe for disaster for all involved. (And how come the movies coming out of Hollywood aren't as gripping as real life there?)

Informed sources reveal that Michael Crichton's just-finished manuscript, "Timeline," has been passed on by every major entertainment studio after it was submitted starting Sept. 24 with great pomp and circumstance by Crichton's brand-new manager, the former super-agent Michael Ovitz.

The crush of rejections by Disney, Fox, Paramount, Sony, Warner's and Universal is particularly embarrassing for Ovitz because this is the first Crichton novel Ovitz has circulated under the new relationship. Last month, Ovitz stole Crichton away from Creative Artists Agency, which had long represented the writer, and brought him over to his fledgling Artists Management Group. Increasing the humiliation is the fact that when Crichton was at CAA, all of his recent novels were immediately bought up by the studios and turned into big-budget films, often with big-name directors and big-salaried stars, including in recent years "Jurassic Park," "Sphere," "Congo," "Disclosure" and "Rising Sun."

Reliable sources also confirm that Ovitz is having trouble setting up another big-ticket, big-name project -- director Martin Scorsese's pet project about New York's Irish toughs, titled "Gangs of New York" and starring Leonardo DiCaprio. Yes, that's right -- King Leo! Ovitz's AMG represents both DiCaprio and ex-CAA client Scorsese, a duo heralded by the management company as the dream team to make the movie of the decade. So far, however, no major studio has shown more than a passing interest in the domestic rights to the expensive ($90 million-plus) project. (Disney only wants international.) And the murmuring is that the movie is in real danger of never getting a green light.

The big question making the rounds of Tinsel Town is: Who is to blame for these debacles? Crichton for writing a dud? Scorsese for coming up with yet another dark and violent plot? DiCaprio for squandering some of that post-Titanic star power? Or Ovitz, once the most feared man in Hollywood, for sowing so much ill will among studio executives for his past abuses of power that they're taking revenge on his AMG clients?

The odds-on favorite for bjte noir is Ovitz. (AMG did not return a request for comment by deadline.) Meanwhile, CAA agents have been enjoying Ovitz's and Crichton's and Scorsese's defeats in the movie marketplace. Not only were the agency partners blindsided by Crichton's and Scorsese's betrayals, but they also continue to be locked in a mano-a-mano battle with Ovitz to retain clients. Ovitz co-founded CAA and ran it until 1995 when he jumped to Disney to become president and sold the agency to its employees. Fired from the Magic Kingdom 14 months later, in 1998 Ovitz started AMG; for months now he has been slowly picking off those clients from his old agency with whom he had long and special relationships, including Robin Williams, Barry Levinson and Sydney Pollack, as well as Crichton and Scorsese, who was one of the first big names to split CAA for AMG.

In retaliation, CAA has declared publicly that it will not share clients with AMG, even though that's common practice among agents and managers, and accuses Ovitz's firm of acting more like a rival agency than a traditional management company. If Ovitz's AMG were an agency, it would become subject to Hollywood guild conflict-of-interest rules preventing it from finding work for its clients and also producing their projects. So far, at least, the guilds have not formally pressed the matter.

Further setting tongues wagging was the unorthodox way Ovitz submitted "Timeline" to Hollywood. First, in a deliberate breach of protocol, under tight wraps he showed the secret manuscript -- whose publisher, Knopf, is not slated to send it to bookstores until Nov. 16 -- to a handful of CAA's top directors, including Steven Spielberg, without going through the agency. Clearly, Ovitz was hoping one of them would become interested in the project, but they all passed. One CAA agent speculated that Ovitz was using Crichton's book as "bait" to try to sign more of CAA's high-end director clients.

Then, Ovitz breached protocol again in the way he sent the book to Hollywood studios. It's customary that when a major novel is going out to the majors for a first look, it goes out to all the majors at the same time. In this case, however, Ovitz did not submit the book to Universal on Sept. 24 when he presented it to the other entertainment giants. Only on Sept. 27, after word was received that deep-pocketed studios like Sony and Disney were rejecting the manuscript after a weekend's perusal, did Ovitz's AMG send over the novel to Universal -- a full three days after rival studios had received it.

On the surface, it seems bizarre that the studio home of Crichton's biggest money-maker ever, the "Jurassic Park" film series, would be left out of the process. One Universal production executive even went so far as to call up AMG to wonder why the submission was so late. (AMG didn't have a good answer.) But Universal executives, while livid, were hardly surprised by the slight.

The reason is rooted in Hollywood history. Back in 1995, Ovitz was negotiating with Universal's parent company boss, Seagram's CEO Edgar Bronfman Jr., to become chairman of the studio (then known as MCA). But when the bargaining broke down because of Ovitz's excessive demands, Bronfman hired Ovitz's CAA No. 2, Ron Meyer, to become Universal's president and COO, which left Ovitz out in the cold. It's a well-known fact in Hollywood that, ever since then, there has been no love lost between Ovitz and Bronfman or Meyer. "The last thing Ovitz would want is to give it to Ron or Edgar," one Universal executive explained. "Sure, Crichton gets screwed by it. But when has that ever been a problem for Ovitz?"

In the end, Universal, like the other majors, is deciding to pass on the project. "It sounds expensive and boring," one top suit at the studio muttered. "It'll end up a TV miniseries." (TV miniseries pay less for books than movies.) In fact, those who have read the Crichton manuscript admit that "Timeline," which is about a bratty tycoon who invents a time machine as the cornerstone of a chain of historically accurate amusement parks, then uses it to travel back to 1357 France, where he gets trapped -- may not be compelling subject matter for the movies. "The provocative thing about Crichton is that he's always able to tap into the Zeitgest of popular culture -- cloning, anti-Japanese sentiment, sexual harassment," one studio executive commented. "This book has none of that."

Several film executives who'd perused the manuscript also pointed out that the period nature of the book turned them off because it would cost a fortune to reconstruct the castles, armies and other accoutrements of medieval times. Besides, one movie wag snickered, "Do we really want to see a film filled with defrocked monks?"

Ovitz, no doubt, will take the Crichton book to second-level moviemakers before offering the project to the networks. It is almost inconceivable that a Crichton book would not be made into a movie (his previous book, "Airframe," represented by CAA, was sold immediately to Disney), but then again anything is possible during these belt-tightening times in Hollywood.

That also may be the fate of Scorsese's project. His movies have barely, or not even, made a profit in recent years. They also have been troubled by either controversial subject matter, like "Kundun," whose Tibetan theme angered Chinese officials who held up joint ventures with distributor Disney, or repetitive subject matter involving the Mafia or urban crime. In fact, at a recent media and industry pre-release screening of Scorsese's last film, "Bringing out the Dead," starring Nicolas Cage, at least four members of the audience walked out during the gritty film about a New York City ambulance driver having a nervous breakdown. The buzz on the movie prior to its opening this fall has ranged from lukewarm to terrible.

As for DiCaprio, he has become more known for his nightclubbing with pals than acting on screen post-"Titanic." The opening of his next movie, "The Beach," was just pushed back from Christmas 1999 to February 2000 by 20th Century Fox amid whispers that the film is disappointing.