Multimedia performance artist Laurie Anderson on Melville's Bible, the American art of the jump cut and why "Moby-Dick" still matters. 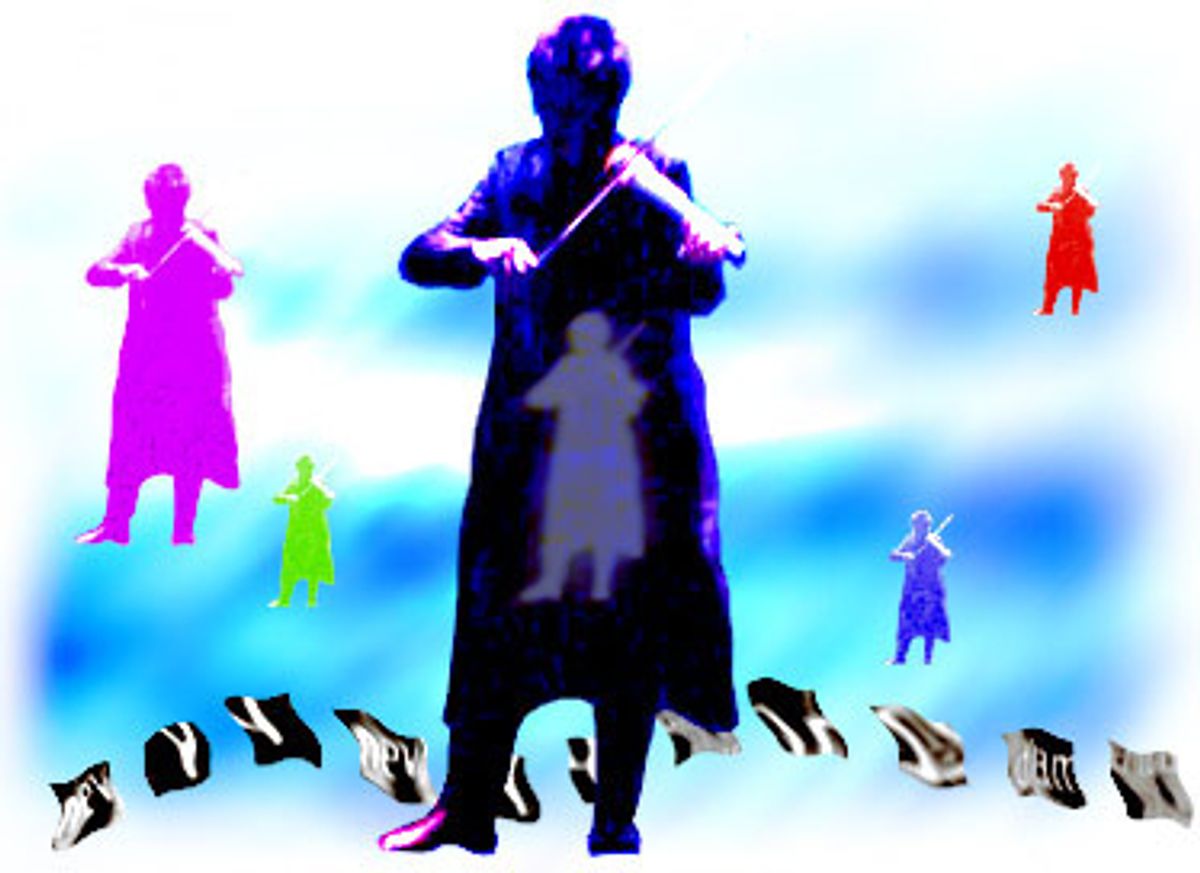 Herman Melville's "Moby-Dick" has inspired artists from Orson Welles to Richard Serra. So it's not surprising that
multimedia performance artist Laurie Anderson, who once said that her work dealt with the
"declamation of language," should also be drawn to the power and majesty of Melville's
magnum opus.

One would be hard-pressed to come up with a more incongruous image than that of the
spiky-haired Anderson, with her digitally processed vocals and synthesized violin, sitting in on Melville Society meetings dissecting chapters of this behemoth of a book.
But tackling major themes is nothing new to the keenly intellectual Anderson, whose "adaptation," "Songs and Stories From Moby Dick," premiered in Dallas last spring and is now the featured show opening the Brooklyn Academy of Music's renowned Next Wave Festival. Only partway through its national run, it is already considered by many to be Anderson's most ambitious and accomplished project to date.

"The hardest thing about this project is the almost crippling fear that I wasn't doing justice to a book that I loved," Anderson confesses from New York during a recent phone interview. "And I've never been in that situation -- I've always been writing my own stuff. So I really was afraid that I was distorting things -- and I'm sure I am, in the end. But hopefully the angle that I'm looking at is interesting."

The initial inspiration for the production came two years ago, when Anderson was one of several artists asked to create a monologue about their favorite books for a DVD project aimed at teenagers. "[The producer] was going to
have Spalding Gray do 'Catcher in the Rye,' and Robin Williams do a Dickens book, and Anna Deavere Smith was going to do 'Huckleberry Finn.' So I said I'd do 'Moby-Dick.'"

The then 50-year-old Anderson hadn't read the novel since high school, and remembered being bored by much of the whaling details and technical jargon. But when she read the book again, she says, she "fell in love with the language." The DVD project never panned out, but Anderson (forgive the pun) was hooked on the story. "I read it five more times in a row."

When Anderson told a friend about the project, he showed her a Bible that Melville
purchased just before he began writing his literary masterpiece. Many of Melville's original pencil notes had been erased by his wife, with whom he'd had a
less-than-perfect relationship. After an unsuccessful attempt to have the erased passages
reconstructed, Anderson pored over the pages herself with a magnifying glass, hoping to find the inspiration behind Melville's tale.

In Isaiah 27:1, she found what she'd been searching for: "In that day the Lord with his sore
and great and strong sword shall punish leviathan the piercing serpent, even leviathan that crooked serpent; and he shall slay the dragon that is in the sea." Next to the verse was a check mark and a long squiggle.

"I thought, 'That's it!'" Anderson recalls. "The whale is his snake and the ocean is his garden, the place where he works out good and evil."

That someone with such a decidedly 20th century sensibility could truly appreciate Melville's 19th century novel might be surprising to some. But Anderson's storytelling style is uncannily similar to Melville's -- associative, imagistic, anecdotal. And despite its many biblical references, "Moby-Dick" was quite progressive, even by today's standards; when it was first published in 1851, it was not greeted favorably. Taking issue with how the novel jumped around from idea to idea, critics called it an "absurd" and "inartistic" book, "as clumsy as it is ineffectual," the "eccentricity in its style and in its construction" akin to "having oil, mustard, vinegar and pepper served up as a dish." It was only
in the early part of this century that the book was rediscovered and hailed as a masterwork.

Anderson insists the story has as much, if not more, resonance today: "It's about
people working -- and that's pretty American. Another is that you're trapped on a ship with a captain who's out of his mind. And this is not an unfamiliar concept to Americans: The guy in charge is crazy, completely crazy. And
the third is that it's about something that you look for, that you're never going to find."

In the spirit of the Melville jump-cut, "Songs and Stories From Moby Dick" unfolds in a mosaic of words, music and images. The show -- which will be recorded as Anderson's first album for her new label, Nonesuch -- is a rather broad retelling of Melville's story, with only about 10 percent
of the text coming from the actual novel. Sometimes Anderson lifts whole passages from the book ("Seat thyself sultanically among the moons of Saturn ..."); sometimes she uses a single idea or phrase to build a song ("Because in all men there reside certain properties, occult and wondrous and hidden"); and sometimes she simply muses meditatively on her own.

"'Moby Dick' is a curiously silent book," she says in her notes to the show. "For every description of sound there are hundreds of visual descriptions. Instead, the music is all in the words and the way they riff and trip, skip and lumber."

In translating Melville's written language into a visual language, Anderson says she restricted herself to a few abstract ideas: words, water, flowing textures. "I do believe that there is such a thing as too much," she says. "So I've really tried to be careful about not trying to make a multimedia extravaganza, but to really feature the words."

Indeed, the stage in "Songs and Stories From Moby Dick" is awash in the printed word, with sections of Melville's text -- including some from his handwritten manuscript -- projected onto a giant screen behind Anderson and the other actors/singers at the rear of the stage. Then, suddenly, the image changes: Ocean waves crash against the shore; palm trees in Warhol colors blow in the breeze; a whale's skeleton, still, haunting, hovers in the air.

Wisely, Anderson never attempts to actually show Moby-Dick, realizing that the leviathan is better left to the imagination of the audience than to the set designer. Instead, she portrays the whale herself, using instruments
to give the creature the voice that Melville did not. "Melville was unaware that whales can talk and sing," says Anderson in the program notes. "He compared them to the 'tongueless crocodiles of the Nile,' and most of his descriptions of them are visual or spiritual."

The whale speaks through Anderson's trademark synthesized violin, as well as through her latest instrument invention, the "talking stick." Created with the aid of Interval Research in Palo Alto, Calif., the 6-foot-long talking stick is shaped like a harpoon and emits a variety of sounds -- including voices, percussion and, of course, whale sounds -- when stroked.

"The thing I love about it," Anderson says, "is that it's very musical. It's not like a lot of MIDI instruments where you just push a button and there's a sound. It's very physical, which I really like, because it's about getting away from typing. And it's just great fun to play."

Audiences at BAM will witness a somewhat shorter performance than those who saw earlier runs. "It's so frustrating, because really to do some of those characters, to tell some of their stories, it would have to be 50 hours long. But I'm trying to focus on really what the hunt was about, so this next version is much more streamlined."

So what are the aspects of "Moby-Dick" that most interest Anderson? "The fact that Melville was willing to ask really big questions, like 'What are you looking for?' and 'What do you want?' There are not many books that are that obsessive in that way. It's also the question that I think a lot of people are asking these days. Fortunately, Americans are naive enough to ask those sincerely. If you ask a French person why we live, they'll say, 'To drink wine, to eat cheese, to make love.' For Americans, I don't know if those are really answers. Maybe," she says with a laugh, "the wine just isn't as good here or something."

Anderson may not have had the opportunity to share her love of "Moby-Dick" with teenagers; but if nothing else, "Songs and Stories From Moby Dick" is getting some adults to take another look at this classic piece of American literature. "The most flattering thing that somebody has said about this," she says, "is, 'You know, after seeing the show, I went out and got the book. And thank you so much for reminding me how wild it is."