And now for something completely familiar 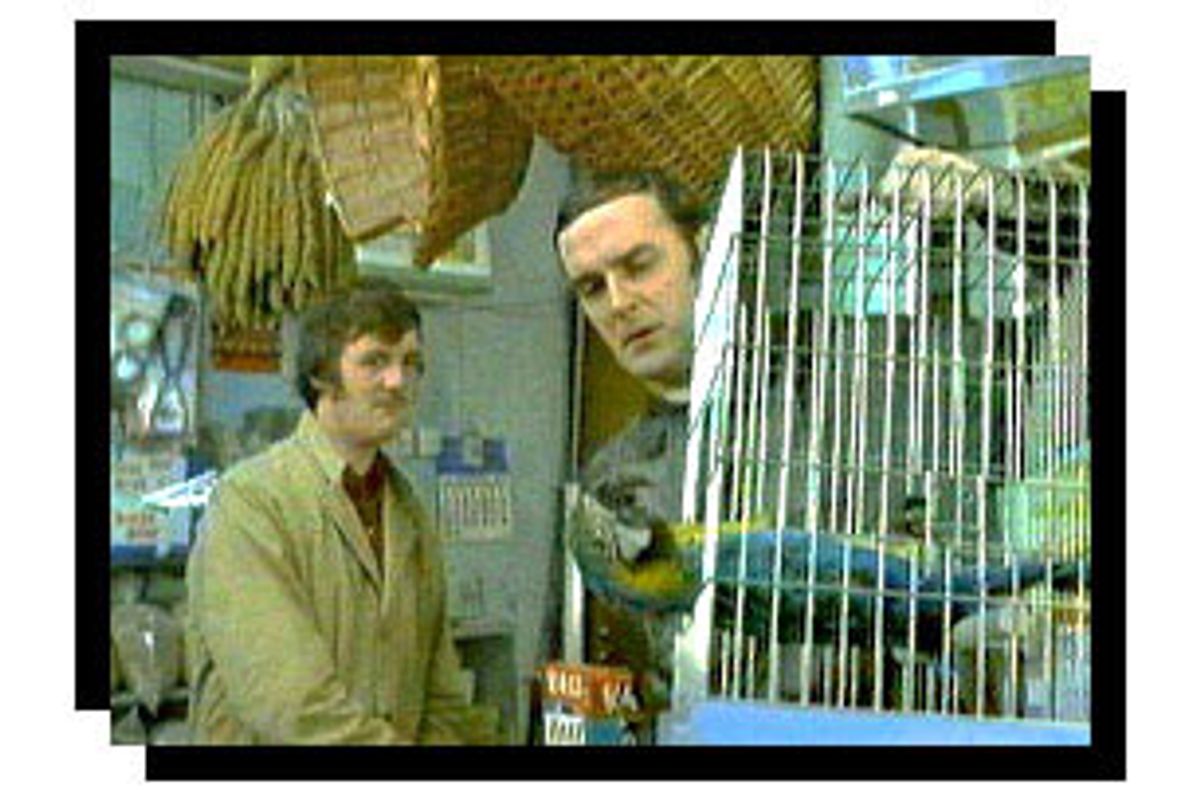 Study hall, a ghastly prep school down South, 1974. The monitor, a hirsute creep who teaches math, leaves us unattended for a few minutes to cop a feel from the history teacher, a Phyllis George lookalike we all fantasize about. Chip (there's always somebody named Chip in prep school) turns to Craig and asks if he caught Python on Sunday. "Say no more! A nod's as good as a wink to a blind bat!" Someone in the back row starts squawking. Not being in on the joke, I tug my forelock and humbly beseech Craig, mighty, pint-sized Craig, forecloser of widows and orphans, "What's Monty Python?" As if I had to ask. "It's crazy man, crazy. You'll never get it." Uh huh. The math geek returns suddenly, catching us in midair -- 100 lines of "I will not talk in study hall."

I tune in Sunday and see a homicidal barber become transformed into a lumber-jill: "I wish I'd been a girlie/Just like my dear papa!" Verrry interesting. I tune in next Sunday, and the next, and witness, in bizarre succession, a movie concessionaire hawking his one ware, a dead albatross; a restaurant sketch where a minor complaint about a dirty fork ends in a scene worthy of Greek tragedy via French farce; the great Scottish poet Ewan McTeagle, whose subject is money ("Can I have 50 pounds to mend the shed?"). A Godsend. Unlike anything else I've ever seen, with every stupid clichi and solemnity punctured. A breath of fresh air in suffocating Texas. Who says there isn't intelligent life on the boob tube? To paraphrase the Algonquin wit and playwright George S. Kaufman, satire is what closes Sunday night.

Word spreads and presently scores of maladjusted, smartass adolescents across the Dallas-Fort Worth area are in on our open secret. At my next, even ghastlier school, a miserable Catholic compound, lines and catch phrases from Python are like Masonic handshakes. ("It opens doors. I'm telling you.") My best friend and I crack up in soccer practice with impromptu Dirty Vicar gropings (he the Dirty Vicar, I the violated Carol Cleveland) or definitions from the Hungarian phrase book ("My nipples explode with delight!"). A clever boots in the lower grades is given to breaking into the Spam song at lunch, a musical interlude that uplifts our spirits and ever so briefly takes our minds off the soylent green plopped on our trays. Senior year, "Life of Brian" is the hot topic. It is made clear that those of us who -- heaven forfend! -- watch the damned thing are doomed to go to hell; I go to New York instead.

At art school and college I am finally comfortable enough with my social handicap to come out as a Python bore. And why not? They're everywhere. The Masonic handshake becomes a bone-crunching grip, lame silly walks are trotted out at the slightest hint, dead parrots are flogged unto oblivion. The Python litmus test no longer applies; you can hardly distinguish connoisseurs from maniacs, hepcats from squares, kosher from trafe.

By the early 1980s, Python is mainstream, even middlebrow. The savvy six who launched their U.S. invasion from the Sonys of north Texas -- Southern Anglophilia played its part ("I just luuuv their accents!") -- sweep the nation. The mendicants at PBS have a hit on their hands with a show that by the time it ended in 1974 was supposedly two or three years past its peak. Oh. Well. Never mind, as Gilda Radner's Emily Latella used to say.

Which brings up another pointed stick. The rise in surly, satirical North American comedy in the '70s is said by some to have been inspired by Python. And so it was -- and wasn't. On the face of it, Python's influence was purely formal, sanctioning silliness and organized disorder; anarchy in the USA, for the first time since Sid Caesar and "Your Show of Shows."

It was all right again for a skit not to have a beginning, a middle or an end -- or to have all three but not necessarily in that order. Yet unlike previous British invasions, theirs wasn't so much an invasion as it was a visitation from a tea-smoking transatlantic aunty, British cool as opposed to Yank and Skeetch edge. "SCTV" and "Saturday Night Live" owed considerably more to Mad and the National Lampoon (and to Lenny Bruce and Richard Pryor) than to the fag end of 1960s British satire. (Ernie Kovacs is another key, particularly for the Americans.) For despite Python's universal appeal -- the show even took off in that happy Heimat of thigh-slapping merry pranksters, the old West Germany (Bavarian TV commissioned three episodes of "Monty Python's Fliegender Zirkus" in the mid-1970s) -- their humor is uniquely British or, in that trite Little England phrase, quintessentially English.

That last revelation was sprung on me in the crush bar of the English National Opera by a woman who would not have looked out of place as a spectator at the Upperclass Twit of the Year Contest. We were there for the Jonathan Miller Mikado. Ordinarily, my bosom companion looked down her Elizabethan nose at Gilbert & Sullivan (she was the perfect Wagnerian), but she'd worked on the production when she was at the ENO and doted on Miller, a "Renaissance man." Moreover, she'd nearly crossed paths with Eric Idle, the original Ko-Ko, the biggest thrill of all. We raved about him and Python; "bloody geniuses." She then admitted that Python's success in America mystified her. "How can they understand it?" she asked.

I assumed this was the typical English crack about Americans being humorless or not understanding irony. It was that, partly, but more that Americans might not recognize the character types the Pythons portrayed to eerie perfection: Cleese's exasperating Mr Praline; Basil Fawlty's twisted cousin; Palin's pitiful Mr. Pewtey ("This is your moment Arthur Pewtey -- this is it Arthur Pewtey. At last you're a man!"); Chapman's fog-bound Colonel or his dubious judges; Idle's insinuating Nudge, Nudge or his dim, daft gels; the genteel bowler-hatted gents played by Jonesy; the Gumbys and the Pepperpots. (Rest assured, these people exist -- I've met them all, even Mr Pither, Palin's cycling fool.) Or that we might not see what's funny about class, or public school, or the welfare state, or Tories, or the BBC, or the army, or judges or policemen or drag (especially judges or policemen in drag). Yeah, all that goes over our heads.

Yet once entrenched over there a year later, I sensed what she meant -- everyday life in England can seem absurd and paradoxical, Magritte surreal if you will. (I mean that as a compliment.) Thesis writers stalking White City will drone on about Python being in the tradition of Peacock and Lear and Carroll and, well, Stoppard (he wishes he were half as good), or bang on Chaucer, Shakespeare and the University Wits. But, like most grinds, they'll miss the obvious and very mundane, quotidian nature of much of their humor: If you want a joke, look around you. They'll blow the dust off shelved music-hall routines, dredge up the Goons, deconstruct Footlights and Revue, disinter Peter Cook, go Beyond the Fringe, sit through countless episodes of "That Was the Week That Was" and other '60s TV shows, but will never meet a chartered accountant or drink Watney's Red Barrel (ugh!) or see Morris Dancing or be trapped into conversation by a trainspotter (hell, they are trainspotters). They'll never have the bureaucratic headache of having a gas cooker installed. They won't know what they're missing.

Enhanced hooey aside, my opinion of Python hasn't budged in these 25 years -- they're still bloody geniuses, the best sketch show there's ever been or likely to be. (The "British Fast Show," unknown here, is the best of the current crop.) Python is also better seen than read -- lots of fair-to-middling books out now ("The Complete Monty Python's Flying Circus: All the Words," in two volumes, is all you want) -- though seeing them is not as enjoyable anymore, what with the butchery A&E has wrought on them. Fortunately, the uncut shows and films are widely available on video. "The Meaning of Life," their true masterpiece, is a venomous, bitter gob that splatters every piety, socio-political and religious, I can think of.

Still, celebrating Python 25 later seems a bit naff (not at all fucking funny), not unlike superannuated boomers who strain their bypass stitches every time the Stones are wheeled onstage. (Can't get no! Can't get no! Satisfaction! Try Ex-Lax, guys.) Aside from the globe-trotting Palin, what have they done lately that can compare? "Fawlty Towers," "Ripping Yarns," "The Rutles: All You Need Is Cash" and "Time Bandits," were all long ago and far away. "Where does a dream begin?"

Our heroes are now merely going through the motions. After a string of successes in American movies, Cleese is waiting for that sealed envelope from Buckingham Palace; Sir John has such a nice ring to it, don't you think? (Turn it down, John! Hold out for that baronetcy that's yours for the asking!) Palin's next punt should be to outer space, first Python on the moon.

Jones will voyage across the pond to New Haven to be awarded an honorary degree in recognition of his contributions to Chaucer studies; maybe he'll teach there, a vast improvement for them. Idle, who isn't, will become a cricket announcer. Chapman's working his buns off in a series of afterlife "Carry On" comedies, joining Kenneth Williams, Sid James and the rest of the (non-living) crew. And Terry Gilliam, the lone Yank, will continue to let down the side, betraying the whole meaning of Python with his gargantuan Hollywood droppings.

I know what you're thinking, dear reader. I know what you want me to say, but I'm not going to say it. I wouldn't touch that Spanish Inquisition line with a Ten Pole Tudor. So push off.