Bandits strike a group of travelers in the wilds of a remote Indonesian island. 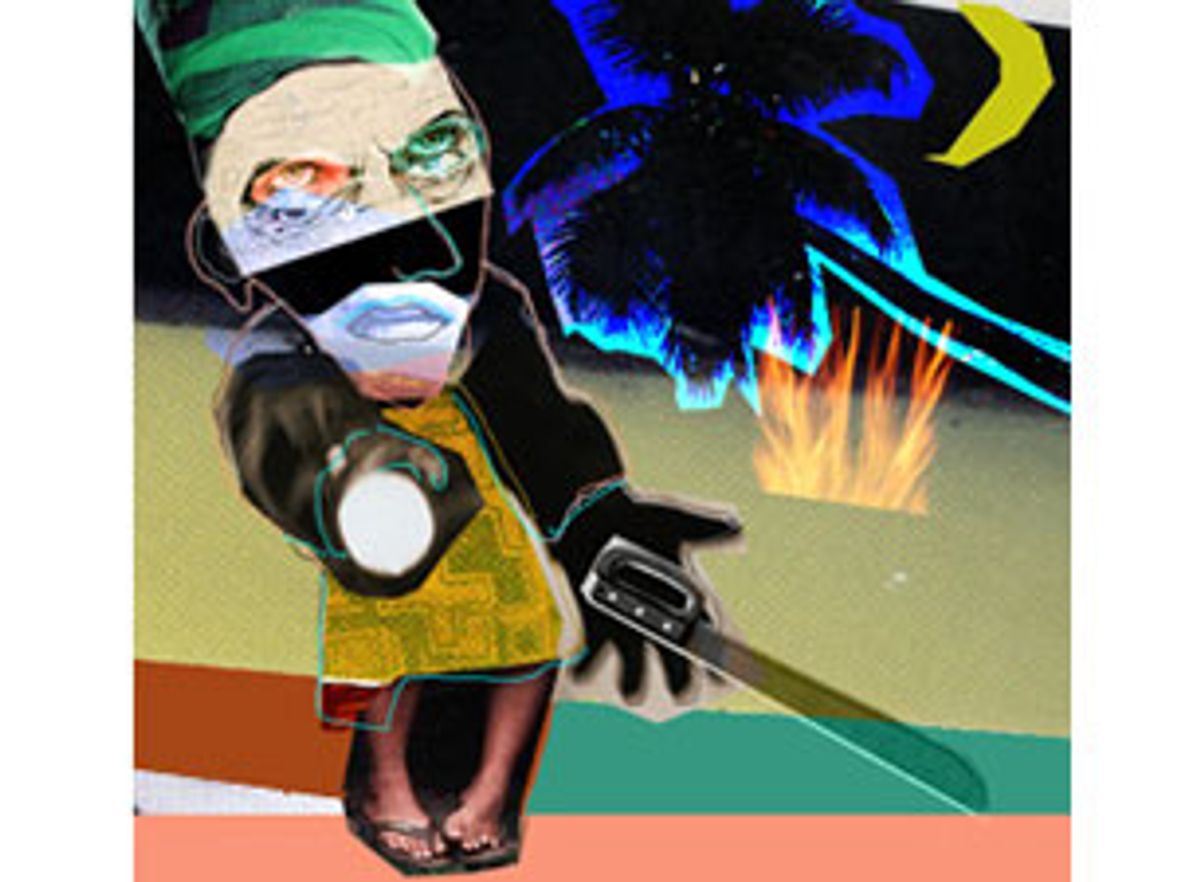 There may be a spot in Asia more remote than this lovely lake with the poetic name -- it means Child of the Sea -- but when six armed robbers raided our camp on the night of Sept. 9, we felt so isolated, so far from help, that we might as well have been on the moon.

Earlier that night, our group of three Americans and myself, a 40-year-old Canadian, had shared a campfire with the other trekkers in this distant corner of Indonesia -- five Germans, a Belgian and another American. We drank a few beers, talked and retired early. We were a tired group. That morning, we had climbed to the top of magnificent Mount Rinjani, rising at 2:30 a.m. and reaching the 3,730-meter summit at sunrise. That was followed by a bone-crunching 2,000-meter descent to Segara Anak Lake. Exhausted and happy, we soon fell asleep.

A couple hours later I heard shouting -- loud, threatening voices. I thought our porters were arguing, but it turned out to be six knife-wielding Sasaks (Lombok's main ethnic group), warning our porters not to interfere with the impending robbery. The intimidation worked -- all nine porters sat stone still for the next hour and a half.

The next few minutes were terrifying. I heard shouts from the tent of my hiking companions Chris Curran, 35, and his father, Bill, 61. "What the fuck is going on?" I heard Chris say, and then an alarming "Hey, hey, HEY!"

Robbery. Shit. I lunged for the tent door, filled with a sudden urge to be on my feet. "Brent, something's going on," said my traveling companion, 36-year-old photographer David Hartung, sitting up. His voice was quiet but alarmed.

At that moment a long machete slashed through our tent, inches from David's face. Again and again it plunged through the thin fabric. I dived for the exit and scrambled to my feet. "David, get out of the tent!" I shouted. The robbers surrounded me, shining flashlights in my eyes and pointing their knives at my chest.

I yelled for our guide. "Jagat! Jagat! Get out here. Jagat!" As Wira Jagat came blinking out of his tent, I lost my temper. Filled with anger at the thieves, I stepped forward. The biggest robber -- a mean, aggressive man of about 25 years -- kicked me in the stomach. I retreated, but remained furious.

Jagat began to plead with me. "Please, please. I beg you. I beg you." Bill, Chris and David joined the chorus, urging me to calm down. Finally some logic crept in: It's only money and hiking gear. Better to be calm and avoid injury, especially in a spot like this, where any wound would remain untreated for many hours. I looked at the star-spangled sky, the bright lake and the surrounding deep forest. "Jagat, how long until daylight?" I asked. "About four more hours," he said.

By now the robbers had all our gear on the grass, and were riffling through it. The four of us watched silently as they put our flashlights, cameras, watches and money into a plastic shopping bag.

Again and again they came over and searched us, pointing their knives. Twice I held my wallet in my left hand, over my head, while they checked my pockets, my crotch, my socks. Once I stood for a full 30 seconds, wallet in hand, while they shined a light in my face and we stared at each other. Finally, when they were absorbed in the looting, I stashed it under a rock.

Next the gang attacked two Germans, Andreas Spiegel, 32, and his girlfriend, Heike Schock, 30. Twice they stripped Heike naked, checking her bra and her panties, robbing her of earrings and necklace. There she stood, unclothed and shivering in the cold night, crying softly and filled with terror. This scene would later be repeated with the only other woman present, a 27-year-old German named Sylke Shirmer.

This was the darkest moment. The thieves found no money on Andreas and Heike, and they were in a bad mood. (Andreas wore a money belt, it turned out, which the bandits did not check.) Our group of four also had little money, having put it in a deposit box at the Senggigi Beach Hotel.

The angry robbers surrounded us and began to threaten us with their knives. The most aggressive one raised his machete over our heads, one by one, and yelled, "Dollars!" With Jagat translating, we explained: You already have all our money. The rest is at a hotel on Senggigi beach. We have no more money.

At long last, they stopped threatening us and attacked the tent of the other three Germans -- Shirmer, Holyer Zullchner, 37, and Martin Jacob, 25. The same scene was repeated: knives stabbed through their tents, flashlights in their faces, pockets checked, gear dragged out and plundered. We heard Sylke pleading for the thieves not to take her shoes. "Please. Please. It's the only pair I have."

Last they robbed Gary Ford, a 26-year-old American, and David Blonde, a 25-year-old Belgian. Ford's reaction was similar to mine: He was furious. As he argued with the desperate bandits, I could clearly see the foolishness of his actions (and mine).

Had the attack ended quickly, it would have been merely scary. But as it dragged on, the situation settled down somewhat. Bill, who has traveled widely in Mexico, South America, Asia and elsewhere, was the first to understand that their intentions were not violent. "I realized that like most criminals, they were young and dumb, and it was just a matter of doing what they wanted," he said. "They didn't make us kneel down, or line us up, or put knives to our throats, or any of that."

As we began to observe our attackers, the robbery acquired a tone of tense black humor. One of the thieves yanked the comb from Bill's pocket and held it up suspiciously. "What's this?" he shouted, in English. "It's a comb," said Bill, providing a helpful hair-combing pantomime.

Another thief found time to deliver an anti-drug lecture. Ripping open a pack of Drum tobacco, he sniffed suspiciously. "Ganja!" he shouted. "No, no," I said. "Tobacco. Tabac." Brandishing his machete, he flung the tobacco on the ground and yelled, in English, "No ganja on Lombok!"

They were picky about their pilfered food. They liked the Taiwanese peanuts and the local bananas, but the raisins met with disapproval. Tearing the box open with his teeth, one of the robbers shoved a fistful into his mouth. Pah! He spat them out and threw the pack on the ground in utter disgust, glaring at David.

The littlest thief puzzled for a long time over Bill's saccharine tablets. He held the container to his ear, shook it, looked at it, shook it again and looked again. In the end, the child-proof cap defeated him. He took the tablets anyway.

The meanest thief -- the man who kicked me, and raised his machete over each of our heads -- stalked about in white underwear, a filthy T-shirt and Bill's wool socks. It's true -- we were robbed by a thug in underwear. At one point the man in underwear asked us if we had any checks. Sure, we joked later: Who should I make it out to?

Finally, after about an hour and a half, they melted into the forest and disappeared, carrying a sack full of cameras, lenses, cash, watches, flashlights, jewelry, socks, shorts, pills and even a bar of soap, which they sorely needed.

They left behind David's exposed film, and Sylke's only pair of shoes, and they left the passports and plane tickets belonging to the three Germans. Bill's watch, a cheap Casio that he has owned for more than a decade, didn't meet their standards.

We threw some wood on the fire and talked. The Belgian, David Blonde, had taped his money to the inside of his backpack, and Andreas had the money belt. The rest were not so lucky. Martin, Sylke and Holyer had lost all their cash: $200 U.S. and 300 deutsche mark. Jagat, his police radio gone, immediately sent four porters to the tiny village of Senaru to notify the police.

The next morning, as we hiked out of the crater and down the volcano to Senaru, a tough 12-hour slog, we had time to reflect. Was the robbery related to the rising tide of violence in Indonesia? Maybe. I had hiked this route in March 1998, when the country was ruled by Suharto, and there were no reports of violence. Our robbery, said Jagat, was already the third this summer.

Will the robbers be caught? Again, maybe. Jagat believes they are from southern Lombok. As they drift through the tiny mountain villages back to their homes, their accents will mark them as strangers. Every item they stole, from David's $1,300 Canon camera body and $1,400 lens down to the flashlights, foreign watches and Swiss Army knives, will identify them as thieves.

When we reached Senaru after dark, the police were already mobilizing: 50 of them, mostly teenagers. The police chief, Lilik Putranto, was in a state of high excitement. He shook our hands, one by one. "I myself am going to the mountain tonight," he said. "Tonight!"

If the criminals are caught, they'll find themselves in a world of hurt. After the previous robbery, we were told, at least one suspect had been beaten to death.

Wira Jagat, our 23-year-old guide, was deeply affected by the robbery. On our way into the crater, he had been an energetic kid, full of life and busy learning new English swear words. On the way back out, he lagged far behind, limping and disillusioned. The robbery seemed to take away his spirit.

Certainly, it changed his career path. Never again, he said, will he guide visitors to Rinjani. Instead he will become an English teacher. He already has a good vocabulary. The day after the robbery, when I asked him how he was doing, he replied: "I am traumatized."

The rest of us were not so despondent. Nobody had been hurt, and we even began to enjoy the freedom that accompanies temporary absolute poverty: It didn't matter who handled our bags -- porters, bellboys, taxi drivers, etc. -- because they were completely worthless.

With the exception of David, who must replace $4,000 worth of photography gear, our losses were modest. "In the end, none of it matters," said Bill. "It's all just stuff."

It matters more to the guides and porters and tour agencies, who make a tough but honest living leading trekkers up and down the rugged, beautiful volcano. While we return home, safely out of harm's way, all they can do is hope that the robberies end, and peace returns to Lombok.

Brent Hannon is a writer who lives in Taiwan.