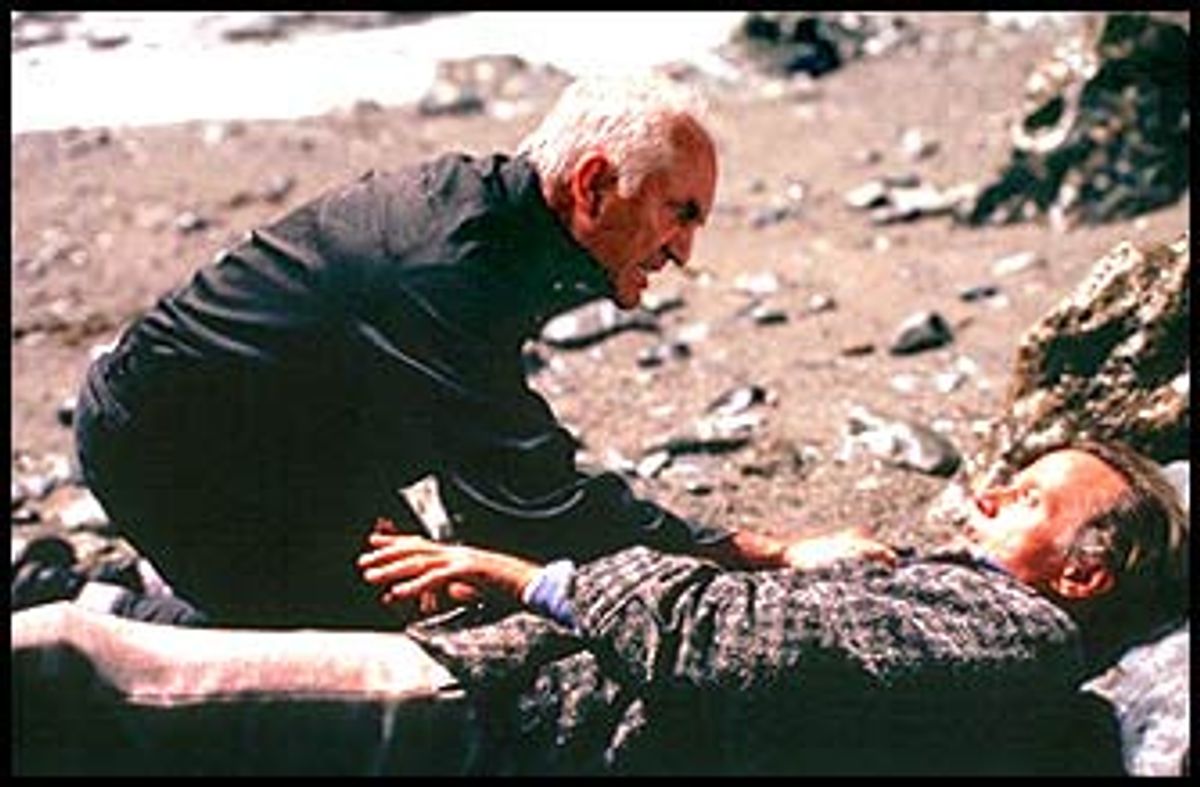 Over and over in "The Limey," director Steven Soderbergh cuts to a shot of his hero, Wilson (Terence Stamp), on board a commercial airline flight. The more you see it, the less you're sure whether Wilson is coming or going. And watching him move deliberately, unstoppably through Los Angeles, stalking the man he's sure is responsible for his daughter's death, you get the sense he hasn't even landed. "The Limey" progresses from cheap motels, run-down neighborhoods and warehouses plunked down in no-man's downtown to the posh homes of the Hollywood Hills and up to Big Sur. And Wilson moves through them all like a cross between Lee Marvin in "Point Blank" and David Bowie in "The Man Who Fell to Earth." Stamp is the alien (in both senses of the word) as revenge machine, a sinister avenging angel, slumming through the city's scuzz, both high and low, while holding himself apart.

It's "Point Blank" that hovers over "The Limey." In John Boorman's 1967 film, Lee Marvin rises (seemingly from the dead) to exact vengeance from the wife and best friend who betrayed him. Marvin finds that the forces he's set out to destroy have been manipulating him all along. The controlling forces that Wilson faces down at the end of "The Limey" turn out to be far more personal.

Like "Point Blank," "The Limey" is an art noir that courts pretension but just manages to keep from succumbing to it. It relies on a tricky, fractured editing scheme (by Sarah Flack) that jumps between past, present and future, and from location to location. A scene might be interrupted by quicksilver flash-forwards to its conclusion. It's like entering a room and finding the wall decorated with shards of mirrored glass that allow you to glimpse what will happen five minutes from now.

The plot is less engaging (for most of the movie, we're not even sure that Wilson's daughter Jenny didn't die in the car wreck her death has been blamed on) than the macho fantasy of the tough guy who's not about to take any guff. That fantasy is, of course, a load of macho bull, as Jenny's acting teacher (Lesley Ann Warren, making one of her far too infrequent movie appearances) tells Wilson. But the movie has no time for her complaint -- or her character -- because the fantasy itself is the essence of its appeal.

At times "The Limey" feels like a party thrown for noir buffs and arty film types. You can slump down in your seat and groove to Wilson's no-nonsense mission of mayhem or to Soderbergh's modernist diddling. In some ways the structure, which turns the machismo into pulp existentialism, is a means of disguising just how conventional the movie is. But it also results in genre scenes that are unlike any others, like a car chase shot so closely that the vehicles seem to be crunching metal only a few inches in front of us. Or the scene where Wilson coolly dispatches the thugs who have beaten him up and insulted his dead daughter's memory, shot from such a distance so that all we see are the flashes of Wilson's gun.

"The Limey" doesn't go very deep, but sometimes there's pleasure to be had in enjoying a movie with a hero who's a bit of a bastard. And "The Limey" has been made by people who are too smart to turn Wilson into an Eastwood-style automaton, or to use the noir conventions as bloody deadpan nihilism -- as in the manner of all the Taranteenies who've embraced the genre as a means of showing how hip they are. Besides, with Terence Stamp in the lead, it's virtually impossible for the picture not to have an edge of humanity.

Stamp is used less as an actor here than as an icon of '60s British cool, invoking the hipness he had starring in pictures like "Billy Budd" (1962), "The Collector" (1965) and "Far From the Madding Crowd" (1967). Playing the cockney badass with the L.A. thugs he sets out to intimidate, Wilson uses his rhyming slang and false cheeriness like the deadliest of put-on artists. But Stamp's best moments are when he's by himself, sitting in his motel room brooding over his daughter, who was lost to him even before her death. The irony of the role is that the very qualities he's using to track down his daughter's killer are the same ones that drove her away before he went into jail (which is where he was when he got the news about her).

Soderbergh has hit upon the simple and ingenious device of including clips from Ken Loach's 1967 film "Poor Cow" (in which Stamp played a thief named Wilson) to stand in for Wilson's memories of his broken marriage and his dead daughter's childhood. Flashes of Wilson's happier past are up on the screen right next to our memories of Stamp as a gorgeous, charismatic young actor. That could be a cruel device if Stamp hadn't aged better than any man in the movies. He's one of those rare stars who's gotten better looking as he's gotten older, with his hollow cheeks and incredibly blue eyes that are even more piercing now that they're a steely gray. Everything about Stamp seems whittled to the bone, even the economy of his movements -- like the way Wilson signals trust in an informant by sliding his pack of Luckies across the table to the man. Or the economy of his affection as it plays out in the scenes with Luis Guzman, in a warm performance as the ex-con who had been Jenny's friend and who becomes Wilson's sidekick. You feel all the confidence Wilson has placed in the man by the offhand way he calls him "Sancho."

The three volumes of autobiography Stamp published in Britain in the '80s revealed an abiding affection for the friends and lovers, co-stars and directors who had passed through his life. They were the writings of a man who carried the weight of memories, and the losses those memories called up. That's the weight that Stamp carries in this performance, the emotional life beneath his taciturn surface.

Stamp isn't the only '60s icon on display here. Peter Fonda plays Valentine, the hotshot record producer whom Jenny had been involved with, as a weak-willed wheeler-dealer still trading on his counterculture cachet. A few years ago in Michael Almereyda's "Nadja," Fonda played a modern-day Van Helsing tracking down Dracula's daughter. In some ways, he's a vampire hunter here, too. If it were possible to drive a stake through the heart of '60s sanctimoniousness -- and to know that the beast would stay dead -- Fonda's wickedly funny performance would do it. "You're not specific enough to be a person," Valentine's young girlfriend (Amelia Heinle) tells him, "you're more like a vibe." Has anybody ever come up with a better description of the amorphousness of Peter Fonda? The echoes of his father have never seemed stronger or more distant. Seeing Henry Fonda's smile, the smile that told us we were dealing with a nice guy, reincarnated in the immaculate snake Valentine is almost as unsettling to our movie memories as it was to see the elder Fonda turn up as the sadistic killer in "Once Upon a Time in the West."

But the vibe Peter Fonda is tapping into here is the counterculture hero he became with "Easy Rider." It's an obvious joke -- perhaps too obvious -- when Valentine rides down the highway in his expensive sports car and we hear Steppenwolf's "Magic Carpet Ride." The filmmakers have something better up their sleeve: the scene in which Valentine stands in front of the mirror cleaning his teeth, telling his young honey about the dream of the '60s. "And it was really only '66 and early '67," he says, talking about it as if it's a style he'll trade in when it ceases to do him any good.

In one scene, Wilson stands by the side of Valentine's pool, which hangs over the Hollywood Hills as if it were suspended in mid-air, and asks "What are we standing on?" "Trust," comes the answer. That's as good a joke as any movie has ever made on the impermanence of L.A. Soderbergh doesn't have the courage Robert Altman did in "The Long Goodbye"; he buys into noir conventions too much to satirize them. But he knows how noir can be mined to express the emotional dislocation of Los Angeles, its feeling of being not-quite-there.

As captured by the cinematographer Ed Lachman, this is a place where a coffee shop that's kept the same space-age decor since the '50s passes for a link to the past. Even the sunshine looks as if it owes more to the movies than to nature. In lesser hands than Soderbergh's and Stamp's, Wilson would finally be as much a movie creation as the landscape. But "The Limey" is too knowing, and Stamp too real, to give in to the fantasy. This may be the first noir where being the stranger in town is something like a badge of honor.