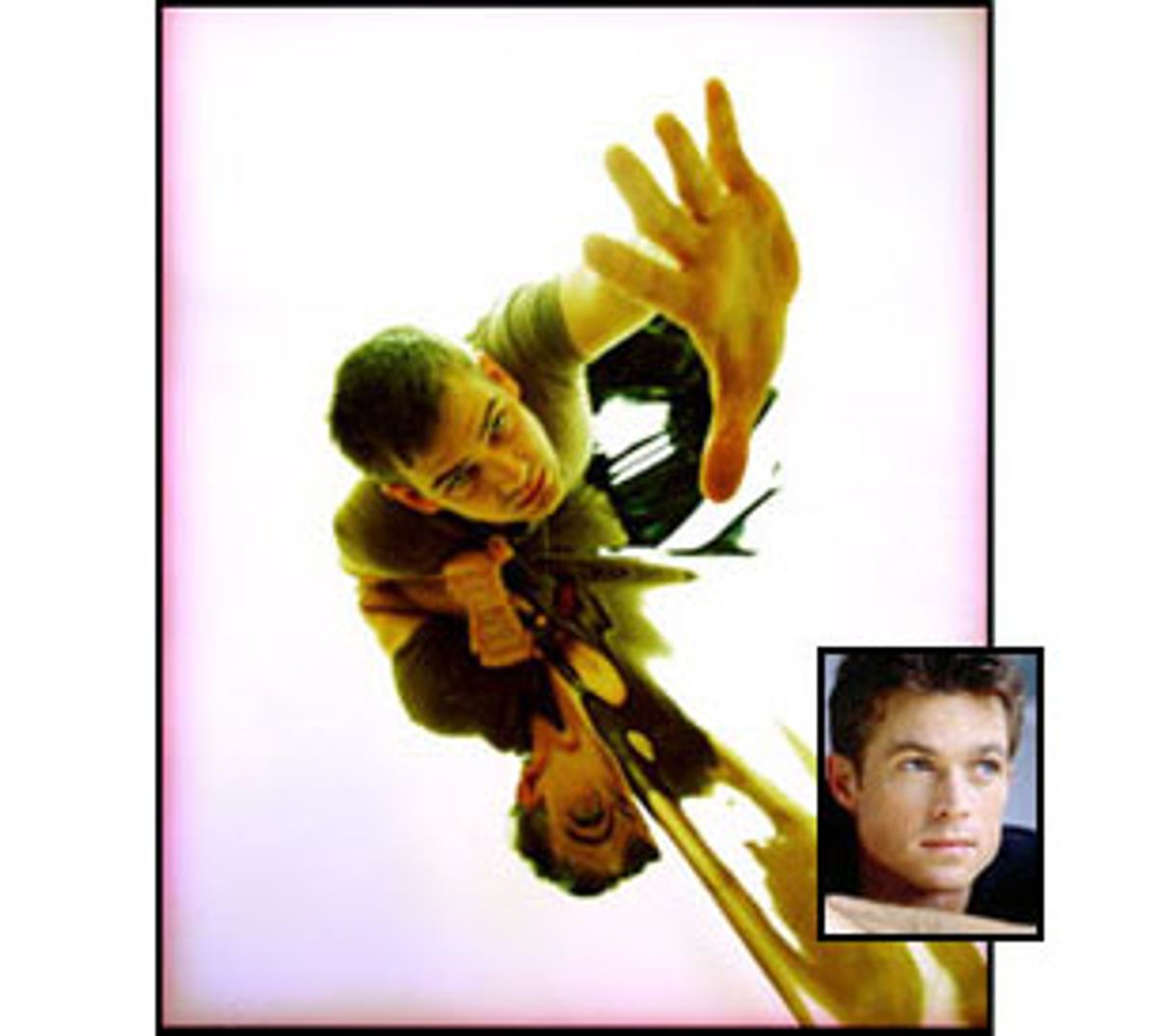 The opening credits feature spooky electronic music and flashes of vaguely unsettling images (clouds, tunnels, eyes), and they end with the superimposed cryptic phrase "It's just a game." Quick, name that producer!

With "Harsh Realm," his third series for Fox since 1993, Chris Carter joins a handful of TV creative legends (Quinn Martin, Norman Lear, Steven Bochco, to name a few) whose work is instantly recognizable to viewers -- often more recognizable than the cast members' names and faces. The "Harsh Realm" pilot is a Carter family affair; it co-stars Terry O'Quinn from Carter's "Millennium" and features unbilled cameos from Lance Henricksen (the star of "Millennium") and Gillian Anderson (in voice only) from "The X-Files." As a sci-fi drama, "Harsh Realm" falls somewhere between Carter's two previous series -- it's not as exhilaratingly addictive as "The X-Files," but, unlike the coldly uninviting "Millennium," it has characters and a mythology you could potentially care about.

"Harsh Realm" takes its title and the bare bones of its premise from a comic book series about virtual reality universes. In the show's pilot episode, a young Army corporal named Thomas Hobbes (Scott Bairstow), who was decorated for heroism while serving with a peacekeeping force in Sarajevo, is getting ready for his discharge; he plans to marry Sophie (Samantha Mathis) and move to California. One morning, he's summoned to see his colonel (Henricksen) and told that he's been chosen to participate in one last mission, a classified program called Harsh Realm. Harsh Realm is a computer war game developed by the Pentagon to simulate possible nuclear war and terrorism scenarios; it's a virtual reality "where landscapes and people are identical to our world, down to every man, woman and child." Hobbes is told that the game's "high scorer," a soldier named Santiago (O'Quinn), has hijacked the program and warped it. Hobbes' orders are to play Harsh Realm and "remove" Santiago's virtual character. After all, "it's just a game."

Hobbes begins watching what he thinks is an introductory video about Harsh Realm, but he has unwittingly already entered the game. What the Army hasn't told him is that no player ever sent to capture Santiago has been able to return from the virtual world. And if you die in Harsh Realm, you die, period.

Inside the Realm, Hobbes encounters a virtual ringer for Sophie, as well as his dead doggie and the old war buddy, Waters (Max Martini), whose life Hobbes saved in Sarajevo. But things are screwier inside the game than they are inside Alice's looking glass. Sophie doesn't know him and Waters is working for Santiago, who has made Harsh Realm his own personal dictatorship. Santiago lords over a coldly modern skyscraper city, his Che-like bereted image painted on the sides of city buses along with the slogan "One people, one nation, one Santiago." But the city is fenced off from a combat zone populated by desperate players who have become trapped inside the Realm and are forced to scavenge for food to stay alive.

At a church converted into a scuzzy bar, Hobbes meets a fellow soldier named Pinocchio (D.B. Sweeney) -- dig that symbolism -- who has become a Han Solo-like mercenary who's only out to save his own ass (if Pinocchio "can't eat it, bang it or burn it," he's not interested). Pinocchio grudgingly shows Hobbes a "glitch in the software" that enables them to pass undetected across the borderline into Santiago's city. Hobbes doesn't realize it, but Pinocchio, the other lost players and the virtual reality characters have been waiting for a long-rumored savior to free them -- and they believe Hobbes is the man. Indeed, by the end of the pilot, Hobbes' narration (he's supposedly writing letters to Sophie) starts sounding like the thoughts of a doubting Christ figure: "Whose destiny is this? It can't be mine. What is this trial I am being put through? Is it a test of my love for you?"

Part "Heart of Darkness," part "The Matrix," "Harsh Realm" is a dark ride into an intense parallel universe. The pilot's final overhead pull-back shot is Carter and his old "X-Files" collaborators, director Daniel Sackheim and director of photography Joel Ransom, at their bone-chilling, conspiratorial best. But "Harsh Realm" is the purest sci-fi show Carter's done; it's closer in tone to "Star Trek" than to either "The X-Files" or "Millennium." And that might put off viewers who prefer their chills to be grounded in the eerily plausible.

Carter's influence on TV in the '90s is undeniable. With "The X-Files," he revived sci-fi as a viable network genre by cloaking it in the trappings of the gritty cop dramas viewers had grown accustomed to. But he also seeded the shows with free-floating millennial anxiety, distrust of government and spiritual hunger. The Carter formula is all over CBS' new "Now and Again," which competes with "Harsh Realm" in the 9 p.m. Friday slot. "Now and Again" was created by Glenn Gordon Caron, who did "Moonlighting," but it's nothing at all like "Moonlighting." "Now and Again" is a sci-fi series about the randomness of fate and the myths people develop to fool themselves into believing they're safe from harm and in control of their destinies.

The striking pilot episode (which aired Sept. 24) depicted one very bad day in the life of Michael Wiseman (guest star John Goodman, in a heart-rending performance), a middle-aged, big-bellied, big-hearted New York insurance executive. In the morning, Wiseman's wife, Lisa (Margaret Colin), rebuffs his affections; his teenage daughter, Heather (Heather Matarazzo), gives him attitude over breakfast. In the afternoon, Wiseman learns that he has been passed over for a promotion, which goes instead to a younger worker whom he had trained. At quitting time, Wiseman goes out with his pal Roger (Gerrit Graham) and gets drunk; by nightfall, Wiseman is dead -- he's accidentally jostled on a subway platform and falls under a train. All of this is undercut with taut, nearly wordless scenes of an elderly Asian terrorist methodically planting nerve-gas-laced eggs on a Japanese subway train and in a Paris airport. After two weeks on the air, Caron is still taking his sweet time bringing these events, a world apart, together.

Ah, but Wiseman isn't entirely dead, although his family thinks so. His uninjured brain was secretly salvaged by a shadowy government group -- Is there any other kind? -- and hooked up to a wealth of technology. Wiseman's brain comes out of its grogginess to process a neat proposition made by a garrulous government agent named Dr. Theo Morris (Dennis Haysbert). Wiseman -- or rather, his brain -- has been selected to animate a covertly built superman, "an American man," as Morris' rousing sell-job explains, "a man who could do those things mere mortal American men are loath to do. Travel in dangerous places! Take risks! Wage wars!" ("Now and Again" lucked into the Susan Faludi/downsized-man Zeitgeist.) The catch is, Wiseman can't contact anyone from his previous life, or else he and they will be terminated.

Wiseman agrees and he's plugged into the ripped, man-made bod of a young superstud (Eric Close). He's the new $6 million man. Actually, he's the $3 billion man, but four out of five taxpayers would probably agree that he's a lot cuter than the Hubble Space Telescope. Memories, alas, are stubborn things, and Wiseman soon finds himself in a lonely funk; he misses his wife and daughter. By last week's episode (the show's second), he had busted out of confinement and made contact with his sad widow (who had been stiffed out of Wiseman's life insurance money by his greedy employers); he didn't tell her who he was, letting her think he was some kind of handsome, homeless wacko. But soon the government boys caught up to him and he was corralled again and prepped for his first assignment: Catch the nerve-gas-dispensing terrorist, who has reached New York.

"Now and Again" is a pleasing blend of dark humor, suspense and soulful yearning for departed loved ones and lost youth. Caron was obviously influenced by the John Frankenheimer movie "Seconds," which starred Rock Hudson as a burnt-out middle-aged businessman granted a new, youthful identity. But the show also harbors a puckish, "X-Files"-style (with nods to "The Twilight Zone") irony -- an irony that Carter shows absolutely none of in "Harsh Realm," by the way. Wiseman sold insurance for a living; he believed in insurance. But, in the end, all of his actuarial tables and policies and assessments of risk couldn't keep him, or his family, safe. The world is a harsh realm.