Among Egypt's minarets and mosques, covered women buy a ton of teddies. 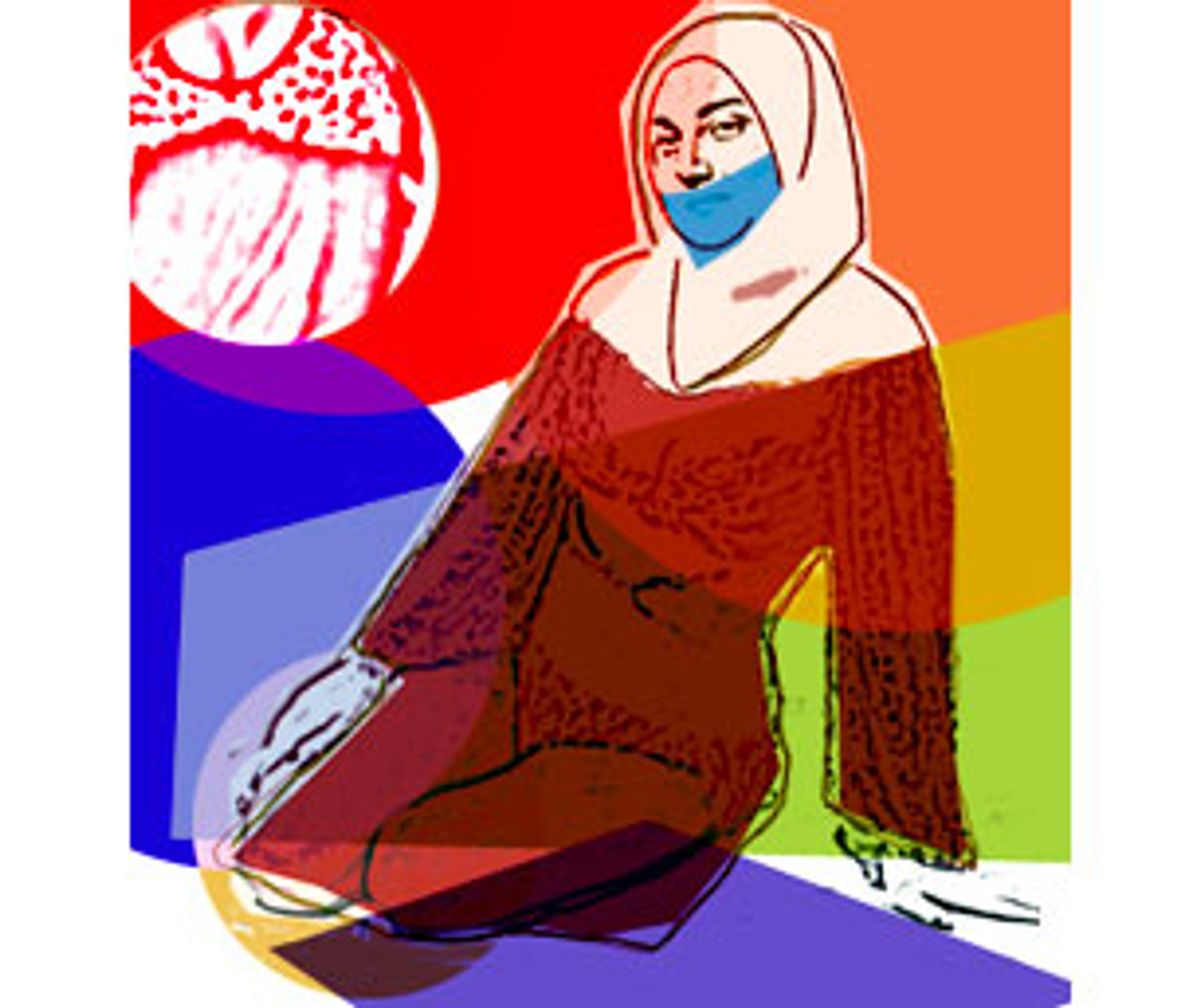 Climb to the top of the 13th century Qalaun mosque, in the heart of Fatamid Cairo, and survey the intersecting worlds of faith and commerce. Hundreds of Islamic monuments -- a pointy hodgepodge of pepper-pot towers and pumpkin-domed minarets -- punctuate a maze of alleys with names like "the street of the coppersmiths" and "the street of the tent-makers." Along with the muezzin's call to prayer, sounds from the Khan al-Khalili bazaar rise into the mote-filled air. The melodic exhortation "Allah-hu Akbar" (God is great) mingles with a chorus of touts perpetually eager to sell perfume and busts of Queen Nefertiti to a parade of dazed Western tourists.

Now let us descend from our minaret balcony to the Moski, a vast market where devout Muslims come to shop after noontime prayers. Dodging water-sellers and small boys carrying trays of sweet Arabic coffee, groups of veiled women browse among baskets of spices, bolts of cloth and gold jewelry for dowries.

The women pause before a pushcart bearing a mountain of colored silk and nylon. What's that woman holding up? Why, a G-string and a black-lace teddy.

That's right, an open-air sexy underwear souk thrives in the heart of Islamic Cairo, a few brazen footsteps from the Sayyidna al-Hussein Mosque. The mosque is home to the largest congregation in Egypt and a shrine where a head, believed to be that of the Prophet Mohammed's grandson, Hussein, is interred. To a Western eye, the contrast seems shocking, as if Frederick's of Hollywood had opened an outlet right next to the Vatican.

Jumbled on pushcarts or hanging from shop fronts is enough lingerie to dress a millennium's worth of Playboy centerfolds or, given the prevalence of size XXXL, the entire buxom oeuvre of film director Russ Meyer. We're talking bras with silver nipple tassles, plunging bustlines and feather boas. We're talking see-through bathrobes, skimpy nighties and fire-engine-red panties with thigh slits up to here.

The vixens shopping for these alluring undergarments prefer a more conservative fagade: even in 95-degree heat they're wearing shapeless floor-length dresses, tightly fitting headscarves, long sleeves and even gloves. More than a fashion statement, this is a dress code: no exposed flesh, no uncovered hair.

The West generally associates the veil with fundamentalism and repression, with the public morality police in Iran, Saudi Arabia and Talaban-run Afghanistan. But for veiled Egyptian women, it seems there's no contradiction between public decorum and private eroticism.

Nineteenth century Europeans lapped up all this voluptuous exoticism and regarded the veil as the talisman of a hidden and powerful sexuality. This impression was no doubt aided by the enthusiastic accounts of French author Gustave Flaubert, who arrived in Cairo in November 1849, and immediately went trolling for prostitutes, and by the works of British explorer and Arabist Sir Richard Burton, who entertained a generation of sex-starved Victorians with annotated translations of Oriental sex manuals, including a 15th century Arabic handbook, "The Perfumed Garden."

Isabelle Burton considered "The Perfumed Garden" particularly pornographic. Upon her husband's death she cloistered herself in his room and burned his master copy, along with three decades' worth of notebooks and private journals. This massive act of censorship took her 16 days and superceded the actual funeral arrangements. She apparently found Burton's unexpurgated translation of "The Thousand and One Nights" less objectionable. Despite detailed accounts of copulation, this six-volume work survives, along with innumerable ribald passages, such as "He sheathed his steel rod in her scabbard ... whilst she with him ceased not from inclination and prostration and rising up and sitting down, while accompanying her ejaculations of praise and of 'Glory to Allah!' with passionate movements and wrigglings and claspings of his member ..."

Late-20th century Egyptian society remains deeply conservative, especially where relations between the sexes are concerned. Women aren't ordered to remove their lipstick as in Iran, but Egyptian law does require belly dancers to cover their navels. Explicit sex scenes in movies? Forget it. A court recently charged Egypt's most popular actress, Youssra, with adultery and public indecency after she appeared in bed with a male actor in a publicity shot for the film "Hassan and Aziza: A State Security Case," despite the fact that the movie itself had already been vetted by government censors. Islamic lawyers also took her to task for wearing a sheer outfit in an earlier film, "Birds of Darkness."

"It is important to consider the context under which a movie poster features a man and a woman in one bed," says the 43-year-old screen siren, who denies that the main idea was to suggest an unmarried man and woman making love. "They are shown terrified, surrounded by policemen toting guns. There is no way that the scene will arouse lust."

Though such Draconian interpretations of Islamic Sharia law might suggest otherwise, the Koran contains no restrictions on married sex (or almost none, as the Muslim holy book discourages fornication with the head or rear end facing Mecca and expressly forbids necrophilia with one's spouse). Indeed, the Koran praises physical beauty as an attribute of God; according to its precepts, sex is a duty and an act of faith -- so long as it is conducted between husband and wife.

Though the Koran commands women to lower their gazes and "throw their veils over their bosoms" in public, it encourages them to shed such inhibitions in the home. The prophet, who took at least seven wives, promoted marital tenderness and sexual enjoyment. According to the hadith -- the massive body of anecdotal traditions and sayings compiled by his followers -- he even advised Muslim men to engage in foreplay: "When any one of you has sex with his wife, then he should not go to them like birds; instead he should be slow and delaying."

Judging by Cairo's underwear souk, today's faithful are happy to obey their prophet's call to conjugal bliss. Happy to the tune of $10 million in annual sales, according to Adel Akl, marketing manager of the French-Egyptian joint venture Valisere, which commands 60 percent of the Egyptian lingerie business. "Only 20 percent of our models are conservative," he says. "The rest, how shall I put it, are more daring."

Not surprisingly, many sexy underwear shoppers in the Moski claim to be preparing for their honeymoons.

"My fianci asked me to get something nice," says Nagla Al-Safi, a dark-eyed 22-year-old from Port Said who has come to the Egyptian capital with her mother and niece to pick out a dozen nighties and bathrobes for her trousseau. "As he's my future husband, I don't feel embarrassed," she says, checking the price tag on an emerald green negligee. "God doesn't restrict the relationship between man and wife."

"They don't just buy one thing, they buy several, and the mother usually takes the opportunity to buy a little something for herself," confirms Sarwat Munis, a 24-year-old salesman who moves about $15,000 worth of merchandise each month. The most popular item in his shop is a violet lace bodice, accented with hot pink fringe. It sells for 25 Egyptian pounds, or just over $7.

Munis doesn't see any problem helping an Islamic woman pick out a hot little number for a night of love. "I don't get embarrassed," he says. "First of all, I'm Christian. Second, I tell myself, this woman is like my sister."

"Naturally, not every woman is a youngster, and not every woman who says so is a bride," winks Salah Al-Shaboul, a grandfatherly merchant who has been selling teddies with names like "Fires of Jealousy" from the same pushcart for 40 years. "There are certain principles of the sexual relationship that I cannot discuss in detail. There are women who like to let their hair down and some who don't. But that doesn't have anything to do with Islam. It has to do with flirting."

"In Europe today," he continues, "sex is out in the open, but it is cold and faceless, and you can see it at the movies or do it in the street. In our country it has remained something intimate and secret, and therefore it's more appreciated."

Susan Hack is a writer who lives in Paris.