Down in the trenches

Donna Brazile, the new manager of Al Gore's presidential campaign, has a reputation as a tenacious political attack dog. 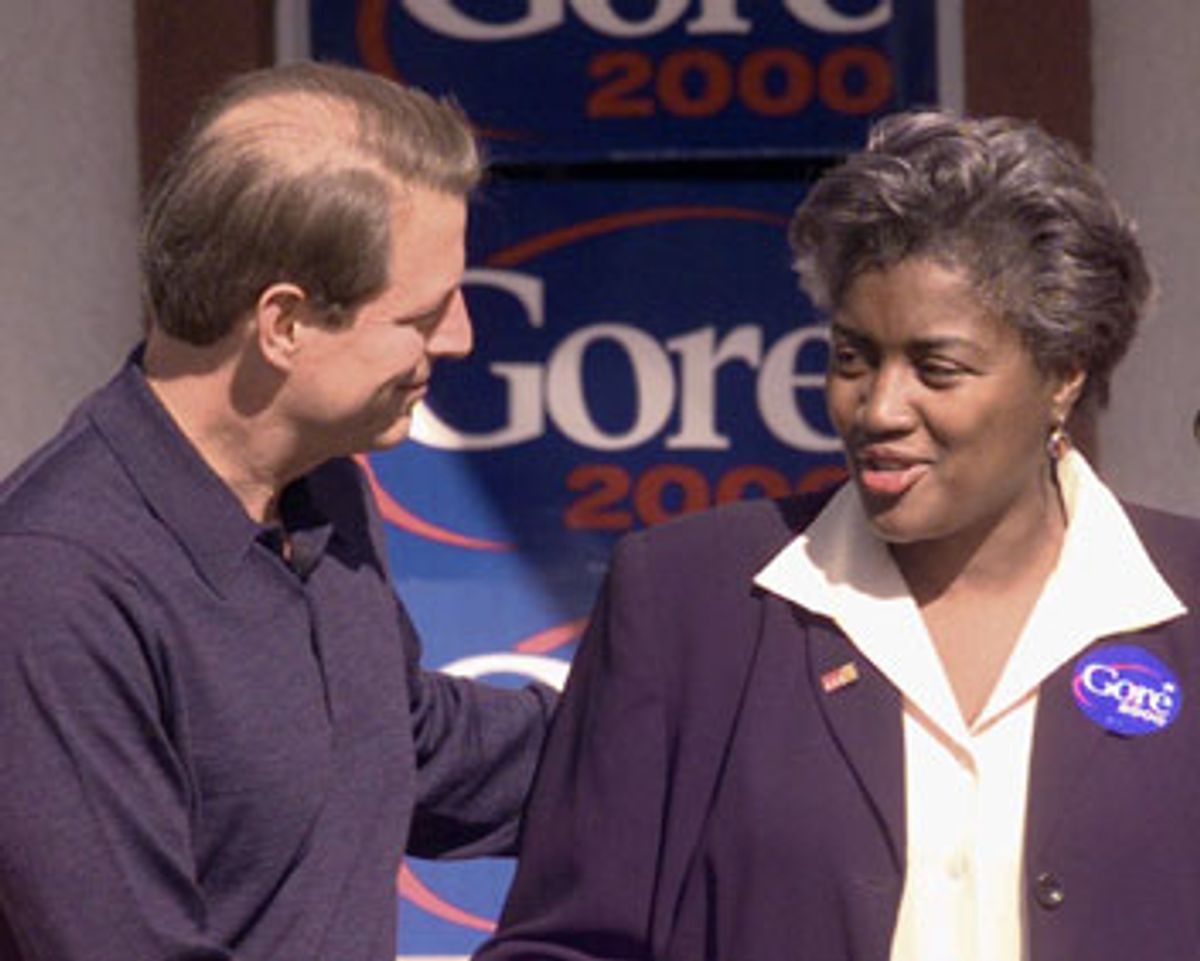 As Vice President Al Gore's campaign workers get to know their new Nashville digs, the press is getting reacquainted with Gore's new campaign manager, Donna Brazile. The former Dukakis operative was promoted as part of the veep's effort to shake things up and inject new life into his lagging presidential campaign.

Gore campaign spokeswoman Kiki Moore was vague about Brazile's day-to-day responsibilities. "The vice president wants to take the campaign in a certain direction and Donna fits in perfectly with what we are trying to do," she said.

But according to Robert Borosage, a former campaign staffer for Jesse Jackson who heads the Campaign for America's Future, Brazile has been called in to help the trains run on time. "The vice president's schedule is completely out of sync with the campaign schedule. It will be up to Donna to work that whole thing out," he said. Brazile has to get the campaign in gear and "energize the troops so that they go into Iowa prepared," he said.

The pairing of Gore and Brazile is a contrast in styles, pitting Gore, the self-acknowledged "stiff," against Brazile, who is loose, charismatic, chatty and vibrant. Gore speaks in cautious and measured tones; Brazile is driven and brash, given to speaking in a slew of four-letter words that do not stop in the presence of the press.

"I don't know about him," she said of her new boss, "but I feel opposites attract and together we can make good music, if he lets it happen."

Known as a talented field operative and grass-roots organizer, the first black woman to head a major contender's presidential campaign will not report to Gore directly but to forceful campaign chairman Tony Coehlo. Friends of Brazile like Borosage say she sought direct access to Gore. "She's tough," Borosage said. "I am sure one of the first things she asked [after being appointed] is if she could report directly to Gore." But Gore turned her down.

Brazile said she has no problems reporting to Coehlo, and chastised members of the press corps for pushing the issue of the Gore campaign organizational chart. "Why is it men always want to know who you report to?" she said.

The question has drawn attention, however, because of lingering doubts about her "maturity" that date from her notorious 1988 comment about whose bed Barbara Bush sleeps in. She was working as a deputy field operator on Michael Dukakis' presidential bid amid rumors that GOP nominee George Bush was having an affair with a woman named Jennifer Fitzgerald. The press was reluctant to publish the story. So she said, "The American people have every right to know if Barbara Bush will share that bed with him in the White House."

Her remarks were a major embarrassment for the Dukakis campaign and Brazile was forced to resign. It may be for that reason that Gore decided to take full advantage of her organizational skills while distancing himself from her personally.

It is still unclear whether in the Barbara Bush statement Brazile was following orders or acting on her own. Friends insist she made her comments only after discussing them with superiors. Others have doubts. They say she was acting on her own and cite this as evidence of her "immaturity."

For her part, Brazile wishes the whole matter would go away. "That's all in the past," she said. "That was 10 years ago. I've come a long way from that. Let's move on."

Brazile is the third of nine children born to Lionel and Jean Brazile. Her father was a janitor and her mother a domestic worker. "We grew up poor," she said, literally on the wrong side of the tracks. After graduating from Louisiana State University, Brazile took an offer from Coretta Scott King to help organize the 20th anniversary of the historic March on Washington. A year later, she joined Jesse Jackson's 1984 presidential campaign as an advance person.

After being forced to leave the Dukakis campaign, Brazile called her mother and headed home to Kenner, La., near New Orleans. A Roman Catholic, she said she later did "penance" by spending nine months in a Washington homeless shelter with homeless advocate Mitch Snyder. She went on to run the successful campaign of Eleanor Holmes Norton for the District of Columbia's at-large seat in Congress, and served with Norton as chief of staff before joining the Gore campaign.

Those who know her say she is more than qualified for her new assignment. Frank Watkins, communications director for Rep. Jesse Jackson, Jr., D-Ill., worked with her on Jesse Jackson Sr.'s initial presidential run. He pointed out that there is only so much she can do. "She's not a doctor. She can't fix what's wrong with him. The candidate will have to do that himself," he said.

Brazile belongs to an informal club of four black women who meet periodically in Washington to exchange political views and chat about strategy. One member of that club is Mignon Moore, Brazile's closest friend and assistant for political affairs for President Clinton. Moore said she gave Brazile one short piece of advice: "Stay focused and do what you do best."

What she does best, according to Bill Lynch Jr. of the Democratic National Committee, is grass-roots organizing and field operations. But, added Lynch, "That's a misnomer, because I think Donna has got the complete package and can do anything in a political campaign."