Cold plunges and sport singing: Life in a Russian kindergarten

A wee New Yorker is sent to Rodnik, a temple of rigidity and complex grammar. And he loves it. 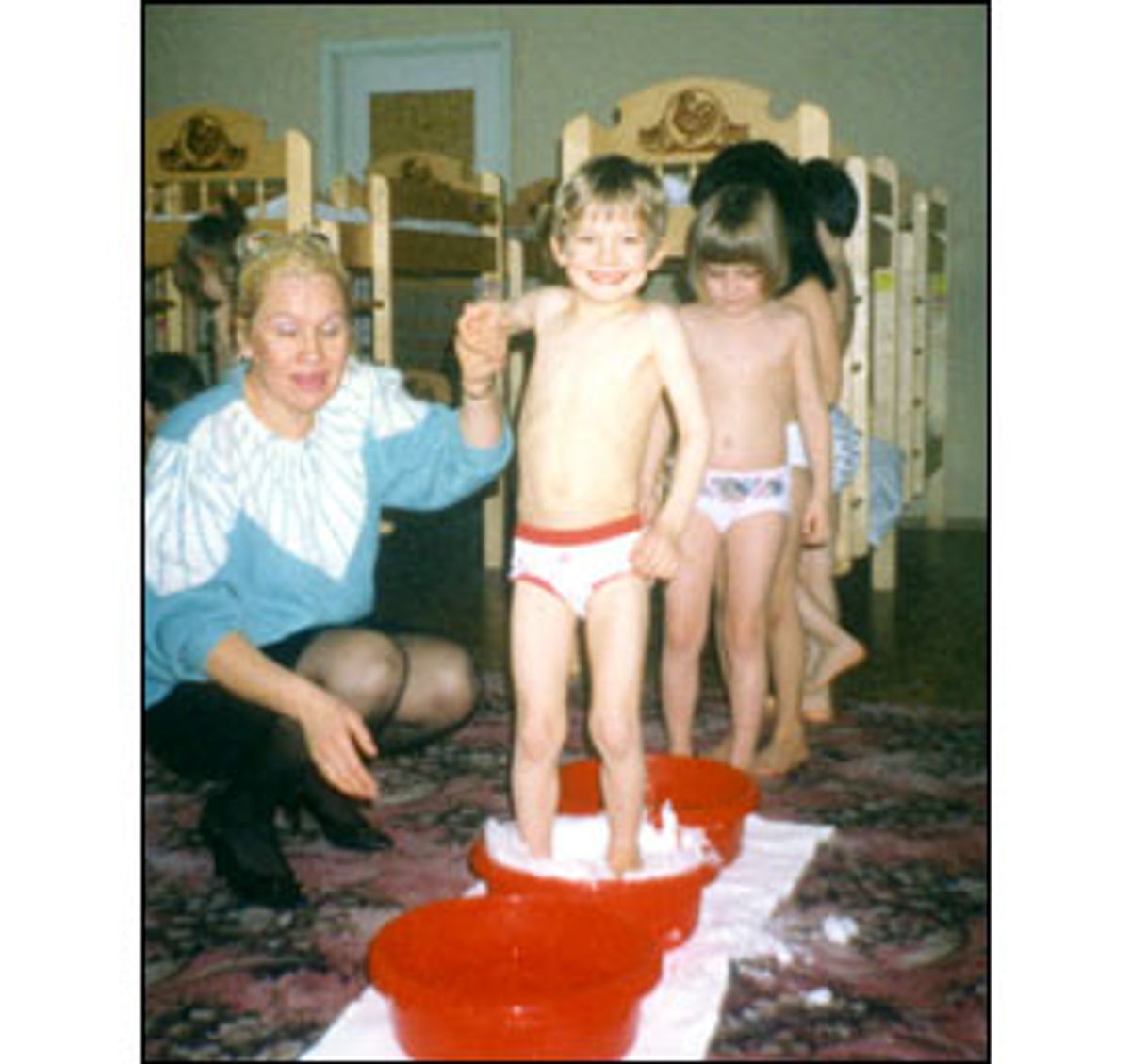 There's my son in the photograph, first in line among the 10 boys and girls
in his kindergarten class. It's Jan. 20, they're stripped down to their underwear, and Sam is standing in a wash basin full of snow. He is smiling. He tells us that every day after lunch, the children of kindergarten No. 1671 parade from a basin of warm water to one of snow (or cold water when there is no snow) to another of warm water. Then they dry off and climb into wooden bunk beds for naps.

"They do this to be healthy," says Sam. He says it's fun. I learn that it is called "tempering," a practice designed to make children become "strong as steel" to survive the long, cold Russian winters in good health. Once again my husband and I question our decision to put our very American, New York-born little boy into a Russian kindergarten -- cold turkey.

We moved to Moscow early in 1997 from New York City. My husband, then a reporter for the Associated Press, had taken a job as a Moscow correspondent. Our time there, we felt certain, would be wonderful for Sam and his 16-month-old brother. We thought a second language would be a huge gift, especially as we struggled mightily to
learn enough Russian to buy food once we got there. And even if we could have afforded the $10,000 it would cost for Sam to go to the American school in Moscow, we figured Russian school would be a great opportunity for our son.

Also, to be honest, I was quite happy to escape the pressure of choosing a school in New York. When Sam was barely 3, people began asking whether we'd applied to nursery schools, taken exams, made the big decision. Strangers in restaurants and parks would ask where he was going to go to school. There were good schools and other schools, schools that did not lead to Yale but to a destiny too awful to contemplate.

Our choice took us out of competition. But it didn't take away the anxiety. We decided to send Sam to a school where neither he nor we could speak more than a few words to the teachers, a place where we would know only what our 5-year-old son chose to tell us about his days.

We chose Rodnik, kindergarten No. 1671, for a couple of reasons. A
Russian friend had called the Moscow education department and gotten a
recommendation. And in walks around the neighborhood, I had found it to be the only school without broken glass in the playground and crumbling
exteriors. It turned out that two other American families and one
Russian-American family also chose it. Thank God, I thought: solidarity.

When my husband and I visited Rodnik, we were still naive enough to ask what sort of curriculum was used. At first, Nadyezhda Mikhailovna, the imperious director, could not understand the question. Finally, she gave us a withering look and replied, as if to simpletons, "The National Curriculum, of course."

Having not a clue what that might be but feeling that the woman who would be his teacher was warm and friendly, we signed Sam up. And so on that Sept. 1 he left home clutching a bouquet of flowers, which every schoolchild in Russia brings to the teacher on opening day. (No surprise that a country with a National Curriculum also has a nationwide
first day of school. It also turned out to be the only day we had the services
of a crossing guard on our super-busy street.)

Rodnik is a square, three-story building in the Krilatskoe Hills of western
Moscow. The playground is appallingly dilapidated (though normal for
Moscow), and the building is at home among the surrounding, equally
dilapidated Brezhnev-era high-rises. Inside it's charming: mosaics and
photos of children on the walls, pint-size painted wooden furniture,
a small swimming pool and rooms for music and gym. Sam's group had a
changing room with big bulletin boards to show off their schoolwork; a room for work, play and meals; and a sleeping room with a half-dozen bunk beds.

From the start, life at Rodnik (which means a water spring) seemed
harder for us than for Sam, who came home each day full of tales about new
friends and accomplishments. What we saw as rigidity or evidence of outdated theories, Sam simply took in stride. Early on, when I asked him how he knew what to do if he didn't understand the teacher's words, he looked at me as though I were a fool and said, "I just look at the other kids and do what they're doing."

One day, Sam showed me a bulletin board covered with paintings of snowmen. All were identical, except for one. That picture, he explained, was "wrong." As with most things at kindergarten 1671, there was a right way and a wrong way to draw, with very little room for individual expression. When a child was not able to draw a perfect circle, Sam explained, the teacher usually drew them instead. Teachers also demanded that Sam have the "right" slippers for school and that he bring only one kind of paint (Russian-produced, never foreign-made).

The stubborn right-mindedness culminated for me in the New Year's show, Rodnik's biggest event of the year. While Russia is no longer an atheist state, all the trappings of Christmas -- trees, parties, presents brought by the magical, blue-robed Grandfather Frost -- remain relegated to New Year's celebrations. And at every kindergarten, or "dyetsky sad" in Russian, the children put on a show and have a party.

In Sam's class, all the boys were rabbits and all the girls were snow maidens, a character akin to a young Mrs. Claus. Diana, Sam's beautiful and athletic
classmate, wanted to be a rabbit, not a maiden. When she refused to put on
her white dress and instead sat sobbing on a couch, she was taken home and missed the celebration. By the next assembly, in the spring, she sat with her hands in her lap, dressed in a pretty dress with a pale blue satin ribbon tied around her neck. I ached for her.

Rodnik children learned to recite poetry and sing songs in front of their
parents and teachers. But they were played for their strengths, not their interests, in order to avoid the possibility of much-dreaded mistakes. The same kids always got the biggest parts; the best singers always sang; the prettiest girls always played the girliest roles. On "health day" it hit home again. For this, a day full of athletic contests, Sam, being the smallest child in his class, was chosen to compete at the well-known sport of singing. The taller, stronger kids were chosen for running, jumping and other sports.

Life at Rodnik turned out to be a strange mix of indulgence and demand. When the children weren't being coddled they were being pushed from the nest. Teachers would routinely help 5-year-olds dress each day but expected them to learn fractions, memorize long passages and master relatively complex grammar.

To learn early-reading skills, the children would say a word, the number of
letters it contained, the number of sounds, the number of vowels and the
number of consonants. That was the way, the only way. The reading teacher worked from a national manual; you could imagine millions of little 5-year-olds reciting, in Russian: "dom," which means house: "three letters, three sounds, one vowel, two consonants."

We grownups were treated as oversized children. At
parents' meetings, teachers would openly criticize their pupils -- this one doesn't pay
attention, that one eats poorly, this one is not doing well in math -- and blame the parents. I was scolded on more than one morning for
not dressing Sam warmly enough or for being late. Parents were welcome in school
only when invited, their opinions were never sought, and they were usually wrong if they ventured a thought. At first I assumed I was being singled out because I was an
American whose Russian was rather poor. But soon I learned that every parent
is assumed to know less about raising their children than the school.

So how could we let Sam go to school there for two years? He thrived at Rodnik. He took learning seriously and worked with pride. He was truly loved and cared for in a class of 10 children and two teachers. He cross-country skied at recess and danced in the afternoon. There was homemade soup with freshly baked rolls at lunch.

Sam graduated from Rodnik in May, certified ready for first grade. Over the summer, we moved to Los Angeles. Here, his class is racially and ethnically diverse, the school makes an effort to include parents and the curriculum allows some freedom of expression. Then again, his first-grade class has twice as many children as Rodnik and half as many teachers. There is not enough art or music, nowhere near as much as in Russia.

I fully expected to feel nostalgic about Rodnik and I do. We all do. The experience was hard and foreign but it was also warm, even comforting. It was tempering. And we are healthier for it.

Mary MacVean is a freelance writer living in Los Angeles.