When Baltimore, which is 65 percent black, chose a white as its next mayor, it marked a watershed event in the evolution of America's racial politics. 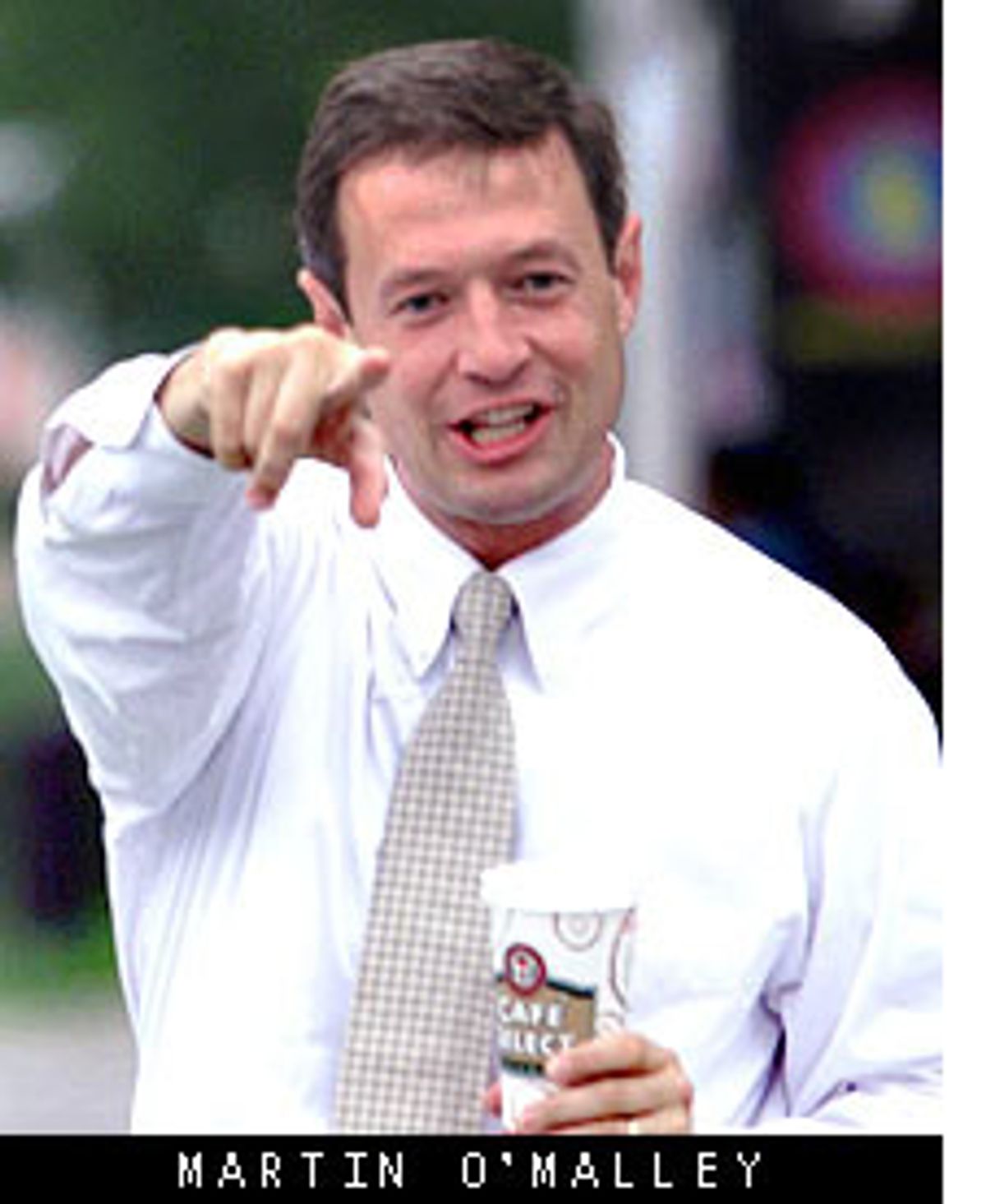 It was the headline -- "White man gets mayoral nomination in Baltimore" -- that got the Washington Post into so much hot water last month that its ombudsman, R. Shipp, felt obliged to issue this odd mea culpa:

[The headline] reveals a heightened sensitivity to race and ethnicity but
an ineptness in dealing with race and ethnicity. By most
accounts, his race was no more the deciding factor in his victory than was
Serena Williams's in hers in the U.S. Open this month. Thankfully, The Post
did not declare then that "Black Girl Wins."

What an ingeniously seductive analogy! Too bad, however, that the situations aren't analogous. The outcome of the U.S. Open is news regardless of who the winner is, but if Martin O'Malley (the new Democratic nominee and shoo-in for mayor) were black rather than white, few outside of Baltimore would have noticed. His whiteness was, in fact, the news.

Yet, most of us would agree with Shipp that something seems wrong about communicating this news so nakedly with that headline. The reasons we feel this way are revealing about the state of public dialogue about race these days.

Baltimore is 65 percent black; 60 percent of its registered voters are black. The incumbent mayor, Kurt Schmoke, was the first African-American ever elected to that post, and O'Malley bested two black candidates for his victory. Furthermore, to win the Democratic primary in this 90 percent Democratic city is to win the general election. The real question may be why a white man wants to be mayor of Baltimore.

This is a city stuck in a long-term downward spiral. Baltimore is hemorrhaging middle-class residents to the suburbs at the rate of 1,000 a month. The white population has dropped by a third in this decade alone. Of the remaining city residents, one in 10 is a drug addict. And the city has the highest incidence of syphilis in the country.

There are signs that the city's crime rate may finally be lessening, but it's still on course to log 300 homicides this year. Open-air drug markets are blatant and ubiquitous. The renaissance of other problem-ridden East Coast cities like New York and Boston has so far eluded Baltimore.

This, then, is the context in which, after 12 years of ineffectual black leadership, Baltimore is reverting to white leadership. But this time, it is a white man widely supported by blacks as part of a broad-based interracial coalition. Now thatmay be news. Race was everywhere, and yet -- as we're given to believe by the Post and by the New York Times, with its "Baltimore Democrats Pick White Councilman in Mayoral Primary" coverage -- nowhere in this election.

"O'Malley support strong in poorer neighborhoods, analyst says," offers the Associated Press, apparently trusting its readers to make the connection themselves. The AP story goes on to explain that O'Malley swept both black and white poor neighborhoods -- but we all know it was the poor black neighborhoods that made his win so newsworthy; it's those we were meant to envision when we read that headline.

What's really going on here is that "race," as it is used in public discourse, actually refers to the behavior of minorities -- O.J. Simpson's trial was about race, but Claus von Bulow's wasn't. It's a way to discuss minorities, whether benignly or maliciously, without appearing to do so.

The reality, of course, is that blacks have always voted for whites; they've had very little opportunity to do otherwise. It's whites who've only recently begun to vote for minorities; blacks remain substantially more likely to vote cross-racially than are whites.

Still, given the radical redistribution of power that has taken place in Baltimore and elsewhere -- and thanks to the civil rights movement and changing demographics -- we are looking at a watershed event here.

"Every group voted in blocs and waited for their turn -- the Jews, the Irish, the Italians," he explains. "When you get to a certain point, you start expecting that certain positions ought to be black, or Catholic or whatever. Getting that 'first' -- first black school superintendent, first black mayor -- becomes a goal, it proves something.

"Once you get that 'first,' that office belongs to you," he continues. "It means that you've come into your own after a long period of powerlessness. So lots of people felt that the mayor of Baltimore, the symbol of a majority-black city, is supposed to [always]
be black once Mayor Schmoke made it, just like other groups have felt."

Roundly considered to be honest and hard-working, the Ivy League Schmoke is
"every mother's dream," says state Sen. Barbara Hoffman (who is white).
"He's spent the last 12 years accomplishing nothing," she concedes, "but
still, I'd probably have supported him again. Baltimore needs someone like him."

But when both Schmoke and Kweisi Mfume, the head of the NAACP, chose not to run this time, Hoffman joined a group of officials and activists in trying to convince other talented blacks to run. "We just can't have a white mayor, supported by a group of whites, as mayor of Baltimore," Hoffman explains. "Mfume was the best candidate and we pulled out all the stops to get him. But he's doing too well where he is. We approached so many talented blacks, but no one good would
run. They're all making too much money and don't want to be in politics."

Admitting defeat in the effort to find a top-line candidate, Hoffman's coalition initially threw its support to black City Councilman Carl Stokes over his black rival, City Council President Lawrence Bell. But then both Stokes and Bell suffered embarrassing meltdowns on the campaign trail.

"Stokes had 25 percent of the white vote. I'd have stayed with him and so would have
lots of other whites. [But] then it began," Hoffman says grimly. It was a snowball of revelations that Stokes had lied about being a college graduate and failed to pay income tax for four years, among other financial irregularities.

"It was a lapse in an otherwise good record," said Rawlings, the Assembly delegate, still sounding disappointed, "but you just can't print lies in your campaign literature. On top of that, he's indecisive, doesn't know how to say 'no' to people. It's hard to govern that way."

Hoffman was less sanguine. "I was so mad at Stokes when it came out I wouldn't even talk to him when he called," she says. She concurs with Rawlings that Stokes has a difficult time with difficult decisions and tries to be a "pleaser."

As for candidate Bell, I could find few leaders who evidenced anything but overt contempt for him. One called his election to both the City Council and its presidency "flukes," and charged that his well-off parents had "bought" the offices for him. However he may have earned his sinecures, Bell used them to spend $4,000 in campaign funds on a Saks shopping spree in New York. He was evicted from his condo and had his Mustang repossessed: He was ridiculed as "the best dressed man walking the campaign trail."

These lapses paled next to his blatant race-baiting, however. After O'Malley's late entrance into the race set the stage for exploiting the split in the black vote, Bell's rhetoric and tactics bordered on the psychotic. He exhorted citizens to vote for "someone who looked like them" and his minions threatened and intimidated black O'Malley backers, whom they denounced as "so-called pseudo-Negro political leaders."

Respected O'Malley supporters like Rawlings and state Sen. Joan Carter Conway were shouted down and booed. His operatives crashed and disrupted an O'Malley rally, and distributed phoney white supremacist literature, supposedly in support of the white candidate. As a final act of political suicide, Bell called in disgraced former Washington Mayor Marion Barry to campaign for him in the final days.

The voters had no trouble analyzing their feelings for the three candidates: O'Malley won a clear majority, 53 percent of the vote. He would have won even had Stokes' and Bell's votes been added together.

"The people responded to his Zero Tolerance crime platform," says Hoffman, "and he was truly the result of an interracial coalition. None of us would have supported him without that."

"There is a race story here, but it is not that blacks voted for a white man," Hoffman adds. "They've always done that. It's how the races overcame their differences and fears to come together to elect the best candidate."

Race, then, mattered at every point in this campaign. O'Malley's backers required him to secure wide-ranging endorsements, all of which came with strings attached (such as guarantees on the racial composition of governing boards).

Though O'Malley denies it, he probably would never have entered the race if he didn't think the divided black vote would give him a good shot at winning. While he claims he only entered because he thought neither Stokes nor Bell was good enough for Baltimore, he didn't get into it until Schmoke and Mfume, either of whom would have defeated him easily, bowed out.

Says Rawlings, "It's just politics for him to say he didn't run because of the split black vote. He wouldn't have without that."

So why does everyone keep saying the election proves race doesn't matter?

What's really meant here is that, while race does matter (at least for now), it
no longer need be determinative. Racial progress really has been made. The problems in Baltimore run so deep that the people who care about the city are now desperate enough to try to trust one another.

Rawlings points out that once a minority has achieved its "firsts" and solidified its societal position, it moves on to higher-order group needs, "like responsiveness [of elected officials] and competence. You begin to find it more important that the people you've elected do more than just 'look like you.' They have to produce. That's what this election was about. The people didn't believe Stokes and Bell would produce, based on their campaign conduct, and [they believed] that O'Malley would. It's that simple."

The key piece in that analysis is that blacks now have some faith that times really have changed and that whites can now be trusted. Race does matter in Baltimore, all assertions to the contrary notwithstanding. It's just that, for once, it matters in a responsible way. Nationally, whites have been using the media to send a coded, and often condescending, message of approval: "an electorate apparently ready to put aside race."

Now who could that be?

If, as one commentator wrote, O'Malley had to overcome the problem that "race is a key factor in Baltimore mayoral politics, where 65 percent of the population is black," why isn't the same true in a city that is 65 percent white? It was left to one of the losing black politicians, Stokes, to issue the most condescending statement of all -- that he was "proud that race was not a factor ... I'm very proud of the African-American voters in our city."

Why? Because they voted in their own best interest?

Stokes should be proud. He helped move our racial evolution to its next stage of development -- internal disgust. Stokes and Bell, good race men to the end, disgusted their natural consistency to such a degree that it made it easy for both white and black voters to feel justified in lowering race several notches in their calculations. As Hoffman said, "It would have been much easier for me if Stokes had been the better candidate. Much."

But he wasn't -- and that just may be the best thing he could have done for his people.